Best New Hotels in the World

Every year, Travel + Leisure editors look at thousands of hotel openings and renovations around the globe with one mission in mind: what properties will truly be game changers for our readers. A great location, thoughtful design, and intuitive service are a given. What’s harder to define is a little thing called buzz-factor. A standout hotel might be adding to the fabric of a neighborhood through events, opening up entirely new destinations by their very presence, and going above and beyond in terms of excursions (helicopter safaris, anyone?) to truly transport their guests.

With that criteria in mind, we compile the It List – our annual collection of the best new and reborn properties worldwide. Following spirited in-office debate and deliberation, we whittled down our master list of hotels openings from last year to just 100 properties. From there, we tapped our global network of contributors for detailed, firsthand accounts of each. We asked them about touches like the softness of the sheets; the signature dishes at restaurants; and the views from their rooms. After carefully considering their feedback, we narrowed down the list down even further, settling on 56 stunning hotels in places as close by as our hometown of New York City and as far-flung as the African island of Madagascar.

Not every hotel is a new build. Indeed, one of our favorites this year is Paris’ Hôtel de Crillon, an 18th-century grand dame that reopened last July, under new management from Rosewood Hotels & Resorts, following a four-year closure. With a history that stretches back to when Louis XV commissioned the palace’s neoclassical façade, the hotel has gilded friezes, pattered marble, and frescoed ceilings that are classified landmarks. But now, thanks to a sensible modernization by five Paris-based designers- Chahan Minassian, Cyril Vergniol, Tristan Auer, Aline Asmar d’Amman, and Karl Lagerfeld- it also features modern accents like low-slung tubular sofas, tables inlaid with semiprecious minerals, and grey and neutral tones. The Crillon is now the defacto social hub for Paris’ bright young things.

The social scene at London hotel The Ned, the latest property from the Soho House group, is equally as vibrant, with a lobby bar that hosts regular cabaret performances and is home to no less than eight restaurants. Meanwhile, at Toronto’s Broadview Hotel, in the up-and-coming East End, a cool crowd congregates on the rooftop lounge to drink craft beers and listen to DJ-spun tunes.

Wilderness Safaris Bisate Lodge is a one-of-a-kind in that it is Rwanda’s first luxury safari accommodation. The country’s comeback in the tourism space is remarkable, given that it was embroiled in a civil war just twenty-four years ago. Bisate is part of the progress, and leading more travelers to experience this beautiful corner of the world. The six-villa ecolodge, which opened in June of 2017, organizes trekking tours into the quietest corners of Volcanoes National Park, giving visitors the rare opportunity to glimpse endangered gorillas in their natural habitat.

And while we probably won’t know the luxury that is owning your own island, Cempedak, an adults-only paradise in Indonesia’s Riau archipelago, gave us permission to pretend, if only for a few days. Here, the owner, Andrew Dixon, has taken sustainable development in the region to new levels, using native material like alang-alang grass, lava stone, and compressed bamboo to construct the curvaceous thatched villas. Secluded and luxurious, Cempedak is a grown-up hideaway perfect for those wanting to get away from it all.

But those are just a few notable mentions. The list that follows is our definitive guide to hotels that are destinations in their own right. Find your next vacation in the slideshow ahead, then share your favorites with us on social media using #TLItlist. And congrats to the winners! 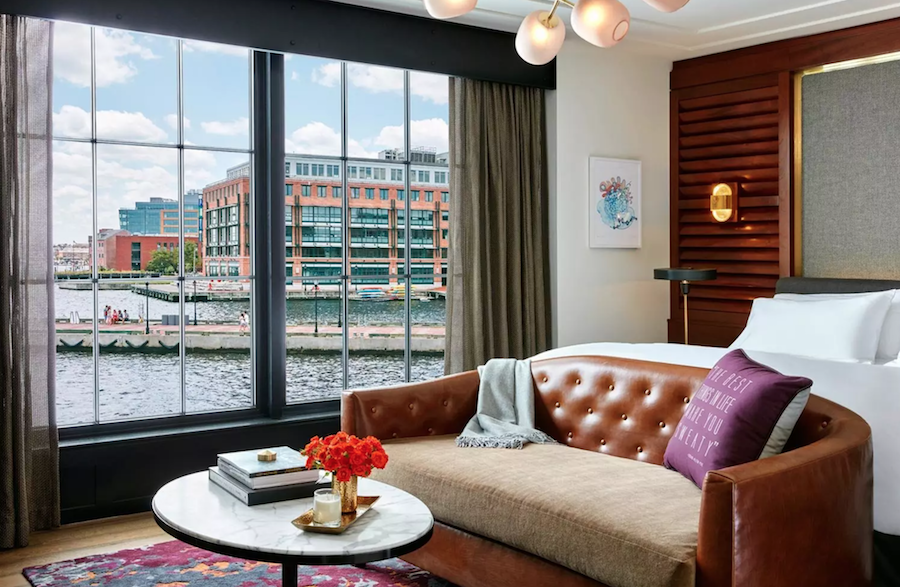 Over the course of 103 years, Recreation Pier has been, at times, a shipping facility, community center, and television set – as well as an eyesore. It seemed unthinkable that this Inner Harbor plot could be a hotel, but local businessman Kevin Plank (of Under Armour fame) and Pendry, a new, millennial-focused brand from Montage International, had the vision. Now, the Sagamore is the place to be. The 128 guest rooms resemble an old-school captain’s cabin, with plenty of brass and mahogany. The Cannon Room bar has, no surprise, a real 18th century cannon, unearthed during construction and displayed beneath the floor. At check-in, guests are given a password for a free shot of Sagamore Rye, to be added to their punch at the bar of Rec Pier Chop House, a restaurant helmed by star-chef Andrew Carmellini. But the true allure of the Sagamore is surprisingly, its location. Despite the tourist trappings downtown, Baltimore still has a working harbor, with just the right dose of grit. Staying here gets you up close to it. Doubles from $246. – Tom Austin 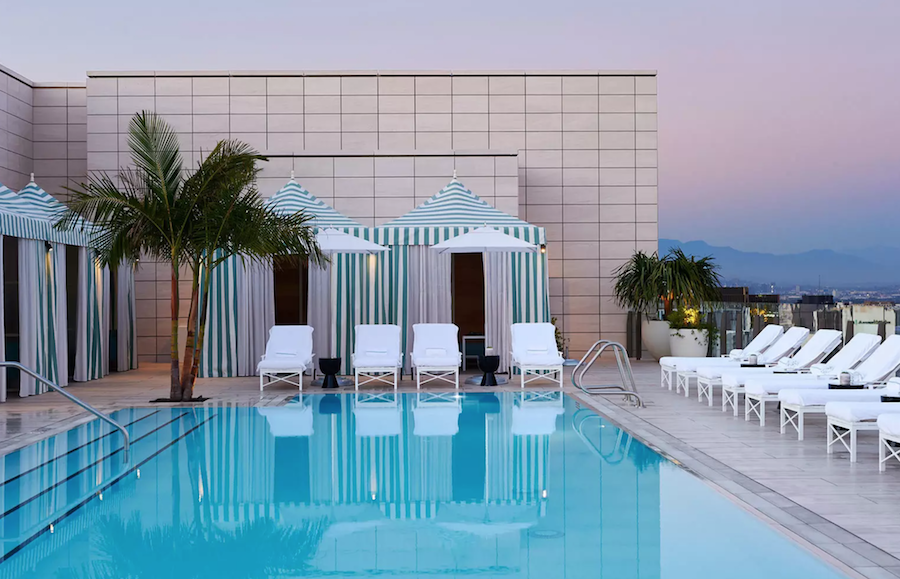 Conceived by fêted French designer Pierre-Yves Rochon, Waldorf Astoria’s first West Coast build is opulence at every turn, starting with the double-height, three-tiered lobby – all Lalique crystal, Italian marble, 22-carat gold leaf, and glossy cherry wood. The 119 rooms and 51 suites are just as over-the-top, with enormous walk-in closets, floor-to-ceiling windows, and private balconies that look out to the Hollywood Hills and beyond. For even better views, head to the expansive roof deck, where the bronzed and the beautiful pose around the sparkling saltwater pool and dine at the buzzy Jean-Georges Vongerichten eatery. The acclaimed New York-based chef oversees the hotel’s dining program, so there’s also the option to sample his California-fresh creations (think: Santa Barbara sea urchin with serrano and yuzu) in your room or at his eponymous main floor restaurant. If you need anything – be it restaurant reservations or a pickup in the Rolls Royce house car – just dial your personal concierge, whose services can be summoned via your room’s iPad. Doubles from $755. – Siobhan Reid 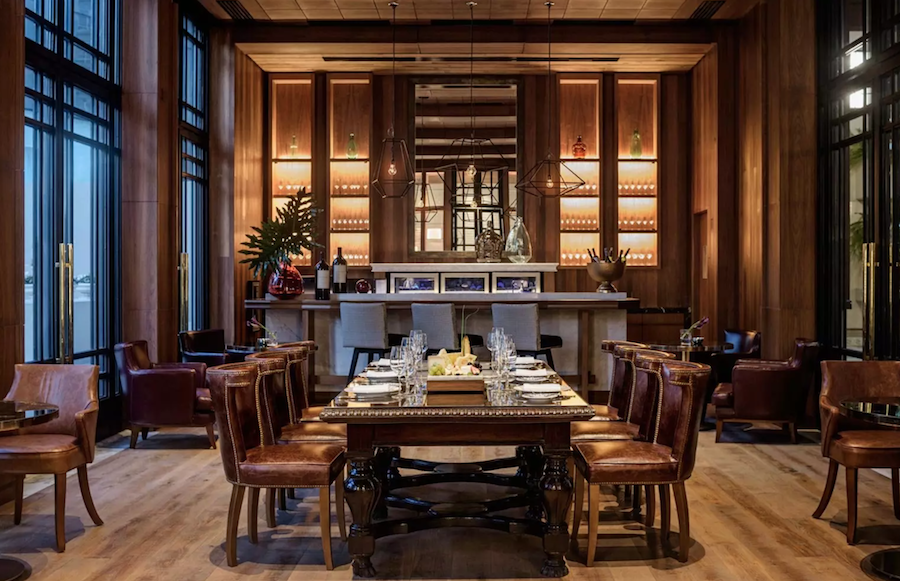 Fashion-forward neighborhoods like Recoleta may have the boutiques, but Puerto Madero – a residential enclave of wide, leafy streets and soaring skyscrapers – has the magnificent river views. It’s also becoming more popular with visitors thanks to hotels like the Icon, a sister property to the famous Alvear Palace, with a glittering social scene to match. Head for a mid-week lunch beneath the soaring glass ceiling of Sunny Yard, the light-filled lobby café, and you’ll find it packed with Portenos tucking into salads, sipping their Torrontes, and not even looking at the clock. Upstairs, the 159 rooms and suites are equally refined, with white-paneled walls; huge marble bathrooms gleaming with gold, Deco-inspired fixtures; and vintage maps above the beds. New hotels don’t often come to this city – let alone ones with a two-story spa, two pools, and a brilliantly efficient staff. Bellhops willing to lend change for cab fare always get our vote. Doubles from $440. – Jacqueline Gifford