How to See the Northern Lights in Iceland in 2020 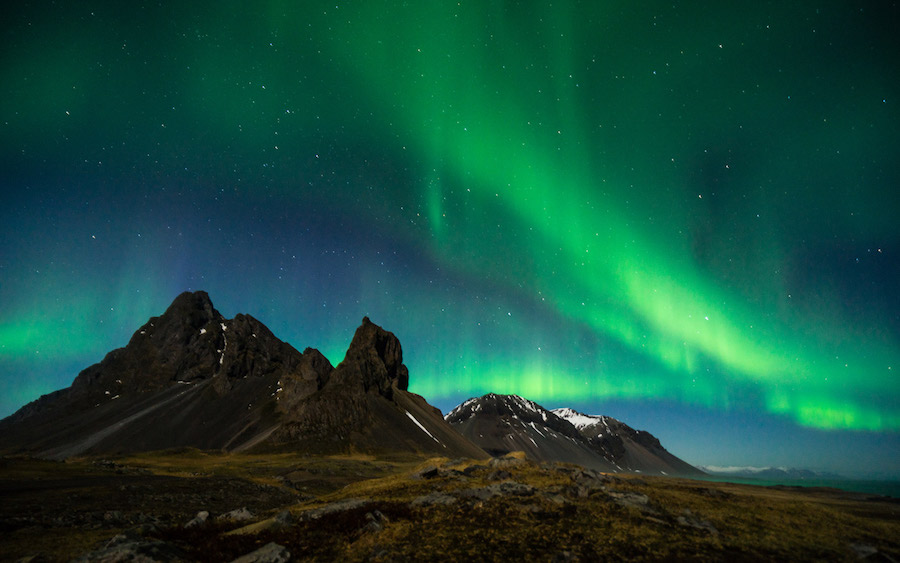 Iceland is one of the best places in the world to see the aurora borealis, or northern lights. Here, at 65° N on the southern edge of the Arctic Circle, you can see auroras almost every night (and in warmer temperatures than other viewing locations in Scandinavia).

It’s also very easy to get to a dark place in the Land of Fire and Ice, which has only 300,000 people scattered across an island that’s smaller than the state of Kentucky. Between hot spring swims and glacier hikes, your chances are high that you’ll see northern lights on your trip to Iceland — especially if you follow this guide to spotting the natural light phenomenon.

When Is the Best Time to See the Northern Lights in Iceland?

The very best chance of experiencing an auroral storm is during solar maximum when the sun is at the most active point in its 11-year cycle. The next solar maximum, however, won’t happen until about 2024. While the northern lights are more common during the solar maximum, they can actually happen at any time — and they are more frequent than many realize. If you’re in Iceland and point your camera to the north during dark, clear skies, your photo will almost always include a faint green aurora. And that can quickly become a solar storm.

The northern lights are caused by electrically charged particles from the sun smashing into Earth’s magnetic field. This “solar wind” is funneled down to the magnetic poles of the northern and southern hemispheres, creating a horseshoe shape of excited green, red, and blue particles that swivel and shape-shift over the Arctic Circle — and they happen constantly. All you need is darkness and cloud-free skies to see them. 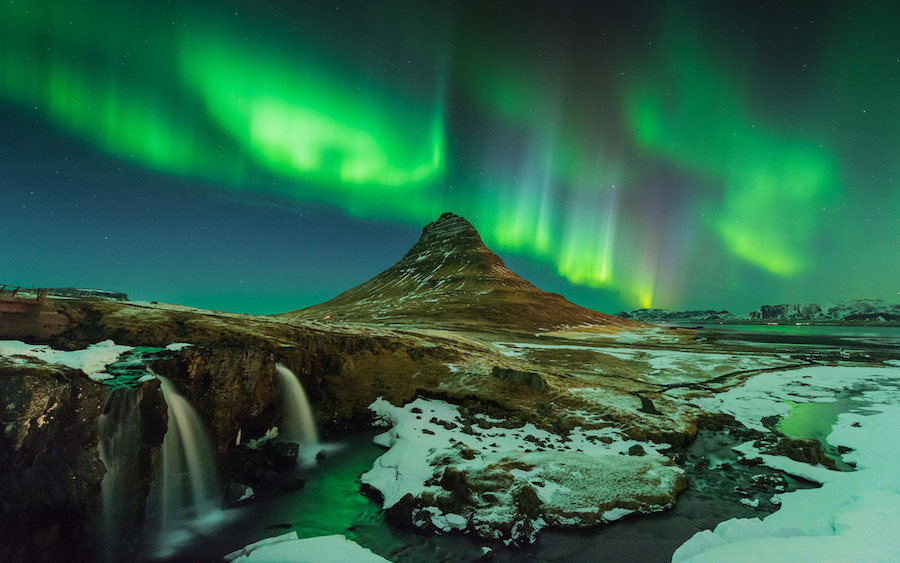 Peak viewing season for the northern lights is always September through March when the nights are long in Iceland (during the winter solstice, darkness can extend for approximately 19 hours). Even if you’re traveling to Iceland in the winter, be sure not to make the mistake of planning a northern lights hunt during a Full Moon, which can drown out the show. Arrive about five days before New Moon, and you will have a very dark week ahead, perfect for seeing the lights.

However, there’s a good reason to go to Iceland close to one of the two equinoxes of the year. Equinox means “equal night,” when there are 12 hours of daylight and 12 hours of darkness. During this time, the magnetic field of the solar wind from the sun (which causes the northern lights) faces southward relative to Earth, which can cause brighter and stronger displays. In 2020, spring equinox occurs on March 19, 2020 and autumn equinox on Sept. 22, 2020.

In which months will you have the best chance of seeing the northern lights?

The northern lights are ongoing and are visible briefly even in the months of May and August (though because it never gets properly dark in Iceland in the summer, that would be the wrong time to go looking). September through March is the peak season for northern lights viewing because the nights are longest. Just make sure you’re on the lookout between dusk and dawn because they can occur at any time. Although it can get very cold in northern Scandinavia and far north North America in winter, the Atlantic jet-stream means that Iceland is far less cold than Alaska, Canada, Finland, Norway, and Sweden. That makes it much easier to stand out in the cold watching the northern lights.

Although you can see the northern lights from the capital if they’re intense, it’s wise to plan at least a short drive away from light pollution to maximize your chances. The beautiful Thingvellir National Park is a popular place to go from Reykjavík, though the wild Reykjanes peninsula surrounding the capital city (including the famous Blue Lagoon) is also a great place to see the northern lights.

The reason to come to Hella is Hotel Ranga, which — in addition to an aurora alert service and outdoor hot tubs — features an on-site observatory with astronomers on hand to help you take full advantage of any clear skies.