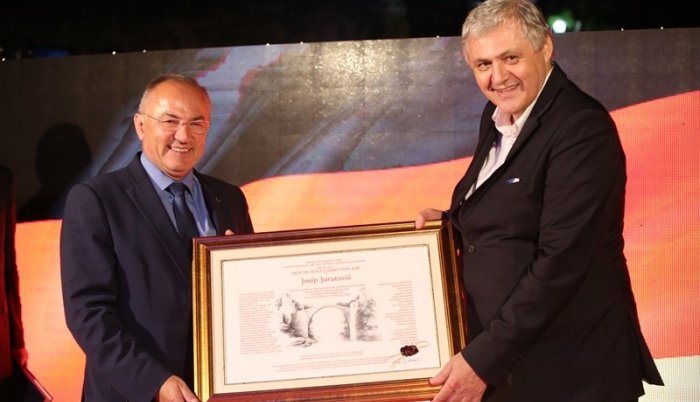 Directors of the International Institute for Middle-East and Balkan Studies (IFIMES) Assist. Prof. Dr. Zijad Bećirović and Bakhatyar Aljaf received a prestigious international award “Mostar peace connection 2018” at the event organized by the Center for Peace and Multiethnic Cooperation from Mostar. The award was handed over to them by director of the Center Safet Oručević.

The event “Mostar does not forget friends” is dedicated to marking the 14th anniversary of the renovation of the Old Bridge, which UNESCO listed in 2005 as a list of world cultural heritage.

Before the ceremony, the “Mostar Charter of Peace” was signed by the Prime Ministers of Greece and Montenegro, Alexis Tsipras and Duško Marković in the presence of Macedonian Prime Minister Zoran Zaev and the President of the Council of Ministers of Bosnia and Herzegovina Dr. Denis Zvizdić.

In addition to Bećirović and Aljaf, this year’s winners of the prestigious international recognition “Mostar Peace Connection 2018” are posthumously the first president of the International Criminal Tribunal for the former Yugoslavia (ICTY) in The Hague Antonio Casseze, the last president of the ICTY Carmel Agius, the CNN war Rapporteur Brent Sadler and Member of the German Bundestag Josip Juratović.

At the end of the ceremony, the awards “Mimar of Peace 2018” were handed out to individuals who contributed with their personal engagement that justice would be fulfilled. “Mimar of Peace 2018” are Amir Ahmić, Bosnia and Herzegovina’s ICTY liaison officer, Dženana Karup-Druško, director of the organization “Transitional Justice, Accountability and Memory”, Samir Nožić, member of the Managing Board of the Peace Center Mostar, Azra Penava, Association of women of killed soldiers of the Army of Bosnia and Herzegovina from “Vranica”, Safet Nožić, President of the Association of Camp Prisoners of Mostar and Denial Behram, President of the Diaspora Association.

At the end of the program, the prize “Mimar of peace” was handed to last year’s winner, the famous footballer Sergej Barbarez.