FACE Munich: Because I’m worth it… or not

Overcoming self-esteem, gender and age barriers in entrepreneurship:
“FACE Munich: Because I’m worth it… or not?” 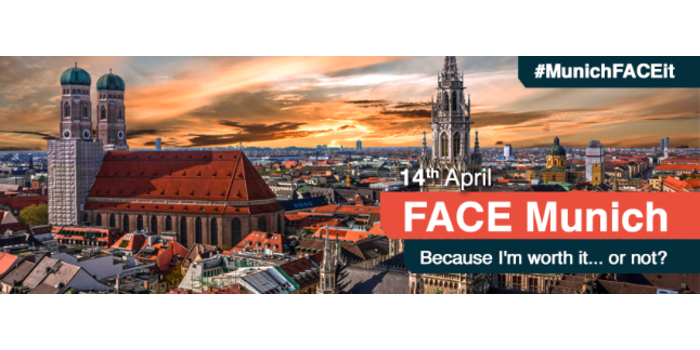 The FACE Entrepreneurship project celebrated its fifth offline event under the title ‘FACE Munich: Because I’m worth it… or not’ in its European tour which aims to promote ICT entrepreneurship by tackling the emotional side of it, Thursday, April 14th.

One of the most common fears entrepreneurs have to face when starting up is the self-perception fear, according to a research part of FACE Entrepreneurship. Founders are often afraid of not having the necessary knowledge, skills and experience to manage a startup and turn it into a reality. These doubts can lead to a decrease of the self-esteem, to a feeling of loneliness and sometimes even to consider one-self a failure, having a long-lasting psychological impact.

To help young entrepreneurs deal and overcome this fear, FACE Entrepreneurship held its fifth offline event under the title “FACE Munich: Because I’m worth it… or not? April 14th at Wayra Deutschland, Munich, in its European tour to promote ICT entrepreneurship by tackling the emotional side of it. The event consisted in an all-female panel, a workshop and a networking session with four entrepreneurship experts: Elizabete Dikmane, Freya Oehle, Natalia Anna Irene Rizzi and Jose Antonio Morales.

Being a young woman in ICT entrepreneurship: advantage or challenge?

During the panel, a part of the discussion revolved around gender. It was made clear that a team with both male and female presence is stronger, although it doesn’t happen as often as it should. “From the 30 startups I work with, only 2 have been founded by women,” pointed out Natalia Anna Irene Rizzi, co-organizer of Startup Europe Week Florence.

Whether being a young woman is an advantage or a disadvantage to start up your own company was also discussed, getting to the conclusion that it can be more difficult on the one hand, but an asset on the other. Freya Oehle, founder of Spottster highlighted that there are still differences on the way than men and women do businesses and negotiate deals. “Men have a huge advantage: they can talk with investors while sitting in a bar drinking a lot of beer, and that is a plus. They can have a party with investors, they can have private time with them, and that’s usually when deals get really interesting. However, as a girl, sitting there with two or three elderly investors drinking a lot or dancing around may not be the best to be taken serious. So you have to do all that in the office and conference rooms, which are really stiffly and way more complex than at the bar,” she said. On the other hand, this German entrepreneur remarked that there are advantages of being a women in entrepreneurship too, “Women are a rare species so, if you are very self-confident and you know what you are talking about, it can be a lot easier at the moment as a female entrepreneur because everyone pays more attention to you. Media, investors, public foundations would love you if you are woman.”

Elizabete Dikmane, co-founder of KikLearn, had a similar opinion. “When I went to the Tech Crunch Hackathon, there were 75 teams presenting, and we were only 3 girls, so this was an advantage because people notice you more”, she explained.

Age was another topic lengthily discussed. Elizabete confessed that, given her young age, she sometimes tried to avoid mentioning it, but she also argues that “it is not about the age, it is about the energy and the will you have to do something. You can learn different things, but you can’t change your passion for things.” For Freya, age doesn’t matter “as soon as you are competent, straight forward and self-confident.” One of the attendees asked when is the best time to startup and all the speakers agreed that the best one is right now. “You don’t have to wait to be older or better educated. People are surprisingly open and supportive,” argued Elizabete. Freya explained that also from a financial perspective, now it’s a very good moment to start up. “Interest rates are negative, so you can get credit easily and, in terms of raising money, this will be one of the best years ahead for inversions.”