A soothing waterfall of Bohemian glass 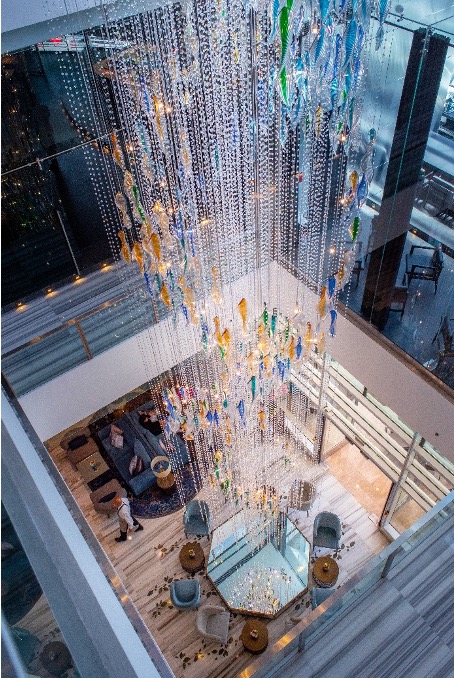 Twirl is a chandelier descending through the hotel’s multiple floors, with glass components pooling on a ground floor foyer table. Like a waterfall flowing through one of Mexico’s famous ancient sink-holes – the cenotes – this waterfall of glass refreshes the weary traveler and lets them bask in a pool of light. It consists of 358 glass components made of fine Bohemian glass, which play in many colorful hues and shimmer on the hotel’s walls. In one of the hottest capitals in the world, such a refreshing sensation can make all the difference.

LASVIT’s St. Regis installation is a direct reference to one of the most curious natural formations ever recorded – cenotes, which the ancient Maya used as a sacred place. “I search for inspiration in nature and its morphology. My work has an abstract form which opens space for imagination and functions as a window into our interior, into our subconscious,” says the LASVIT designer Katarína Kudějová Fulínová. Inspired by the power of nature, the cascading waterfall of glass gives each visitor of the most populous city in North America a moment of quiet inspiration. With cutting edge modern glassmaking technology, LASVIT has created a natural wonder right inside one of the most luxurious hotels in the city. 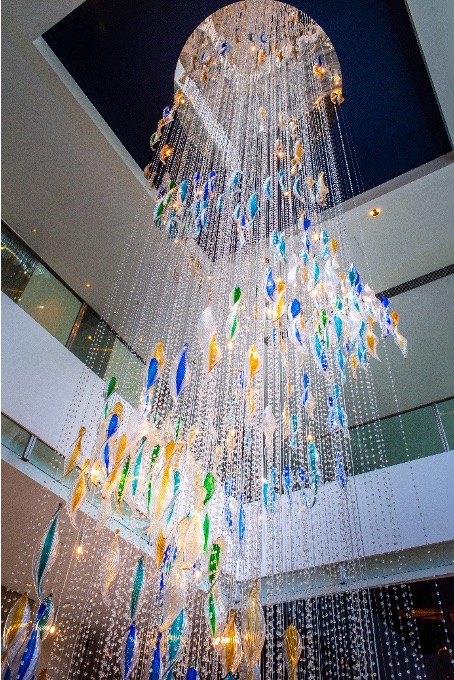 Surrounded by emblematic landmarks, prominent museums, exclusive art galleries, and boutiques, the St. Regis Mexico City places guests at the epicenter of an outstanding legacy. Its 31 floors offer a view of the city skyline and the area’s most iconic landmarks: the Chapultepec Castle, Diana The Huntress and the Angel of Independence. Old meets new in this bustling global hub.

You can find images of the St. Regis Mexico project here.

LASVIT is a Czech-based designer and manufacturer of bespoke lighting installations and glass objects. Since its foundation in 2007, the company’s mission has been to inspire the world with the beauty of Bohemian glass.

LASVIT is a young company, yet it builds on the long history of glassmaking in Northern Bohemia. The founder of LASVIT, Leon Jakimič, has great respect for the glassmaking tradition, but also enthusiasm for cutting-edge design and modern technologies. Tailor-made lighting pieces are entangled with the genius loci of each specific place. We create storytelling designs.

LASVIT has been cooperating with many of today’s design stars and has become an influential company that is often the first step in the budding career of young and talented designers – the design stars of tomorrow. The company has already decorated more than 2 000 unique places all over the world.

Since 2011, the creative style has been set by designer Maxim Velčovský. Their original design approach won LASVIT the “design Oscar” at Salone del Mobile 2018.

LASVIT illuminates the world with inspiration, yet the source comes straight from the homeland. The company’s headquarters are in the heart of Northern Bohemia, and part of the complex is also a glass house – the metaphorical “lighthouse of glassmaking,” illuminating the whole region and beyond.