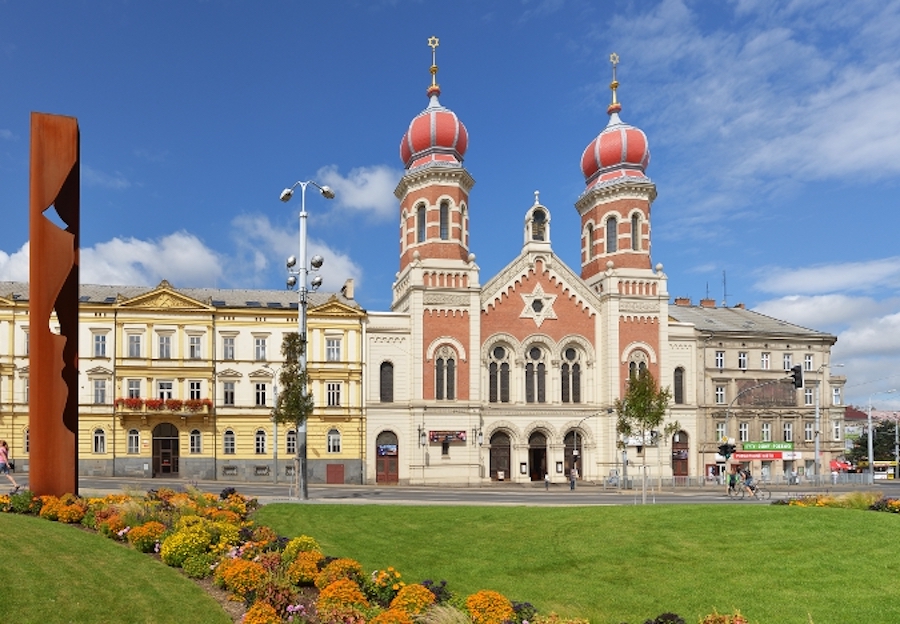 The Great Synagogue in Pilsen, has opened its door to the public after a three-year renovation. The monumental building, which is the second biggest synagogue in Europe and one of the five biggest in the world, opened last Sunday, just a few days before the start of Passover, with a Torah scroll being carried inside under a velvet canopy.

I spoke to Barbora Freund of the Pilsen Jewish community to find out more about the history of the Great Synagogue and I started by asking her what triggered its construction back 1888:

“The Jewish community started to grow exponentially after the reforms introduced by Josef II. Before that, Jews were not allowed to settle in Pilsen, but with these reforms, they were allowed to come back and build their houses here.

“First, they built the Old Synagogue, but it soon wasn’t big enough for the growing community, so a plan was conceived to build this big synagogue that would accommodate the whole Jewish community.

“The second reason was that the Jewish community was quite rich and it was a matter of pride. However, already at the time when it was built, it was, let’s say, over-dimensioned.

“At the time when the synagogue was built, the Pilsen Jewish community had around 1,200 members and before the war, it had around 3,000 members.”

What do we know about the history of the synagogue? I know it was originally designed by a Viennese architect, but his plan wasn’t used. Is it true that it wasn’t approved because it would outshine the local church?

“I would say that this is more of an urban legend. The real reason why the project of Max Fleischer wasn’t carried out was that it was simply too expensive.

“Originally the synagogue was supposed to be neo-Gothic and the towers were meant to be 65 metres high. But in the end, a different and a cheaper plan was chosen.”

“Exactly. But I would like to say one more thing concerning the original project. It actually didn’t completely disappear. It was eventually carried out, although in a slightly modified and smaller version, in the town of České Budějovice. Unfortunately, that synagogue was torn down during the Second World War.”

So who was the author of the current design?

“It was Emanuel Klotz, who originally co-worked with Max Fleischer. And why did he choose the Moorish-Romanesque style? That’s because it was in fashion at the time. It was very typical for the turn of the 19th and 20th centuries for synagogues to be built in the Romanesque style.

“There are many examples, such as the Dohány Synagogue in Budapest, which is the largest one in Europe, or the Jerusalem and Spanish synagogues in Prague. So it was simply a fashion at the time.”

How come the Pilsen synagogue wasn’t torn down during WWII?

“Let me answer by turning the question around. Why should it be torn down? Pilsen was not part of the Sudetenland. We were part of the Protectorate Bohemia and Moravia. Synagogues in the Sudetenland were destroyed during Kristallnacht, but we weren’t occupied at the time in Central Bohemia.