“In a civilised country, THE STRONGER HELP THE WEAKER” 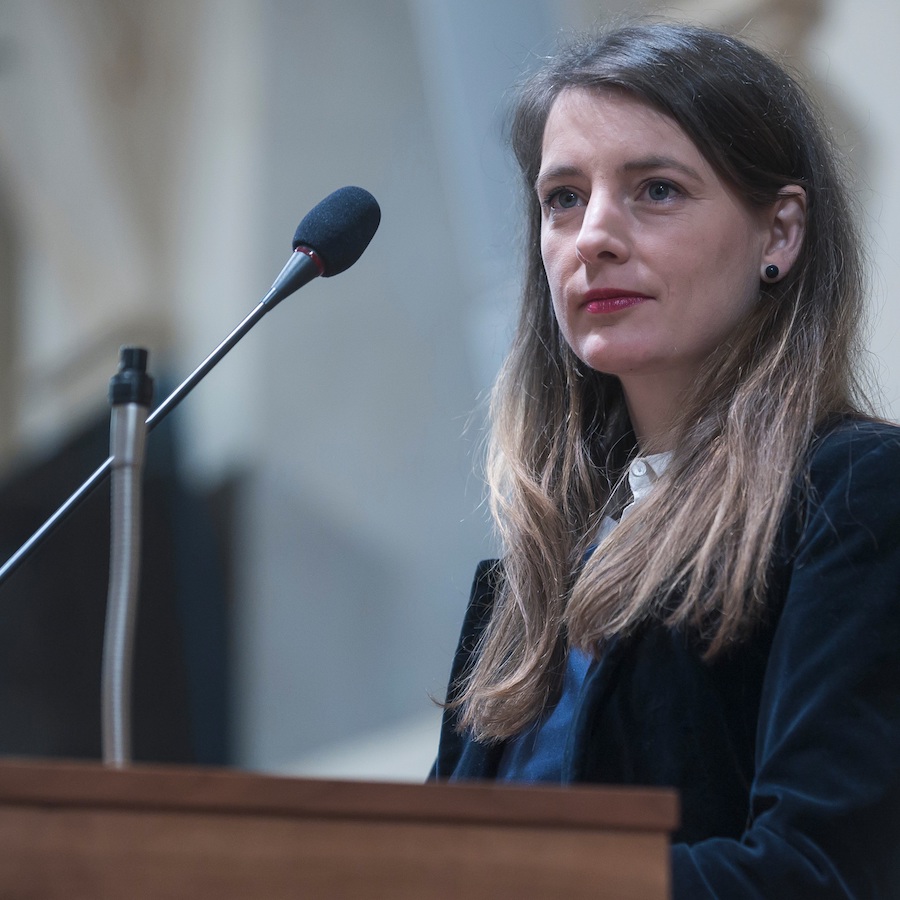 Adéla Šípová was without doubt one of the most prominent people in last year’s Senate elections, as an independent for the Piráti (Pirates) party. She earned the nickname of the “pirate rocket” after defeating political matadors such as Jiří Dienstbier from ČSSD and Petr Bendl from ODS. She sees herself as a senator, a lawyer, a mother of five, and a cyclist. She was born in Vlašim in 1980 and was elected to the Senate in October 2020, shortly after her fortieth birthday. As a child, she spent a year at school in Sydney; this deeply affected her view of diversity. This experience taught her to “be aware of the differences in different languages, nations, and cultures, and know how to respect them and let them enrich you”. She moved to Kladno, and it is in this constituency that she was elected. Adéla Šípová studied at the Faculty of Law at Charles University and has worked at a number of law firms. She now works as a freelance lawyer and favours cases involving normal people over those of corporate law. She has set up several non-profit organisations and supports the development of civic activity, bringing up her children in a similar vein.

I quote from her website: “The future of our country is important to me. For example, not just for democracy to remain here, but for it to become even stronger. I believe in the ability of society to keep on finding new starting points. I don’t like stagnating in a dead end, and so I have always been active in social life.”

Her Facebook page shares her observations of working in the Senate and comments on frequently asked questions or remarks, all in a light-hearted way. Remarks, for example, about harmonisation. I recommend following her, and would suggest that fellow journalists think about “gender-based bias” in journalism. And everyone else about the areas in which they work.

Take Adéla Šípová’s words about helping other women to heart. Another name you are sure to hear in the future is that of Klára Kocmanová, currently assistant to the senator, but leading Piráti in the Central Bohemia Region in the upcoming elections to the Chamber of Deputies.

The senator responded to the request for an interview right away. In light of the pandemic, the interview was given online.

Describe your feelings as you went into the year 2021.

Pleased that I can look forward to interesting work in the Senate. I set myself some challenges. I am curious to see how many I manage to achieve. At the same time, though, I am a little worried about the economy, because small businesses are particularly at risk. Not to mention artists, who have been practically left out in the cold. I am trying to support these people in my own way by buying from smaller retailers or contributing to their alternative projects. I believe in human creativity, however, and that the crisis can move us forward and give us the opportunity to reassess our priorities. And of course I am looking forward to seeing how the children come along. It fills me with happiness and pride. For instance, when I hear my older daughters’ online lessons or see the computer skills of the smaller children in distance learning.

You have three months of work in the Senate behind you – what came as a pleasant surprise, and what was not quite as pleasant?

The slightly chaotic preparation of sessions is not that pleasant. It’s caused by the fact that senators simply have to deal with everything themselves. It takes some time to get used to how it works, which nobody has actually explained that much to me. So I am learning the staff culture as I go along. I was, after all, used to the more established inner workings of a law firm. I am, however, used to changes of rhythm from beforehand, so I can cope with that well. Neither is the servile treatment sometimes given to senators all that pleasant. I’m not into that. I have been pleasantly surprised by the nice women senators and the friendly and funny spirit of the plenary.

You are a member of the Committee on Social Policy and one of your priorities is to help people undergoing enforcement procedure. The pandemic has seen the position of such people deteriorate very quickly. What can we do to stop the gap widening?

This is something that is very important to me. One of the challenges mentioned above is to introduce local “jurisdiction” for enforcement officers, so that one debtor has only one enforcement officer even if he or she has multiple debts. That enforcement officer will not be appointed by the creditor, but according to pre-set rules. This will have an enormous impact on increasing the ethical recovery of debts and will at the same time help make enforcement more effective. This principle is, after all, of benefit to everyone and removes the elements of gross unfairness from enforcement procedure. Only for gigantic enforcement authorities will it bring a streamlining of their apparatus.

I will also ask you about your work on the Standing Senate Commission Water-Drought. What is your view on this issue?

I am fundamentally dealing with two things in this area. First, that we manage our water better. We need to return to the fundamental principles of water management – water is something we cannot replace. We need to retain water better in the landscape, but not in tanks. We have to use natural systems so that drought does not affect us as much. I am working in this matter with experts, who have come up with what are actually relatively simple solutions, but which need to be applied nationwide.

The second issue is water supply management. We in the Kladno area have a bit of a problem with this. The infrastructure was built under communism, and looks it. I plan to get to know the situation in person because a relatively high number of people from my constituency suffer from this problem.

Last year, the Senate became the symbol of guardian of the Constitution, and made a mark on foreign policy. When it is possible to travel again, where are you planning to go on business?

I’m not really planning on going anywhere at the moment. Although, on second thought, I do actually have something planned. I am able to find beauty right round the corner. Last year, for example, I was completely taken with the Ploskov avenue of chestnut trees, which I have about 5 km from home. I didn’t know about it and discovered it on one of my cycling tours. I am adventurous by nature, I like heading out into the world. I also realise, though, that heavy tourism robs the locals of their identity, which is then gradually lost. So I don’t want to just take experiences from them: I want to give something as well. I am currently seriously thinking about going to Tanzania as a volunteer for two weeks. I have been invited by people I know, who organise help for orphans there. If my workload allows it, I will go there for a few days to help out.

I have read your witty posts about “harmonisation” on social networks. I don’t want to ask you about this issue, because journalists don’t ask men in high positions about it either. I will ask you instead how to support greater representation for women in politics … and how to bring male colleagues round to this opinion.

My view is that we simply have to talk more about this issue and actively think about it more. Women have just as good qualities as men. In fact, I see that they often have greater humility and often greater appreciation of the position that they deserve. I myself try to take the initiative in contacting women and supporting them in their activities. And sometimes it’s not that hard. I have now been in touch with several women and girls in this way and supported them in political involvement or elsewhere. I have actually been doing it intuitively all my life. I help some set up an organisation or perhaps in their candidature for a certain position. And one reason I do it is possibly because I have four daughters. I look at all of my children and see where their talents lie. And when I see that she or he is interested in something or enjoys something, I think about how to support them. After all, we have to support women (and men of course) from childhood so that they can gain the self-confidence they need. It is almost always the case that when I recommend to one of my girlfriends something they would be good at, they are always very surprised to not have thought of it themselves. Observing people, looking for the treasures in them and putting a name to them is something of a hobby for me. And how to support men in becoming aware of women’s issues? It’s not easy with the older generation; you won’t have much success unless they are genuinely enlightened men. We are weighed down by upbringing and stereotypes of strong male breadwinners. It is somewhat easier with the younger generation, though. Young fathers are able to imagine their daughters going off in search of their fortune, doing what they want. So my answer is that I actually go about everything through the children a little. We subconsciously do everything because of them anyway.

To close, I would just ask you for a few words for the readers of Czech and Slovak Leaders Magazine…

I would like to encourage your readers to have good thoughts. I think we have an interesting year ahead of us, and a lot of hard work, but if we stay open to new thoughts and solutions, then I am not worried about us managing this crisis. We all need to look after each other. Nobody should be left to one side, alone and going unnoticed.