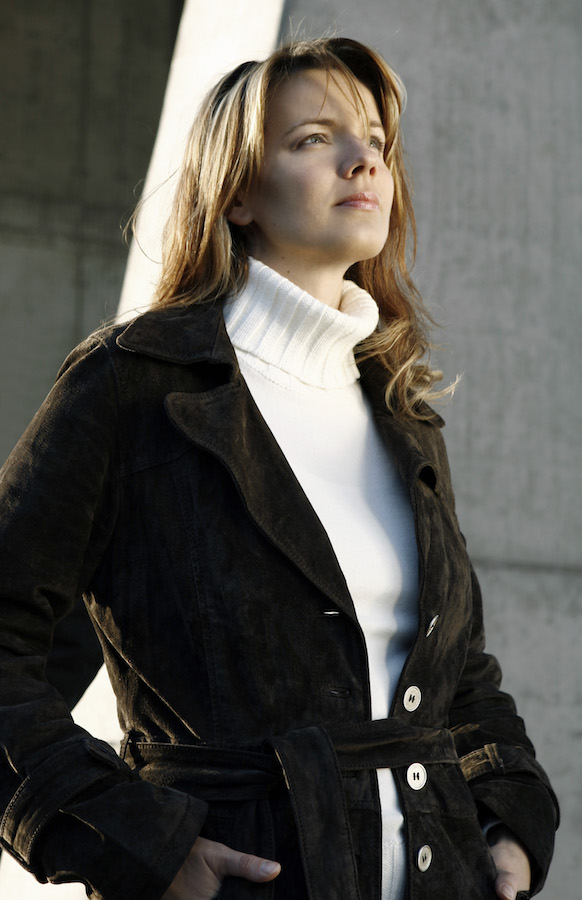 Andrea Klimko, member of the Royal Institute of British Architects

Andrea Klimko considers herself a truly “Czechoslovakian”. She was born in Czechoslovakia, graduated as an architect from the Slovak Technical University in Bratislava, Slovakia, with subsequent studies in Vienna, Austria. Currently, she is working in three cities, London, Prague and Bratislava. She devotes herself in architecture for more then 18 years, running her own studio Andrea Klimko. In reality, this translates into designing more than 150 projects. Andrea Klimko is not only an architect, she is also a passionate urban traveler. She loves both architecture and urban design. Having visited 35 countries in Europe, Asia, America and Africa, she also writes a blog helping to discover the culture in architecture, spirit of the cities and beauty of the cultural diversity and hoping to encourage others to seek travel experience as well.

Andrea Klimko is a member of the Royal Institute of British Architects. Having 185 years of existence, the institution is considered the arbiter of the world-class architecture. The elite professional institution selects its members purely on the quality of their work. Andrea is also an active member of Czech and Slovak Chambers of Architects and recently she joined American Institute of Architects.

On top of that, Andrea and I share the same passion about supporting women. Andrea is the founder of the non-profit professional organization Women Architects, aiming to encourage women interests in architecture and career development.

Andrea, you have recently returned from the United States. You travelled all over the East Coast, one of the reasons was to attend a conference in New York, as a new member of the American Institute of Architects. What were your impressions?

It was my first visit to New York and my expectations were fulfilled. Particularly Manhattan and Lower Manhattan also known as Downtown. I like the area around the World Trade Center and design of the newly constructed buildings like Oculus. I was able to enjoy the skyline at the sunset from the One World Observatory. I made sure to visit all the elevated scenic places. I will definitely come back to the city that never sleeps. As you mentioned in my introduction, I am a urban traveler. I do not mind crowded, busy places. I like large cities. For me, people represent life. As we live in a virtual world, people often tend to make impressions based on photos of the cities and architecture found on internet. Even the best picture cannot reveal the complete feeling from a particular place. Is it a city friendly for pedestrians and those travelling by public transport? Is it a city that energizes people or the one that drains them? I enjoy experiencing and discovering the haptic dimension of architecture. Being born under the communist regime, being forced to graduate from obligatory Russian language, travelling for me is a substitute of learning, enables me to study languages and cultures which I could not discover due to the fact of spending my adolescent years behind the Iron Curtain. I learned English by myself 20 years after my high school because I have strong motivation to understand, to read and to speak with people in English.

You studied in Bratislava, then in Austria and Germany. One of your offices is in London. Your projects are in more countries. How do you define yourself?

I do not like to put myself in a box. I like to consider myself European. I truly enjoy the ability to travel without borders. I enjoy the comfort of being able to pay in Euro currency. The European Union is a wonderful project, I leave aside politics and administration. European culture and history that can be felt from each city amazes me.

I would like to elaborate on the conference theme Blueprint for Better Cities. How do you perceive the two cities that are the closest to your heart, Prague and Bratislava?

Being born in Czechoslovakia, I still have strong feelings about the fact that the two countries split up without people having a say in a referendum. It was a decision made by politicians. Therefore, I perceive Czechoslovakia as one entity. Since my childhood, I learned Czech, as I was used to watching Czech fairy tales and movies. Prague is a beautiful city, it has its special place in Europe, not only thanks to historical buildings but also some modern buildings deserving attention have been built recently. Prague is not only bigger but also more international city compared to Bratislava, you hear English being spoken on the streets quite frequently. Prague also attracts many international students. The sheer size of the market brings more opportunities. Bratislava is a smaller city, but it has changed considerably. There is an enormous amount of construction going on. Some quarters are almost impossible to recognize.

By the way, I am asked this question frequently. I personally do not like comparing or contrasting these two cities, as I like to think about them as two cities belonging to one country.

When you talk about your work, you say the following. “The philosophy of my work is to find the poetic language in architecture, an interface connection between poetry and reality. I like to feel pure tectonic, dynamic context and physical presence.” How was your work impacted by the fact that you started to work in the post-socialism period? The 1990s were quite unique.

I remember this period as a period of scarcity of work for architects. There was a chaos and nontransparent situation on the market. It was hard even to study architecture as a discipline, old textbooks were the only resource available we had. Imagine, no internet! At that time, there was not even a possibility of an internship abroad. Imagine that there were not even student exchanges such as Erasmus available. I remember I wanted to study Spanish and the lessons were cancelled due to the lack of students. I felt the vacuum of this period. I missed the opportunity to experience the feeling of not only designing, but also seeing the construction process. The changes you have to make as an architect during the construction represent a unique learning experience. Architecture and construction go hand in hand and both are essential particularly for a young architect to experience.

Speaking about the challenging period, what was the impulse for you to become an architect?

At first, I wanted to study either philosophy or psychology. The mystery of a human mind has always intrigued me. I am glad that both disciplines have remained areas of my interest until nowadays. I still manage to read a lot. Next to reading, I have always enjoyed drawing. I decided to go to Bratislava to study architecture at Slovak Technical University (STU) and then continue at Technical University in Vienna. I liked the fact that the result of an architect’s creation is represented by a visible object / building. I enjoy being able to bring the abstract visions to life. I have a personal and close relationship to each of my projects, they are my babies. The element of making the specific object was the element I missed in humanities. You can see that my notion was quite a naive one.

You are a very successful female architect in the field that is traditionally considered a domain of men. On top of that, you are also a mother of a son. Zaha Hadid or Eva Jiřičná, to name some of the world most famous architects, do not have children. What was the moment you realized that you are different? In 2012, you were nominated for a Crystal Wing Award, not only as the first woman architect but also as the youngest one. Next to managing a studio, you are also invited to be a jury member or a keynote speaker.

I have never thought about being special. I have simply tried to create the best architecture. I like what I do. I concentrate on my work and the rest is bonus. There are two types of architecture: the good one and not so good one. It does not depend whether it is created by a man or a woman. That is how I see it. For a long time, I was hesitating whether to initiate any group with regards to women architects. If one was to achieve something, then he or she should dedicate himself or herself to it. In Europe, we have conditions for both genders to be successful. However, the phenomenon of leaking pipeline occurs also in the field of architecture. We have about 50% of female graduates from architecture, only about 5% make it to top positions or start their studio on their own, without a male business partner. I do not want to complain that women have more challenging position. I believe that men and women can both defend their positions. This being said, I admit I sometimes find tiring being a mother, a wife and an architect at the same time. The work of an architect is a demanding one, particularly due to combination of high level of stress and deadlines. I dedicate myself fully to the profession, often sacrificing either time for myself or for my family. Often, people tend to think that the low number of top women architects is due to the motherhood. I think that such perception touches only superficial layer of the problem. I see the attitude as the main challenge. Women are simply much less risk averse than men. It is hard to live permanently in uncertainty while supporting a studio. Will I have enough clients? Will my projects succeed? Will I be able to pay all people working for me? I also had to get used to the uncertainty. I tend to challenge myself and I know that learning happens outside the comfort zone. I learned out of the comfort zone quite often. Unless you try, you never know. I never understand people who do not try new things but have an expert negative opinion on most issues. I borrowed my life motto from Marc Twain: Travel is fatal to prejudice, bigotry and narrow-mindedness and many of our people need it sorely on these accounts.

How do you define success?

For me, success lies in finding a balance among three elements dear to me – my family, work and my personal development and integrity. We often hear attributes such as money, growth and fame linked to the success. Hardly anyone recognizes that for a woman, a success can be upbringing a child. Upbringing children who will become happy, fulfilled and stable. Individuals who will continuously develop themselves. Such aspect of motherhood is enormous gift for the society. Today, such result is considered normal, even ordinary. But it is not, even a modern motherhood needs a lot of energy, time and effort involved. I enjoy my work but I do not measure it by ordinary criteria, such as budget size, square meters or number of awards. The inner quality is what matters. Let us aim for the success measured by the quality of authentic conversations, new relationships, new journeys taken and new horizons experienced. I just wish to remain healthy and active, so I can continue working on inspiring projects. It does not depend only on me but also on clients that will give me the opportunity. My aim is to create projects that will make others happy. Architecture can contribute a lot to improving our lives by making our cities, buildings and public spaces appealing and enriching.