Celebration of 20 years of Skål

The Austrian Heinz Reigl is one of the pioneers of foreign businesses in the Czech Republic, having set his foot on this uncharted ground in 1990, right after the revolution. Looking at his rich experience in leading positions, it comes as no surprise that he loves to see tangible results. This applies no less to professional business networks as he soon understood that they have the potential to be more than just prestigious “talking shops” for the elite. For seven years now, Reigl has presided over the Prague Skål Club. Under his leadership, Skål has evolved to be a vanguard of the professional networks in Prague. 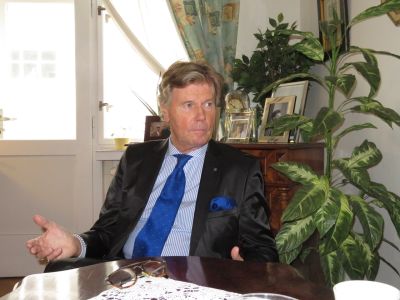 The tourism platform Skål developed as the outcome of a business trip. In 1934, on the occasion of a new air route to Scandinavia, a group of Frenchmen went to visit their colleagues – in a time when networking rarely extended beyond national borders. Among all the foreign languages heard during the trip, remarkably, one particular word kept sticking: skål. The equivalent of the English “cheers” and the Czech “nazdraví”  became the name of a novel network, the first of its kind in tourism.
Over 80 years later, Skål is still the most important international network for leading tourism professionals. In most other respects, however, times have changed a lot. Communication and exchange are now global, from South America to Asia. As times changed, so did the concept of the organization. “Initially, Skål was a rather elitist group of CEOs, as we would call them today,” explains Reigl who joined the club 13 years ago. Members used to meet in order to eat and to chat. Only business topics and politics were off-limits. As a new member, however, Reigl quickly understood that Skål would sooner or later dissolve into a dusty outdated relic, incapable of attracting young professionals. Membership would drop and the network’s future would be uncertain.

Aware of that danger and not afraid to challenge traditions, Reigl, as the club’s new president, was able to change Skål’s course. “We have managed to win many young people. This had been one of the key problems that the club was facing.” It is not without pride that Reigl can now feel a fresh momentum that is considerably owing to Prague’s contribution, acting as one of the vanguards on an international level. The club’s slogan is now “doing business among friends.”

Skål Prague is celebrating its 20th anniversary this year. Today, the club has 72 full members, fondly called “skålleagues,” as well as 18 members of Young Skål, where students have the rare chance to meet and mingle with top industry leaders on an equal level. Reigl praises the club’s cooperation with the college Vysoká Škola Obchodní as a vital source for students of tourism.

The development in Prague is exceptionally dynamic because the city’s high number of hotels inevitably leads to a certain degree of fluctuation in the club’s members. Whenever a hotel director is relocated to another country, Reigl springs into action, trying to win his or her successor. Skål’s members in Prague stem from a variety of countries, making English the club’s “lingua franca,” or common language.

Modernization has also affected the profile of Skål members. Today, tourism is perceived in broader terms than before. Thus, an IT provider who produces software for hotels fits seamlessly into the scope of the club’s members. In the spirit of opening doors, members from outside of Prague are also welcome. However, sufficient English skills are required for club membership. “A condition that regrettably is not met by all representatives of Czech tourism businesses,” Reigl says.

Even though Skål take pains to avoid falling back into its former elitist attitudes, he points out the need for Skål’s members to be in positions where they can make decisions in their professional environments. Otherwise, the entire platform would lose its meaning and relevance. The times of superficial “talking shops” are gone, and members are very much invited to share their professional experiences and talk about business. Skål invites high-ranking guest speakers to its regular meetings and seeks collaboration with media, such as PTV Media (www.prague.tv, www.praguemonitor.com, www.mansprichtdeutsch.cz). The club is increasingly understanding its own potential as a special interest group, whose voice should be heard.

Reigl is trying to create synergies with other networks and is not scared to approach politicians and diplomats in order to positively influence conditions for tourism. Even though direct involvement in politics is not on his agenda, he is fully aware that tourism is not possible without a conducive political climate. As an Austrian, he knows about the benefits of tourism for national economy. He regrets, however, that Czech politicians often perceive tourism as a blessing that came from nowhere and that thrives almost on its own. Even Prague’s attractiveness as a city doesn’t suffice to make it a flourishing tourist destination on its own.

Reigl depends on international networking to broaden Czech horizons and improve Skål’s work in Prague. “Particularly younger Czechs are now more open to change and to learning from others,” he says. He attributes this positive development mainly to increased international exchange and takes it as a confirmation of his chosen strategy for Skål in Prague.