“Let Us Look for Answers Together” 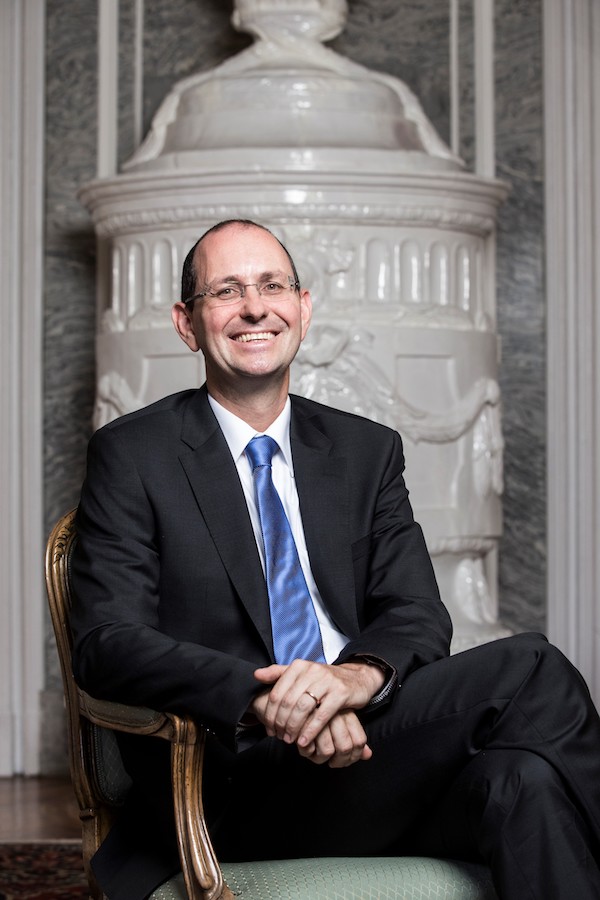 Dr. Christoph Israng, current German Ambassador to the Czech Republic, has served in Prague since August 2017. He came to the Czech Republic directly from his previous posting at The Hague, where he represented Germany at the Organization for the Prohibition of Chemical Weapons. Dr. Israng is quite familiar with the Central and Eastern Europe region, he served for eight years at the Office of German Chancellor as the Head of Department for Central, Eastern, Southeastern Europe, Caucasus and Central Asia. The fact that someone so close to Angela Merkel was appointed to serve in the Czech Republic underlines not only the reality that the Czech-German relations are the best in history, but underscores also the ambition that they should be further fostered.

Coming to the Lobkowicz palace and interviewing the German Ambassador was a special moment for me. I am a Czech-German Young Professionals Program alumni and thanks to the initiative “Sprechtime”, I learned basic German. The Lobkowicz palace, being one of the grandest and most impressive Baroque palaces in Prague, represents a place where history was lived and written throughout the centuries. Ludwig van Beethoven and Carl Maria von Weber, who were supported by the Lobkowicz family, are said to have given concerts in the central Domed Hall. The Palace displays splendid frescos, Gobelin tapestries and paintings.

The Domed Hall still houses concerts, conferences and receptions. I am proud to belong to the Velvet Revolution generation, so I always make sure to visit the so-called “Genscher-Balcony”, where Foreign Minister Hans-Dietrich Genscher addressed East Germans fleeing via the Embassy on 30th September 1989. At that time, the Embassy gave refuge to approximately 4000 Eastern German citizens. The statement by Genscher has become probably one of the most famous unfinished sentences in modern German history: “We have come here to inform you that today your departure…”. The rest of the sentence was impossible to be heard as the crowds started to cheer. This was one of the occasions that cleared the way for the fall of the Berlin Wall on 9th November 1989 and then only eight more days until the beginning of the Czechoslovak Velvet Revolution in 1989.

Mr. Ambassador, what is the current common theme of the Czech-German relations? I know that they are often described as the best in history, but let’s go beyond the headlines.

I will start by highlighting all the similarities between our two countries. They are both located in the center of Europe and we are surrounded by friends. Both countries are also in the center of the European Union, thus we have to care about the future of the EU. Our economies are also similar. We share not only the industrial specialization but also the industrial entrepreneurial spirit. We have also similar social developments. Both countries are doing economically well. At the same time, we should be aware of the challenges ahead, we have similar discussions going on in both societies. I can mention the Industry 4.0. as one example. Let us not concentrate only on the technological aspects and innovation, but also on the sociological ones as to the future of functioning of our society. As both countries are dependent on natural resources, it is the human being that makes the difference to our economies. The Czech Republic and Germany can start looking for answers together.

I have mentioned in the introduction that you are not new to the region. But coming here, living and working here, what was the biggest surprise?

The biggest surprise came when I met people that survived the most brutal violence committed by Germans. The way they interacted with me and my colleagues, the fact that they were open, friendly and in certain ways optimistic. These personal encounters were truly very moving. History is an important base for understanding the present and designing the future.

These moments must be rewarding for you not only personally, but also professionally, as a diplomat. You get to see that the Czech-German process of reconciliation has worked quite well.

We are not at the end yet. But there definitely have been many positive steps. Many individuals as well as many institutions on both sides of the border were involved. It has not only brought the two countries together, but we can start to concentrate on the future oriented projects.

Likewise, let us move from the past to the future. What are the particular topics of Czech-German co-operation?

There are many topics and they have a very wide range. The cultural topics start from learning languages, student exchanges, all the way to literature, visual arts and music. Bringing together people so that they can meet is a very important task and I am glad that the Czech German Future Fund, celebrating 20 years of existence this year, is providing such a forum. In Germany, we need to make sure that Germans know that the Czech Republic is not only close geographically, but that there are many more similarities. Knowledge of the Czech Republic can be improved in Germany. Likewise, we can improve knowledge of Germany here, and I am proud to extend my invitation to the German Embassy Open Day on June 21. I have already mentioned the economic cooperation, digitalization represents another important agenda. When we talk about the challenges, we should also mention the initiatives that originated thanks to mutual co-operation. As a result of the Strategic Dialogue, resulting from the meeting of our two countries, the European Forrest Strategy was originally designed by the Czech and German Ministries of Agriculture and then introduced and adopted on the European level. We definitely want to co-operate further within such a framework, not only on bilateral issues, but also on the issues that go beyond. Currently, we are, for example, closely discussing the future budget of the European Union.

It took six months to form the government in Germany, in the Czech Republic it has taken even longer. Does this affect the everyday nature of diplomatic relations?

The work of experts and the dialogue has never ceased to continue. There has never been silence between Berlin and Prague. Yes, there were fewer meetings on the highest ministerial level, due to on-going coalition negotiations. We hope that the close governmental co-operation will continue, including on the highest level, as soon as possible.

You are known as someone close to Angela Merkel. I am engaged in strategic leadership and Angela Merkel is mentioned as an example of one leader “archetype” according to the Talent Dynamics profiling system. However, despite all her accomplishments, whenever I mention her name during leadership workshops, the Czech audience challenges me and mentions “migration crisis”. What is the broader picture the Czechs are missing to appreciate with regards to the Chancellor who is described as the de facto leader of the European Union, the most powerful woman in the world and the leader of the Free World?

The fact that the migration issue is dominating the overall image does not do justice to Mrs. Merkel, who has been the Chancellor since 2005. Perhaps it would be interesting for the Czechs to know that Mrs. Merkel has truly special emotional and personal relations to the Czech Republic. In 1968, she experienced Prague Spring in Czechoslovakia and her interest in the country has continued ever since. Later, she returned to Prague as a researcher. As a leader, she successfully dealt with many issues, such as European financial crisis. Once we find a solution on the migration crisis, I am sure she will be appreciated in a much more positive way. By the way, we experienced the same tendency in Greece. At first, Greeks were very critical with regards to the measures taken in order to stabilize the economy, now Mrs. Merkel is perceived in a much more positive way. In the long term, I am optimistic that the image of Mrs. Merkel will be based on her achievements.

Mr. Ambassador, allow me to end on a personal note on the future of diplomacy as a challenging profession for a double career relationship. By the way, the Czech minister of foreign affairs is also facing the difficult task to reconcile his career with the one of his wife.

Diplomacy, no matter how of a traditional profession it is, will also have to look out for innovative solutions out of the box. In Montreal, we currently have job sharing of a couple on the position of Consul General. However, this also inquires flexibility from the receiving state. On the other hand, it will always represent a challenge. The modern way of communication makes it easier to some extent, but we still need to be present on the ground, as long as we cannot transfer via a laser beamer…(smiling)

The German ambassador strongly believes that Germans should get to know the Czechs more and vice versa. Therefore, he invites everyone interested to use the unique opportunity to visit the German Embassy. Mark your calendar for June 21, 2018 from 2 pm to experience the unique atmosphere of the Palace and become familiar with more than 30 German institutions working in the Czech Republic. No registration required.