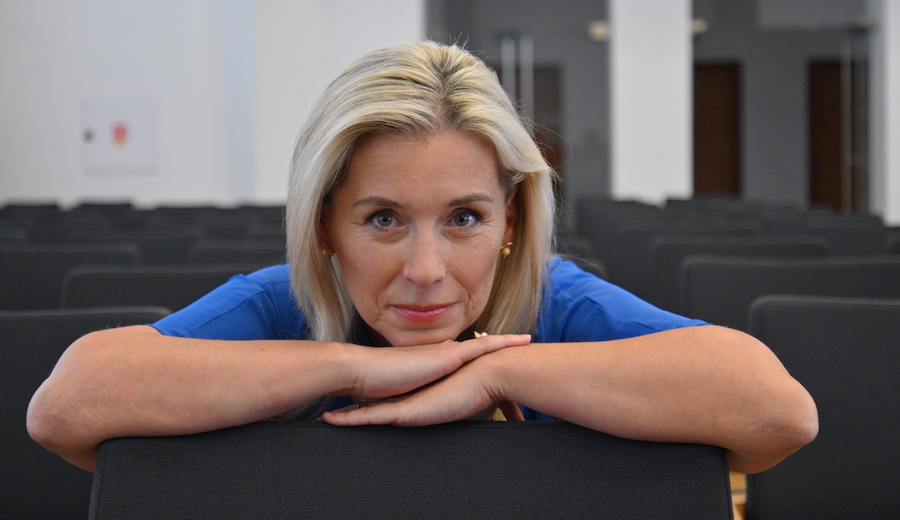 Danuše Nerudová has been the Rector of Mendel University since 2018. She also serves as the Chairperson of the Commission of Fair Pensions. She devotes herself to the issues of gender equality, as well as a long-term sustainable pension system and its financing. In April, she and other economists founded the KoroNERV-20 civic initiative. At the moment, her name is often mentioned in connection with candidacy for the function of President of the Czech Republic. I had wanted to conduct an interview with Rector Nerudová for a long time; it was originally meant to be included in the section devoted to science, research and innovation. In connection with her public appearances, we‘re including her in the section that represents possible future candidates for the post of President of the Czech Republic.

The interview took place at the beginning of April. We met in my home. Just like General Petr Pavel, Rector Nerudová neither confirmed nor refuted the candidacy, so I’ll have to wait for the journalistic scoop. Nevertheless, in contrast with the current President’s actions, the interview is characterised by a timeless message, combined with deep self-reflection and humility. And I hope that the mottos that Rector Nerudová has on her FB profile will be fulfilled: “Never give up. Believe in yourself. Nothing is impossible.“

I’ll begin our interview with a question regarding your candidacy for the President of the Czech Republic. I don’t expect you to confirm the candidacy at our kitchen table, where we’re conducting this interview, although it would be the fulfilment of a journalistic dream. I’m more interested in how you’re thinking about the function, and what you’re considering in connection with a possible candidacy.

I’ve long perceived a tendency in the Czech Republic to downplay the function of President. This media shortcut arises from the fact that we don’t judge it based on the function of President as such; instead, we view it through the perspective of the person performing this function. We need to realise how important this function is, and what a great safeguard for the democratic system it represents. First of all, the President anchors the country geopolitically. The President has the opportunity to appoint real experts to important state institutions that provide an institutional framework and ensure the continuous functioning of our state. They appoint the Governor of the Czech National Bank. We still don’t have the Euro, the CNB still has its own monetary policy. The President also appoints the judges of the Constitutional Court of the Czech Republic, which represents another safeguard of democracy in our country. Another one of the President’s tasks is to hold a mirror up to politicians, and ask them to resolve problems. Particularly in times of crisis. And last but not least, the President’s task is to give people hope and comfort. To show them light at the end of the tunnel. When we add all the afore-mentioned together, it’s a very important function that carries with it lots of responsibilities.

When you consider the function in this broader context, while at the same time receiving e-mails which mention that the Czech Republic needs a female President to follow the example of Slovakia, I reply that the Czech Republic doesn’t need a female President, it needs a male or female President who is a personality. I don’t think that the parallel between the Czech Republic and Slovakia is as straightforward as is often claimed. Therefore, I shouldn’t run for President merely because I feel flattered. The candidacy represents a great commitment, not only to the citizens of this country but also to one’s own family. Every woman fights a battle in her career, because she must act in different roles, and one of these is the role of wife, mother, daughter.

In her book “Lean in“, my favourite author, Sheryl Sandberg, describes how every working mother has the invisible letter G, for guilt, written on her forehead – guilt stemming from the feeling that a working mother doesn’t pay enough attention to her family. While corporations are trying to make it easier for women to combine work and family, a similar discussion in top politics has not even begun.

I often think back to an interview with Miroslava Němcová in Deník N [N Daily]. It contains a brilliant description of the functioning of our society in politics and the public space. In it, she mentions the difficult situation of female MPs, who face the choice of whether to succeed in top politics or see their children grow up. Our ambition should be not to want to be satisfied with this functioning. Women are often discussed. But men are faced with the same choice. Do men not mind not seeing their children grow up? So let’s not be content with making statements; let’s have the strength to do something about it. I’m strengthened in this standpoint by the memoirs of Barack Obama, in which he describes how every day, with the exception of those spent on trips abroad, he had dinner with his family and thereby fulfilled his role as a father. He always knew what his adolescent daughters were doing in school, or what was bothering them. Therefore, I believe that it’s about the will to establish a proper regimen. Even in high office, a person doesn’t have to be faced with a choice between family and career.

I’ve been following your appearances for a long time. First on social networks, then in the media. You initially declined to comment on political and controversial social topics, pointing out the fact that you, as Rector, should remain impartial. Then the year of the pandemic came, and it seemed to me that it was simply no longer possible to remain silent on certain topics…

You said that very accurately. That’s what I feel too. On the contrary, I reached the conclusion that the universities‘ task is to draw attention to specific issues in the public space, and what better time than when we’re facing such an unprecedented crisis. I was one of the first to point out that the prohibition on leaving the country last spring was in conflict with the Charter of Fundamental Rights and Freedoms, and therefore unconstitutional.

The role of universities during the pandemic is still undervalued. Students helped out in hospitals and social services; they prepared disinfectants when there was a shortage, and printed protective shields. Academic research regained recognition among society at large, and the need for international collaboration became apparent. What else has the crisis shown?

Discoveries in the natural sciences are crucial, but they’re not the only thing that’s important. I think that this crisis showed that social sciences and the humanities are also necessary for its successful management. Mathematicians can construct behavioural models, but if the behaviour changes, the formulas no longer work. We can see that the social and economic impact of the pandemic also needs to be addressed. Sociologists could have played an important role during the compilation of effective contact tracing questionnaires, so that interviewers wouldn’t find out that the person in question didn’t meet anyone all week. The crisis also showed a large deficit in terms of collaboration between the government and the academic sector. The academic sector could have created, and often did create, high-quality outputs suitable for the executive’s decision-making. The collaboration deficit existed even before the pandemic. The government’s inability to listen to experts and translate their recommendations into specific political measures resulted in us being less successful in resolving the pandemic than, for example, neighbouring Germany or the USA, where the governments have permanent scientific advisory boards. The solution for the pandemic, based on dates and facts, was literally faulty.

Let’s stay with the communication of science and its impact on politics.

It’s often said that scientists have two tasks. The first is the so-called popularisation of science, or making its results accessible to the general public. The second task is communication directed at policy makers. This communication is sluggish. And there’s no lack of communication on the scientists‘ part; it was there for the entire time of the pandemic. I perceive a reduced ability of the government to listen to professional scientific communication.

I’ll share an experience from the pandemic that surprised even me. We had to switch to online teaching literally overnight. I was concerned about how this challenge would be received, particularly by the older generation of lecturers. I was very pleasantly surprised to find that it wasn’t a problem, and they all approached it as an opportunity to learn something new. Mendel University implements University of the Third Age courses, and for this group of students, our live streams represented what was often the only regular contact with the outside world during the long lockdown period. Openminded people will seize an opportunity, regardless of age.

We‘ve made truly incredible progress in digitisation. Previously, the implementation period would have been counted in years; now we had to deploy a solution in 14 days. The university space is characterised by long academic discussions, but there was no time or room for these.

While last spring many of my colleagues viewed online teaching as something temporary, today it’s clear that we’re moving towards a new method of functioning. The protracted crisis has convinced everyone that the setup of both systems and society will simply be different.

And what are today’s students like? There is often talk of a generation that will be hard hit by the pandemic. In my opinion, students have demonstrated incredible endurance and commitment.

I believe in the young generation, and I have high hopes for it. I’m far from the opinion that young people don’t want to work, or that they‘re lazy. This generation is very focused on doing things when it knows why it‘s doing them, and sees a clear goal. It really values its free time. The fact that it‘s addressing a work-life balance doesn’t mean a reduced willingness to work. I’m no longer impressed by someone who claims they work 18-20 hours a day. The pandemic has shown how important a worklife balance is. Everything is transient, except family. Students are often said to be activists. Activism is intrinsically linked to universities. It‘s thanks to student activism that we have our freedom today. Students have moved even further away from activism. They‘ve come to understand that activism by itself isn’t enough. Today’s generation of students is very aware of the problem of the environment and climate change. It’s not because they’re left-wing, but because they want to contribute to solving the problem. Young people no longer need to own a car, because they can share one. They make sure they can cycle. They sort waste, and pay attention to using recyclable packaging. I see how students think in broader contexts, and try to present topics in the public space so that they’re not regarded as activism; instead, they want to open a discussion and contribute to changing the perception of the problem. Many people from the older generation aren’t capable of this approach. And I definitely don’t consider the young generation left-wing. The environment isn’t a left-wing topic. It’s a topic for us all. We have only one planet; there’s no planet B.

Let’s return to the beginning of our interview. You mentioned that the President should bring, among other things, hope. What gives you hope?

The young generation, and my children… I like their focus and enthusiasm for the issue. I believe in them.