“On Atatürk’s Legacy and Future Goals” 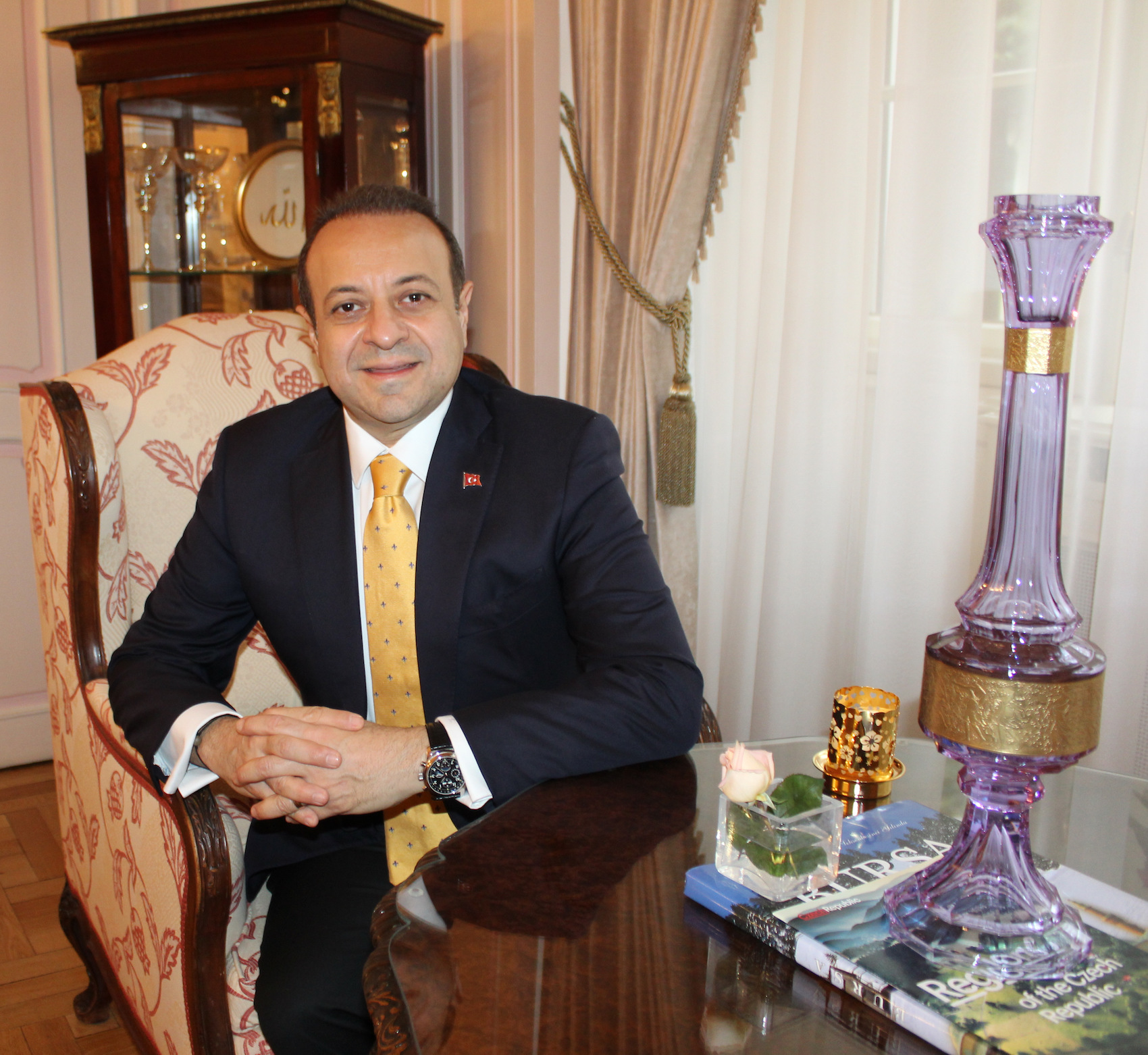 H.E. Egemen Bağiş, Ambassador of the Republic of Turkey

In 2019, more than 325 000 Czechs chose Turkey as their favorite vacation destination. How many of them were aware that modern Czech-Turkish relations have roots that trace to highest-level figures, from both the political and intellectual sphere? The first Turkish president Atatürk lived and received treatment in Karlovy Vary. He was influenced by the accents on some letters in the Czech language and introduced letters such as “ş” and “ç” when he reformed Turkish alphabet. It was in Prague, that Yakup Kadri Karaosmanoğlu, a Turkish journalist, politician, and writer, served as the Turkish Ambassador to pre-World War II Czechoslovakia and here, he wrote some of the classics of Turkish literature. Nazım Hikmet, recognized as a leading Turkish writer often visited Czechoslovakia as an exiled country and wrote some of his best poems during his travels. H. E. Egemen Bağış had an active political career, before being posted as Ambassador. He had also visited the Czech Republic before, in the position of Minister of European Union Affairs and the Chief Negotiator. He was also a Chief Foreign Policy Advisor, member of Parliament representing Istanbul, and lectured at the Istanbul Aydin University. His wife, Beyhan N. Bağış is an entrepreneur. They moved to Prague in November 2019 with their two children.

Mr. Ambassador, you will soon be celebrating the first anniversary of your posting to the Czech Republic. What are your impressions?

I love it. It is a great honor to represent my nation in a friendly allied country. I was slightly surprised when President Erdoğan asked me to become an Ambassador to Prague. I was given the specific task to increase our bilateral trade from 3.5 billion USD to 5 billion. This challenge was already announced during our official visit to Prague in 2013. Six years had passed and our bilateral trade volume did not significantly change. Therefore, the President told me to come to Prague to fulfill this goal so new targets could be set. We arrived in November 2019 and I presented my credentials to President Zeman on December 11th, 2019.

How has the pandemic impacted the diplomatic activity?

Of course, Covid-19 limited many activities. Overall, we still have achieved a lot during our first year. Prime Minister Babiš had a very successful working visit to Ankara and Istanbul. PPF Group’s Škoda Transportations bought shares and became the managing partner of TEMSA, which is one of the most prominent Turkish bus manufacturers. Two Czech citizens who were in Turkish custody have been released as a result of the persistent follow-up between Prime Minister Babiš and President Erdoğan which led to increased cooperation among the security, intelligence, and justice branches of our respective governments.

We have witnessed greater cooperation among our representatives at international organizations which resulted in the election of many Turkish and Czech candidates to several global positions. There has been a great sense of solidarity and cooperation in the fight against COVID, illegal immigration, and terrorism. 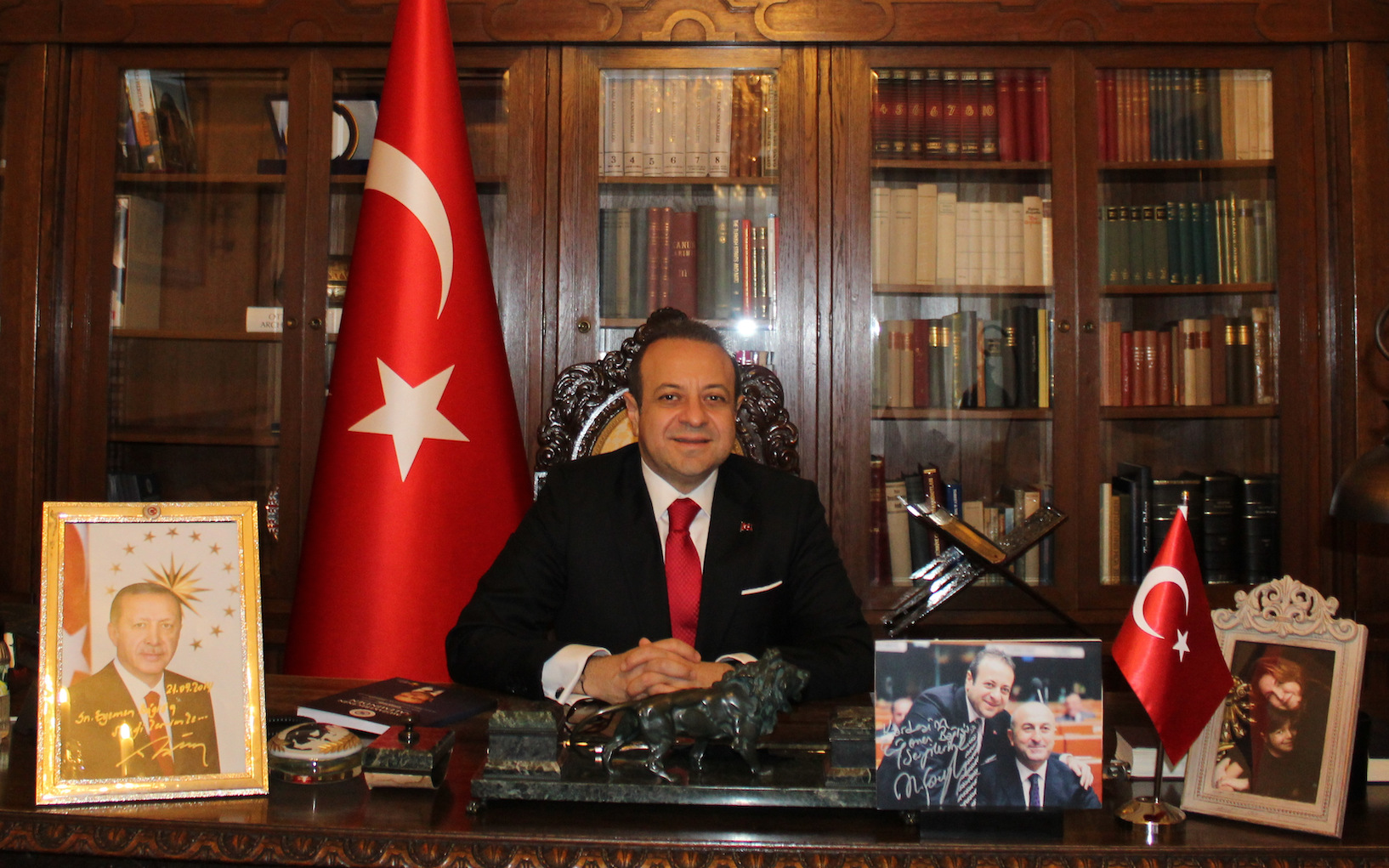 What about the trade and the goal you got from Mr. President?

Our bilateral trade is also on a trend to increase despite the limitations caused by global obstacles. For example, Škoda Auto vehicles have achieved a 26% sales increase in Turkey last year. EnergyPro has invested by building four hydropower energy plants in Turkey and two of them have already become operational. In addition to the existing Turkish Czech NGO’s like Kitap, Fenerbahce Fans Club, and Joint Chamber of Commerce I have motivated our community to establish various NGO’s to unite Turkish business professionals in Czechia, to organize cultural and art events, to promote industrial and trade cooperation, to organize weekend Turkish language courses for kids and night classes for adults and to establish associations in major cities like Brno, Ostrava, Pilsen, etc.

The Czech Republic celebrated its National Day, 102nd anniversary of the establishment of the First Czechoslovak Republic, commemorating its first leader Tomáš Garrigue Masaryk. The first president of Turkey, Mustafa Kamal Atatürk visited Czechoslovakia himself. How strong are the republican tradition and Atatürk’s legacy in Turkey nowadays?

Admiration for Atatürk and Masaryk is a unifying phenomena in both our countries. We recently commemorated the 82nd anniversary of Atatürk’s passing and celebrated his achievements during his short life of only 57 years.

As I said during the ceremony at our embassy, some of the leaders who lived in the same time period and who were a source of fear for their own nations as well as the world, have all been forgotten, or are remembered for their bad legacies today. Atatürk and Masaryk on the other hand inspired love and respect and propelled their nations to a new era, ensuring both their national existence and identity. What’s more amazing is that the admiration of their respective nations for them is increasing not decreasing over time. The reason behind this fact is that they were not totalitarian as some of their peers in many other countries were.

Atatürk prepared and led the Turkish nation for a great leap forward. In such a world, Atatürk laid the foundations of our democratic tradition. In response to the question of a foreign journalist, Atatürk said “I want to rule by winning hearts not breaking them.”

Atatürk’s intuition and foresight were also incredible. He predicted that the Soviet Union would eventually collapse and that we had to build cultural bridges with our brethren in Central Asia.

The fact that he was one of the first visionaries who put forward the idea of establishing a Balkan Union which as he said would later become a European Union for peace to be permanent is a phenomenon that people in Europe should know better.

Atatürk stated that the real liberation was through economic independence, the development and strengthening of the country in all respects. Our current government in Turkey is working resolutely towards achieving his dream. 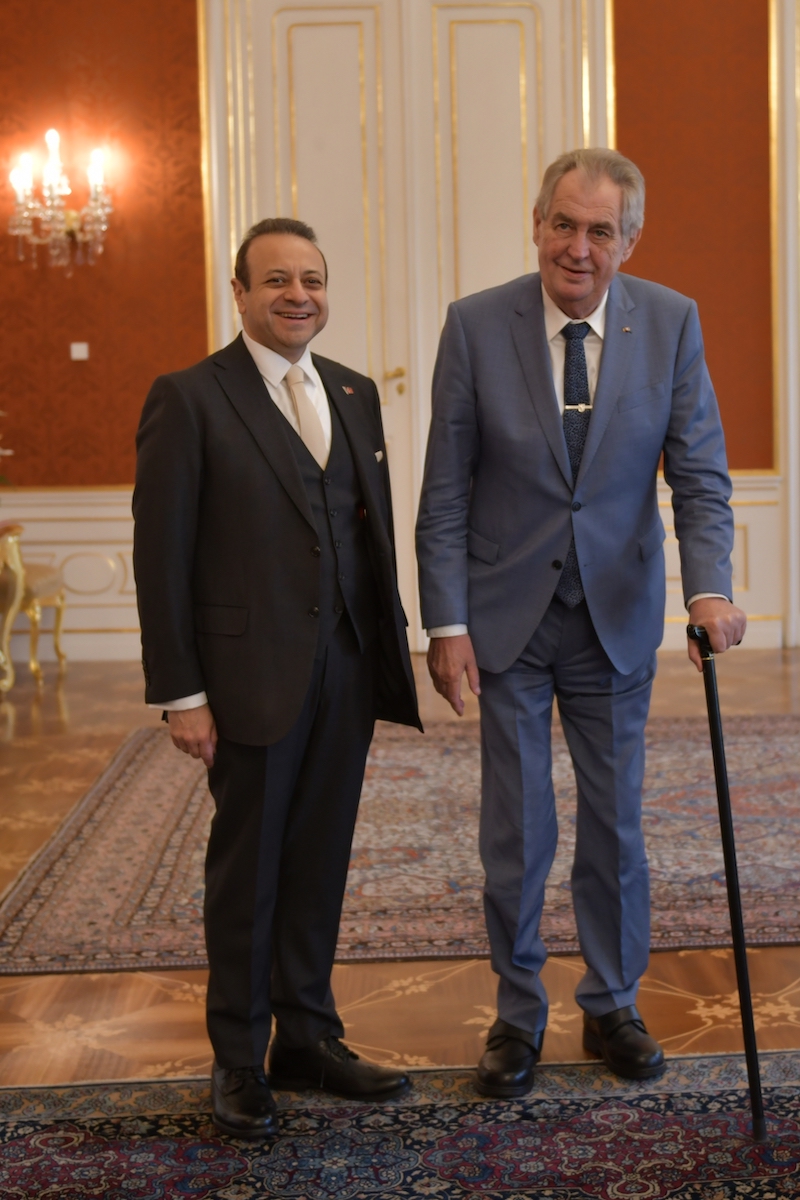 If we look at current Czech-Turkish relations, would you consider the glass halffull or rather half-empty?

Definitely more than half-full. We don’t have any historical animosities and never fought against each other. The most significant bond between our nations is the presence of three cemeteries of our martyred soldiers who fell during the First World War at the Galicia front and are now in their eternal resting places in the Czech Republic. Although they are buried here, they were here to protect our German allies and the local inhabitants from Russian forces. To give a more recent example, I should add that our nation deeply appreciates the Czech Government’s initiative to restore the Bohemian crystal chandeliers of the Turkish Parliament, which were damaged during the disgraceful coup attempt on July 15th, 2016. That dreadful night, the Turkish Grand National Assembly where our nation has been represented since 1920, was bombed almost a dozen times by the Gulenist terror network.

At every chance we get, we underline the importance of the Visegrad Group and put forward our best efforts to advance cooperation. We are making every effort to sustain and strengthen the support of the Czech Republic to Turkey’s membership to the EU and to increase the cooperation between our two great nations under the NATO umbrella and try to contribute to lasting global peace. As the founding President of Czechia, Václav Havel, advised “we shall work for goals because they are good, not just because they stand a chance to succeed.”

What are the prospective areas between the two countries for cooperation in the post-Covid world?

We already have substantial trade and cooperation in the sectors and fields of energy, security, defense, tourism, culture, and education. I must admit that although we currently have partnerships in all of these fields, there still is much more considerable potential in our respective countries for mutually beneficial cooperation.

The fact that Turkey is one of the top tourist destinations of Czechs, and that the Czech Republic is one of the most preferred countries for Turkish students regarding exchange programs, only reinforces our hope to strengthen the bond between our nations.

We had planned to organize an annual Turkish festival in Prague to promote our cultural richness which we had to cancel due to Covid-19 but we are hoping to fulfill this goal in June of 2021.

I would like to establish sister city relationships between Turkish and Czech cities and towns. I plan to visit different regions of the Czech Republic in order to meet both elected local government and business community leaders to establish ties with their Turkish counterparts. I believe tourism is an important sector for our citizens to flourish stronger bonds and will try to increase flights among our major airports. Last but not least, motivating our respective business communities to attend trade fairs for different sectors is my hope and plan for the coming year.

Czech glass and porcelain have always been very popular for Turks and since the time of Ottoman Emperor Abdulhamit, we have been using Moser glasses while entertaining our guests in our Sultan’s court, palace, and embassies all around the world.

As many people know, the Ottomans wanted to include Vienna as part of their Empire and unsuccessfully seized the city twice. Some analysts claim that is because Ottoman Sultans had not seen Prague and did not know how beautiful it is. They would much prefer to have Prague rather than Vienna but they simply did not know what they were missing.

There is a misunderstanding about the predominant religion of Turks not only in the Czech Republic but in many parts of the world. Ignorance and lack of knowledge play an important role in this misperception. Unfortunately, we are living in a period when hostility to Islam and Muslims and disrespect for our prophet is spreading like cancer, especially among some in Europe.

I would like to underline and let your readers know that no Muslim can be a terrorist, nor can any terrorist be a Muslim. A terrorist is a bloody murderer who does not hesitate to kill innocent people. All religions including Islam very clearly prohibit killing. We must unite and combat against all violence together. 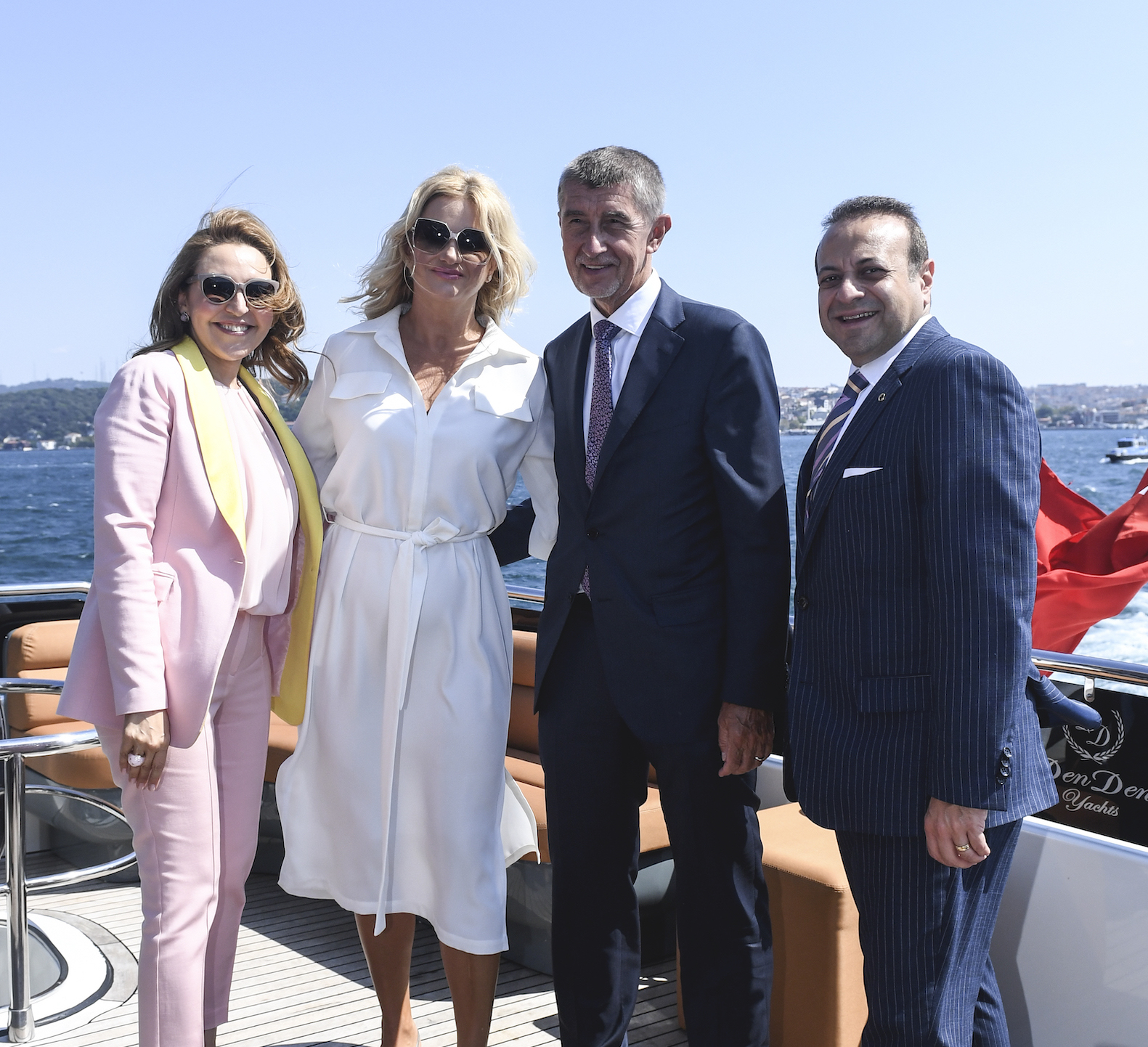 What are your final words to the Czech and Slovak Leaders Magazine readers?

It is a great honor for myself and my wife, Beyhan, to represent our country in the golden city of Prague that lies in the heart of Europe.

Turkey has the will to develop our mutual relations even further in all areas between our country and our ally, the Czech Republic. I want your readers to know that I am ready, 25 hours a day and 8 days a week to help establish ties with their respective Turkish counterparts. Long live Turkish Czech friendship and alliance.