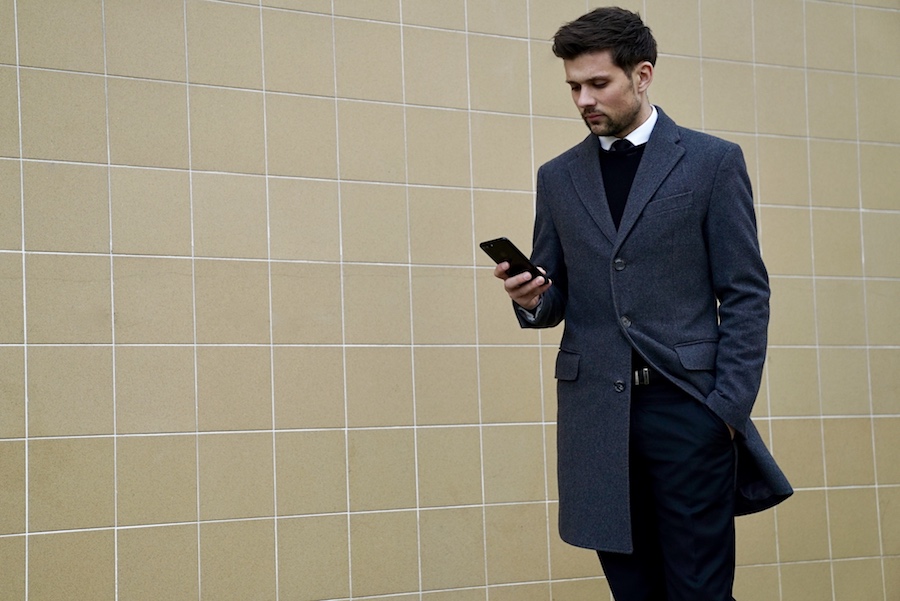 He’s young, charming and gallant. You can feel his energy and enthusiasm. He won the Novinářská křepelka (Journalist Quail) award in 2016, and a Forbes Magazine’s “30 Under 30” award in 2017. Over 75 000 people follow him on Twitter. Despite this, or perhaps rather because of this, he remains very modest, humble and down-to-earth. At the age of 26, he has almost 10 years of working in journalism behind him. He began as a sports editor, then he moved to Czech Television, subsequently working for DVTV for two years and he has worked for over a year for the Seznam Zprávy news website where he focuses on complex topics such as bankruptcy seizures, homelessness, poverty and President Zeman’s election and trips. He has made fascinating and innovative reports from Ukraine, Russia, Jordan and neighbouring Hungary.

I personally know Filip from his time at DVTV. At that time, I gave him our magazine on the street and we considered possible co-operation in regards to interviews with interesting figures. Two years later, he has become a figure suitable for inclusion in Czech and Slovak Leaders himself. He agreed to the interview, but it wasn’t easy to find the time. Due to another in a series of planned demonstrations against Andrej Babiš’s government, which was held in over 20 Czech towns and cities on the second Monday of April, we met on Sunday afternoon. Filip first gallantly took care of my coat, and then from personal experience he took the Dictaphone into his own hands and spoke into it, due to the noisy location. And so followed a pleasant and relaxed interview with a fellow journalist.

Filip; what with recent events, both the murder of Slovak journalist Ján Kuciak and demonstrations supporting the independence of media and Czech Television, what’s it like being a journalist today?

My feelings and relations to the profession are changing a lot in regard to current events. I don’t allow myself to feel threatened or afraid. But on the other hand I am feeling ever more frustrated. This doesn’t arise, however, because I want to interpret the truth, although I think a certain group of journalists have long made this mistake. I have always tried to show reality from various perspectives, not presenting the one correct opinion. I film a report, and I invite people to watch it and form their own opinions. Nevertheless, I feel that society is currently so divided that two people with different opinions are now unable to sit down at one table over a beer and discuss their different ideas without having a major argument about it.

Is this related to the fact that according to the latest research fake reports spread six times faster than true ones?

That figure doesn’t surprise me. I’m slowly starting to doubt whether black is black even when I have a chemical analysis available to me confirming the case. I was shocked when one public media corporation held a discussion over whether the earth is round or flat. There are facts, evidence and matters which are given. I don’t mean we shouldn’t talk to people who believe in a “flat earth”, or even scoff at them, but on the other hand the current fashion of questioning everything means that we are ignoring facts, data and evidence which simply reflect reality.

This is your tenth year in journalism. You’ve defined your mission as follows: do the best journalism. Since moving to Seznam.cz have you moved on to so-called agenda-setting, and topics which would otherwise have been ignored?

I’m humble enough to remind myself that I’m really not here to tell people what they’re supposed to think, or to teach them. I haven’t got all the answers. I choose important topics from my perspective. I have realised that for myself and my generation, some things are taken for granted, like getting news from different sources independently of whether they’re in Czech or English. There are, however, loads of people here who don’t do this. At Seznam Zprávy, my objective is to produce standard foreign reports from various perspectives: such as working with video, editing, emotions, issues, and convey these foreign issues to people in a manner which they are going to enjoy and want to follow. In the Czech context, journalism is divided into two fields: either a boring presenter with a detailed specialist table of data, or instead an overly simplified rendition of generally well-known topics. Nothing in the middle. Abroad, in contrast, they know how to convey even complex topics in an understandable and enjoyable way. That’s what my job’s about, and I appreciate the freedom that Seznam Zprávy has given us. So it depends on the whole Obzor team whether we can convey the topic in a convincing way such that people watch the topic and then share it with as many people as possible.

You’ve said that your report on poverty was the most watched report, even in terms of numbers of responses. This included dozens of people offering specific help.

I‘m delighted about it, but at the same time we have to deal with the response. We don’t want to offend anyone; we endeavour to steer responses somehow. If 40 people offer clothing for a child, well a specific person won’t need that much clothes. So the next episode won’t be so much about ad hoc help, but the need to change the system; or systematic help. But I don’t feel that I’m important or that I want to set up discussion on the welfare system itself. I don’t know how to set up the welfare system so that a million people aren’t in poverty. That’s not my ambition; I just want to make the best possible programme. A feeling of self-importance can be very dangerous.

I can see your ability to stay grounded, despite your audience and the awards you have won. Humility is usually an attribute which your peers do not have from the perspective of older generations.

How many people read Forbes? How many people know what the Journalist Quail is? It’s just a bubble; maybe it’s expanding, but it’s still a bubble. Paradoxically, I can say that I’m doing as high quality work as possible ever more for myself mainly. I want to draw attention to certain topics, and it’d be great if a debate was triggered about them.

Besides journalism, you’ve begun doing some teaching too. You give talks to young people, you look at the topic of media literacy, you encourage people to check information.

I feel great responsibility. Despite my youth, I’ve had loads of opportunities, many people have helped me and so I need to at least give this back to society somehow. That’s why I go to discussions with primary and secondary school pupils and students, to whom I am naturally close. When I hold discussions with them, again I don’t give them the one truth, but I tell them to look at how emotions are utilised, the choice
of words used, how the overall editing of a report influences its overall impression. I leave them to work out their final opinion. I see some hope for the future here. If the young learn this way of evaluating information, then they’ll keep that skill. It’s easier than convincing the older generation to change.

In 2016, you reported on the Presidential Election directly from the USA. How do you compare media literacy in the Czech Republic to the rest of the world? And how do you perceive the current demonstrations supporting the press, or against the government?

I don’t think media literacy is much different here compared to Western countries. After the elections in the USA, a lot of people were surprised by Donald Trump’s victory. Trump travelled around small towns and spoke to people. Local problems and fear of the future naturally proved to be more important than global events. I see a great parallel here with Miloš Zeman’s re-election, someone who also travelled around towns and villages for many years speaking to people. I met one person who has voted for Zeman for 20 years because 20 years ago he shook his hand. Although just a few hundred people attended his meetings, over twenty years this easily creates a mass of votes. Take the current demonstrations as an example. 10 to 15 thousand people meeting up once or twice a year; this is the same as the number of people the President meets every year. If our current political representation is as it is now, there are considerations being made of governing with the communists and extremists, and in response just the odd demonstration takes place, then we must still be doing alright. On the other hand, I don’t underestimate the Czechs’ ability to defend their opinions; I’m just putting the figures into a certain perspective so we don’t succumb to the opinion of any particular bubble. And I’d also point out that the ability to defend your opinion on the streets can be double-edged. In 2015, for example, Czechs didn’t join in the mass demonstrations and violent protests against immigration, and luckily it was also thanks to that Czech laziness that the episode passed without mass violence.

What question do you most commonly ask?

I’m ever more frequently posing the question: “Then describe it to me”. I call on others first to share and I then work from that. I’ve noticed how my questions change with the formats of my work. At DVTV, I used the format of critical interviews where I instead encouraged argument.

And what question would you ask yourself?

That’s hard. If I could ask myself a question which I would answer in 10 to 15 years, then it would go: “What more could you have done, but didn’t do?” I hope I get some feedback.