“Moldova is a European country with European values” 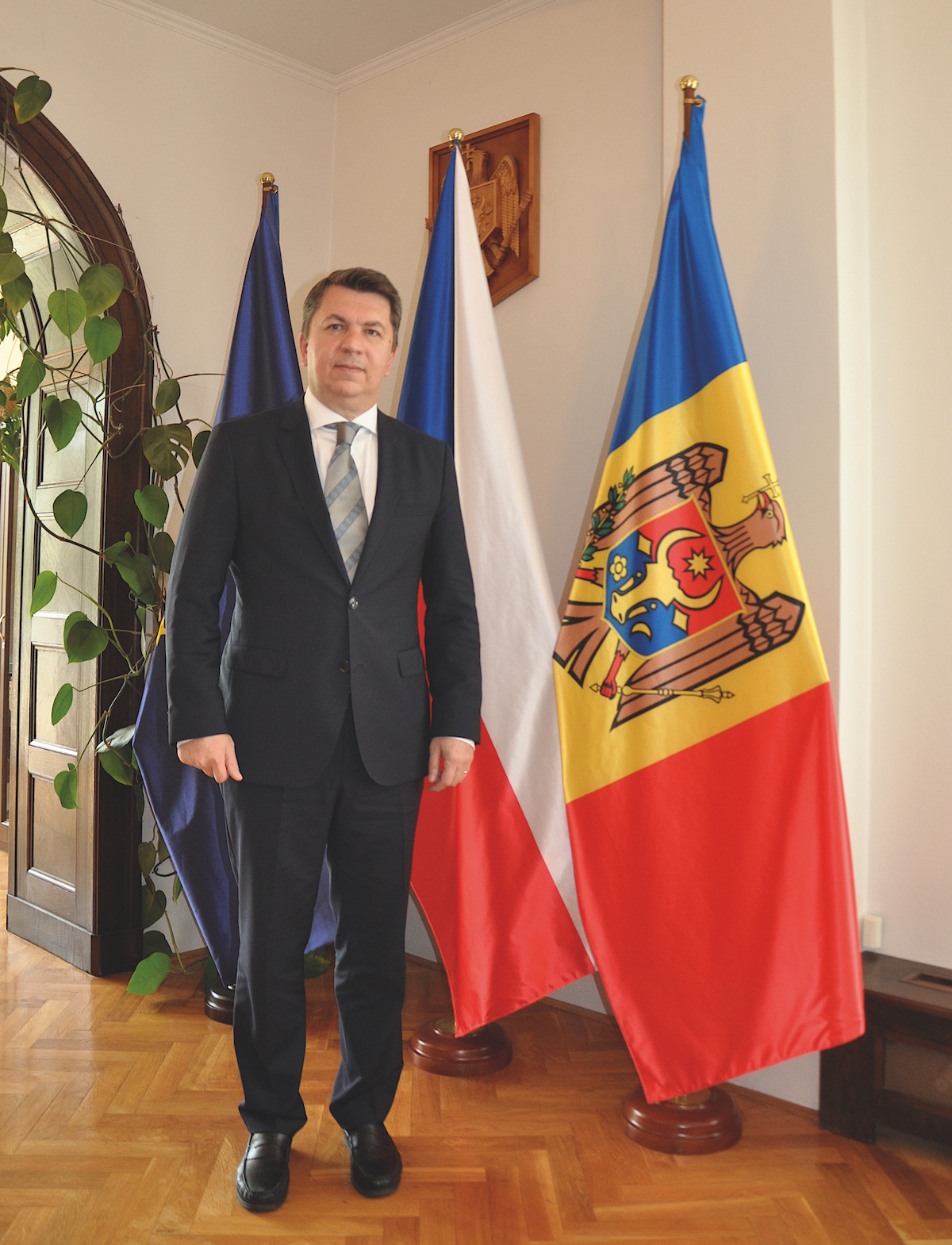 Mr. Alexandru Codreanu started his mandate as Ambassador of the Republic of Moldova to the Czech Republic two years ago. Among many other assignments, including positions at the Ministry of Foreign Affairs and European Integration, he has represented his country in Hungary, to the Holy See, Slovenia, Croatia, Bosnia-Herzegovina, to the Council of Europe in Strasbourg and worked with the OSCE Mission in Tajikistan.

The major achievement of which Moldova takes pride in was attained this year on 23 June: the European Council granted Moldova the EU candidate status. “The Republic of Moldova is firmly determined to remain part of the free world. International support for the European future of Moldova is, and will be, highly appreciated,” the Ambassador expresses in gratitude.

Can you tell us a bit about yourself and your diplomatic career?

I joined the diplomatic service of my country three decades ago, soon after the independence of the Republic of Moldova was proclaimed. On my part, this required further graduation studies in the field of international relations, as well as additional diplomatic training during my first years at the Foreign Ministry. Over the years, I have had many opportunities to promote the interests of the Republic of Moldova in the multilateral and bilateral cooperation settings, including on various assignments at the Ministry ́s headquarters in Chișinău, the capital city of Moldova, and in diplomatic missions abroad.

For my diplomatic mission in Prague I am accompanied by my wife Svetlana, since my adult son, Dinu is already settled down with his own family.

How long have you been in the Czech Republic and what is your impression of it?

I presented my letters of credence to the President of the Czech Republic, Mr. Miloš Zeman, in October 2020, two years ago. Since then, I have enjoyed the welcoming attitude and cooperation of the Czech officials and people. I have had several opportunities to discover the rich heritage of the country, both in Prague and in other regions. Since the entire world has been struggling with the pandemic over the last two years, I appreciated the solidarity and supportive approach of the Czech partners towards Moldova in these challenging times, when humanitarian aid was provided for the healthcare sector in my country. However, my current mission is not my first encounter with beautiful Czechia. Several years ago, I already had the opportunity to visit here, though briefly, as part of the Moldovan governmental delegation. I also attended the spring OSCE Forum at the Czernin Palace, and, on a different occasion, as a tourist, had spent a wonderful Christmas holiday in Prague with my family.

Your country has made long-term efforts to join the European Union. How do you evaluate the process so far?

Moldova is firmly determined to remain part of the free world. The freedom and the dignity of our people make us a country with a strong European identity, which we deeply value. Moldova is a European country, with a European language, a European history, and a European political system.

The Republic of Moldova has had European aspirations since its independence was declared on 27 August 1991. Three years later, the EU-Moldova Partnership and Cooperation Agreement was signed. In 2014, the EU- Moldova Association Agreement, including a deep and comprehensive Free Trade Agreement, strengthened Moldova’s political and economic ties with the European Union even more. By signing this agreement, Moldova committed to reforming its domestic policies based on EU laws and practices. In April 2014, Moldova became the first country in the Eastern Partnership to benefit from a visa- free regime. Since then, more than 2.5 million Moldovan citizens with a biometric passport have travelled to the Schengen Area without a visa, which has fostered tourism, business relations, and people-to-people contacts.

…and the most important advancement took place this year…

Certainly. In March, the Republic of Moldova submitted the application for membership of the European Union, and on 23 June 2022 the European Council granted us the candidate status. The Council will decide on further steps, including opening of accession negotiations, once all conditions specified in the Commission‘s opinion on the membership application are fully met.

The fact that the Moldova candidate status decision was taken quite soon after its application clearly reveals the support of all EU member states for the European perspective of my country. 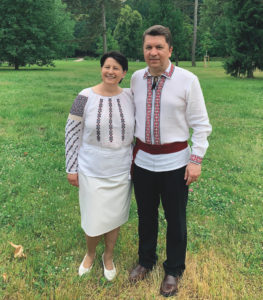 I believe the Czech Republic belongs among these supporting EU countries. Can you explain some benefits resulting from Moldova’s integration into the EU?

Indeed, the Czech support for Moldova’s efforts to join the European Union was clearly stated during the official visit of the Moldovan Minister of Foreign affairs and European Integration, Nicu Popescu, to Prague in May 2022. The Foreign Minister of the Czech Republic, Jan Lipavský, also emphasized that Moldova’s European aspirations will be supported during the Czech Republic’s presidency of the EU Council in the second half of 2022.

By carrying out this ambitious EU integration agenda, the Republic of Moldova benefits from substantial EU support. The European Union supports Moldova on its democratic path, the aspirations of our people to live in peace and prosperity, integrating the country into the EU single market, and enhancing sectoral cooperation. Some important effects refer to the increased diversification of markets for Moldova’s exports, with access to the enormous EU market. The EU is by far Moldova’s main trading partner, and accounts for 56% of its total trade – around 63% of Moldovan exports are destined for the EU market. It is also the largest investor in the country. Moldovan citizens are enjoying the visa liberalization for short-term stays.

How would you describe the status of Czechia-Moldova relations?

Diplomatic relations between our states were established 30 years ago, on 1 June 1992. We have enjoyed an excellent development of our mutual relations over the past three decades. The recent visits to Prague and to Chișinău by the two foreign ministers, Nicu Popescu and Jan Lipavský, highlighted the existing relations of friendship and very good cooperation. The interparliamentary dialogue is advancing as well, including planned visits at the level of the Speaker of the Parliament. As I have already mentioned, another significant area of cooperation is the Czech support for Moldova’s efforts to join the European Union. In this regard, Prague will be visited by several Moldovan high-level delegations during the Czech Republic’s presidency of the EU Council in the second half of 2022. Indeed, an important aspect of my mandate as Ambassador in Prague is to enhance the Czech support for the European future of Moldova. Bilateral trade and investment have increased over the years. The volume of Moldovan-Czech trade reached 194 million USD in 2021. The biggest Czech investment in the Republic of Moldova is a major company in the energy sector.

The Republic of Moldova is one of the priority countries for the Czech development assistance, focused on the sustainable management of natural resources, good governance, inclusive social development, agriculture, and rural development. The Moldovan authorities appreciated also the valuable Czech aid to meet challenges of the large inflow of Ukrainian refugees in our country in recent months.

On this occasion, let me reiterate that the Republic of Moldova has condemned Russia’s war against Ukraine and reaffirmed its full support for the sovereignty and territorial integrity of Ukraine, is providing help to the refugees from the neighboring Ukraine and will continue with humanitarian support.

The presidency of the Czech Republic in the EU Council started on 1 July 2022. What are you, as a representative of your country, expecting?

We appreciate the continuing Czech support for Moldova’s European aspirations. Following the recent decision to grant Moldova the EU candidate status, there will be a more active participation of Moldovan officials at the Czech presidency events. In July, Moldovan officials attended the informal meeting of EU Justice and Home Affairs (EU JHA) ministers, the Conference of Parliamentary Committees for Union Affairs of Parliaments of the European Union, and the Eastern Partnership Youth Conference. A major result was the launch of the “EU Support Hub for Internal Security and Border Management in Moldova” by the European Commissioner for Home Affairs and the Moldovan Minister of Internal Affairs, in the margins of the informal EU JHA. The Embassy is anticipating the participation of the Foreign Minister and other Moldovan officials and experts at the EU meetings hosted by the Czech Republic during the forthcoming months of 2022.

This interview is taken on the occasion of the National Day of Moldova. Can you share your wishes for both Moldova and Czechia?

The Republic of Moldova declared its independence on 27 August 1991. Since then, Moldova has consolidated its democratic political system, developed its international relations, and made significant advances towards its European future. The June 2022 European Council decision to grant the candidate status to Moldova is the most important progress of the year.

I wish the Republic of Moldova and its citizens much success on our European path and the fulfillment of our aspirations to live in peace and prosperity. I wish for the Czech Republic to accomplish its EU Presidency objectives, and also wish peace and wellbeing for its citizens.