“After 5 years it is time for farewell” 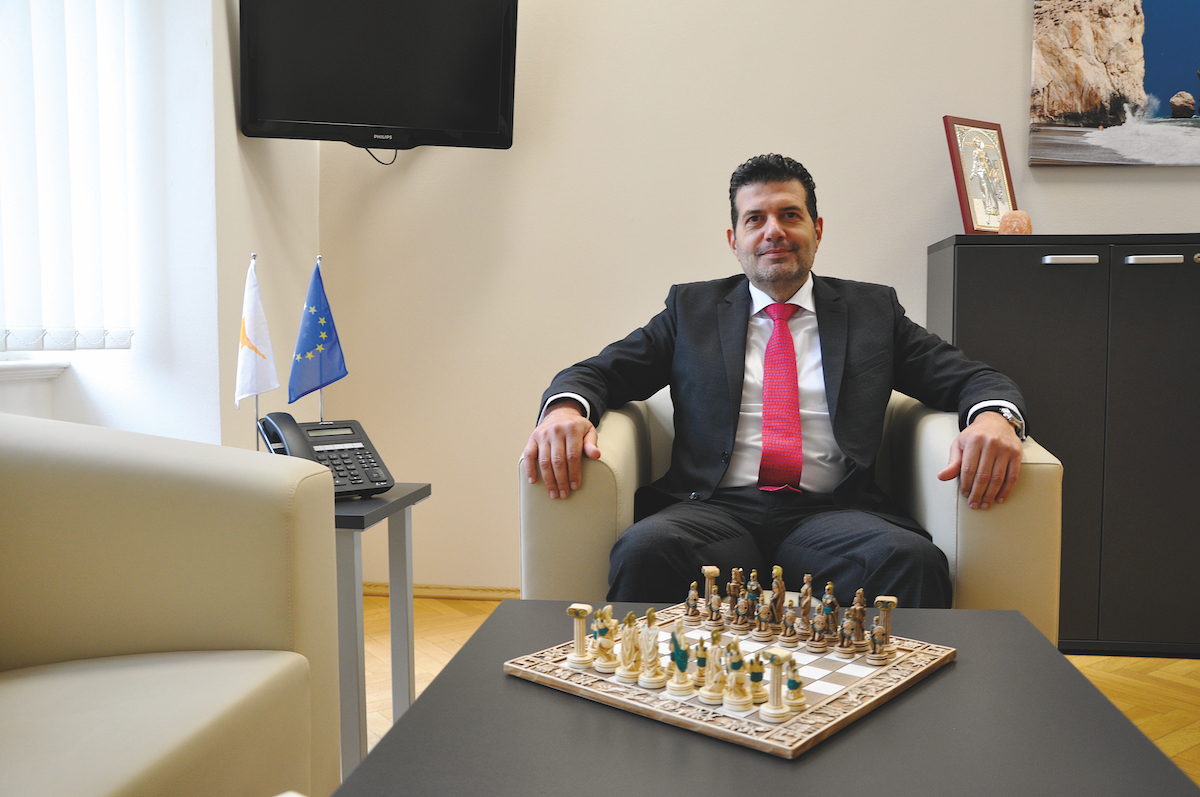 Mr. Antonios Theocharous, Ambassador of Cyprus, has successfully represented his country in Czechia for five years. In his farewell interview, we asked him to share his point of view on the time of his mission here, as well as some other issues. Enjoy the reading… and who knows, it might even inspire you to learn more about the Ambassador’s homeland, and spend your next holiday in Cyprus – a warm, friendly island country in the Mediterranean Sea.

Can you please introduce yourself a bit to our readers?

I was born in 1971 in Limassol, where I lived until 1989, attending elementary and high school. Those carefree school years were interrupted by serving in the Cypriot army, due to the consequences of the Turkish invasion in 1974 and the ongoing occupation.

This was followed by university studies in the UK, in the field of economics. At the end of my studies, and after passing all the stages of both the written and oral exams, I joined the diplomatic service of the Republic of Cyprus. I wanted to serve my country by communicating the Cyprus issue, and discovering different possibilities for strengthening the relations of Cyprus with other countries. This was only possible with hard work and effort.

You have been in the Czech Republic for five years instead of the usual four. How did that happen?

I arrived in Prague in September 2017 with the instructions from Nicosia to re-operate our embassy, which had suspended its operations due to the financial crisis in 2013.

Thus, the first two years were mostly spent on the administrative and organizational issues related to the operation of the embassy. At the same time, the embassy was promoting bilateral cooperation with the Czech Republic, as well as serving the public – especially Cypriot citizens. A turning point that will not be forgotten was the pandemic, and, as it was throughout the whole world, its negative consequences on the economy and society in general. This was also the reason why I have stayed in the Czech Republic one year longer than expected.

How many countries have you served in before coming to Prague?

So far, I have been based in five countries: Austria (with parallel accreditation to Slovakia, Croatia, Slovenia, Liechtenstein, OSCE, and the UN Office in Vienna), Greece (Consul General in Thessaloniki), Germany, Hungary (with parallel accreditation to Bosnia and Herzegovina) and currently the last mission has been to your country, the Czech Republic.

As I already mentioned before, the period of the COVID-19 pandemic has undoubtedly had the biggest impact on my duties in Czechia. Since the airports and means of transport were closed, several Cypriots were stranded in the Czech Republic and the embassy had to intervene to help them return to Cyprus.

Does the role of ambassador affect your lifestyle?

Of course, being an ambassador has both positive and negative effects to one’s lifestyle. It’s a matter of dealing with them in good spirits and always being optimistic. Living far away from your hometown and family is not easy, but it is also challenging in terms of meeting new people and making new friends. The little free time I have I mostly devote to my loved ones and to relaxing by watching TV – Greek comedies and series.

Cyprus is an attractive holiday destination for Czech people. How do you promote your country?

Cyprus organizes promotional events in collaboration with local agencies. For example, in the summer the Botanical Garden of Prague presented an exhibition with plants from Cyprus, as well as the book „Botanical Journeys through Cyprus“. The embassy also hosted an event and presented Cypriot flavors by offering Cypriot halloumi cheese and the alcoholic beverages koumandaria (sweet wine) and zivania (shots). That is what the person visiting Cyprus will see, smell, and taste.

In previous years, the Embassy of Cyprus took part in the Festival of Embassies, where people could taste traditional food of different countries. Furthermore, we distribute quite a lot of promotional material on every occasion, like the European Day, Festival in Brno etc.

The EU Council presidency of the Czech Republic started in July. What are your expectations in this regard?

Cyprus expects the Czech Republic to lead the effort to restore peace in Ukraine, remove Russian occupation troops, and show respect for Ukraine‘s sovereignty and territorial integrity. Having said that, we expect that the Czech Republic will do exactly the same and without discrimination in the case of Cyprus, which has also been under occupation since 1974.

This interview is a farewell after your five years in Prague. Can you make a wish for our countries on this occasion?

Let me say that our bilateral relations within the framework of the EU are at a very good level, with the prospect of further improvement. I wish both of our countries freedom, peace, security, and prosperity.