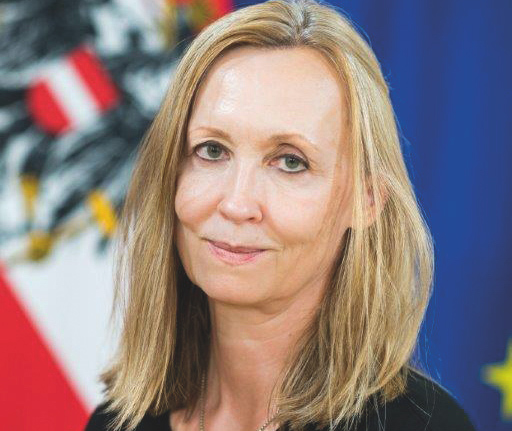 “History shared by Austria and the Czech Republic still has a role to play,” says Ms. Bettina Kirnbauer, Ambassador of Austria, and continues: “however, my strongest impression is how future-oriented our bilateral cooperation is”. In our interview, she speaks about her 30 years in diplomatic services, the relations between our countries, and recommends reading the Austrian- Czech history book “Nachbarn-Sousedé” to learn more about our common past.

Tell us about yourself, please.

I grew up in Vienna, a city I am very fond of. I studied law and German literature at the University of Vienna, and then joined the Austrian Foreign Service. I must confess that in spite of working as a diplomat for over 30 years, I still find my work exciting and rewarding. There are so many interesting topics and impressive people to meet, really a lot of diversity. I am still learning something new each day.

What made you become an ambassador?

I have always been fascinated by international affairs, and by the opportunities to use constellations of influence and mutual interest to contribute to a better world. I had not really planned to become a diplomat until, during my internship at an Austrian court of law, I one day saw the announcement for the entrance exam for the diplomatic service of the Republic of Austria, the so-called examen préalable. I immediately decided to go for it.

You have been in the Czech Republic for two years already. Can you share some of your impressions and highlights of that time?

My strongest impression is how future-oriented our bilateral cooperation is. This is for instance reflected in the growth of mutual Czech and Austrian investments. As of 2021, Austrian direct investments in Czechia amounted to almost 17 billion Euros, and thus secured jobs for around 100,000 employees in the Czech Republic.

Due to the complex history shared by Austria and the Czech Republic, the past, to a certain degree, still has a role to play. The history book Neighbours “Nachbarn – Sousedé” (2019 in German / 2020 in the Czech language), written jointly by Austrian and Czech historians, was a milestone in this respect. Another important step was the recent unveiling of a memorial plaque at the Terezín Memorial for Jewish Austrians who had been deported to the Theresienstadt Ghetto by the Nazi regime.

Can you compare your current time in the Czech Republic to 1998-2001, when you served here as Deputy Ambassador?

As neighbouring countries, Austria and Czechia have always closely cooperated. However, the accession of the Czech Republic to the European Union has taken our cooperation to a new level. Nowadays, we are partners in the EU.

How does being an ambassador fit into your lifestyle?

Being an ambassador is almost a lifestyle. There is little free time. However, I like to read science fiction. Recent books I enjoyed were by Neil Gaiman and Vladimir Sorokin.

What is the best adventure you have had?

Being part of the Austrian team responsible for the organisational support of the Iran nuclear talks in Vienna in 2014-2015 was a challenging and intense time for me. When Iran and the P5+1 confirmed the agreement on the Joint Comprehensive Plan of Action JCPOA on 14th July, 2015 at the United Nations in Vienna, this was a very special day for me.

What is the most difficult part of being an ambassador?

The most difficult part of being an ambassador in a neighbouring country such as the Czech Republic
is that there is so much to do and so little time to do it. Since so much more could be done to further our relations, I sometimes have to make hard decisions on what to focus on.

You are a traditional holiday destination for Czech people. How do you promote your country?

The scenic beauty of the Austrian Alps, which in winter offer one of Europe’s finest skiing, as well as the cultural richness of cities such as Vienna and Salzburg, attract many Czech guests. We try to make our Czech guests feel at home in Austria. The long-standing Austrian hospitality expertise and the quality of service of our hotels offer a unique experience to our guests.

What is the current status of Czechia – Austria relations?

The relations between Austria and Czechia have never been as good as they are now. Let me mention, for example, the exemplary cooperation during the terrible tornado that hit Southern Moravia in 2021. Austrian Red Cross helpers were immediately on the scene to help treat the injured.

The presidency of the Czech Republic in the EU Council started in July. How would you rate it?

This interview is done on the occasion of your National Day. What do you wish for your country? And for the Czech Republic?

Given the war in Europe, my wish for both countries is that freedom, peace, and democracy shall prevail. To quote the Austrian Federal President Alexander Van der Bellen: “Our solidarity, our compassion, our common will to live in freedom and peace are stronger than any aggression. We stand with Ukraine.”