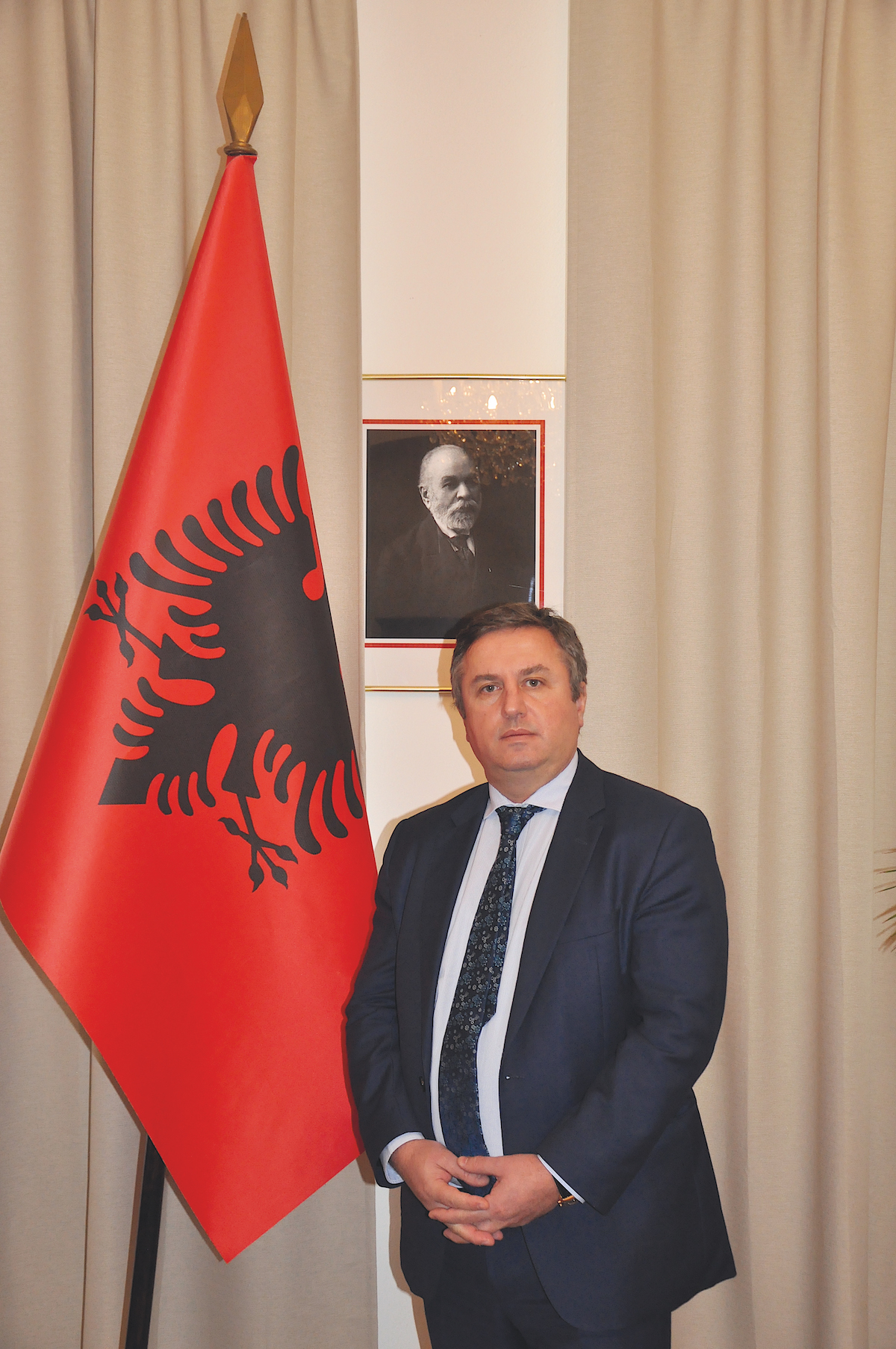 The current Albanian Ambassador to the Czech Republic, Mr. Ilirian Kuka has been with the embassy here since 2014. In our interview he, among other things, drew attention to the fact that Albania’s greatest European Union integration milestones both happened during Czech presidencies. “We are very pleased with the strong support that all Czech political parties have shown towards Albania’s EU integration aspiration. We have found a strong ally in Czechia”, said the Ambassador appreciatively.

Before becoming an ambassador, you had an interesting and successful corporate career. How did that change come around?

To start from the very beginning, let me talk about Tirana, my hometown. Here, I was born, grew up, and in 1993 graduated from the University of Tirana, Albania. After this graduation, I moved to Italy to continue my studies at the University of Bari, graduating there in 1997 with the diploma of Doctor of Sciences in Engineering. Later that year, I moved to Boston, Massachusetts in the USA to further my education and start a working career. After working in different multinational companies such as State Street Corporation, Gillette Company, Procter & Gamble Co., etc., I moved back to Tirana in 2005 to take over the role of General Director of AlbTelecom a.s., the state-owned, largest telecom company in Albania. The government at the time hired me to run and prepare the company for privatization, which was completed in 2007.

In 2008, I founded and managed an investment company focusing on investments in CEE and the Balkans region, with the main investment activities being in Albania, Kosovo, and the Czech Republic. From 2014 to 2018, I assumed the role of counsellor at the Embassy of Albania in Prague, focusing on economic diplomacy. In 2018, after completing the posting, I returned to Tirana just to be assigned as an Ambassador of the Republic of Albania to Czechia, presenting my credentials to President Miloš Zeman on 6th December 2018.

Joining the embassy in Prague 8 years ago, you must have had plenty of time to experience this country. What is your impression?

I have a strong attachment to the Czech Republic, and to Prague in particular. As you said, I was posted here for the first time in March of 2014, being in charge of business and economic affairs between Albania and Czechia. Prague is my favourite, with its architecture, parks, museums, services, small coffee shops, and nice restaurants. I have been to many places here, but if I am to name but one, I can say that I am very much attached to “Staroměstské náměstí” with its magic and history that almost every old building can offer. It simply surprises me every day anew.

I have also visited many places outside of Prague, but feel that I have not travelled enough. Every time I go to a new place, I promise myself that I will have to come back because of the nice feeling I get during the visit. I have visited all regions, but in the South Moravian region I still have a few cities that I need to see.

Do you enjoy your ambassadorial role? Does it fit your preferred lifestyle?

Serving as an ambassador is a very demanding engagement with strict boundaries, but at the same time it is also very rewarding. It is a position that gives you the possibility to make a difference on many levels, especially in the relationship between countries. The Czech Republic is a very central country, and has become a very important factor in the regional and European political scene, which has also intensified our work as an embassy and increased the number of activities that we need to follow. As a result, we all have less time for our families, which I think has a major impact on our lifestyle.

Albania is a NATO member state, and wants to join the EU as well. Do you feel supported in your efforts?

Albania became a full member of the NATO Alliance on 1st April 2009. For EU membership, we applied on 28th April the same year, during the first Czech presidency, and on 19th July 2022, during the second Czech presidency, Albania was approved to officially start the EU integration negotiations. It is quite interesting that both of Albania’s integration milestones happened during Czech presidencies. We are very happy for the strong support that all Czech political parties have shown towards Albania’s EU integration aspiration. We have found a strong ally in Czechia, one that is always pushing back the sceptical countries in order to complete the integration of Albania and all other Western Balkan countries (into the EU).

NATO membership and EU integration are not just about benefits, economic or political. It is more about a place of belonging. With the fall of communism in the 1990s, we got a taste of what the democratic world can be. Albanians have gone through a very harsh dictatorship during the time of communism. This is a reminder for our experience to not be repeated, and this is one of the reasons why 94% of the Albanian people are in favour of joining the EU. 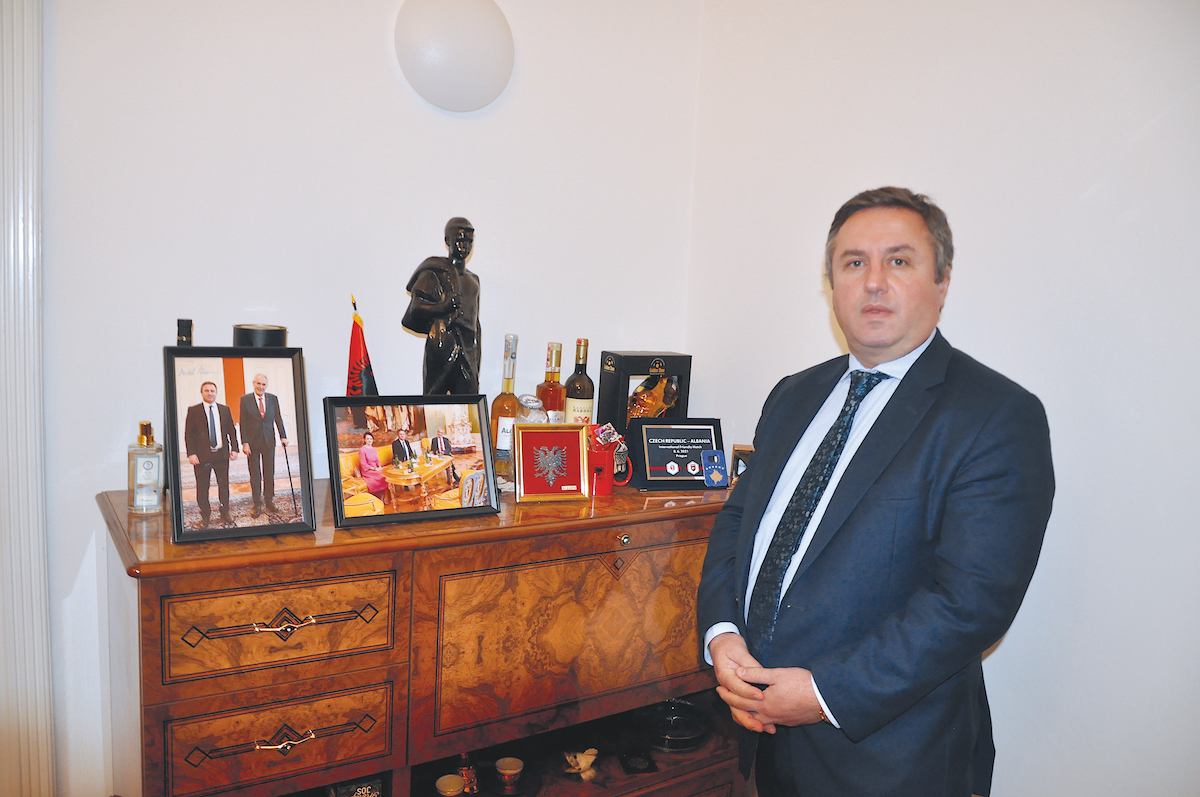 You have mentioned the current presidency of the Czech Republic in the EU Council. Is there anything you would like to add?

We had been expecting a stronger focus on the integration process of the Western Balkans, and this materialized from the first days of the Czech presidency. We were very supportive of the European Political Community summit, organized very well by Czechia. The political agendas of our countries are similar, focusing on promoting equality, prosperity, and protecting human rights. Albania has been promoting these values during our current term as a non-permanent member of the UN Security Council, and Czechia has been doing the same during its EU presidency term. Both our countries have aligned fully in supporting Ukraine and strongly condemning the Russian aggression.

Considering all you have said so far, can we evaluate the status of Czechia-Albania relations as being very good?

Indeed, the status of our bilateral relations is at its highest level. As I have already mentioned, Czechia has been a strong supporter and advocate of Albania’s EU integration process. During the Czech EU presidency, it was decided to organize two major events in Albania:

Both events reflect the importance given to the integration of the Western Balkans into the EU, and the great status of the political relationship between Czechia and Albania.

What about the relations between common people?

Czech people have been discovering Albania in recent years. Before the pandemic, the number of Czech visitors was increasing by double digits every year. This year, we have seen the same energy in visitors, and direct flights were increased to four times per week during the summer season. The flights were almost fully booked, which makes us believe that upcoming numbers will be even higher than pre-pandemic ones. In Albania, Czech tourists are discovering our nature, mountains, sea, culture, and food, but more importantly, they are discovering the friendliness and harmony of the Albanian people. I am very happy that many Czechs are falling in love with Albania and are becoming our returning visitors. Of course, the Embassy has done media campaigns and participated in different events, presenting to audiences what Albania has to offer. We can already see the supportive role of the positive feedback coming from people that have already visited Albania. These satisfied visitors are not returning alone from Albania, but are bringing along their positive experiences.

You are giving this interview on the occasion of your National Day. Do you have a special wish for your country?

This year, on 28th November, we will commemorate 110 years of Albania’s independence. My wish for Albania is to prosper as a dignified member of Europe, together with other democratic countries, in a safer world without war and with less injustice.

2022 is also the year of the 100th anniversary of establishing diplomatic relations between Albania and Czechia (Czechoslovakia). On this anniversary, I wish for us to continue the strong relationship between our countries, for the benefit of both our peoples.