“We are proud to celebrate 100 years of diplomatic relations” 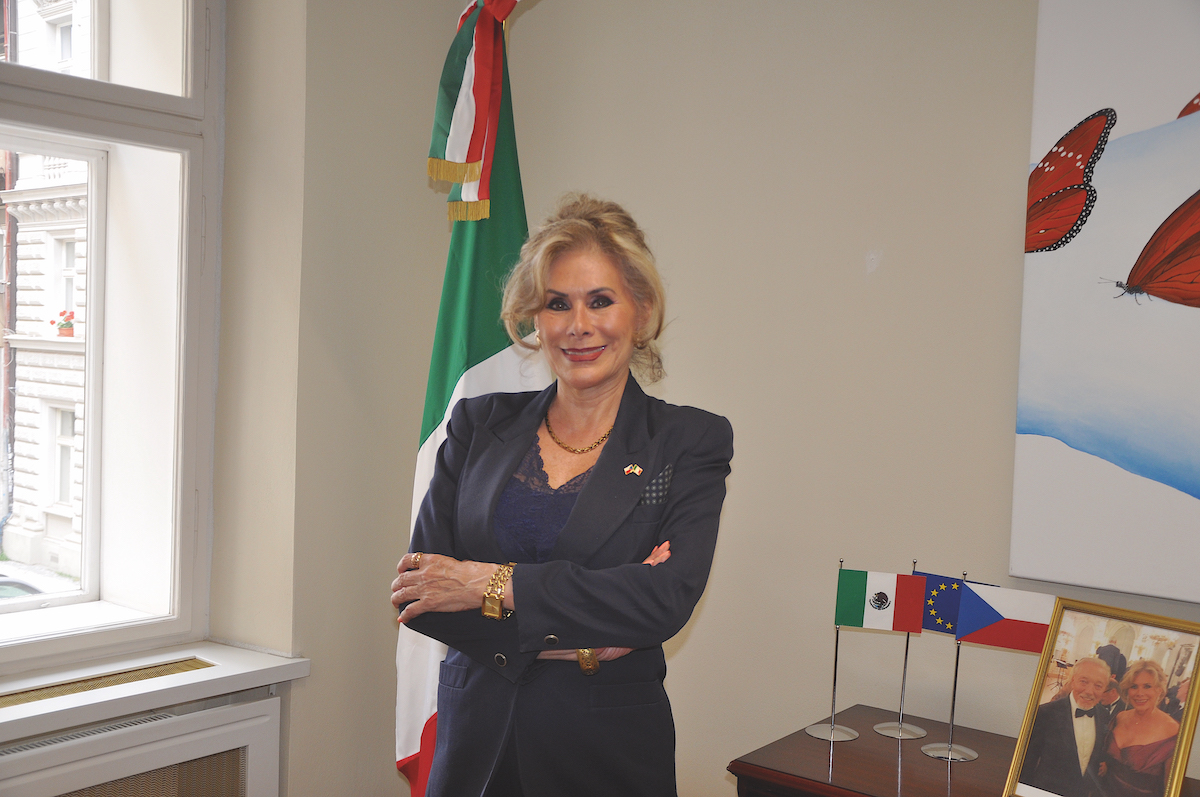 “Past and present can say a lot about our rich friendship,” declares Mrs. Leonora Rueda, Mexican Ambassador to the Czech Republic, with confidence. What is the connection between her and President Masaryk? Why should we learn about General Lazaro Cardenas? And what are the so-called “fam trips” to Mexico? These are just a few intriguing questions you will be able to answer after reading our interview.

Can you please introduce yourself to our readers?

First, let me express my thanks to the Leaders Magazine for your interest in Mexico, and for a great opportunity to transmit some little hints about my country to the readers. Since I am a part of my country, here is a bit about my background. As a good Latin, my complete name is Rosaura Leonora Rueda Gutierrez. I was born in Kansas City, Mo., USA, where my father was a Consul of Mexico. When I was three years old, he died, and my mother, three months pregnant with my sister, decided to come back to Mexico to live with the rest of the family – two aunts. So, I grew up in the big, populated, and vibrant Mexico City.

Lucky me, my primary school was El Colegio Madrid, founded by the Spanish exile; followed by the Secondary School No. 8 “President Masaryk”, where I learned the Czechoslovak anthem! I am very happy that I will always remember the Kde domov můj, země česká, domov můj.

It never crossed my mind though that someday, Česko would also be my domov můj. I did my university studies at the Faculty of Political Science, in the field of International Relations, in the glorious UNAM (National University Autonomous of Mexico), the largest in Latin America.

I have been a widow since 2008, and have two beautiful daughters, Valentina and Itzel, and two marvellous grandchildren, Leo and Elisa.

How did you become an ambassador?

I have been a career member of the Mexican Foreign Service since 1990, but I started working in the Ministry itself many years before, in 1974, working part-time and studying. It was a great advantage to learn some daily practice secrets at the “headquarters”, that will later on serve me to “accommodate accordingly” in the solution of problems – better than (learning just) the theory.

My first assignment was in New Orleans, La., as a Consul of Mexico. My next posts abroad have been to Hanoi, Vietnam, as Charge d’Affaires, and as Ambassador to Jamaica (concurrent to The Bahamas), New Zealand (concurrent to Samoa, Tonga and Tuvalu), and finally now to the Czech Republic. Before and in the middle of these terms, I have served at the headquarters. So, in my case, I got the first appointment as an ambassador after 16 years of work, based on my “file” that contains proof of experience and the necessary merits to obtain this high responsibility.

Do you still enjoy living your ambassador role?

I must say that yes, after all these years of being an ambassador, it is still a great honour and the highest privilege to represent my country and carry on the highest responsibilities the best way I can. I love my work and feel passionate about it. Especially when you are in a country that inspires you like the Czech Republic. I would also like to point out that having great colleagues, with whom you can share your ideas, concerns, and social life, brings enrichment to your life.

An ambassador’s life is one in which studying never ends. The global dynamics make us attached to the media, to the daily news, and to the permanent dialogue with political and economic actors. Should I give some advice to the future generations of ambassadors, I would say: Do not believe everything you hear or read! Try to see the shades behind the, at the first sight, black and white.

What should we know about Czechia-Mexico relations?

Mexico and the Czech Republic enjoy an excellent political dialogue in all fields of bilateral and multilateral relations. We share the same values and principles of freedom and democracy.

Today, Mexico is the main economic and commercial partner of the Czech Republic in Latin America, with about 1,800 million of dollars in trade; a growing presence of Czech and Mexican tourists; a rich cultural and educative exchange and a great potential to take advantage of. This year, I am proud to say that we celebrate 100 years of the establishment of Mexico-Czechoslovakia / the Czech Republic diplomatic relations (1922-2022). Since then, there have been many episodes that reveal the strong level of friendship, dialogue, and cooperation that happily exist between our two nations and peoples.

Can you give some concrete examples, please?

One quick example of this is the Mexican position in 1938, unique in Latin America, towards the Pact of Munich, when the then President Lazaro Cardenas denounced it as the sacrifice of Czechoslovakia and the door to the Second World War. In memory of this historical fact, you can find a park named General Lazaro Cardenas in Prague 6. In the same sense, you can find a village in Mexico City named San Jeronimo Lidice out of solidarity with the Czech Lidice village, after the massacre of its population in 1942. Also, during the Olympic Games in Mexico in 1968, the presentation of the renowned Czech woman gymnast Věra Čáslavská was a great occasion for Mexicans to show her their full solidarity, given the events of that year in Czechoslovakia. The past and present can say a lot about our rich friendship and understanding. Just last March, high authorities of both countries gladly endorsed the same feelings and decided to go forward to reach new levels of cooperation.

You have been posted in the Czech Republic for four years. Are there still any areas left for you to explore?

Every day, I discover new opportunities in different fields, on which I could work for the strengthening of the relationship between our countries and peoples. From those in trade and education, to those in speleology or anthropology!

Not to mention the multiple experiences in the areas of science, technology, gastronomy, and spirits, of course, pivo in the first place… and tequila, in the second! I have found multiple areas in which both societies could work together. I would need another four years, at least, to take advantage of them all.

Tourism is very important to your country. How do you attract visitors to come to Mexico?

We are developing an interesting program to work together with travel agencies, which includes the presentation of thematic videos on different routes dedicated to special interest issues, for example: the fashion route, the gastronomic route, the mountains route, the ethnic museums route, etc. Also, we have the so-called “fam trips”, meaning familiarization trips to the country, for the travel agencies. Being an ambassador in your country, I consider myself lucky because in Cancun, one of the main tourist destinations, there is a travel agency called Mexikocesky that helps us with the Czech tourists, mainly those interested in the beautiful Riviera Maya.

This interview was taken on the occasion of your national day. Can you make a wish for your country, and perhaps for the Czech Republic too?

I wish all the best to the Czech Republic for a successful role as a presiding country of the EU Council. I hope that during its tenure we can put “the cherry on the cake” of the centenary of the establishment of diplomatic relations between our countries, with the EU ratification of the updated Global Agreement Mexico-EU, which would take us to a higher level of bilateral, economic, and commercial relations.

On this 212th Anniversary of the Independence of Mexico, I would like to wish both countries to continue strengthening our friendship links and to work hard together in all fora, bilaterally and multilaterally, to reach the oh-so-necessary global peace, not just with words but with facts. We could remember to this point President’s Juarez words from the 19th century: “Among individuals, as among nations, the respect to the rights of others is peace”.