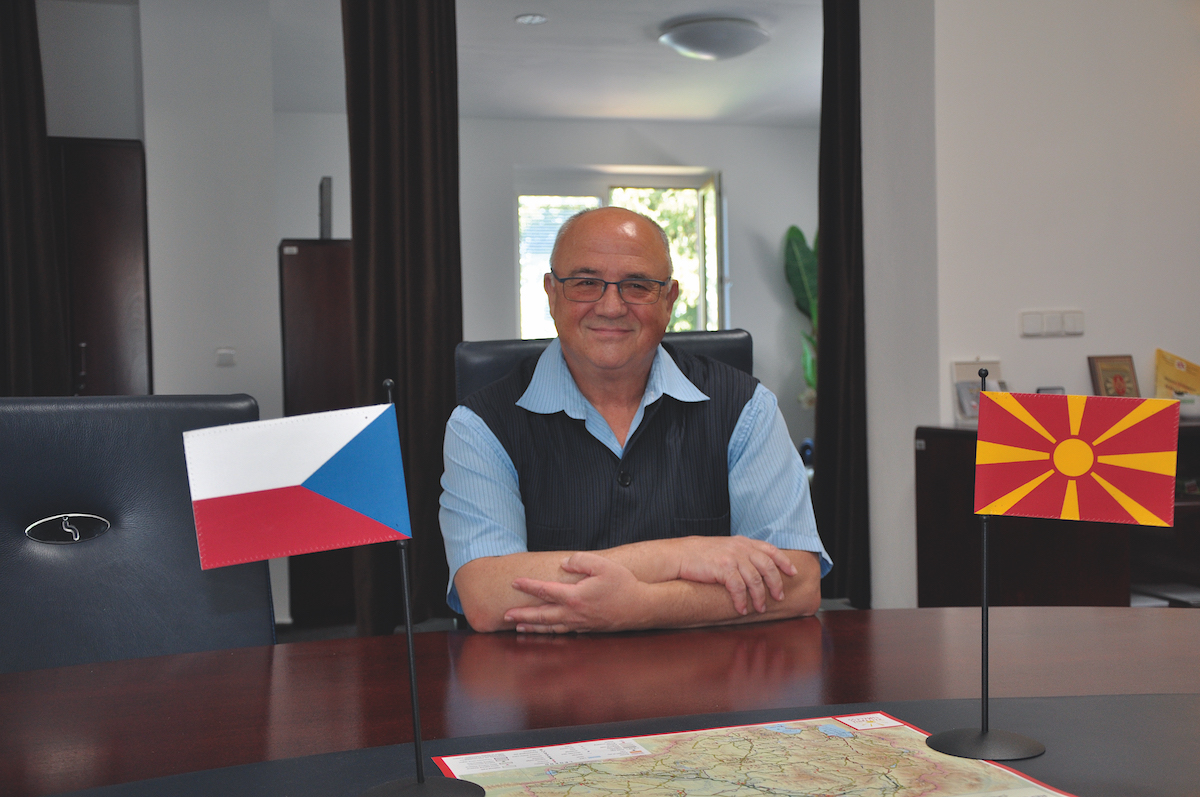 H.E. Sashko Todorovski, Ambassador of the Republic of North Macedonia

Mr. Sashko Todorovski, Ambassador of North Macedonia, acknowledges the respect of the Czech people for the past and our ability to maintain a link between our past and present. He believes that “the Czech Republic, which has a long history of dealing with aggression from the USSR, is particularly significant in this moment of incredible aggression on European soil in the 21st century”. How does he describe his life journey leading to the post of ambassador in Prague? What does the EU symbolise for him? And what does he wish for his country?

Can you tell us a bit about yourself and your journey to the post of North Macedonian Ambassador in the Czech Republic, please?

At the time of my studies, the importance and status of diplomacy were at their peak! Various world crises and so-called political “hotbeds” were being solved by really magnificent diplomatic efforts and results. The dissolution of inherited international concepts, such as the Cold War or the superpowers and bipolar structure as a basic assumption, promisingly led the world into a better future. We had the privilege to witness détente and jus contra bellum (de-escalation and the right to oppose war), the OSCE and Vienna Documents, the rise of the collective legal mind in the Council of Europe and its European Human Rights Court, and many other diplomatic and international achievements, unthinkable until then. Hence, it was in some way only natural for me to see myself as part of this, particularly while studying law and being good at languages.

Maybe a fortunate coincidence was that, at that time, both the then SFR Yugoslavia and SR Macedonia were introducing very strict criteria for recruiting future diplomats. Hence, I could and did enter diplomacy on my own merits and not by means of a political (or any other) criteria. Seven years later, I had to undergo an even more demanding procedure to transfer from the Macedonian to the Yugoslavian Diplomatic House. Finally, once the dissolution of the SFR of Yugoslavia had begun, a group of Macedonian diplomats in Belgrade refused to be advocates of a failing and flailing rampant Yugoslavia (already without Slovenia and Croatia), and so we fought our way back into Macedonian, now North Macedonian diplomacy.

Can you share some of your strongest impressions from living among Czech people?

The first thing you notice in the Czech Republic is respect for the past and for nature. The Czech people have a long memory, a tumultuous history, and many witness accounts of that history. You manage to establish a link between the past and places, buildings, and even the most everyday things, creating a clear picture of continual development. The Czechs are proud of their history and build stories around it, stories about battles and everyday life, about being similar and different to other people, stories that have the power to engage any visitor to the Czech Republic.

Everywhere you go, you can see a different moment from the cultural development of this country, a continuum of people that have built the present, which is so filled with culture and art. Every monastery has a story to tell, as does every castle, street, wall, house, and secret garden, and all the extravagant art pieces that seem to be scattered throughout Prague and other cities. It is noticeable that the Czech people like to talk about their history and are very knowledgeable about their past.

As noticeable is also your relationship with nature and your green heritage. Forests, parks, and gardens are all part of the Czech Republic and are hugely respected. Every park and every forest has its own unique characteristics. You can see subtle traces of human care everywhere, a cross- generational effort to preserve the natural beauty, to enrich and expand it.

I dare to say that having a tumultuous history is not that rare in the European area. Does having NATO, which you joined in March 2020, and the EU, where you received a candidate country status in 2005, help?

To be a NATO member is, first and foremost, a question of security. With the spectre of war looming even on the European continent, and when certain old ideologies and terrifying scenarios are being revived, NATO is a structure that offers a sense of security. The EU is a symbol of unity, while respecting differences. It is a symbol of the highest-level value system that humanity has currently achieved. This value system, the basis of the EU, is the greatest possible guarantee of protecting human rights and freedoms, but also of development and change, that considers both the present and the future.

North Macedonia entered the Euro-integration processes with huge enthusiasm, and still believes that the EU is where it belongs. Unfortunately, the road to the EU turned out to be complicated and burdened by a past that some of the EU members are struggling to let go of.

There is undoubtedly support from a lot of EU members, however, it is currently insufficient to escape the trappings of history.

What do you expect from the Czech EU Council Presidency?

The Czech Republic, which has a long history of dealing with aggression from the USSR, is particularly significant in this moment of incredible aggression on European soil in the 21st century. The Czech Republic knows what it is like to fight for your independence, for the ideology of human rights and for democratic values – specifically against one of the greatest aggressors, one that is currently harking back to the past instead of being part of progress and the future. In that sense, the Czech presidency of the EU right now means that there will be a clear idea of the true values we are defending, of the lessons to be learnt from the past, and what the future should look like. The priorities set by the Czech Republic for its presidency are all in this direction, and clearly confirm the country ́s important role in the further progress of the EU.

In the case of North Macedonia, the Czech Republic has always been a friend to our country, with a great understanding of the problems that we have faced, a clear view of past injustices, and the potential traps history has laid out for us. Therefore, North Macedonia believes that the Czech Republic will be a very important partner on our journey to join the EU, supporting and easing the process.

Tourism plays a significant role in the economy of North Macedonia. What are some attractions your country can offer to its visitors?

One of the most difficult tasks in promoting touristic North Macedonia is doing justice to the variety of things on offer. Often, people have only heard of Ohrid Lake and the capital city, Skopje. In reality, North Macedonia packs quite a lot in a relatively small area, from wonderful mountains suitable for sports activities any time of year, to hidden gems of natural beauty such as the Smolen Waterfalls, Kuklice, or the lakes on the Pelister mountain top. It also offers an opportunity to explore history from antiquity, specifically the Byzantine and Ottoman periods, in rich archaeological sites.

North Macedonia is a place where the west and east meet, and you can see this through the architecture, music, food, and traditions. It is a unique experience, rarely replicated. Hopefully, next year, once the Czech EU presidency is over, there will be further opportunities for us to fully embark on our tourism promotion!

How do you rate Czechia-North Macedonia relations?

The relations between the Czech Republic and North Macedonia have always been friendly, respectful, and supportive. Currently, North Macedonia considers the Czech Republic one of its greatest friends and supporters on its journey to join the EU. There is of course always more work to be done, and improvements could be made in the areas of economic and cultural cooperation.

North Macedonia can learn so much from your country on dealing with a complicated history and developing democratic structures, and hopefully the Czech Republic can make use of our experience in building a multicultural and multi-confessional society.

This interview is taken on the occasion of the national day of North Macedonia. Would you like to wish something for your country, and maybe for the Czech Republic too?

It is a lesser-known fact that Macedonia has been an independent country from 2 August (the National Day) 1944 until the beginning of 1946, when it joined the Federal Peoples Republic of Yugoslavia. It joined voluntarily and willingly, unlike the countries that joined the Warsaw Pact. In the same peaceful and voluntary way, the then Socialist Republic of Macedonia decided to exit the SFR of Yugoslavia on 8 September (the Day of International Independence), 1991. So, in a way, we have two national days, but it seems that the people still prefer the first one – 2 August.

History aside, I wish for my country to continue its progression towards the best European values, and to further develop its cultural diversity and the unique way of existence of many ethnic groups in such a small piece of this Earth. I also wish my country a speedy entry to the EU, where it belongs geographically, historically, and by the values it has chosen to follow. To Czechia, I wish for further growth, maintaining its distinctiveness, and fitting that distinctiveness into the broader tapestry of the EU.