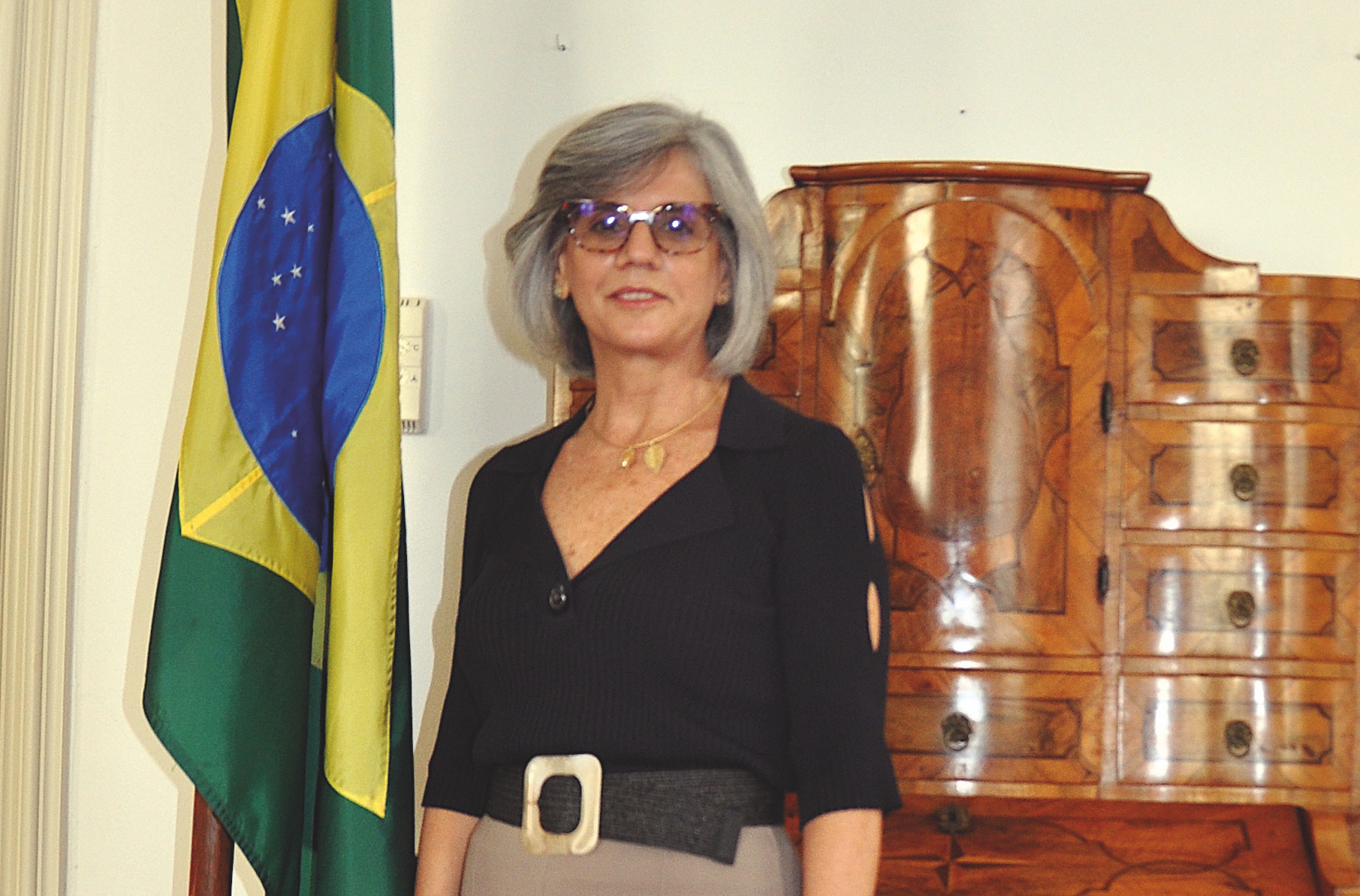 Brazil is the 5th largest country in the world, about double the size of the EU, covering almost 50% of the South American continent. It is the largest country with Portuguese as its official language. The coldest month is July, and the hottest is January. It is a country of over 214 million people, with excellent football, Amazon rainforests, diversity, and coffee. It is the country of H.E. Mrs. Sônia Regina Guimarães Gomes, Ambassador of Brazil.

Please tell us about yourself and your journey to become a diplomat.

Well, this may be a bit too long to answer in detail, so I will make it brief. I must confess that becoming a diplomat was not my first career plan. As a kid I wanted to be a biologist. Later on, I fell in love with history, but it was just when I went to college that I discovered International Relations and decided that a diplomatic career was the right path for me.

I enjoy discovering what can bring people together, rather than focusing on their differences. When you exercise openness to new cultures, to a different world view, you discover that underneath we have much in common. Take Brazilians and Czechs: we share common values, and I like to think that as a diplomat I must try to emphasize these common traits.

During the hearing at the Senate Foreign Relations Committee in November, you said: “We are going to have fairs with more products, and focusing on Brazilian regions…”. Can you tell us more about your plans?

It is not only Brazilian products that I want to bring to the Czech Republic. I also want to promote Brazilian culture as well. Brazil has such a richness and diversity, but also cultural experiences that are sometimes similar to those of the Czechs. I have recently discovered that the Brazilian Cordel literature (Cordel in Portuguese means string, and these booklets are displayed hung on a string), which is popular and grassroot chapbooks sold in fairs to entertain and educate people, is like the art of storytelling known here from the medieval period. I intend to make an exposition showing both forms of art and what they have in common.

I also want to work together with our Portuguese friends to help promote the Portuguese language. We intend to have a lot of activities for people of all ages next June, when we celebrate Portuguese Language Day.

How would you describe the relationship between Czechia and Brazil?

The Czech Republic and Brazil relations go back a long way. Sometimes I joke and say that we have always been by your side, no matter what your current geographical configuration or political status was. Our countries have had political relations since 1921. Brazilian history is permeated by important Czech figures, especially from the period when Brazil was still a young empire and received Czech naturalists, painters, and artists. We have cities in Brazil created by Czechs, and, as is well known, we had a highly regarded President that was of Czech descent, Jucelino Kubitschek.

But, of course, we can always build more on top of this solid foundation. Brazil is a country that can offer opportunities to businesses and universities. It is a source of renewable energy, the third largest food producer in the world, and we also have a vibrant tech sector, so there are lots of opportunities to be explored by companies of both countries in a myriad of fields.

You have served in many countries. Can you share with us an adventure you have had?

As diplomats, we have many lives. Each country and each city give us an opportunity to discover new things, not only about the region but also about ourselves. We are touched by distinct kinds of beauty, curious ways of living, and new ideas. But for me, the Republic of Cabo Verde was where I learned more about our planet and about myself. I remember a trip to one of its islands, Fogo, a still-active volcano. I saw the most amazing night sky there, absolutely studded, as if you were near the stars there. But it was also in Cabo Verde that I thought I’d get stranded on one of those islands, when the car that we rented broke down in the middle of nowhere and we had no cell phone. Fortunately, we found someone to help our group! But you realize that some comforts are not common or given, and that we must be prepared to use our resources in curious ways.