“Smiling is just an automatic reaction.” 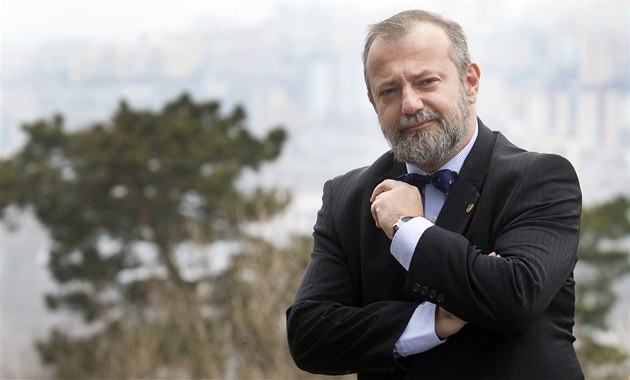 A special personal interview with Hynek Kmoníček, Director of the International Department at the Office of the President of the Czech Republic, done by his wife, Indira Gumarova, on the media, patriotism, cooking skills, peace in the Middle East and so much more…

“If I were Angelina Jolie, I would make a movie based on his character. I learn something from him every day,” says Indira Gumarova, photographer and media advisor, who observed  Dr. Hynek Kmoniček’s life far closer than anybody else (as his wife, in particular) and interviewed him for The Czech Leaders Magazine.

What book are you reading right now?

The End of Suffering, by Pankaj Mishra. I sometimes think I must be just the second person to finish reading this book after the author himself, and neither of us got it fully. An overcomplicated book on current India and historical development of Buddhism there and in the West.

What’s the last movie you saw in the movie theatre?

Movie theatres are history. I watch movies on my PC. The last one I saw in the real theatre was the Pakistani movie Khuda Ke Liye, a surprisingly well-done story of an arranged forced marriage and clash with fundamentalist Islam.

So the last movie you saw online?

It was a documentary about Welsh communities in Patagonia.

Do you watch any Czech TV shows?

Castle bodyguards made me aware of the TV crime drama called Atentat, loosely based on the Office of the Czech President. A crazy but funny story, especially if you know the real characters pictured there.

Is there a character in that show that plays you?

Not yet, but I wonder as what I would be pictured if ever I was an inspiration for a character.

As a semi-professional chef, what did you make for dinner last night?

You give your interviews with a smile and some people think that you are one of those who loves to hear himself talk. What do you intend to achieve with smiling?

I am so focused when on camera that I do not follow every gesture of mine. Quite often a smile is just the automatic reaction and confirmation that I used to be an introvert.

I found that sometimes the Czech media are not patriotic. There were so many historical and important events in the country, but they cover only what is negative or controversial. In your opinion, what are some great historical moments of the Czech Republic?

I totally agree. We somehow seem to be genetically negativistic. The result is that even the current engagement we have in Syria will definitely be a footnote in textbooks of diplomacy, but I guess it will not be a Czech textbook. Exactly as it happened a few years ago when our engagement helped end the civil war in Sri Lanka.

Over the years, key people from different governments all over the world have sought your opinion on solutions of current problems: for example, Israel/Palestine; or ISIS; what is your vision of peace in the Middle East?

Realistic. Peace is the time between wars. And we must do everything possible to prolong these periods.

The media love to cover you. Any conspiracy theory about you that you find most entertaining?

These theories are somehow too unintelligent to be entertaining. If I follow conspirators’ logic, then I would probably have to be Israeli Mossad, Russian FSB and Pakistani by now and all at the same time.

Do you get upset when the country makes diplomatic faux pas? What makes you upset?

When I watch something going wrong in front of my eyes without a chance to do something with it on the spot.

For example, when we closed the embassy in Kenya as part of austerity measures just to reopen it two years later. You lose money to get where you have already been. And then doing the very same in Colombia. Simply things like that.

It is a known fact that you collect hot sauces but do you know the actual number of them? Have you ever counted them?

Never. My best guess would be between one and two hundreds little bottles. But I suspect you ask me about that to learn if I have a way of finding out how many of them you have already consumed. If I am the collector, you are the chili eater.

I took pictures of the most remote places where journalists tried to find you. Any particular place that journalists got you, but I wasn’t around with the camera?

Naturally, a bathroom. You don’t know about this but some years ago I flushed down my cell phone when an unexpected phone call surprised me there.

Hynek Kmoníček is a Czech career diplomat and one of the most prominent political voices of the Czech Republic, currently serving as a Foreign Policy Advisor to the President of the Czech Republic, and as Director of the International Department at the Office of the President. He started his diplomatic career in 1995 as a desk officer at the Middle East Department of the Czech Foreign Ministry. Since then, he served as the Permanent Representative to the United Nations and held roles of the Czech Ambassador in India, Australia and other countries. Graduated from South Bohemian University, with majors in classical guitar and pedagogy, he later earned a degree in English language studies from Charles University. Hynek Kmoníček also holds a degree in classical Arabic studies from Charles University and finished his studies at the post-graduate programme of modern history of the Middle East at the Hebrew University of Jerusalem.