“Good Diplomats Are Looking for Challenges Even at Easy Times.” 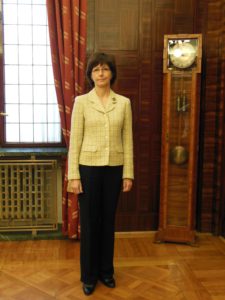 I was looking forward to using the opportunity of accompanying my husband as a spouse to Belgrade to interview H.E. Ivana Hlavsová whom I consider one of the most expert and also universalist career diplomats I have ever met. Flying to Belgrade with Air Serbia on ATR 72 already made me nostalgic and reminded me of my diplomatic travels to Luxembourg, since it was operated by the same type of aircraft. But I was curious to hear about the more substantial changes that have taken place in diplomacy in recent years, besides the fact that most travels have become more comfortable. The nostalgic mood continued when I was in Belgrade. Friendly, welcoming people, language and culture similar to ours, I remembered not only my trips to former Yugoslavia but also my studies and research about pan-Slavism. So the second issue of Slavic brotherhood became imminent given the expert background of Mrs. Hlavsová and her profound knowledge of the region. Regular readers would have probably guessed by now that leadership and women in diplomacy represented the last topic discussed.

Mrs. Ivana Hlavsová originally graduated from the Czech Technical University in Prague?. After her experience in private sector, she joined the foreign relations department of the Office of the President in 1992; since 1993 she has been working at the Ministry of Foreign Affairs. Throughout her diplomatic career, she was appointed to several leading position in various sections and departments at the MFA. Her career journey so perfectly demonstrates how versatile and changing diplomatic service can become. She led the Diplomatic Protocol department, became the General Consul in Los Angeles, then director of the Americas’ Department; later she was appointed the executive director of the Czech Task Force for the NATO Summit in Prague, and was also leading the whole Personnel Section of the Ministry, was an ambassador to Slovenia, director of the South and Southeast Europe department and in January 2014, she was appointed as the Ambassador to Serbian Republic. She speaks three foreign languages fluently and can communicate in Serbian.

Mrs. Hlavsová, you will celebrate 25 years in diplomacy next year. That truly confirms the saying that diplomacy is not a just an ordinary profession, that it is a life mission.

Looking back, if someone had mentioned to me before 1992 that I would dedicate my life to diplomacy, I would not have believed it. On the other hand, such a change depicts the fate of many people of my generation. I studied at the university in early 1980s and I opted for the technical background because the humanities were very much ideologically influenced by the communist regime. So the specialisation “Automated Control Systems” seemed a good choice. After the Velvet Revolution, I started to work on joint projects with an Austrian company but I found difficult to balance my career with the care of two small children. It was by coincidence that I saw and advert for a position at the foreign department of the Office of the President.  Since I spoke three foreign languages, I decided to give it a go. I was hoping to visit Prague Castle and perhaps have a glimpse of Václav Havel, but nothing more. To my surprise, I received a cable from the post office about me being accepted. So I started in 1992, but soon after the elections came which heralded the dissolution of Czechoslovakia and led to Vaclav Havel’s stepping down from the office. My boss at the time, Alexandr Vondra became the First Deputy Minister of Foreign Affairs and so I followed him to the Czernin Palace. Even at that time, I was still considering a diplomatic career as a temporary issue. But as you mentioned, next year, I will celebrate 25 years being in the foreign service.  The beginnings were fascinating and challenging at the same time. At the age of 33, I was the Director of the Diplomatic Protocol Department, the very post often reserved to the most senior ranking male ambassadors. At that time, there were only two women on the same position in the whole Europe – my colleague from Sweden and I.

You mentioned how fascinating the period of the first decade of the Czech foreign policy was.  Within a decade, we managed to enter NATO, the EU and organise the NATO Summit in 2002 that was the unprecedented multilateral event ever held in the Czech Republic. But now, the diplomacy has become much more “ordinary” business as usual.  How do you reflect on such change?

Looking back, we have managed incredibly fast to fulfill the strategic goals that we set up in early nineties. In addition to the entry to NATO in 1999 and entry to the EU in 2004, we should not forget entry into the Schengen zone in 2007 and the EU Presidency in 2009. So it might seem that we have achieved the goals. We have had other goals since then, but they might not be perceived as spectacular when compared to those already mentioned. We have had to define our position both in NATO and in the EU, and also on the level of international community as such. The world is changing and we have to continue to learn how to face new challenges, such as terrorism. This work is ongoing. Overall, the fact that the so-called “existence” substantial issues are lacking means that they have been fulfilled and that is very positive fact. As we see new threats coming on the horizon, I am not afraid that the life and work of diplomats would be dull and boring in anyway.

You had been ambassador to Slovenia, now you are in Serbia. What brought you to the region of Southeast Europe?

You mentioned yourself that diplomacy is a civil service and the possibility to choose a country or a region exists but it is limited especially on the ambassadorial level. So again, it was a coincidence in the beginning. I opted for Slovenia both for professional and family reasons as I preferred a destination in Europe. I experienced EU Presidency of Slovenia in 2008, followed by the Czech Presidency of the EU in 2009. So again, it was quite a unique moment. Then I became in charge of department of the South and South East Europe; just to explain, it means covering the region all the way from Belgium and France to Turkey, with the Balkans in between. After four years, there was a possibility to go and serve in Serbia. For a professional diplomat, it is an extremely interesting country, since it is on its way to fulfill strategic and economic goals and it is also a key player in the Balkan region.

Now, you being very familiar with the region, how do you see the issue of Slavic brotherhood. Is the saying that “A Slav has a brother everywhere” still valid or did pan-Slavism die at the end of the 19th century?

Let me point out that my answers will be specific with regards to South Slavs and their relations to the Czech Republic. I have experienced Slovenia as well as Serbia, I have travelled elsewhere in the Balkans and I confirm special ties exist between the Czechs and south Slavic nations, including the Croats, Bosnians and Montenegrins. It is hard to say whether it is more due to shared history or it comes from ethnic roots. My personal observation is that ties from past are still considerably influencing current relations. Greater part of the Balkans used to be a part of the Austro-Hungarian Empire and I see many personal and family ties that translate into mental ones. The Czechs and Slovenians used to be particularly close as they were the only two Slavic nations in the Austrian part of the Monarchy. Last but not least, language similarity plays a considerable role in easier mutual understanding. The case of Serbia was totally different, but they also played an important role. As Serbs gained their independence already in the 19th century and so together with the Montenegrins they were regarded a symbol of Slavic fight for independence in the Czech lands. The answer to your original question perhaps got more complicated but the fact is that there are no easy and straightforward answers in the Balkans. 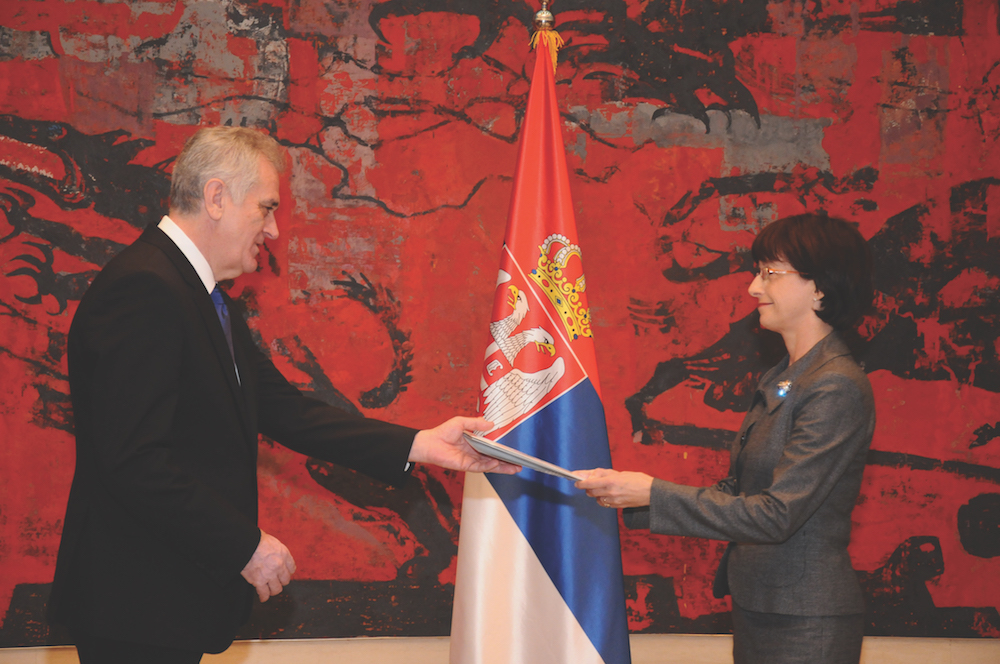 From left: Tomislav Nikolić, President of Serbia and H.E. Ivana Hlavsová, Ambassador of the Czech Republic to Serbia

You touched on the importance of historical roots that were supported by intensive diplomatic ties during the first Czechoslovak Republic. How much were the relations affected by the wars during 1990s?

The answer to your question is linked exactly to the excellent diplomatic relations with the countries of the so-called Small Entente, an alliance formed by Czechoslovakia, Yugoslavia and Romania in 1920 and 1922, further supported by France in bilateral treaties. It is no wonder that the exquisite and large building that our embassy is located in dates back to 1920s and together with embassies in Bucharest and Paris, these buildings belong to the most beautiful representative buildings we have ever had. This very fact shows the importance of the mutual relations that lasted until the World War II. Following the relationship built throughout the 19th century, many Czech and Slovak artists, architects, engineers visited the region and continued fostering mutual relationships that went far beyond the horizon of the top political and diplomatic relations. The importance of the Small Entente might have been forgotten in the Czech Republic; however, it is still very well remembered and recognised here. The next historical moments are represented by the Velvet Revolution and also by the Velvet Divorce, both of the events highly valued given the violent fate of the region in 1990s. The consequences of the conflicts, not only political, but also economical can be still witnessed until today. The overall frustration and despair over the lost decade is still present. However, back to bilateral relations, as they were built on the solid foundations, they continue to be very positive. We touched upon all similarities and common shared history.  The Czech Republic is a proud partner to support Serbia in reaching strategic goals, particularly joining the EU.

Last but not least, this question will touch upon the issue of women in diplomacy. You mentioned that in the early stage of your career, there were the only two women on the position of the Director of the Protocol. How is the current situation at the Czech Ministry of Foreign Affairs?

I regard this question to be the most difficult of those you have asked. For twenty years, since I have been in the leading positions at the Ministry, I have been interested in this issue.  I did my own statistics with regards to the number of women at the top positions, such as General Consuls or Ambassadors. We have not managed to exceed considerably the steady number settled at around ten percent. The trend of the so called “leaking pipeline” that is known from the corporate world is also present in the public service. Women still make up 50% or even more at the Diplomatic Academy, which is the entry level to the Ministry. To be fair, diplomacy is more difficult for women at the early stage of their career when they are having children. Even though we made sure that maternity leave period would be counted as a period of work according to the Career Code that determines promotions. Greater interest of young women in entering diplomacy is also due to the fact that diplomacy is a part of state service administration which guarantees a stable and steady income. Several years ago a kindergarten was opened at the Ministry of Foreign Affairs and we managed to introduce “job-sharing” to offer part-time work for women returning from maternity leave.  So, overall the situation is improving. What is interesting to mention is that there are more women in leading positions in the public service in the Balkan region. This might be one area where the region can be inspiring for us.