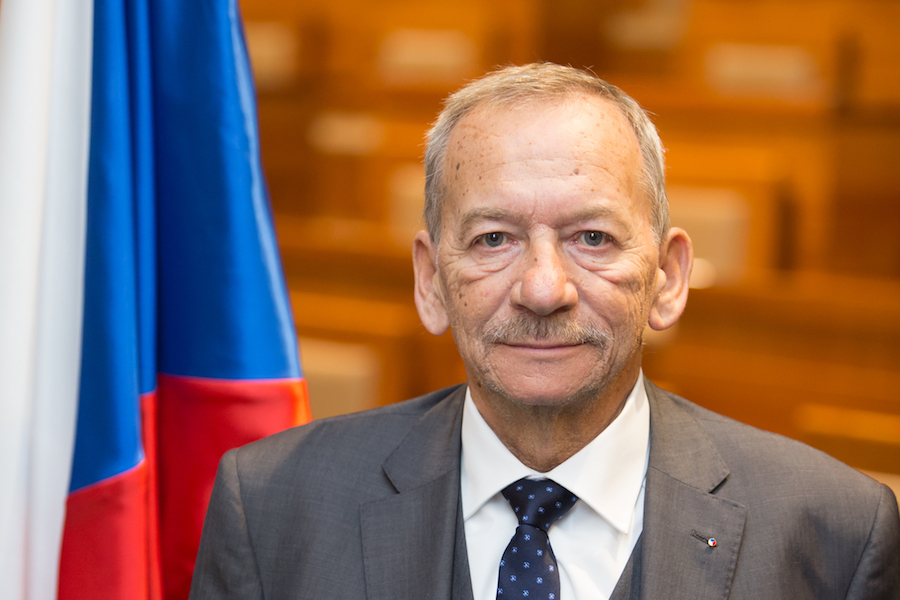 Jaroslav Kubera, President of the Senate

!!! This interview is also available in Czech! Just click here. !!!

President of the Senate of the Czech Republic, Jaroslav Kubera, one of the most distinctive figures in Czech politics, is best introduced in figures. He has been a constant feature of the upper echelons of politics since 1994. He has won his municipal elections seven times, and won senate elections four times. He is known for his controversial proposals, many of which not even his closest party colleagues know whether he means them seriously or in jest. What he enjoys about politics is the debate. He stays true to himself, and while he enjoys debating with voters, he sees no reason to change or adapt his opinions. Jaroslav Kubera is a champion of freedom (including for smokers), a critic of excessive regulation and the European Union – especially grant programmes (although he does not support Czexit), and is a thorn in the side of many feminists, although he does not take the issue of domestic violence lightly. Our discussion was not about the topics listed above, things we do not agree on due to the different social “bubbles” we inhabit, but rather focused on wider social issues in which we might instead find a certain level of consensus. It was nice to see that two people could hold a civilised discussion without having to agree on everything. This is the freedom of speech we demonstrated for 30 years ago. We should remember the words of Karl Popper, author of the opus The Open Society and Its Enemies, who wrote that a nation through democratic debate could come to the conclusion that there is no ultimate truth. Society can advance through the process of intellectual investigation, submitting ideas to criticism and abandoning them where opposing evidence is found.

Mr. President, you’ve spent a quarter of a century in top politics. Is this a cause for celebration, or for taking stock?

Well, politics is the second love of my life, right after my wife. We’ve been married a long time, and I’ve been engaged in politics since 1962. Few today can remember the era one might characterise by the slogan “We shall have meat, comrades”, Antonín Novotný at Letná park, or listening to Radio Free Europe and Voice of America. History and events have subsequently gained momentum. 1968 is of much greater importance for me than it is for someone who didn’t experience it. Since that second liberation, I’ve simply had an issue with Russians. On the other hand, I’m not an advocate of hysterical campaigns or the latest fashionable issues, such as global warming or the fascination with electric cars. People often say today that things were better under the previous regime. In terms of my personal life, that’s certainly true. In summer, I used to work from 6 in the morning until 2.30 pm, mostly we ended at two, and we went off to surf. In winter, we went skiing instead of surfing. Today, I only have memories of having time for hobbies; this winter I only went skiing once when attending an off-site meeting. The era was quieter, and probably simpler. One of the roles I have that I really enjoy is receiving ambassadors. In meeting them, I realise not just how complex the world is, but also how accelerated it is. And on top of all that, there is the impact of technology, which prevents us from recognising what is true and what is not.

Still looking back, did you celebrate the 15th anniversary of joining the EU?

I’m a critic of the European Union and how it works. There is a parallel with an unhappy marriage in which both partners remain in the relationship, dissatisfied, because the benefits outweigh the losses. The grants we receive, even if they are used just for building lookout towers in valleys, are a big draw. On the other hand, it is nonsensical to talk about Czexit: I disagree with Václav Klaus Junior on this, in contrast to climate change. I feel it is dangerous to fall prey to fashionable trends, whether they are about global warming, or the latest issue of electric cars. Europe is in danger of destroying its traditional car industry, and what happens next when it proves to be a blind alley? Can you imagine the Jižní Město estate with the same number of electric cars as there are standard cars today? We’re lacking critical thinking. I myself apply this rule: “Consider it once, consider it twice, consider it three times.” You’ll then often come to the conclusion that your first idea was totally stupid. It’s the same with legislating. It seems to me that laws are passed blindly, and only afterwards amended. In early May, the government declared that children should not have to pay the debts of their parents. This should surely be the standard situation, and our case when we let children grow up and then send the bailiffs in must be an anomaly. But what is being focused on? The Register of Contracts and opening hours during public holidays. Things for which I believe regulation is unnecessary.

Let’s turn from everyday worries and tribulations to celebrations. This year, we’re celebrating 30 years since the Velvet Revolution. When you look back at that time when we stood in squares and jingled our keys and compare it to the situation today, how do you see it?

I don’t think there was any other way. I’ll give you another comparison: kids are playing in a house where there is a big aquarium. One of the kids smashes into the aquarium, it breaks, the water pours out and the fish are flapping about on the floor gasping the air. Our task is to put the aquarium back together as quickly as possible, and if possible put the fish back in it alive. We did all that without knowing what glue we needed to use for glass. That’s our story. Experts from the USA told us then that the transformation from socialism into capitalism would take a few years, but the transformation in people’s thinking on the change of regime was a matter of 50 years. They were right. Still today, we cannot stomach the changes to some extent, because they caught each of us in a different situation. The best examples come from life. Take two classmates. Before 1989, these two classmates, one who did well at school and the other badly, worked in one factory. The academic classmate stayed in the factory, while the one who failed set up his own company and became a billionaire. The straight-A student cannot understand how his previously unsuccessful friend has got so far. And please note these are not cases where there is anything sinister behind the success. I know cases of smart craftsmen who have worked their way up step by step. We all know the cases promoted by the media and the cases of failure. But do we pay the same attention to those successful companies who are renowned around the world? So the bottom line is that there is no reason not to celebrate. Our transformation was a clear success. I’m afraid it will turn out as it always does, with demonstrations held and abuses pointed out, while celebrations are very much downplayed.

Is negativism one of the Czech traits?

I don’t think negativism itself is a typical trait of Czechs alone, in contrast to envy. I’m afraid that if you set up a global ranking of nations according to envy, then Czechs would be at the top, as they are in alcohol consumption. So let’s look at the role of envy in a wider historical context. Self-sufficiency is also reflected here to some extent. That’s why so much was stolen and is stolen in the Czech Republic, including the historical aircraft that flew here in May 1945 to the airport in Kbely, when we Czechs immediately took them apart, because we Czechs could and can make use of anything. We don’t tend to hire gardeners; we prefer to dig our soil ourselves, even when we find it tiresome or we’re not good at it. Abroad, better-off families have a housekeeper to look after the household. That’s not customary here, having a stranger in our home. Moving is another parallel. American experts have recommended that Czechs should learn to move for work. But for someone with a house, with a garden, with rabbits in it, and cats and their granny in the house helping with the kids, the idea of moving 100 km for work is inconceivable. Who would want to move into a flat that had previous tenants and use strangers’ furniture? I’m sure most people even bring their own balls to bowling… (laughs)

Do you miss municipal politics?

I still head the financial committee in Teplice, and it scares me how much we spend. It’s common in the Czech Republic that we all want to own our own home. People take out bigger mortgages than they can afford, and in 20 years city mayors are going to have serious problems with people who have become homeless because they lost their house due to an inability to repay their mortgage as a consequence of illness or job loss. Anyone who takes out a loan can lose huge amounts. There’s a parallel with grants here. We look at grants differently to our own money. I think cashless payment is another phenomenon that is going to have unintended consequences. Banks don’t have money anymore; they have spreadsheets. But I was glad to leave behind the GDPR personal data agenda for good. On the other hand, we are witness to the theft of personal data on an unprecedented scale through various apps in our mobiles. And where is the state protecting us? Sure, you always have the option of not downloading the app, but then you can’t use the sat-nav or your camera. More regulation won’t help here. Quite the contrary. Restrict who can access what information. It scares me that they’re planning a law that the police of the Czech Republic will be able to look at our bank accounts without consent from the Czech National Bank. It’s the principle of it. What’s it to anyone that I bought a lawnmower? Why should the state take an interest? And it’s all justified by doing good, and those involved justify it by saying they are doing good for others, even though they’re not asking for it. But when alimonies aren’t paid, the state doesn’t know what to do. I propose confiscating passports from those who aren’t paying so they can’t go on holiday outside the EU. They go to Egypt, but don’t pay for their kids. And they know the ombudsman would oppose it.

You’re known for your sense of humour. I’m surprised you haven’t lost it after all those years in politics.

Leaders should have a sense of humour. Remember Jan Masaryk. I think without humour I would go mad. I’m often criticised for my humour. When I became President of the Senate, I was advised to take things more seriously. But people write to tell me not to change, and I’m staying myself. I think authenticity is absolutely fundamental for a leader. I stay myself and I speak to people entirely openly and naturally. And my voters appreciate that. I certainly couldn’t be a funeral speaker.

And your message for Czech and Slovak Leaders readers?

I think we should all answer the question of whether it was better under the last regime honestly. Take a look at your receipt at the supermarket, as long as it isn’t closed for a public holiday of course. Make a coffee and admit that it wasn’t better. And let’s celebrate our freedom. There are problems, but let’s not spoil the anniversary. We can demonstrate on 16 November, or 18 November, but 17 November? Let’s have a proper celebration. Would anyone ever think of demonstrating on their own birthday?

This interview is also available in Czech! Just click here.