I am proud of my Czechoslovakian Roots 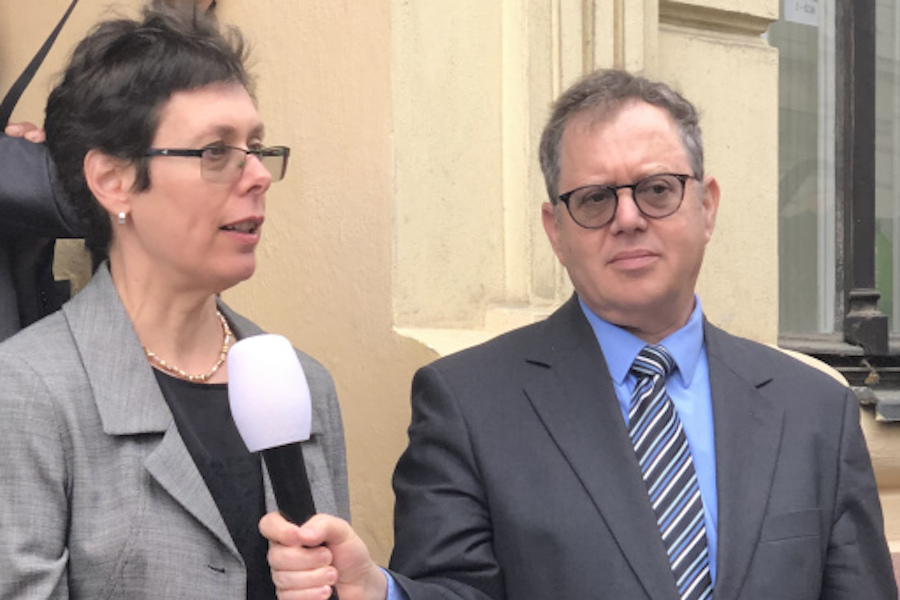 Jill Meron, wife of H.E. Daniel Meron, the Ambassador of the State of Israel to the Czech Republic

Jill Meron is not only the wife of H.E. Daniel Meron, the Ambassador of the State of Israel to the Czech Republic, she is a mother of four, a shy but significant volunteer for many community activities and more recently, a dedicated family historian. When coming to Prague she knew that, this time, her husband’s posting would be a different one, as they arrived in a foreign country for the first time without their four adult children who remained in Israel studying and working. Little did she know that discovering her family relatives would lead her to a new mission: becoming a family genealogist. She ensured that memorial stones called “Stolpersteine”, which commemorate victims of Nazi persecution, were laid in Olomouc for three Lindenbaum family members, with their names, dates of birth and dates of death. Jill managed to accomplish a procedure that usually takes years in several months. Our readers might find it interesting to know that more than 70 000 Stolpersteine have been laid so far which makes the Stolpersteine project the world’s largest decentralized memorial. I met Jill in my favorite café at Slovanský dům garden. During our interview, we discussed not only the past and the Holocaust legacy but also the promising current stage and future of Czech-Israeli relations, shared views on motherhood and dual-career marriages and, last but not least, Jill’s various involvement in Prague charity and community life.

Let me begin with a famous Elie Wiesel quote that you used at the end of the Stolpersteine ceremony. “One person of integrity can make a difference”. In the general public view, the Stolpersteine is linked to the past, while you linked it to the present. You said you did it not for those who died but for your children and other children.

I wanted my children to realize how my family and the Lindenbaum family and their fates were closely related. It could have been my children’s grandparents just as easily. My grandparents were fortunate enough to escape from Vienna to London just after the annexation of Austria by Nazi Germany, the Lindenbaums were less fortunate and had nowhere to go.

You knew that you had Czechoslovakian origins that you are proud of. Has the discovery of the fate of other family members changed your perception of the Czech Republic?

I spent two years on the process of researching that led to the ceremony. It was an incredible learning process. I knew that I had family roots back in Uherské Hradiště. My grandmother used to tell me stories about going from Vienna to Uherské Hradiště and spending time with her Berger family cousins. However, the Lindenbaum family was from my grandfather’s side and my grandfather did not talk about his family. The whole process brought me into contact with historians, archivists and many other people I would not have met otherwise. Everybody was just so willing to help get as much information as possible. It was surprising to see how many people here care about the Jewish history. And so many people in the Czech Republic have Jewish heritage or roots. What made me sad is how little the Jewish life has been reflected in the modern history of the country. Yes, there was the Holocaust but I wasn’t aware of the fact that surviving Jews were not allowed to live as Jews after 1945. I didn’t understand the impact of communist persecution on Jewish life, the impact of the communist infiltration into the Community and other factors.

There was an interesting research presented on the occasion of the Czech- Israeli Innovation Day, addressing the “Neurobiological and psychological markers of reaction to extreme stress and its impact on offspring: a three-generation of Holocaust survivors and their offspring” carried by the Masaryk University. The issue of second and third generation of Holocaust survivors has been one that resonated within the Israeli society for the last couple of decades. The research proves that despite higher stress, survivors and their families also possess higher resilience and sense of fulfillment. How do you view the impact of your family experience on your life, as you mentioned that the Holocaust was part of what motivated you to leave England and move to Israel in 1985, as a 21-year-old graduate?

My childhood was heavily influenced by the Holocaust. In England, it is very common that as a sign of respect, you call you parents’ close friends auntie or uncle. My grandmother would never allow my mother to do that because all her real aunts and uncles were killed by the Nazis. We would never buy a German car or any other German products. This being said, we never considered ourselves as Holocaust survivors. Even if the case could be possibly made, as my grandparents left Vienna as refugees the day after the Nazis came. Personally, it never crossed my mind to associate any of my personal characteristics to my grandparents being refugees.

Let us move from the family past to the issue of motherhood. You have a profession of your own, at the same time you have been following your husband and supporting him in his career and raised four children on three continents. How do you see the reconciliation of the roles of a wife, a mother and a working professional?

I grew up in a different era. When I met my husband, he was already a cadet (attending Diplomatic Academy training – note by LŠ) in the Foreign Office and it was clear what his career path would be. I do not have a problem giving up on a career in order to give Daniel the opportunity to pursue his career. On the other hand, Daniel in pursuing his career, has always made choices that will allow me both professional satisfaction and prioritize our family values. As Daniel and I are both immigrants to Israel, we agreed that both a strong Jewish education and developing strong roots in Israel is important to our children. We made the decision to spend significant time in Israel between diplomatic postings at the expense of Daniel’s career. We also made the decision that Daniel would apply to a position to the US where I would be able to work and our children could attend a Jewish school. As in any relationship, partnership is important. There has to be give-and-take and the understanding that what is right for one person is not necessarily right for the other. Having said all that, I am not sure that if I had been born thirty years later, I would have thought in the same way. And I am sure that our daughters today have different expectations than my generation had.

Prague is the first posting where you do not work professionally, however, you have been incredibly busy and engaged in many community and non-profit organizations. On top of keeping up with the very busy schedule of Daniel, how do you manage to fit so many activities of yours?

I must say that not being engaged professionally was purely my decision. I said to Daniel that it could be reversed at any time, since I know I am highly employable. But it is true that over the course of two years, I have become incredibly busy that now I truly do not have time to work professionally. The advantage that I see is that I have the privilege of choosing. I can look at my calendar and in case of conflicts, I can make a choice. Not many people have that luxury. Literally, right before I moved to the Czech Republic, I was approached by the Diplomatic Spouses’ Association to become a Treasurer. I did not know that association but I said yes. I have never been a treasurer but I knew how to work with numbers, so I agreed. For the last two years, I was treasurer of the Diplomatic Spouses’ Association and each year we donated more than 2 mil. Czech crowns to various Czech charity organizations which I consider an amazing achievement. I have also been involved in the International Women’s Association of Prague, now I am the Treasurer there. I have been devoting so much time to family research which is a full-time job. The last two years, I have been researching my family, now I have begun to research Daniel’s side. It is much harder, because my father’s family name Brody, originally Brodawka, made it easier and my mother’s family name was Kriss, which is really very rare. My husband’s family name is Miller, so it will be rather challenging. As his family comes from a different part of the world, I am looking to start my research from scratch. I have been also active within the Jewish community. I love travelling with Daniel around the country and to enjoy the unique opportunity to see places that tourists would never get to.

After two years being here, what are your impressions about the Czech Republic and the Czech people?

I think it is a beautiful country and I am proud to be partly Moravian. We went to Písečné, a very small town, and I found the graves from 1830’s that belonged to my great grandmother’s grandparents. Unfortunately, the cemetery in Uherské Hradiště was destroyed, however I managed to meet my cousins living in Uherské Hradiště and Jeseníky. I miss my children and yet no matter, how much I enjoy this beautiful country, I really feel that my home is in Israel.

The Czech Republic, next to the United States, is the best ally of Israel. What is the potential of further strengthening of mutual co-operation that goes on not only on the governmental level but also to the level of individuals?

On the Czech side, I see language as a problem. Too many Czechs do not speak English. However, I am pleased to have met many Czechs that are exploring the opportunities of doing business with Israel. On the Israeli side, Israelis need more educating about the opportunities that the Czech Republic offers. The best way to do that is on one-on-one level,like you do with your women entrepreneurial missions. If there is a personal touch, everything is easier. Israelis should know how much Israel is loved and respected in the Czech Republic. Israelis know about the history, but they should be told more with regards to the current relations and opportunities. As for Czechs and the potential for cooperation, I think they need to understand that Israelis are like sabra, also known as prickly pears – prickly on the outside but soft on the inside.