“We are facing tremendous external challenges” 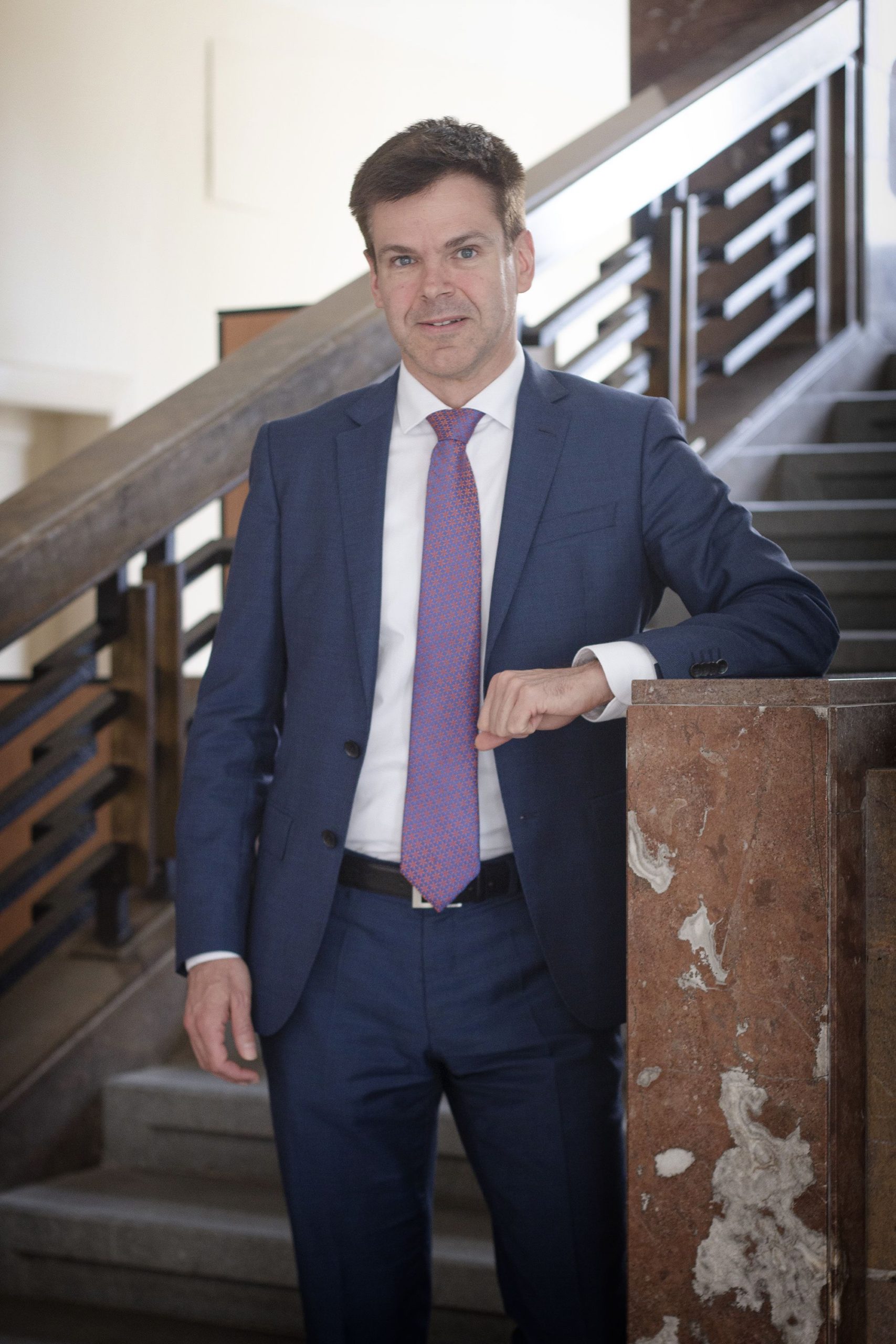 Jiří Georgiev is a lawyer and an experienced professional in the field of European policy. Simultaneously, he also lectures externally at the Faculty of Law at Charles University in Prague. Previously in his career, he was an inter alia adviser to the Senate Committee on EU Affairs, the deputy director-general of the European Affairs Section at the Office of the Government, and director of the Legal Department at the Ministry of Agriculture. Due to his long-term experience with EU policy, he was appointed Deputy Minister responsible for International Relations and the Financial Markets Section at the Ministry of Finance, as of 1st April 2022. In this position, his pivotal task is to participate in the preparation of the Czech presidency of the EU Council in the second half of 2022.

The presidency of the Czech Republic over the EU Council starts on 1st July 2022. Which issues do you believe we will be able to make the biggest impact on?

During our presidency over the EU Council we will have to face the crucial external consequences of the Ukraine crisis. The war in Ukraine and its humanitarian and economic impacts are, without any doubt, the biggest challenge we have to deal with, not only in Central and Eastern European member states.

On the other hand, we should not forget about efforts for economic recovery after the pandemic, caused by Covid-19. Although there were some obstacles and bottlenecks, the economic recovery in the EU was well on track before the 24th of February. Now, one of the main tasks for the EU during our presidency will be to provide maximum support to Ukraine and its citizens, and, at the same time, to foster and protect the economic growth in the EU.

Last but not least, we also have to keep in mind that the pivotal role of the Council Presidency is to keep the everyday agenda running. The Presidency is responsible for the day-to-day work of the Council and all its preparatory bodies. Despite the tremendous external challenges that I have mentioned, we would like to move the legislative files on the table forward.

Which aspects and areas of the war in Ukraine will affect the Czech EU presidency the most?

As I have already mentioned, this war will have an enormous impact on the course of our presidency. We will have to reflect on the current situation in our presidency priorities, and the Czech government has decided to overhaul its previous plans.

To be more specific, we will have to deal with the economic consequences of the war, the influx of refugees, and the implications for the energy sector and the EU budget. In a broader context, we will have to solve soaring energy prices, stability of energy supplies, and problems with supply chains. It is obvious that neither the national government nor the EU can solve everything. Our task, however, is to create the best conditions for allowing households and businesses to adapt. Simultaneously, we should avoid tensions – the pivotal task for the presidency is to keep the unity of the member states in substantial affairs.

What in particular do the people of the Czech Republic expect from this presidency?

This is a difficult question. Most people are rather busy with their own private issues, and they do not have time to study the nuances of the presidency and its implications. Certainly, it is a very relevant topic to professionals and pundits. However, I guess that people expect the EU to devote enough attention to economic and security issues, as there are many of those in these difficult days. And I suppose that people may expect from our presidency that we focus on the economic situation, energy prices, availability of energy, and many other issues. Hence, the Czech government decided to substantively review its priorities in order for the presidency to reflect the current situation.

The second aspect of the presidency is that EU and European policy will be more in the spotlight. In this respect, I believe that there is a unique opportunity to show what the EU can do for the people. On the other hand, although we have reached an unprecedented level of integration, there are still areas where the role of member states is essential.

So, to conclude, I am convinced that citizens expect that their problems and worries will be heard and reflected. Therefore, we have an opportunity to bring the EU, its role, and its competencies close to the citizens.

Which councils, working groups, and committees of the Council will be chaired by the Ministry of Finance?

The most important and challenging task will be to prepare for regular ministerial meetings. The Economic and Financial Affairs Council (ECOFIN) is the platform where the major decisions in areas of economic policy, taxation, financial services, or EU annual budgets are taken. Therefore, proper preparation is crucial. Moreover, there will be a regular informal meeting of ministers of finance and governors of central banks in September. This so-called Informal ECOFIN is one of the most significant events in Prague during the entire presidency.

Apart from that, my colleagues at the ministry will be responsible for chairing the tens of committees and working parties responsible for technical works at the expert level before the files are ready for adoption by the Council. These so-called Council preparatory bodies cover a broad area, ranging from economic and financial policy to taxation and budget issues. And of course, the better the preparation at
the working level, the better the outcomes at the level of the Council.

You are an expert in the field of European, constitutional and administrative law. Can the Czech Republic lead any major changes in this regard during the presidency?

Of course, the Presidency does not exist in a vacuum, and it is not established on a „greenfield“. You are always working in a broader context and continuity is a relevant aspect of your work. You start where the previous Presidency finished. And you have to keep in mind that after six months, your work will, hopefully, be assumed by the next Presidency. Nevertheless, our previous historical experience influences our presidency, not only in economic terms, but in the attitude to the Ukraine crisis as well. Therefore, some Czech tracks could be subsequently visible.

What steps will the Czech Republic take towards adopting the Euro during the EU presidency?

Firstly, I would like to underline that the presidency does not play any special role in the process of Euro adoption. You are correct that the Czech Republic is legally committed to adopting a single currency. However, there is no specific date for doing so in regards to timing. We are not in a hurry, and it is entirely up to the government to consider how to set up a timetable for Euro adoption. The key factor in this regard is the level of economic convergence and the degree of economic alignment of the Czech economy with the Eurozone.

Therefore, every two years, the Ministry of Finance and the Czech National Bank prepare a document titled „Assesment of the Fulfilment of the Maastricht Convergence Criteria and the Degree of Economic Alignment of the Czech Republic with the Euro Area“. Given the current situation and high level of uncertainty, the latest report‘s outcome, which recommends that the Czech government should not set a target date for Euro area entry, for the time being, is still valid.

What do you consider would be the biggest Czech EU presidency achievement, for both the country and you personally?

Under this exceptional level of uncertainty that we are now facing, it is not easy to make a plan with clear goals for the next six months. You can do your best in the planning and preparation, but over one night the stage can inevitably change by an incident out of your control. Therefore, I will be satisfied when the Czech presidency will have fulfilled everything that is expected of it in terms of the day-to-day work and keeping the Union moving forward. Personally, I hope to confirm the reputation of the Czech Republic as a respected and solid partner in the community of EU member states.