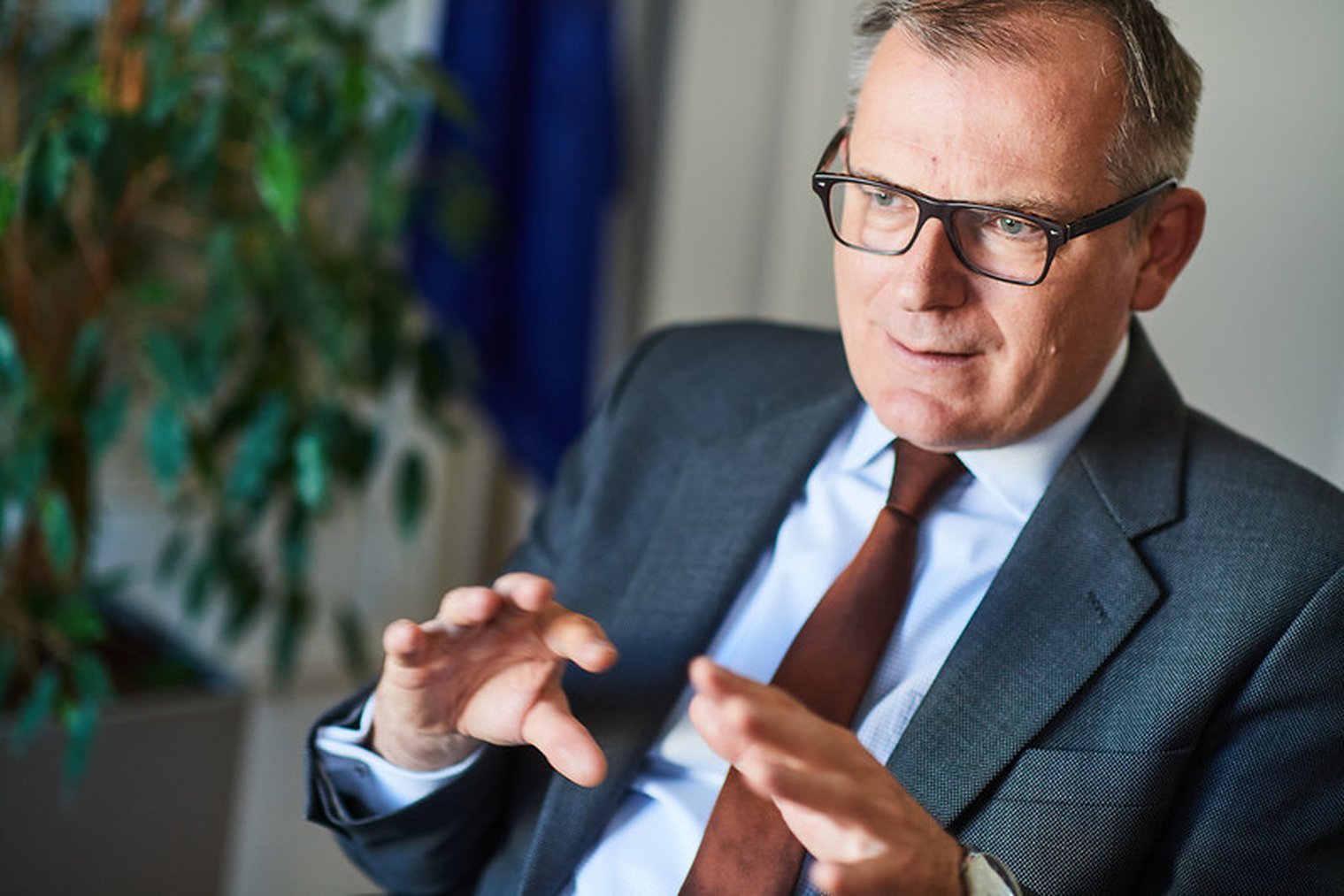 This interview with the second-highest Czech international official, one rank below the EU Commissioner Věra Jourová, a three-star director in the EU terms, was truly very special for me. Mr. Šedivý is the first Czech official to reach the highest expert functions both in NATO and the EU. Yet, there was also a more personal reason – Jiří Šedivý was my first superior. In 2001, when he was the Director of the Institute of International Relations (IIR), he asked me to join the Diplomatic Academy and to combine my interest in international relations enhanced by the dimension of training and development. From the IIR, Mr. Šedivý pursued a Czech and international career. He served as the Minister of Defence of the Czech Republic, Vice-Secretary of NATO responsible for defence policy and planning, Czech Ambassador to NATO and the Special Envoy for the New Security Threats at the Ministry of Foreign Affairs. Due to Covid-19, he assumed his position at EDA after a month delay, in early May. During our WebEx call, we discussed security issues, EDA’s role, and Mr. Šedivý’s vision but also his outstanding career journey. What does it take to be a successful candidate at the EU institution? What is his career advice to younger colleagues?

Mr. Šedivý, congratulations on your appointment and many thanks for the interview. Before we discuss your role and vision at the EDA, let me ask you as an expert on international relations and international affairs, about your view on the current pandemic. I remember we met for the first time after September 11, 2001, and at that time you held many lectures in terms of continuity and disruption on the new world order. How do you perceive the current situation? Are there any parallels or contrasts?

It is always tricky and to some extent even dangerous to compare global crises and watershed events, such as 9/11, the financial crash of 2008 or the current Covid-19 pandemic. Each of them has its different roots, developments, and ramifications. Therefore, the possible impact on the world order is also different. However, it is obvious that the post-COVID-19 world won’t be the same as the one we knew before.

If you ask me what main geostrategic implications and its consequent massive economic and financial costs of this pandemic could bring, I would say that it might probably further accelerate the trend towards more assertive, self-interested and confrontational “power policy” between the big global players. The big question for us is whether Europe will have its place among them. I fully support what Josep Borrell, the High Representative of the European Union and Head of EDA said, that Europe must urgently develop a much stronger “appetite for power” in the world.

What does it take to be a global power and why is Europe falling short of it?

As a continent and economic political unification project, Europe certainly appears as a global actor par excellence, at least on paper. With its vast internal market, its strong national economies, its technological excellence and innovation leadership, its highly educated people, stable democracies, and modern Armed Forces, Europe has all it takes to play a leading role in the world. The reason why this is still not the case is that all those winning ingredients are not used together in the cooperative way they should, in terms of a closer European Union.

The political, economic, and geostrategic power of a truly united Europe would by far exceed the sum of its individual Member States. In order to unleash Europe’s extraordinary potential, member states need to engage in real, deep, and sincere cooperation, at all levels, including the one in defence policies and capability development. If that was to happen, Europe’s place at the global powers’ table would be guaranteed. It’s high time for Europe to rise up to the challenge. Perhaps the COVID shockwave could be the successful wake-up call for the needed change.

You mentioned that the importance of the EU defence cooperation has grown during the times of pandemic. What is your vision of strong EDA and how can we make sure that strengthening European defence will not come at the expense of trans-Atlantic ties with NATO?

My vision of EDA is that of an Agency that continues to be a strong, flexible and efficient defence cooperation platform and expertise hub that is used to the fullest extent by its member states, which is not the case yet because there is still unused potential – for initiating and developing collaborative projects in the research and capability development domains as well as in support of industry. I also want the Agency to focus more than ever on delivering concrete outputs, joint capabilities that respond to real needs and shortfalls, capabilities that make our Member States’ Armed Forces stronger, more efficient and more interoperable. As a result, this will make the European Defence stronger. Finally, I want the Agency to remain firmly established in the EU defence cosmos and continue to use its specific institutional nature for the benefit of European defence: an intergovernmental Agency that serves Member States (as defence is and remains a national competence) while at the same time pursuing the wider European interest and keeping the focus on common European capability priorities.

I believe that all of the above already answers your question, EU defence is not at all at the expense of NATO – on the contrary! EU defence cooperation is not meant to replace NATO, but to strengthen it. The shared objective of NATO and the EU is to ensure the security of their citizens and to enhance the transatlantic bond. Both play complementary roles in providing security in Europe. EU defence cooperation is built on the common and undisputed understanding that NATO is and remains the cornerstone of Europe’s collective defence. However, a stronger EU makes NATO stronger. Efforts to enhance the Europe of Defence will strengthen NATO’s European pillar. All EU defence efforts and this includes what we do here at EDA, are meant to be complementary to NATO, avoiding no unnecessary duplication.

My favorite question is about the “known-unknowns”. What are the main facts the general public should know with regard to current major threats and the ways to address them?

The major threats we currently face are more or less known. It is important for me to highlight that in this very “list” we cannot and should not exclude more traditional threats. Especially today, when Europe and the world are still fighting with the ongoing COVID-19 crisis and a lot of attention is rightly put on overcoming the pandemic, but armed conflict still cannot be excluded.

Having said that, the so-called hybrid threats are of course to be prepared for, especially as regards cyber defence or disinformation campaigns while a third major threat certainly stems from terrorism or other kinds of extremisms which unfortunately can lead also to various paramilitary activities.

When analysing threats, we carefully have to look not only at potential threat actors but also consider factors: in terms of actors, I would argue that today we see a return to a global power competition based on Realpolitik. And in terms of threat factors, it is indeed paramount that we thoroughly analyse and prepare for their impact. The first of these factors is climate change. Much has been written about the potential security implications already and I only want to highlight its likely impact on the global demographic balance, questions of increased migration flows or conflict over natural resources.

The second factor then is the potential impact of disruptive technologies such as artificial intelligence, autonomous system, robotics or the internet of things. These technologies are not only changing our everyday life but also revolutionise warfare.

As you can see, the threat landscape has certainly not diminished. What is important to remember is that no European Member State today is capable of facing these threats in isolation. Cooperation and unity of Europe also in the domain of defence is what makes us stronger.

I am talking to you as one of the highest-ranking Czechs in the EU organization, what is your leadership and career advice to those aiming for the highest international ranks? The number of Czechs either at the EU or NATO is still low when compared to other CEE countries. What are your recommendations to younger colleagues searching for an international career?

Start as early as possible and make your way up. Foster the grassroots network. And once you reach the top level, be sure to have the support of the government. Being well prepared, well-educated is not enough. One also has to be persistent. The position at EDA was the fifth one I have run for at the EU level. The four previous attempts were not successful, but I did not give up. Study, study, and study again, in order to cultivate professional expertise. However, knowing your agenda is not the key to success as many people think. You must also be able to present it. Do not hesitate to seek advice from experts in this area. Before my interview for EDA, the Ministry of Foreign Affairs organized a mock presentation to the panel of experts. I received honest feedback, which was quite tough but helped me to improve. My guess is that my performance improved 15-20% thanks to this trial. Everyone knows the HR evergreen question “where do you see yourself in 10 or 15 years”. You need both vision and flexibility. Actually, ten years ago was the first time I started to consider the EDA position.

You mentioned the strong government support that was needed. I am glad that the times are changing and more Czechs will be present at the highest positions, as the number of Czechs serving at the highest levels either at EU or NATO institutions, is still quite low when compared to other counties in Central and Eastern Europe.

I am glad that in my case Mr. Petříček, the Minister of Foreign Affairs, was truly engaged and led the candidacy supporting process. Mr. Petříček has a good reputation at the College of Foreign Ministers. Next, there was synchronized lobbying from all our embassies as well as from the Ministry of Defence. I visited several capitals to present my vision of EDA, the Czech mission to the EU organized a breakfast for the ambassadors to the political and security committee. My advantage was that I have been active in the field for more than 15 years. I made many contacts also during my work at George C. Marshall Center think-tank. In fact, the current Slovak Minister of Defence, Jaroslav Naď, was one of my students there.

What is your final message for Czech and Slovak Leaders Magazine readers?

We have entered turbulent times full of disruptive challenges. Covid-19 has been so far the latest example. We should realize that this is the “new normal”. Under such circumstances, we should cultivate unity, solidarity, and resilience both within our respective nations and the framework of the European Union. We do not have a better ship to navigate us through the stormy weather and rough seas than the European Union.