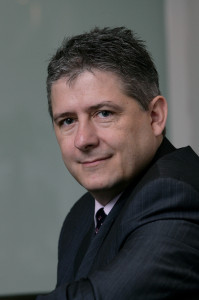 To non-ICT experts, the title might seem to be an oxymoron. However, the interview with Mr. Josef Švenda allowed me not only to address the trends in IT (for the experts rather ICT, stressing the combination of information and communication technologies) for the upcoming year but also improve the traditional dark image of the Czech Republic portrayed by the media as the country of cheap labour for assembly lines. On January 14, a unique press conference, synchronised across the region, took place, where Oracle announced the launch of a Europe, Middle East and Africa (EMEA) Recruitment drive to add 1400 new cloud sales professionals. In addition to Prague, new hires will be based in the five following locations: Amsterdam (the Netherlands), Cairo and Dubai (the Middle East), Dublin (Ireland) and Malaga (Spain). For the Czech Republic specifically, this will mean at least 100 new sales professionals who will help fuel growth in the Oracle’s cloud business. The press conference also marked the presence of Mr. Karel Kučera, General Director of CzechInvest, who was pleased with the growing trend in the Czech-US commercial exchange. From the point of view of a Czech citizen, it was interesting to hear that despite the fact that Oracle has not received any direct incentives for being based in Prague, it still sees Prague as an important regional location. The second reason was the fact that jobs for cloud sales experts will be followed by more expert positions of IT developers and so Prague managed to create new roles having a high added value on the market.

The remark from Mr. Švenda regarding the fantastic opportunity that Central Europe represents for both Oracle and for the cloud is not an understatement together with his belief that the cloud is perfect for supporting the rapid growth of agile and innovative businesses in the Czech Republic and Central Europe.

For me personally, this was a meeting with Mr. Švenda after a quarter of a century, which for him came as a surprise. During my high-school years, I was working as a hostess for the most prestigious IT exhibition called Computer Graphics and Mr. Švenda happened to be one of my first bosses, at that time leading Axiom company and presenting a revolutionary solution called Bernoulli box, a removable floppy disc. As you can imagine, from the IT perspective, it was the prehistory and after 25 years, I was pleased to reflect not only on the advance of the industry but also of the career of Mr. Švenda.

Mr. Švenda, we are meeting at the beginning of the New Year, so allow me to start with a personal question. What are your new year´s resolutions for the upcoming year?

Actually, I have none. For a long time I have been pursuing the way to concentrate not on big resolutions but rather on constant, day-to-day improvements. Every morning I try to find one particular issue that I can handle in a different and better way than I have so far.

And now back to the ICT sector. What are the main trends that you see relevant for the Czech and Slovak Republic for 2016?

I am glad that our countries continue to be undoubtedly a part of the Western world, so the trends in IT are the same ones as the ones in advanced countries. 2016 will be marked by the trend called Digital Disruption. Such phenomenon will influence almost every enterprise in every industry. The companies that are the most progressive are making their choices whether they wish to be “the disruptor” or they are preparing to be those to be “disrupted”. The power of Digital Disruption emerges as a culmination of five major trends that will reach its peak this year; these are: Big Data representing exponential growth of different data sources, Mobility in terms of digital data being able to be produced and consumed anytime anywhere, Social Networks as new means how to start a digital dialogue with customers, Internet of Things standing for data created by machines to be used by other machines and last but not least the Cloud as a flexible and elastic IT platform, enabling development and running of applications enabling the very phenomenon of Digital Disruption.

When you joined the company three years ago, you have compared Oracle to a roaring new red Ferrari. What does it feel like driving the Ferrari for three years?

It has been demanding as such a car does not allow for making mistakes. However, at the same time, you get to enjoy a lot of excitement.

As mentioned above, it looks like Prague is profiting from the Cloud. You have just mentioned new positions to be open with regards to cloud sales.

We are very glad that Prague has become a recipient of such an investment from Oracle. In order to offer so many jobs, Oracle has to invest quite significant resources into research and development of both products and services -these amount to 5 billion USD annually and also depend on the success on the customers‘ side. We are proud that Prague is perceived as a suitable location for high-tech centres such as ours. Our plans are ambitious and I believe that more than one hundred of new sales professionals will accelerate Oracle’s growth even further.

Few years ago, the experts were divided into two categories – those who supported cloud and those who were against. Now, cloud looks like a panacea. However, are there any other trends and solutions that leaders should be aware of?

I have already mentioned five significant trends (Big Data, Mobility, Internet of Things, Social Networks and Cloud); nevertheless, I would add one more and that is security which in reality runs through the main IT trends and to a large extent it can decide about existence or non-existence of companies in current digital era. Business leaders should pay a great deal of attention to security and choose partners that are well aware of the risks coming from digitalisation and are ready for them.

Another phenomenon worth mentioning is the interest of big IT companies to provide services for small and medium enterprises (SMEs). Thanks to the cloud solutions SMEs can afford modern systems that might significantly advance their performance. But doesn’t it resemble a situation when Goliath is giving his advice to David?

Perhaps, but it is worth noting that even Oracle started as David years ago and for many new companies it can be now an example and a source of good advice. I do not think that there are many companies who wish to stay small forever.

Let’s talk about investments in the public sector. When I did an interview with Jan Muehlfeit a few years ago, he admitted that investments in IT not always translated into the growth of performance. Has the situation changed?

ICT technologies have an enormous potential for the efficient running of public sector. But as it is the case with other investments, such potential might not be fulfilled for different reasons. I cannot say whether the situation in the public sector is improving, but I can clearly see the potential of ICT to improve lives of citizens and the entrepreneurial environment and we will definitely try to achieve that.

It looks like that you do not complain about the lack of students interested in technologies and given the number of acquisitions you do not mention that there is a lack of companies suitable for co-operation. Is it thanks to the industry of are you an optimist?

Or is it perhaps that our industry attracts life-optimists?

Mr. Švenda, can I ask you for the final words for Czech and Slovak Leaders?

Since we started on the new year’s theme, I would like to wish everyone plenty of success, both in their professional and private life in the upcoming year.

Are you the right candidate for Oracle? By the way, you do not need to have IT background but rather business drive and experience. And by the way, Oracle is also looking for talented women. Let me quote Loic Le Guisquet, President of Oracle.

“I want socially savvy, switched on individuals who can help customers respond to the digital imperative and make their businesses future proof. We are looking for people who want to be relevant to the biggest trends shaping business and technology.”