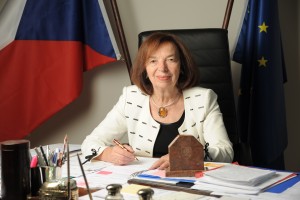 Her Excellency Livia Klausová does not often give interviews, so I felt proud and honoured to be able to carry out an interview for this very special first issue, dedicated to Czech and Slovak relations. Having worked at the Diplomatic Academy, I know that interviewing an ambassador is a challenging task. Most questions cannot be answered directly and to other questions answers have to be deliberately vague. Nevertheless, I was looking forward to sending my questions to Mrs. Ambassador. Besides political issues, I was interested in topics related to issues of leadership and diversity. If I am to mention some characteristics that come to my mind with regards to Mrs. Ambassador, I personally perceive her as an authentic, modest and hard-working woman. A woman that managed to be the First Lady, mother and grandmother, while still professionally active and on top of that she has always found the time for her charity work. All this in a very unpretentious manner without the need to have the attention of the media.

Mrs. Livia Klausová, born in Bratislava, studied at the University of Economics in Prague as well as in Luxembourg and Amsterdam. She had worked as a research expert of the Economic Institute of the Czechoslovak Academy of Science and later as an executive secretary of the Czech Economic Society. In 2003-2013 she was the First Lady, and since December 2013 she has been serving as the Ambassador of the Czech Republic to the Slovak Republic.

With regards to her charity activities, let me mention the Czech National Marrow Donors Registry, Life 90 Foundation and managing the Livia and Václav Klaus Foundation that mainly focuses on the support of education of many age groups, ranging from high school students to senior citizens, as well as assistance provided to children after they leave foster homes or children whose life has been impacted by serious car accidents.

Your Excellency, it is undoubtedly true that Czech-Slovak relations are very special in their nature. However, some people who still remember Czechoslovakia as a unitary state, might consider the relations as a glass being rather half-empty than half-full. How do you perceive this phenomenon from Bratislava?

Czech-Slovak relations are truly exceptional in their nature. And this is true not only about traditionally very close relations between the highest political representatives of both countries, those of governments, parliaments but the same is true when you consider relations between regions, towns, villages, institutions and universities. Relations within the realm of culture are also very intensive. In addition, we should not forget to mention family and friendly ties on the individual level between the two nations.

Slovakia will hold the Presidency of the Council of the European Union starting July 2016.  What are its main priorities and what kind of support it gets from the Czech Republic?

It is necessary to say that Slovakia has been very actively preparing for its historically first EU Presidency for a long time; the Presidency will start on July 1 2016 and last until the end of December 2016. As far as I know, the Slovak Republic is still working on its main political priorities. However, it is highly probable that these priorities will reflect the programme priorities of the so-called Presidency trios, that is three successive presidencies and the current trio is made up by the Netherlands, Slovakia and Malta. The programme of this Trio reflects three strategic priorities, including the issue of economic growth and employment, better protection of the EU citizens (for example in the social or health area), energy security, freedom and justice and last but not least the role of the Union as a strong global player. For sure, Slovakia will have to deal with the current migration crisis and will lead the Council of the EU during a very important period when many important and politically sensitive decisions will have to be made. And since you asked about the support from the Czech Republic, we naturally offer possible consultancy and exchange of experience from the times of Czech Presidency in the EU. However, the Presidency of the Council of the EU is first and foremost the responsibility of a given country that becomes for a half a year a “facilitator” of political and technical discussions and decision-making on various levels of the EU Council while being at the same responsible for communication with the other European Union Institutions. Presidency represents a big challenge and a big assessment. It is very specific in the manner that it forces the country to think more in the European terms and to a certain extent to leave behind national interests. I wish Slovakia handled its historically first EU Presidency in the best possible way.

I admit that I am not a fond of questions related to models. We can have certain models on the personal level, everyone has someone who played an important role in his or her life, was an inspiration or a good teacher and mentor. However, this cannot be replicated on the state level, since it would bring generalisation and simplification which lead to creating stereotypes. Moreover, it is not the role of the ambassador to judge or assess the hosting country. As far as the Czech Republic and Slovakia are concerned, one country passes over its experience to the other in the areas where it happens to be a step ahead and vice-versa.  Such mutuality only emphasises the special relations.

Can you compare the role of the First Lady and the Ambassador? To what extent do you have to play a certain role and to what extent can you be authentic?

Both First Lady and the Ambassador most of all represent a country. Both roles therefore come with a loss of privacy and a necessity to embrace many protocol rules. Both roles are similar in a sense that they entail not only many meetings with numerous people from different environments but also many administrative tasks. The main difference comes with the fact that the Ambassador is also responsible for managing the whole Embassy and a team of diplomatic and administrative staff. As far as “authenticity” is concerned in both roles, it is like in many other professions where an individual adds their own personal touch on top of a professional role.

You have become an ambassador, however you do not have the traditional support as expected from a spouse that plays a crucial role during many unofficial, yet supporting functions. Women have had traditionally low representation in diplomacy, which is also the regional trend in the Visegrad Four countries (Czech Republic, Slovakia, Poland and Hungary).  Does the low representation of women prove the fact that diplomacy is harder for women?

I see the often cited low representation of women in politics or diplomacy as a myth. I see a number of women in diplomacy and in local politics. However, the question why women do not enter the top politics is perhaps answered in your questions. It’s due to the fact that women lack support and a career conducive environment from their partners and husbands.

You were born in Slovakia, for a long time you have lived in the Czech Republic. Is there something that the Slovaks do not know about the Czechs and they should or vice versa, something the Czechs fail to appreciate when dealing with the Slovaks? Despite being close, we are still two different nations and I remember a case when one international corporation hired British experts on intercultural management to help with an efficient and effective Czech-Slovak merger.

My both parents came from Slovakia, my husband was born in Prague; I was born in Bratislava but most of my live we have lived in Czechoslovakia. Perhaps this is the reason that we do not perceive any possible differences so strongly. The Czechs and Slovaks are close to one another also due to history and yet we still have differences but very subtle. In order to understand each other we certainly do not need experts from Great Britain.

You have spent your professional life following economy. Do you still manage to keep up with the latest economic trends?

The main task of an ambassador is not only following political events, but also paying great attention to economic issues. This is even more important in the case of Slovakia, being the second most important trade partner. Economic ties are very strong in numerous spheres. Moreover, economic diplomacy represents one of the priorities of the foreign policy of the Czech Republic. In that sense, my economic studies are an advantage.

Your Livia and Václav Klaus Foundation has an education as a common denominator. The Czech educational system is very often criticised. In which areas do you see the biggest room for improvement and which areas are you satisfied with?

Livia and Václav Klaus Foundation specialises on education. It is not meant to criticise the Czech education system but to support hundreds of students during their high-school and university studies through scholarships, and primary schools children in their after school activities. We also support senior citizens, within the framework of the project “Seniors communicating” we teach the knowledge of using the latest communication devices. In terms of the Czech education system, we can criticise our vocational schools not having enough students and on the other hand too many university students studying subjects of little relevance to the job market. However, I still believe that our education system is a very good one.

Family has traditionally played an important role for you. Where and how do you get energy nowadays?

Family is naturally very important for me. I get energy from my closest relatives, friends and from many people whom I meet.

What are your last words to Czech and Slovak Leaders magazine readers?

The very fact that the Czech and Slovak Leaders magazine is now being published also in Slovakia reflects the Czechs and Slovaks being close to each other and our unique relationship. I wish all those who put together the magazine that it continues to be inspiring in both countries and that its interesting stories capture attention of all generations of your readers.

Your Excellency, thank you for your interview.