Nothing replaces a doctor’s EXPERIENCE and INTUITION 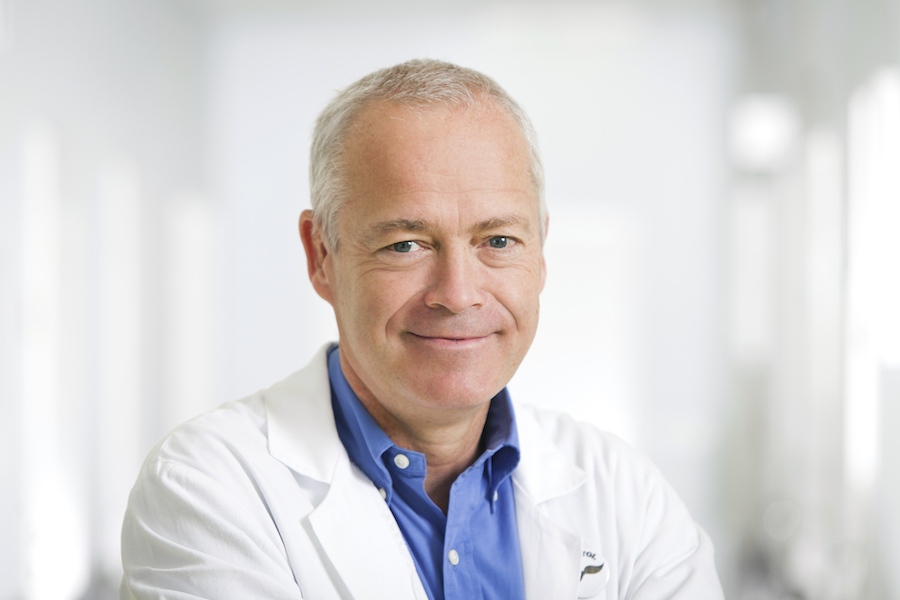 Professor Marek Babjuk, Head of the Department of Urology at Motol University Hospital

Professor Marek Babjuk is the Head of the Department of Urology at Motol University Hospital, Chairman of the Czech Medical Association of J. E. Purkyně’s Czech Urological Society, and senior doctor at the Uroklinikum clinic. He specialises in treating cancers. He has undertaken numerous placements abroad at prestigious workplaces in Germany and the USA. Our interview covered the topics of bladder cancer, smoking, prevention, modern surgery, and also gender reassignment.

Our hospital is the largest in the Czech Republic, and it is also a university hospital. In practice, this means that as well as providing care to our patients, we are involved in teaching students of medicine and teaching doctors undertaking specialist training (i.e. prior to certification), and we are also expected to undertake research. Sometimes it is very difficult to bring it all together and meet all expectations.
One huge advantage is that our hospital is one of the most modern and best equipped in the country. Our clinic has modern rebuilt operating theatres equipped with cutting edge technologies, including equipment for robotic surgery. Our equipment is comparable to that in leading clinics abroad, and we endeavour to ensure our outcomes are reflective of this. It would seem, at least according to the statistics, that we are succeeding. This naturally means we have a great responsibility, with a large number of patients coming to us, and with the current method of payment and our personnel situation, especially in terms of paramedical staff, it can sometimes be difficult to please everyone. But we do our utmost.

You specialise in bladder cancers. How are Czechs doing in the statistics?

Malignant tumours of the bladder are very frequent, the sixth most common cancer amongst Czech men, and just below tenth most common amongst women. Over the past 30 years, the incidence of the disease has doubled. In 1990, 1300 new cases were discovered, while in 2015 the figure was 2158 cases. It would appear, however, that in the last few years this upward trend has stopped. Another positive fact is that despite the high incidence, deaths are stagnating, something which is also a reflection of the high quality of care provided in our country.

Smoking is said to be the main cause of bladder cancers. Are Czech patients aware of this and disciplined? Are there any new statistics available in light of the growing popularity of e-cigarettes?

Smokers are a high-risk group. Smoking cigarettes increases the risk of bladder cancer by up to six times, and there is also a higher risk of more aggressive forms of the disease. And we mustn’t forget that breathing in tobacco smoke when you live with a smoker at home or at work for many years is also dangerous. Bladder cancers are the second most common cancer connected to smoking after lung cancers. It is a pity that the public are not often informed about bladder cancer or its connection to smoking. An educational campaign would be of great use for all of us – even for a smoker who quits, the risk of getting the disease falls after 1-4 years by up to 40%. E-cigarettes likely reduce only some of the risks connected to smoking. As I have said, the upward trend of incidences has stopped in recent years, and this may be due to the falling number of smokers, or other factors may also be involved, including a healthier environment.

The lay public is to some extent aware of the issue of stomas due to their use by some well-known personalities. What are the options for replacing the bladder?

There are currently a number of ways of dealing with urine expulsion after bladder removal, such as following cancer. Besides fitting a stoma, a new bladder can be created from part of your small bowel, which we connect to the urethra. One should be aware, however, that although it might appear that the patient can pee as before, they actually have to learn how to “handle” the new bladder – notice how full it is, practice draining it, etc., and this can take a number of weeks or months and is actually quite difficult. This method isn’t applicable to all patients, of course, and can be limited by the size of the tumour, or the function of the kidneys or overall condition of the patient and their willingness to co-operate.

The use of non-invasive and endoscopic treatments is ever more common in medicine. It may be rather bold of me to ask how much longer people are going to be doing surgery, and when will robots begin operating on us?

I’m not sure whether a robot can entirely replace a doctor. Even surgical robots, much- discussed today, are not really robots in the true sense, but rather a kind of remote manipulator. Movements of the doctor’s hands are relayed to a fine instrument placed inside the patient’s body through a number of small incisions. The result is less invasive and also more precise, and furthermore some negative “human factors” such as hand tremors are also eliminated. In addition, the digital image transmitted to the surgeon by the camera introduced into the patient’s body allows for perfect image sharpness, and various modifications can be applied to improve the visibility of certain structures or tumour lesions. I think things will develop further in this direction, with some sub-steps likely to be automated, but the role of the doctor using his intuition and experience cannot be entirely replaced.
However, doctors’ preparation for doing surgery will change. Experience will be acquired from simulators including digital simulators able to faithfully simulate specific surgeries, including particular situations which may occur during such surgeries. Thus doctors won’t learn directly on patients, just as pilots don’t learn to fly in a real plane with passengers.

In the context of the generational renewal of doctors, a trend has been noted that female graduates of medicine now predominate over men. While gynaecology has been a common specialisation for male doctors, it seems to me that urology has long been perceived as a male field. Do you perceive this generational gender problem?

It is true that there have been more women in urology recently, and they are even the majority of younger juniors. One reason for this is that urology is not a purely surgical field (diagnostics and outpatient care also play a certain role), and urological operations are precise and delicate, not normally requiring brute force. I don’t think women joining the field is negative – they bring new perspectives and approaches. Naturally, women have a different life cycle to men, but this need not mean any limitation to their professional career. Employers and the state should adapt and create the right conditions for nurturing the professional careers of all who wish to advance – I think this will be more beneficial to society than any one-off financial contributions.

The series Most!, in which the main character has undergone a sex change from a man into a woman enjoyed great popularity amongst viewers. Real life is often different from television… What eludes the general population in regard to gender reassignment surgery?

Most! portrayed everything in a rather humorous and exaggerated light, which I think is good – we really needn’t take life seriously in all of its aspects. For transsexuals, of course, we often see positive life stories and very good cosmetic outcomes following a sex change. However, the public does not see a number of hidden problems – the necessity of long-term hormonal treatment, the difficulty and risk of the surgery, and the complexity of a problem which doesn’t relate merely to outward appearance, but also to personality and how others perceive it.

A final word for Czech and Slovak Leaders readers?

You shouldn’t underestimate symptoms suggesting something isn’t right with your body. For urological diseases, these mainly involve blood in urine, or difficulties emptying the bladder. Visiting a urologist today doesn’t involve painful examinations, so it is not something you need be fearful of.

This interview is also available in Czech. Just click here.