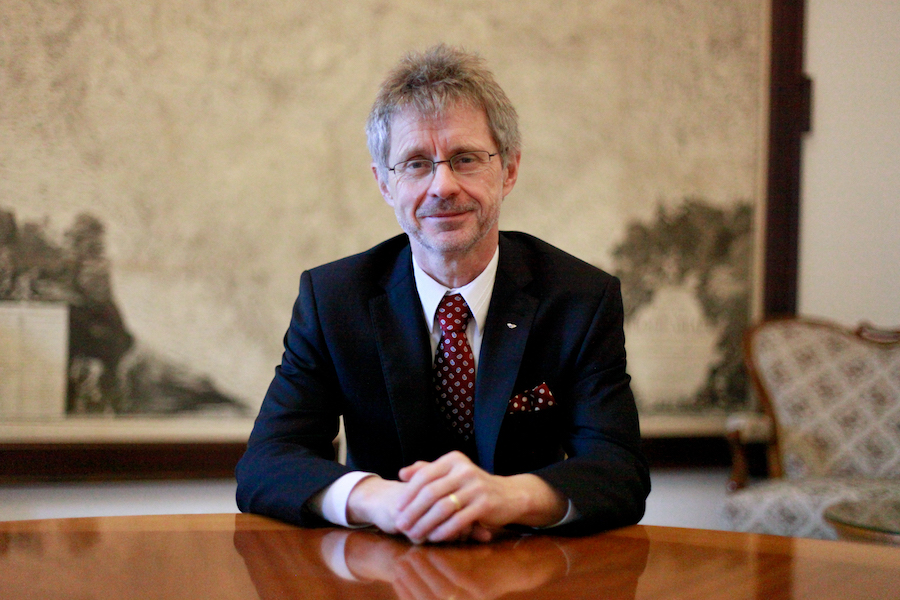 RNDr. Miloš Vystrčil was elected to head the Senate following the unexpected death of the renowned and high-profile figure of Jaroslav Kubera. He is heading the Senate until the autumn elections.

He describes the Senate as the freest and most democratic institution he has experienced. It is the institution which is the least manipulable and hardest to manipulate. And it is an institution in which the vast majority of senators always put the benefits and future of the country first.

Despite his experience, he remains very modest. His inaugural speech included a humble proclamation that even should he be elected to head the Senate, giving him the role of the second-highest-ranking official in the country, he would still remain one of 81 senators, and that should he ever forget this then his colleagues should remind him.

My interview with Miloš wasn’t just about his vision of leading the Senate and the political issues he has been long-focused on. We also looked at protocols and ceremonial affairs. Despite a heavy workload, the President of the Senate can serve as an example in how to manage a challenging job while still actively taking part in sport. And finally, our readers can look back on the recent 170th anniversary of the birth of Tomáš Garrigue Masaryk. 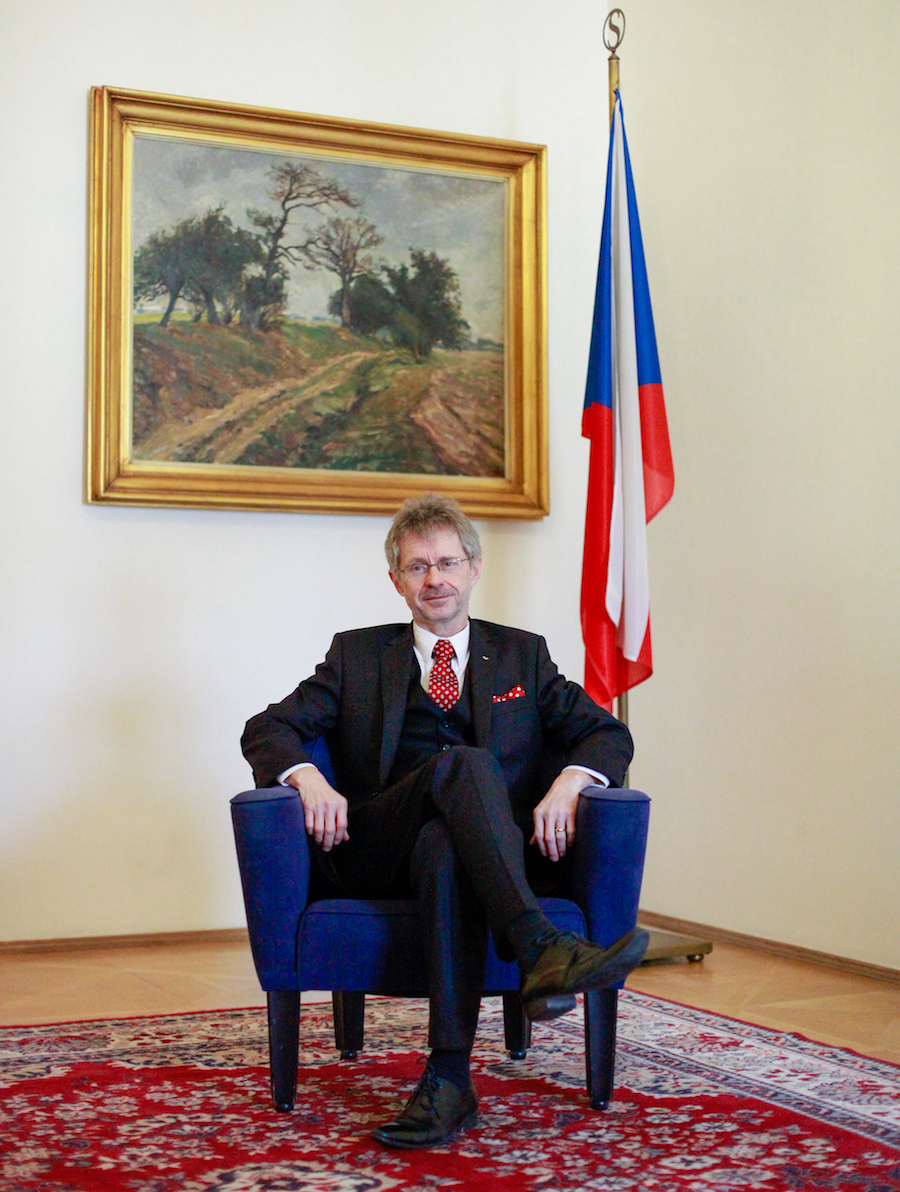 Mr Senate President, thank you so much for your time and willingness to grant an interview to Czech and Slovak Leaders readers. Let’s begin with your vision for leading the Senate. You’ve got a relatively brief eight-month period left in the role. On the other hand, you’re taking over the role of the second highest-ranking official from Jaroslav Kubera, who was not just a distinctive, but also a very active, political figure.

You can’t make any fundamental changes to how the Senate operates in eight months, and we don’t need to do so anyway. The Senate is carrying out its role and operates very well in terms of approving laws, assessing their quality and organising other events which take place in the Senate. I am personally focusing on three areas in which we can make progress during this short period of time. The first is to increase the Senate’s visibility and explain its role to the public. Here, however, I am building on the work of my predecessors, Milan Štěch and Jaroslav Kubera, whom you have mentioned. I think it is important to go out into the regions and hold discussions with the public, and not just in connection with major events. Last weekend, when we marked the 170th anniversary of Tomáš Garrigue Masaryk’s birth, I visited not just Lány but also TGM’s birthplace, Hodonín. I talked with citizens not just about the president as liberator, but also about the meaning and importance of the Senate. The second point on my agenda is to establish close communication with the Chamber of Deputies, especially in terms of information exchange. I am convinced that if the Chamber of Deputies could share their draft laws or intentions in a different form to the current so-called excerpts, then this could make the legislative process significantly faster and improve quality. My third point is to organise a number of public hearings on core issues which affect the Czech Republic. I’d like to discuss issues such as the ageing population and the related topic of pension reform. I’m from Vysočina, so I’m also very much aware of the issue of forest dieback. Vice-President of the Senate, Miluše Horská, and I are also planning a discussion on human rights. These public hearings are essentially a different form of Senate session, and they serve to stimulate debate and help resolve crucial issues.

What has surprised you in exercising your role? In a positive and negative sense?

In terms of the nature of the work, there was no surprise there. What I do feel is a certain satisfaction in regard to a perception of an active approach to the role and its utilisation for the daily operation of our institution. Many have told me that the role of Senate President is mainly a symbolic and ceremonial one, taking part in various events and awards, and welcoming important figures. This leaves no space to influence laws, the operation of the Senate and the Czech Republic in general. But my experience so far is the opposite, and very positive. I’ve seen that if the Senate President communicates well with the other Vice-Presidents and caucus chairpeople, then it can affect the Czech Republic’s position on crucial issues in a significant way. If there were no Senate, some issues would not be dealt with at all. The behaviour of the Chinese ambassador, an example of a crucial issue which is of interest to the general public today, shows that protection of the Czech Republic’s sovereignty is one of the Senate’s roles, and it fulfils this role much better than any other institution.

And have you had any surprises of an unpleasant nature?

I don’t know whether to call it an unpleasant surprise exactly, but I have had to deal with loss of freedom. I’ve been assigned protection officers and I have to report my movements to them. Some might be jealous of this fact, but they don’t realise what it’s like to live, knowing that you mustn’t forget to inform them even when you’re taking the dog for a walk with your wife.

By virtue of your office, you hold one of the seven keys to the Crown Jewels Chamber in the Chapel of St Wenceslas. How does that feel?

Let’s now look at issues linked to your membership of the Committee on Public Administration, Regional Development and the Environment. In recent years, the Czech Republic has been mainly focused on the prevalent drought, with a number of conferences being held, including ones abroad, where this issue has been discussed with representatives from Israel. You’ve already mentioned forest dieback. What do we need to do from your perspective?

Forest dieback is very closely related to the drought. When there isn’t enough water, trees are much more prone to various diseases and find it more difficult to combat bark beetles, something which has heavily impacted Vysočina specifically. In terms of securing water within the landscape, we just need to go back to the proven methods of our ancestors. Instead of vast fields, let us return to hedgerows, wetlands, and rivers and streams with meanders instead of regulated straightened courses. Unfortunately, the situation is not helped by the inconsistent measures taken by different state institutions. While the Ministry of the Environment provides grants for re-meandering rivers, the Ministry of Agriculture offers grants for the regulation and de facto concrete lining of river beds. An absurd paradox. If we’re not able to grasp the crucial nature of respecting the natural world, then any inspiration from the surrounding world is of little use. The basic way we act is up to us. We know what we have to do, but we don’t do it because we think we can beat nature. 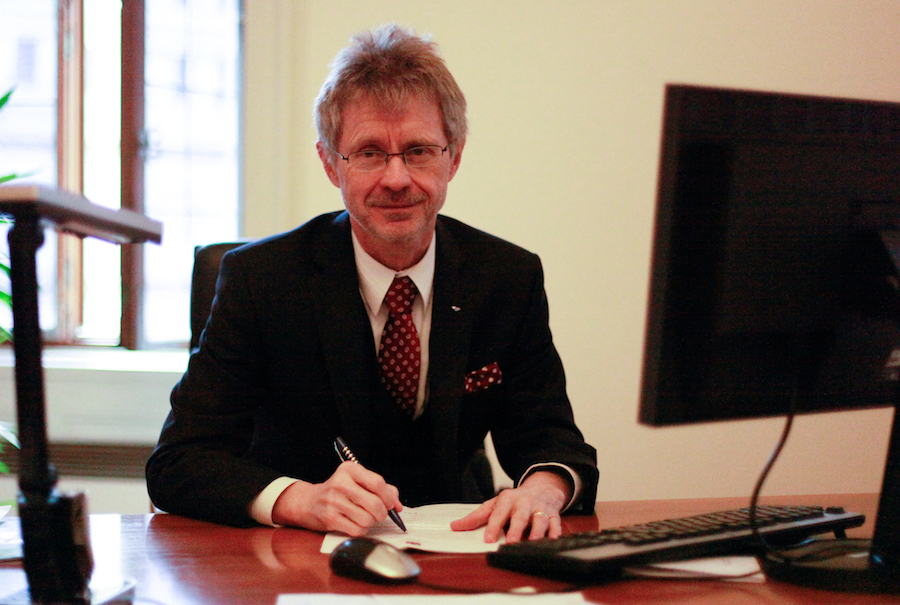 Do you miss the school system? Your original profession is teaching, from which follows your engagement in social issues. How do you perceive Czech society in terms of the school system, social divisions and intergenerational solidarity? Czech schools have long been accused of not being able to develop talent and help children achieve a higher education than their parents achieved.

I miss the school system. Sometimes my original profession manifests itself when I teach my colleagues; I have a tendency to test them and grade them. But I haven’t received any report cards in my Senate office yet, and I’m not planning to give out end-of- term reports (laughs). In terms of the school system, you’re right. My opinion is quite a distinctive one. I think we need to trust teachers and not force all teachers to teach in the same way. A strapping young male teacher will build authority in a different way to a smaller-statured, middle-aged female teacher. Teachers usually manage the situation well. What we can do is secure them better remuneration and provide them with enough space to carry out their profession. In terms of remuneration, the situation is improving. In terms of trust and respect, it is not improving. Many people who have no experience of teaching others still think they can advise teachers. We lay people don’t advise brick-layers on the best way to build a wall, and we don’t tell carpenters how to make tables. I’m an advocate for expanding the powers of both school principals and individual teachers. With this power comes responsibility. I can imagine that after completing their final 9th year at elementary school, pupils might do some kind of leaving examinations in maths, Czech and a foreign language. They might be anonymous for the pupils, but the aggregated scores would provide information on the level of the particular school.

In terms of social issues, I am a great proponent of an approach based on intergenerational solidarity. I myself am involved in the charity Sdílení, which provides home hospice care, respite care, various medical aids, and also provides training to medics. If this type of organisation could operate at the level of municipalities with extended competence, then this would be the most effective way of providing social services. When people know each other, there is no danger that anyone might not provide a quality service to another, would dare to steal from them, or would even be negligent in care provision.

How do you manage to relax? You’re a football fan. When were you last at a match, and when do you play football yourself?

I go to see the football in Telč regularly; we play in the 1A league, but it’s the winter break right now. I consider myself a bit of a coach on the sidelines; the mayor and I are both former players, so we drink beer and advise the young players. We really enjoy it. I no longer play football actively; you’re always dependent on the group and when the others are available, and I’m often working at different places. Instead, I go running. I run alone and can clear my head doing so. I’m looking forward to the Victory Run on 8 May, and I regularly run the Jihlava half-marathon. I need to start training at the end of March; I’ve already informed my security. So they can get ready too.

Your final message for Czech and Slovak Leaders readers?

We recently marked the 170th anniversary of Tomáš Garrigue Masaryk’s birth. I’m using words originally spoken by Mark Twain, but Masaryk liked to quote him. “If you ever need a helping hand, it is at the end of your arm.” I think this quote applies to all the situations we find ourselves in today. From the situation around COVID-19 to the debate on securing your old age, it all begins with personal responsibility towards yourself and your children. Those hands at the end of our arms can be the first to give us help when those around us, or the state, fail.