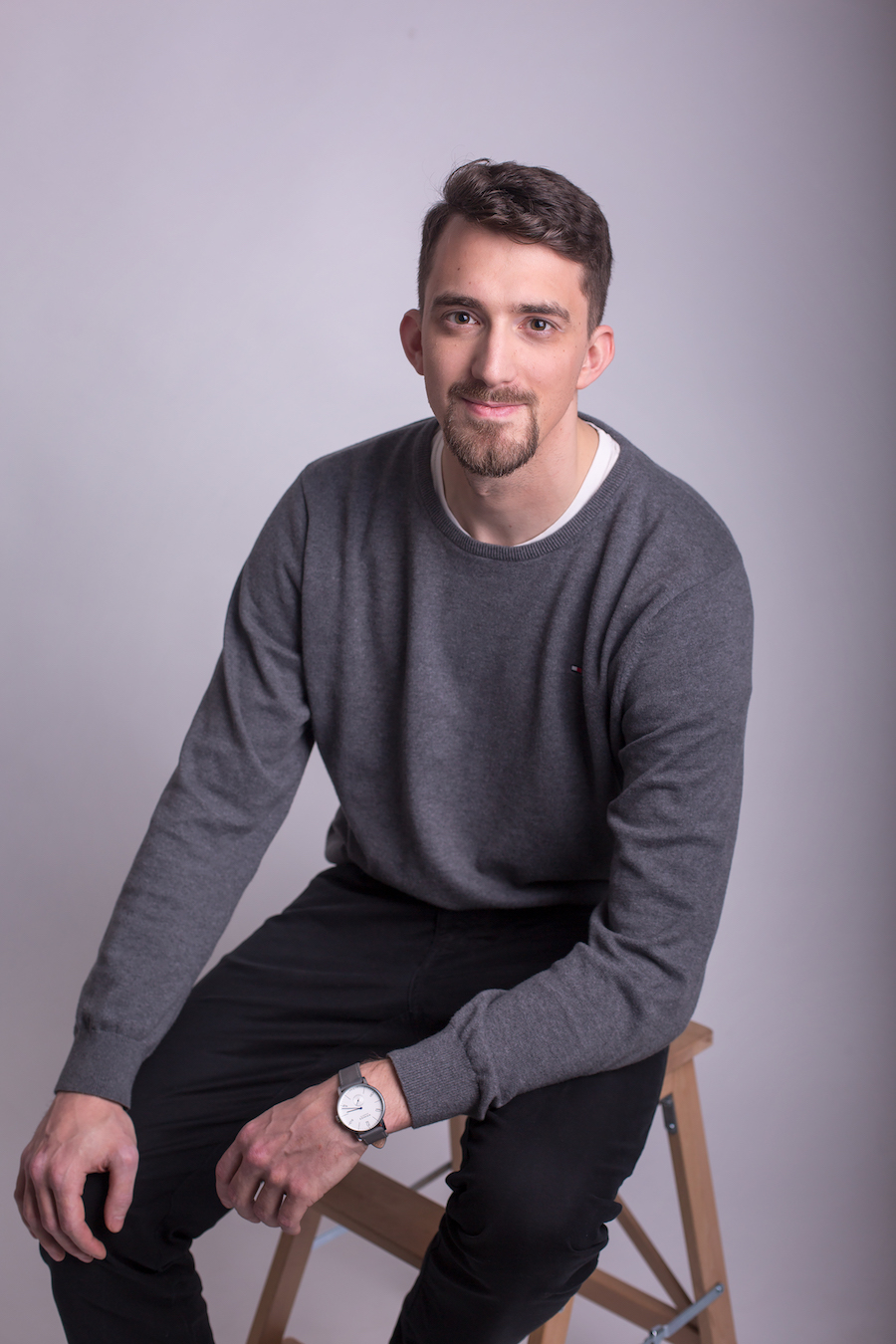 In October 2018, the Czech company Nafigate Cosmetics launched a new cosmetic product that does not use microplastics. This product has secured world primacy for Czechs in access to cosmetics. The new peeling shower milk with the natural polymer P3HB is based on a unique development by Czech scientists. There is a picture of a sea turtle on the product packaging, reminding the consumer of the serious problem of microplastics in water. As we deal with innovations in business regularly in Czech Leaders, I happily accepted the invitation to lunch from Ondřej Mynář, CEO of Nafigate Cosmetics. A work lunch has never passed so quickly. I admired how young and successful Ondřej is, while remaining modest and humble in spite of his success. He started as a summer worker in the company, slowly working his way up to the CEO chair and fully taking over the management from his mother, Lenka Mynářová. Ondřej Mynář faces the future with optimism. He has travelled nearly the whole world, but decided to continue doing business in the Czech Republic. He speaks of Czech scientists with enthusiasm, as he does of his dreams. Personally, I am glad that this special issue dedicated to the 100th anniversary of Czechoslovakia can feature him, a representative of the new young generation of leaders who are picking up the industrial tradition of the First Republic while having global experience and ambitions.

Ondřej, what was the path from academic research into nanofibres to a cosmetic product that is unique in the world?

The research started in Nafigate Corporation and focused on development of nanofibre applications for water and air filtering and on the application of nanofibres in biotechnologies. As part of its activities, Nafigate Corporation worked on developing nanofibres designed for skin use. Examining the transfer of active substances using nanofibres was one part of the medical research that appeared very promising. It showed that nanofibres can in fact actively bind pus from acne, for example. Eventually, a team of about 15 scientists decided to make a bold innovative leap: shift the research into cosmetics. Medical research is both money- and time-consuming in terms of approval and regulatory procedures, and it takes decades; we have to be able to respond within weeks. And it was based on this nanofibre research for cosmetics that Nafigate Cosmetics was established in 2015.

The story of Nafigate Corporation and Nafigate Cosmetics can be used as an example of combining primary and applied research. At the start, however, your key product failed rather than succeeded, which goes to confirm the well-known fact that initial failure is common in start-ups and means nothing.

Research into nanofibres and their effectiveness was indeed the foundation for Nafigate Cosmetics. Nafigate Cosmetics started as a spin-off project with the product AcneInvisible. Building a company on a single product was in itself not the best idea. AcneInvisible didn’t do well as a product. It cost us a lot of money and energy, but on the other hand we learnt a lot from it. We removed the product as such from the market after a year and a half, because it fell short of our high expectations. During the product modifications, however, we confirmed the effectiveness of nanofibres in cosmetics, customers began asking for more products, and eventually they demanded a whole product range. So we gradually developed Nano-Eye Lift, used for immediate wrinkle reduction.
A study verified by the National Institute of Public Health proves a reduction in wrinkles of up to 75% after a 30-minute application. At the same time, the nanofibres open up pores, enabling penetration of more active substances into the skin. Gradually, we’ve marketed creams, serums and other products, as is common with other cosmetics companies. The total number of our products has grown to 36 in three years. We have not only thousands of customers but also more than 350 partner parlours, where customers can test out our entire product range. We thus offer not only products focused on wrinkle reduction and hydration, but also a cream with active substances containing hyaluronic acid. We continue to market not only new products in the form of cosmetics but also technological innovations that make our products unique.

Your career story somehow reminds me of the American dream. You joined Nafigate Corporation as a summer worker and then you worked your way up to marketing manager and marketing director. At Nafigate Cosmetics, you’re the company co- owner, chairman of the board of directors and you manage the whole company.

Yes, I started by preparing documents and presentations. Communication in Nafigate Corporation ran at a scientific level, proceeded at professional trade fairs and focused on development. After establishing the cosmetics company, I was the only one with the basics of communication marketing, and I was able to communicate over social media and adjust communication to the end customer. Suddenly I started dealing with very different issues relating to legislation and base products. After three years, I can say in all conscience that we have everything working smoothly and the team’s well on its way! We employ 15 people and our turnover target for this year is over 8 million.

Let’s now look at your brand new product, which you launched in October and is unique in the world of cosmetics.

It’s a shower gel based on a biopolymer that’s never been used in cosmetics so far. This means our product doesn’t contain microplastics, which are microparticles that enter water and severely contribute to upsetting of the ecosystem, because microplastics take centuries to break down in the environment. The Hydal technology again originates from Nafigate Corporation. By the way, the Hydal technology won first place in this year’s competition Innovations for Sustainable Development. It’s a new technology, the only one in the world that can process industrially and reuse spent deep-frying oil and turn it into a brand new, high-value raw material, a PHB-type biopolymer. It’s used either as a raw material for bioplastic production, or as a naturally decomposing microplastic. Nafigate Cosmetics has been successful in grasping the ideas of excellent Czech scientists and linking them to the end market. I’m glad to bring to the market innovations coming from Czech scientists, who can do world-class science at a fraction of the cost. That said, the transfer of innovations from laboratories to the end market is very complicated.

It looks like you’ve found the Holy Grail of linking primary and applied research. Even big corporations have a hard time finding an answer to that. For you, it’s the customer who’s at the fore, not science as such.

There’s an underlying united effort of all those involved. We all strive for the best product for the customer. We face numerous challenges, legislation being the first one. If you’re a pioneer in something, for example in using biopolymers in cosmetics, you have to design special testing, because no-one’s ever done this procedure before you. The readiness of the whole team for action is shown when the first non-standard procedure comes. I’m really proud of the composition of the teams in both companies, Nafigate Corporation and Nafigate Cosmetics. Nafigate Corporation pays great attention to talent management; resolving the problem of not using microparticles involved an array of absolutely brilliant postgraduates, supported by more experienced corporate employees. The other team, at Nafigate Cosmetics, then literally dived into resolving the legislative issues connected with marketing the product. The point is that the customer demands all the standard properties in a product; innovation is secondary only to that. To give an example: when you use a shower gel, you have to get a pleasant feeling from using it, a gentle touch, foaming ability, and so on; the innovation really comes second in this case. The product’s properties have to be identical, to which we add a second value, namely an environmental approach, since the product is fully degradable in water. We have one stage in the product development cycle that not many companies have. None of our products will reach the market until we have favourable comments from customers. We use a network of cosmetics parlours for this, in which we regularly test our products. We pay great attention to feedback from our customers, and adjust our formulations based on it. Frequently we do this repeatedly. On the other hand, we’re very fast and capable of responding within weeks or several months. Sometimes we don’t market the product at all, because we know we wouldn’t be able to keep our promises and corporate values. We make our products without parabens, and if we use perfumes, then only natural ones.

Another frequently debated issue is successorship. You took over from your mother, but originally she wanted you to do sociological research. What’s it like working with your mum?

You know, sometimes it’s hard to have your mum at work. On the other hand, I realise many of my achievements are only thanks to her. She allowed me to travel, organise trade fairs in China, and try dealing with important business partners. As for business, each of us is different. I’d describe my mother as an energy hurricane. She handed the company over to me completely, as I don’t think having multiple leaders is viable. I was well prepared for successorship; I’d worked hard for it. All the employees knew me, as I’d hired some of them myself. The fact that I’d helped build the company and had an expert understanding of the issues helped me a lot. I often see cases where someone from the outside arrives to manage a company. Personally I don’t think it’s appropriate; you have to know the company from the inside. It’s also easier to gain people’s confidence if they’ve known you as a hard-working person with a vision for moving the company forward.

What is your vision?

To build a world-renowned cosmetics brand based on technological innovations. To use the magnificent potential of Czech scientists in the Czech Republic, which is a great country for doing business. I’ve travelled all over the Czech Republic. At present, we have facilities or collaborating institutions in Ostrava, Hradec Králové, Liberec and Prague. What we are lacking is better PR, and I’m glad to be able to contribute with my vision for a company that has the potential to change the world.

(This interview is a loose continuation of the series on innovations. We recommend the previous interviews about nanotechnologies with Jiří Kůs and about circular economy with Soňa Jonášová. The interviews are available on- line at www.czechleaders.cz/interviews)