“I don’t think you can pick some common “national” specifics of our managers.” 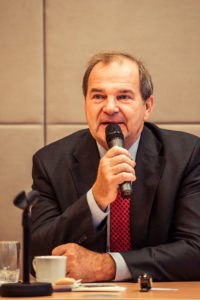 On 22nd April you selected the best Manager of the Year. The basic criteria for the MANAGER OF THE YEAR competition have been in place for a long time. However, have there been any improvements over the time, and have you brought some innovation to this year?

This year we’ve had no new terms. The main contribution is considered a contribution of a manager to the results of the companies or organisations managed by them. Of course, as the overall situation changes, our Evaluation Commission and the National Commission (we have a two-tier model assessment) judge certain aspects sensitively. Nowadays, I myself place increased emphasis on the issues of a sustainable development and stability. Obviously, this area includes in particular the topics of innovation, equity and cooperative research, long-term environmental impacts, etc.

What added value goes to the winning the award?

I think the biggest advantage is feedback which each contestant of the competition receives. But that is logical, since a basic skills of each manager must be the ability to navigate in an increasingly tougher competitive environment. Therefore, every benchmark (comparison) is good. Undoubtedly, it is also beneficial to get into the society of the best, not only in terms of competition but also within the context of the “Club of Managers of the Year”.

Last year you revived a programme of conferences about the impact of female managers on the company. You’ve chosen the same topic for this year. Why?

Yes, we decided to repeat the last year’s theme through a specialised conference which traditionally precedes the ceremonial announcement of the winners of the MANAGER OF THE YEAR competition. The reasons for selecting a gender topic were a few: firstly we evaluated the last year’s conference as successful, secondly the situation regarding the status of women in the workforce (different salaries for the same work) and their involvement in the management of the economy has not improved, and we also plan to present more experience from abroad. That’s why we invited the Deputy Secretary-General of the UN – Ms. Lakshmi Puri, who has this topic on his agenda; in addition, we invited the former President of the European Management Association Ms Annika Ellias and last but not least “our” EU Commissioner Mrs. Vera Jourová.

This year’s survey of yours among the finalists of MANAGER OF THE YEAR competition shows that they have a great deal of difficulty caused by administrative burdens and bureaucratic obstacles the number of which is still growing.

The answer is quite simple – the new additional burden that is not balanced by adequate bureaucratic relief is a VAT issue and also short deadlines for resolving any potential discrepancies. More than half of the respondents agreed on this. Of course, there are other topics – construction law, unrelenting explosion of legislative news (for the last decade, the number of words in our legislation almost doubled?? !!).

As the other system problem, the respondents see weaknesses of the Building Act, slow computerisation of public administration, high costs connected with implementation of new legislation etc. Do you cooperate with other competition partners – the Confedereration of Industry of the Czech Republic and the Confederation of Employers‘ and Entrepreneurs‘ Associations of the Czech Republic – on tackling this problem? Do you negotiate with representantives of the state about the improvement of conditions for businesses? Do you already have any results?

With our partners – “The Confederation of Industry of the Czech Republic” and “The Confederation of Employers’ and Entrepreneurs’ Associations of the Czech Republic”, we seek to redress the unfavorable condition that is significantly negatively contribute to the international competitiveness of the Czech economy. Unfortunately, the results are not satisfactory. The main reason I see in a situation – there is a problem, but instead of assessment by the aims and purposes of law or regulation, things begins to juggle with individual words or phrases. Persistent effort to affect legislation in each situation only leads to complexity and confusion and can never have a chance for success.

The Czech economy grew strongly last year. How do Czech managers react to this? Did we produce, sell, provide more services? Or was it, particularly in industry, more about the game of numbers given by external factors?

The last year’s boom in the Czech Republic was supported by an increased demand from abroad – partly thanks to a decent local boom and also due to more attractive and improved competitiveness of our exports caused by the exchange rate commitment of the Czech National Bank. Another positive influence was increasing the internal aggregate demand, mainly thanks to European subsidies.

What are this year’s expectations of CEOs? Will they also increase their investment and hire new people?

Some of the influences above will positively affect 2016, but there will not be the same scope of last year’s European subsidies, and we can’t expect an unusually low price of oil. Due to these factors, I estimate a loss of 1-2% of GDP growth.

New technologies affect the fulfillment of people and their careers in the work process, form the deployment and utilisation of their potential. Do today’s Czech managers promote themselves more abroad than in the past, or in domestic companies, where it was common to only have foreign leadership?

For some time now, we say that our best managers – for example the finalists of the MANAGER OF THE YEAR competition – fully withstand comparison with managers in advanced countries. Therefore, more and more of them are successful abroad, especially the younger ones who have grown up in the new conditions of free movement, education and information.

I don’t think you can pick some common “national” specifics of our managers. It’s always an individual matter, although those with the success have skills such as flexibility and ability to adapt to work in other cultures – in other words, they have strong social skills.

Ing. Pavel Kafka dr.h.c., has been President of the Czech Management Association since March 2011. He graduated from the University of Economics, majoring in foreign trade. In 1994-2009 he was Managing Director of Siemens Czech Republic. In 2005 he became the absolute winner of the MANAGER OF THE YEAR competition. This year he was also awarded the honorary degree, Doctor Honoris Causa, from the University of Economics in Prague for his important practical contribution to the development of management.

CZECH MANAGEMENT ASSOCIATION (CMA) is a voluntary association of independent executives – managers. It was founded in 1990 and its mission is to work on developing the professional skills of managers and their ability to lead working teams. Its mission is to contribute to improving business performance, competitiveness, ethics, management, culture of relationships and a responsible attitude of managers towards customers and the society.

Competition MANAGER OF THE YEAR was founded in 1993 and has become a traditional event to assess leaders in management in the Czech Republic. It showcases modern management methods, developments and trends. It also recognises great managers, presenting their achievements to the wide public and highlighting their role in the development of both Czech economy and society. It has been gradually extended to other areas, such as culture, sport and public administration. The finalists were announced on 12 April 2016 and the awarding ceremony was held on 21 April 2016.