“Live, play sports and eat sensibly, so you have no need of an orthopaedic surgeon” 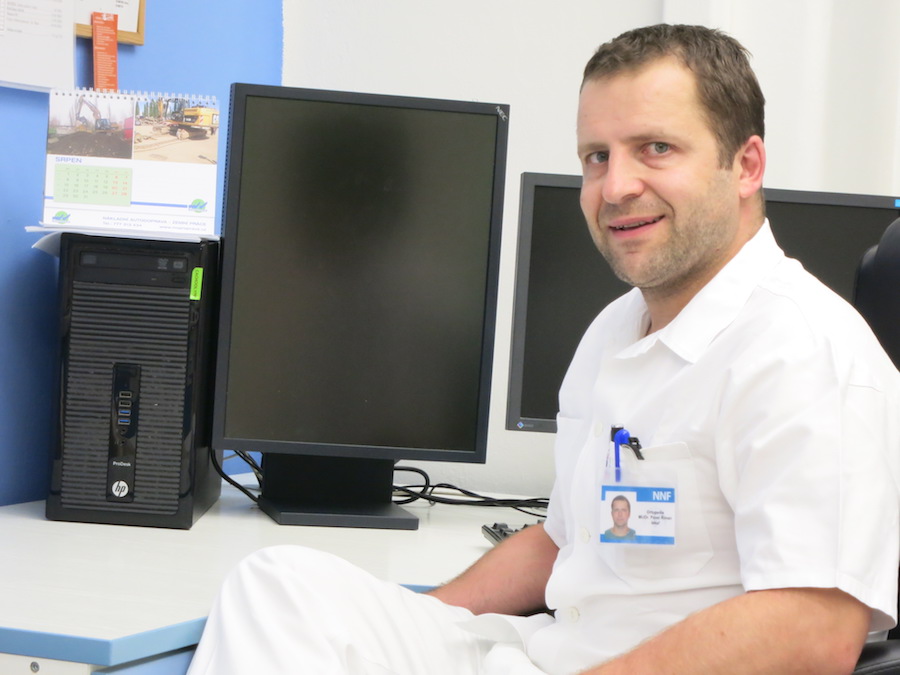 MUDr. Pavel Říman is an orthopaedic surgeon at the Na Františku Hospital in Prague. Elsewhere, he has been the doctor to the men’s international basketball team since 2008, having travelled to the World Championships in China in 2019. He has also been taking care of players from the ZVZZ USK Prague women’s basketball team since 2015. Czech judoists are also under his watch, including Lukáš Krpálek and his knee, which the doctor operated on.

MUDr. Pavel Říman studied in Prague and also spent a semester on a study placement in Trondheim, Norway. He studied other specialisations in Germany, the USA, and Great Britain.

His considerable workload meant that our interview could not be done face-to-face. Which is more demanding for a doctor – the summer sports season or the winter? How should we look after ourselves to avoid joint replacements? What is the main difference between the Czech, Norwegian, and American health systems? And how does he see the situation currently surrounding female Czech medical students?

I recommend the interview to sports persons and non-sports persons alike. Each and every author would like what he or she writes to have an impact. My hope is that, after reading, more and more people will start making sure they live healthy lives. If an extremely busy doctor can fit some regular sport into his life, the rest of us can do so too.

Your extreme workload means that we cannot do the interview face-to-face. To what extent has your workload right now been affected by the holiday season and the backdrop of closed wards and postponed operations in connection with Covid-19?

I work at the Department of Orthopaedics and Traumatology and, even though our hospital had a specialised “Covid-19” department with around 15 beds at the height of the pandemic, it was rather quieter at our department from the middle of March to the beginning of May. We had to cancel planned operations, and the number of injuries fell dramatically as a result of quarantine and the absence of tourists from the centre of Prague. The situation changed completely during the summer. Under normal circumstances, the operating theatre is quieter during the holidays, patients preferring major operations in the spring and autumn, but this year we have had to catch up from a break of almost three months, meaning that both operating theatres were working almost non-stop the whole summer. Which we managed to do only thanks to the fact that the whole team at the operating theatres really cut down on their holiday time. I would like to use this opportunity to thank them from the bottom of my heart.

Do injuries from summer or winter sports cause orthopaedic surgeons the biggest headaches?

Injuries from winter sports are certainly a massive headache. Accidents frequently happen at higher speeds, involving greater energy, and the results are often more serious. We also have a lot of head injuries.

You specialise in joint regeneration. If I can quote you from a television programme, “we still come up short on cartilage”. What can we do to avoid joint operations as we get older? Should we simply get used to the fact that joint replacements will become a standard medical procedure?

Unfortunately, I still stand by what I said. We are able to replace damaged ligaments and screw together broken bones, but we are still not able to repair ligaments in any meaningful way. We are still able to treat isolated demarcated lesions in younger people, but unfortunately we really are only able to repair diffuse cartilage damage in older people by replacing the joint with an artificial one. In order to avoid this, it is important to maintain a reasonable body weight, because our joints are burdened most when we are overweight. The joints feel every extra kilo, and even though joint replacement has recently become a standard medical procedure, it is only a good idea to take this step when there really is nothing else that can be done. In the past, we practically didn’t operate on patients weighing more than 120kg. Now, unfortunately, clients who weigh even 140 kg are not uncommon.

Sport for health, or permanent disability? How are Czechs getting on in terms of their condition and caring for their joints?

Elite-level sport is genuinely not great for the health. The training is often intense, the regeneration insufficient, and the organism suffers as we get older, whether we like it or not. This, however, is the case among elite-level sports people. I personally do not like banning sport when I am in the clinic. Always look for a sensible starting point, adjust the regime, choose a different type of sport. We have recently seen that plenty of people are looking after themselves more. Lots of them are running or cycling. I would probably recommend cycling the most. Unless you actually fall off the bike, cycling wears down the joints to the minimum.

You are the doctor to the men’s international basketball team, but you also look after women basketball players. I am wondering – do the injuries in elite-level sports people differ depending on what sex they are?

The injuries used to differ quite a lot, but the differences now are minimal. Women are far more athletic, faster, and the nature of their injuries is now almost identical to those in men.

You have taken several placements in Norway, Germany, and the USA. What sort of inspiration or lessons did you take from each country, whether from the perspective of medicine or lifestyle?

I studied part of secondary school in Norway, and then one semester of medicine in Trondheim. I personally took Norway to my heart. The people there really are a little cold at first glance, harsh almost, but managing to learn the language will endear you to them, and you will find that they are very good-natured and honest and that they have a good sense of humour. The health service is practically the same, the equipment in hospitals is very similar, although their mineral wealth means it probably looks more attractive to the lay person at first glance. The level of expertise among healthcare staff is practically the same, but we should certainly take an example from the way they listen to patients and treat them in general. In Norway, the doctor or nurse will always explain everything more than once, answer all questions. This is an area in which we are certainly lagging behind. Of course, this is partly a result of the fact that the doctor has far more time for a patient, at least half an hour in the clinic. This is something we can only dream of here. On the other side of the coin, the Norwegians look after their health far better. Most of them are good skiers and there are fewer obese Norwegians. What is more, the long distances involved mean that they don’t go to hospital with commonplace problems. I had several placements in the USA, at a clinic in Boulder in Colorado and at the Steadman Clinic in Vail. Both are top-class private clinics where the medical equipment and the appearance of the rooms are exceptional. Which come with its own problems, of course. On the day of an operation, for example, after arthroscopy of the hip joint, I saw patients hobbling to the five-star hotel next door on crutches because it was far cheaper to spend the night there.

How do you keep fit yourself? Top politicians do not lead by example, but how do doctors match their words with actions?

I have enjoyed telemark skiing and volleyball since my youth. I still play in the second tier in Prague and although I can’t jump as high as I once could, I still enjoy it. I began running and cycling more over the past year. I made a bet with myself that I would one day be able to manage a long triathlon, an Ironman race. First I bought all the literature to study, then the equipment, and all I need to do now is train. The little time I have available means it is not easy, so I go out running every day at 6:00 and head out on the bike at least once a week, when I can.

We are now hearing about female medical students and the discrimination they experience in certain areas, orthopaedics included. How do you see it?

I will be honest. It is true that certain areas are less suitable for women, but that does not mean they cannot do them. Orthopaedics, which sometimes requires quite a lot of physical strength, is one such area, but I do know plenty of talented women doctors in orthopaedics who work on small joints and are very successful.

I was wondering – how do you keep up your Norwegian? In this issue we are also looking at lifelong learning and working on yourself. Apart from sport, how do you manage to maintain an active knowledge of Norwegian?

I try to go to Norway at least once every two to three years and visit my “Norwegian family”. I still write to many of my friends from secondary school and university. And I use Norwegian on duty in the hospital. Lots of tourists arrive in the centre of Prague from Scandinavia and given that the Scandinavian languages are quite similar, I can sometimes use my Norwegian to talk to them.