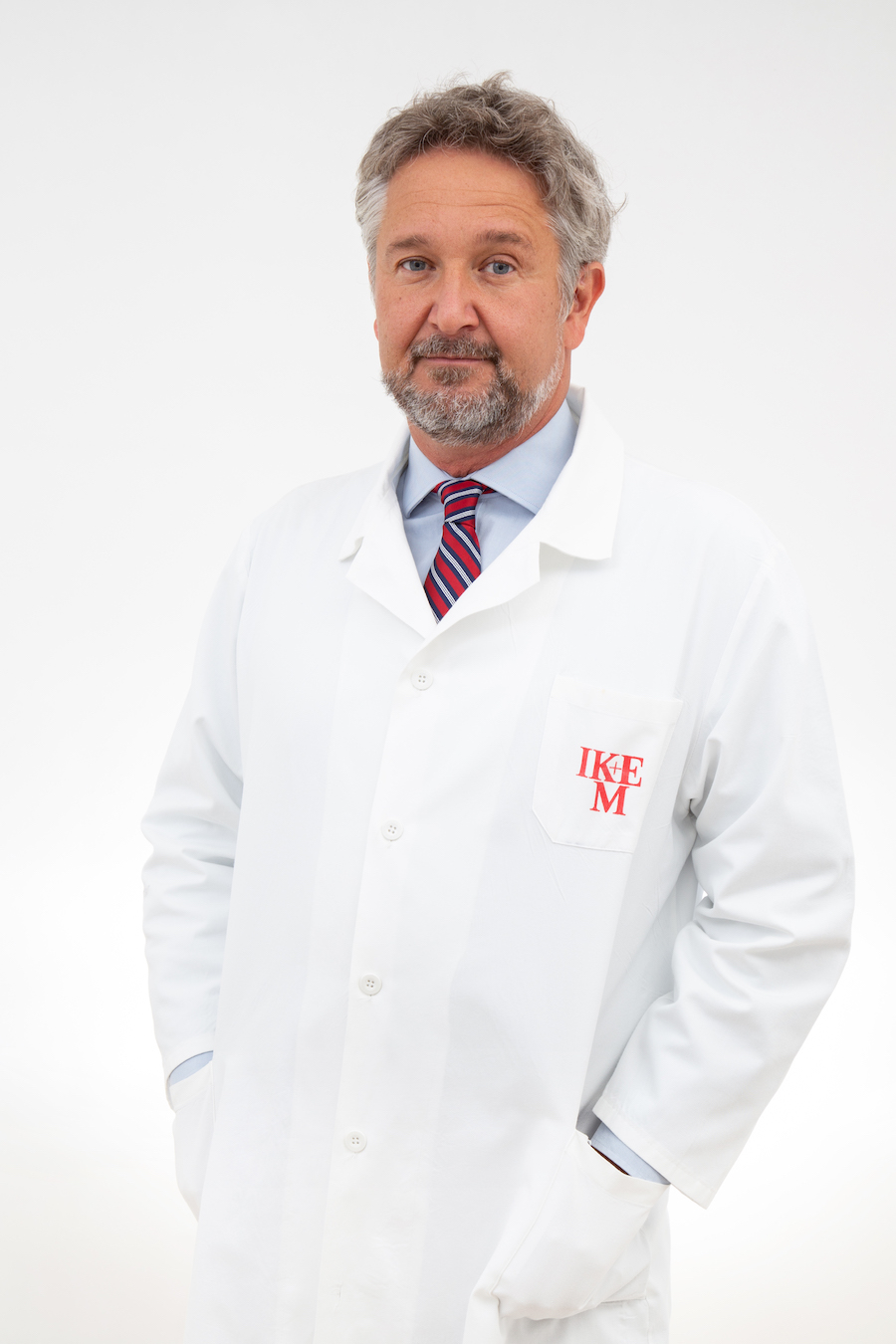 MUDr. Petr Smejkal, the chief epidemiologist at the Institute of Clinical and Experimental Medicine

How can one write about COVID-19 without eliciting unnecessary fear, yet without playing it down either? How can one avoid slipping into politics or polarising discussion on the compulsory wearing of face masks? And to whom should one appeal? Figures in various fields of medicine such as dentists, oncologists, anaesthetists and cardiac surgeons have publicly expressed their opinions on the COVID-19 pandemic. At the editorial board here at the Czech and Slovak Leaders Magazine, we wanted to interview this leading Czech epidemiologist, who manages to maintain impartiality and perspective. We are pleased to be able to facilitate this interview with MUDr. Petr Smejkal, the chief epidemiologist at the Institute of Clinical and Experimental Medicine. MUDr. Smejkal completed postgraduate studies at Columbia University, with a degree in internal medicine from the USA and in infectious disease medicine from the Czech Republic.

He advocates wearing face masks in indoor environments and avoiding enclosed spaces without ventilation as far as possible, while supporting the broadest possible testing. He also admits that the public should be given understandable explanations for the figures released around the coronavirus epidemic. In addition to the total number of tests conducted, he also looks at the overall percentage rate of positive tests amongst the numbers tested. Another figure we should be paying attention to is the number of people requiring hospitalisation and oxygen therapy. Test results should always be made known within 48 hours. He says that we will experience the course of the COVID-19 pandemic in the form of a “dance and hammer”. While the hammer refers to a lock-down, by dance he means a variety of appropriate responses to the current incidence. We can likely anticipate various forms of this dance until at least spring 2021.

We conducted the interview remotely, because MUDr. Smejkal was spending part of August on a working trip in the USA. Not only did we compare the situation here to that in the United States, but we also discussed fears of a second wave and his recommendations in terms of vaccinations and how to act in the autumn months.

Doctor, what took you to the USA? How is the situation over there, and how was travelling during a pandemic from the Old Continent to the New?

I’m currently working in the small Maine Coast Memorial Hospital, on the beautiful coast of the state of Maine, where I lead the “Hospital Infection Control Team”, meaning I’m working as a hospital epidemiologist, while also working for the NICU and Internal Medicine department. We are currently dealing with a lot of problems related to COVID. It is particularly valuable to experience the situation from the American perspective, where COVID has had a much worse impact. In the Czech Republic, vigilance and fear have dissipated. Because in comparison to Great Britain, Italy and the USA, no large wave occurred here, people often tend to underestimate the disease. COVID-19 is not the flu. It is worse.

My journey across the ocean went smoothly. I hold a so-called Green Card and I’m a doctor, so there were no problems for me entering the USA. In other respects, we have to get used to empty aeroplanes; there were just thirty of us on the flight from Amsterdam to Boston. Empty airports, no queues. You might almost say what more could you ask for? But that’s probably the only positive aspect of the current situation.

In regard to the current situation in the USA, the situation is gradually improving, including in southern states such as Texas and Florida which were badly afflicted. Maine is in the north-east, in the New England region where the situation is similar to that in the Czech Republic. Geography helps; there are a lot of forests and lakes in the state, while population density is low. Otherwise, it is true that the USA has almost been the country most affected by the pandemic in the entire world: statistics from the end of August register 183 000 deaths related to COVID-19. This can be the outcome when politicians don’t listen to experts.

It appears we have a difficult autumn ahead of us. You, however, are not afraid of a so-called “second wave”. You would welcome stricter hygiene measures such as the compulsory wearing of face masks in indoor spaces. It would appear that the public is against such measures. While you were not here, a directive was issued on the obligatory wearing of face masks from 1 September, which was then revoked 24 hours later. What rules do you follow personally, and would you therefore recommend to others?

Let’s first look at that feared term, the “second wave”. In terms of number of positive cases, we are already experiencing this if we call the March-April period the first wave, something I would take issue with. It is important to emphasise that despite the increase in people with positive COVID-19 tests, the increase in numbers of seriously ill is smaller. This can, however, change. I think we got rid of face masks too early. This happened in some of the USA’s southern states and a second wave really did happen.

Personally, I avoid enclosed spaces, and I don’t go to bars or parties even though I am a very sociable person. I just try to be out in the countryside as much as possible. In both the Czech Republic and the USA.

I’m lucky that I’m a doctor. So I wash my hands very often, I’m used to wearing a face mask as a doctor and I wear it everywhere when I’m indoors with large numbers of people. I’m conscious that face masks protect others, and as a doctor I come into contact with COVID more frequently. I could therefore infect someone else even without displaying any symptoms, and I’d hate for that to happen. In the USA, people will tell you that you need to put on a face mask. It seems, in contrast, that Czechs have begun to feel a great aversion to face masks. It’s probably because we’ve come through it all without large losses of life so far. We nailed it in March and April.

Now there is a lot of discussion about getting flu vaccinations, not as prevention against COVID-19, but to prevent concurrent COVID-19 and flu, which can be dangerous. Do you recommend this?

Personally I recommend vaccinating all patient age groups this season. A concurrent COVID-19 pandemic and flu season could turn ugly.

As I wrote in the introduction, the opinions of not just scientists, but also doctors themselves, often differ greatly. It is often the most extreme who get into the media. So who can we trust at the current time?

I certainly cannot recommend trusting even medical “authorities” who tell you something different every month. And don’t trust those of them whose opinions are not backed up by facts and are not based on the outcomes of scientific studies. The term “evidence-based medicine” is often used. In regard to face masks, for example, there are a lot of myths, starting with the fact they are harmful, they increase bacteria and CO2 concentration and other similar nonsense. There is a lot of information out there, and we have to learn to think critically and take responsibility for interpreting it. The first and most important step is to start asking for and verifying sources for different pieces of information.

In Great Britain, Prime Minister Boris Johnson launched a healthy lifestyle campaign after he ended up in intensive care during a severe bout of COVID-19. Would you welcome a similar campaign in the Czech Republic? Most Czech politicians probably aren’t great healthy lifestyle examples. What appeal would you make to Czechs?

I would certainly welcome such a campaign. Let’s face it: compared to other nations, Czechs do a lot of sport, but we like to rationalise alcohol. We are world leaders in beer consumption, something we sometimes justify by claiming “beer is healthy and full of vitamins”. An education campaign promoting daily exercise, being outdoors, the importance of sufficient vitamin D and generally improving one’s immune system would help.

In your CV, I was fascinated that you were one of the founders of the Military University Hospital’s HIV/AIDS Centre. Like COVID-19, HIV was also an illness subject to many conspiracy theories. Do you see any similarities and what can we learn from them?

I do see similarities in the myths and the fear which have accompanied the disease from its outset. And unfortunately also in the stigmatisation of the sick, and accusing “others” (other ethnicities, other social groups) of spreading the virus. Nature has always surprised us, and viruses are more insidious than bacteria. They don’t discriminate; poor or rich, we are all the same. We need to be patient in terms of treatment options; it’s going to take a while, so we need to focus more on prevention. The good news is that we know far more about COVID over this short time than we did about HIV/AIDS in the 1980s.

Our interview is drawing to an end. One of your interests is stand-up comedy. From the perspective of an epidemiologist, is it true that a cheerful disposition is half the battle? Many people I know are beginning to experience anxiety and fear over autumn, the possibility of another lockdown and the closure of schools, something for many linked with existential worries. How can we counter these fears?

I did stand-up comedy! With professionals from Underground Comedy. My doctor stories were initially successful, until I was so focused on my duties as a chief doctor that the director had to tell me: “Doctor, you say fascinating things, but they’re not at all funny!” So I had to put an end to that.

Humour is the most important thing, and we doctors often laugh a lot with our patients. We should try to spend more time with friends, telling stories, going to the cultural events as faraswecan.Andifwecan’t,then–asmy favourite author, Kurt Vonnegut, said – Enjoy the little things in life because one day you ́ll look back and realize they were big things.