“Let’s help ONE ANOTHER” 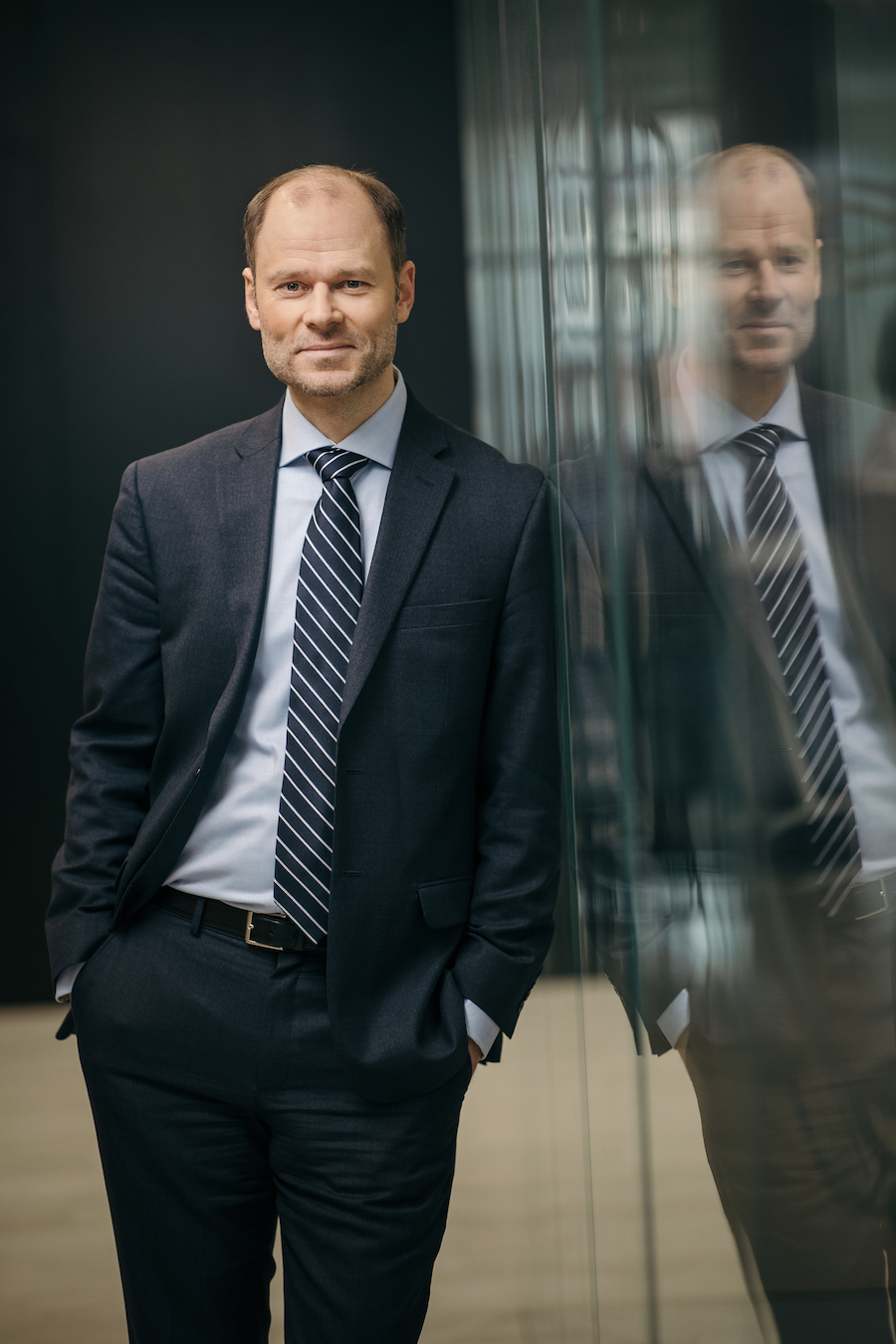 Radek Špicar, Vice-president for Economic Policy and Export at the Confederation of Industry

Radek Špicar currently occupies the position of Vice-President for Economic Policy and Export at the Confederation of Industry. His career to date includes unique experience in public administration, as well as the private and non-profit sectors. He served as secretary to the Deputy Prime Minister for the economy, was a member of top management at Škoda Auto, and was head of the Prague branch of the Aspen Institute think tank. I have known Radek since our student days, and we meet at gatherings of the Oxford and Cambridge Alumni Society. When I was looking for a person to appraise the current situation with a bird’s-eye view for the latest issue of Czech and Slovak Leaders Magazine, to offer a vision and at the same time bring together the Czech and international context, it was Radek who came to mind. Radek Špicar is married with two daughters. His wife works in municipal self-government.

Let’s go with a positive start. How did you celebrate New Year’s? What did you wish for the Czech Republic?

I celebrated at home with my family. It was the least I could do for the Czech health services and for the doctors working to the very limit in overcrowded hospitals for several months on end. And it was in that context that I wished for the Czech Republic to be able to experience New Year’s next year in the way we are used to: with friends in the mountains.

We will continue… surprisingly… with COVID-19. I will paraphrase the famous Czech film Pelíšky: I am just wondering where (our comrades) got it wrong? Since the first wave, I have yet to see any major shift in the communication or digitisation of public administration, or any greater willingness among businesses to send employees to a home office; protection of the elderly has failed, and over time face masks have started running out. How do you see the situation? Were we forced to repeat the lesson?

I see movement particularly in the private sector and industry. While the first wave surprised some companies and the epidemic situation forced them to stop production for an unprecedented length of time, they were much better prepared for the second wave. The summer months were not wasted and were used to introduce the principles of smart quarantine. As a result they are now able to test, trace and eliminate those infected. They don’t have to shut down operations like they did last year. That is one of the reasons I believe that industry will return to growth this year and will again be the driving force of the Czech economy.

Vaccination is now the top priority for us all. For the public sector to be able to cope with this, we have offered it assistance with a communication campaign that we consider to be inadequate, and our own vaccination capacities, which can help the state to speed up the process of vaccinating the population. From May, companies will be able to help the state with vaccination.

In the second wave of the pandemic, I didn’t notice the social solidarity seen abroad. It reminded me a little of dodgeball at school – “everyone against everyone else”. Those who received some sort of compensation are usually seen at the expense of other groups. Compared to abroad, there is a lack of solidarity between small and large, workers and entrepreneurs… It seems to me that you are the first to highlight the problem at large enterprises and those of the smaller companies linked to them. Where do we start with solidarity if there will soon be nowhere to take it from?

This is an important topic for me. I consider it essential that we overcome animosity and strengthen the links between employers and employees, between owners and managers, between large and small businesses.

I consider one of the biggest problems to be that the individual component parts of our society do not cooperate with each other, in the way I know from the Anglo-Saxon countries. Politics in this country does not cooperate sufficiently with the academic sector. Business has limited relationships with the world of art. Fortunately, the pandemic is changing this for the better. What the Czech Technical University did in the development and subsequent production of protective respirators in cooperation with Czechinvest and Beneš & Lát is exactly what the whole economy needs. I hope that this type of cooperation and interconnection among the different worlds will not disappear with the end of the pandemic. We need creativity, and this comes primarily from diversity, from connecting that which cannot be connected.

The European Union, of which you are a huge advocate, has so far emerged stronger from the crisis. You are a well- known advocate of adopting the single currency that is the euro – are you looking forward to renewing this social debate after the pandemic? How do you expect the discourse to proceed?

What we know from previous crises has been repeated during the pandemic. The global economic crisis in 2008 and then the migration crisis in 2015 developed in the same way. Both caught the EU unprepared and incapable of responding, which quickly resulted in a loss of confidence in the European integration project. It then turned out, however, that the EU could not respond because it did not have sufficient powers to do so from the member states. It then gained them, both in economic policy and in migration, and if these crises were to happen again, the EU would be able to react far more effectively. This led to a strong increase in confidence in the integration process, which according to Europe-wide research stood at its highest-ever level in the years after 2015. I expect the current crisis, caused by the COVID-19 pandemic, to develop in the same way. This is already happening, in fact, even here, in one of the most Euro-sceptic member states. Czechs too realise that without the EU, we would have the vaccine much later, and at far greater cost.

And as far as the euro is concerned, only the forthcoming elections can bring about a change in our approach. Nothing else.

The crisis is an opportunity, even if this is of little consolation to many sole traders or to those who have lost loved ones. Where are you looking for hope? Where do you see the light at the end of the tunnel?

As someone who moved from employee to employer a few years ago and who knows how hard it is to make your way on the market and survive in the Czech business environment, I am very sorry for all those who will not survive this crisis. There will be positive impacts too, though. Czech employers, who used to be very conservative in this regard, might finally get used to the fact that even he or she who they cannot see on the other side of their office window can work; and working from home will become more commonplace than we have been used to. Hopefully cooperation between universities, the state and companies will last, as we have tried it in recent months. And it will also very much accelerate the 4th industrial revolution, meaning digitisation, automation, and robotics; in other words, the modernisation of Czech industry, which we urgently need.

Is there any subject, apart from the EU and the “end of cheap labour”, that you see as being fundamental and that falls within the normal media froth of the day?

There are plenty, and the ongoing pandemic has illuminated them well. For example, the huge qualitative gap between the private and public sectors. The first one pulls us upwards, the second rather downwards. But it will not be possible to catch up with the world’s most successful countries if the public and private sectors do not work at the same level of quality and help each other in reciprocal symbiosis.

What has the crisis taught you personally? And what is your recipe for mastering a two-career marriage, home office, and home schooling?

As a family, we are managing well. Both my wife and I have jobs that allow us to work to a great extent from home. Our daughters go to a school that is coping with distance learning. We have a fast enough Internet connection at home and notebooks for all members of the family. But I am increasingly aware that many families are not so lucky and that the crisis is hitting them hard. When I see the situation single parents find themselves in, people who don’t have enough equipment for their children, I feel terribly sorry for them. I therefore consider it to be one of the main tasks of the state, and of us all, to do everything possible to ensure that the current crisis does not create an even larger gap in our society and result in a further increase in the number of people who have to deal with what are literally existential problems.