“Respect and debate are the foundations” 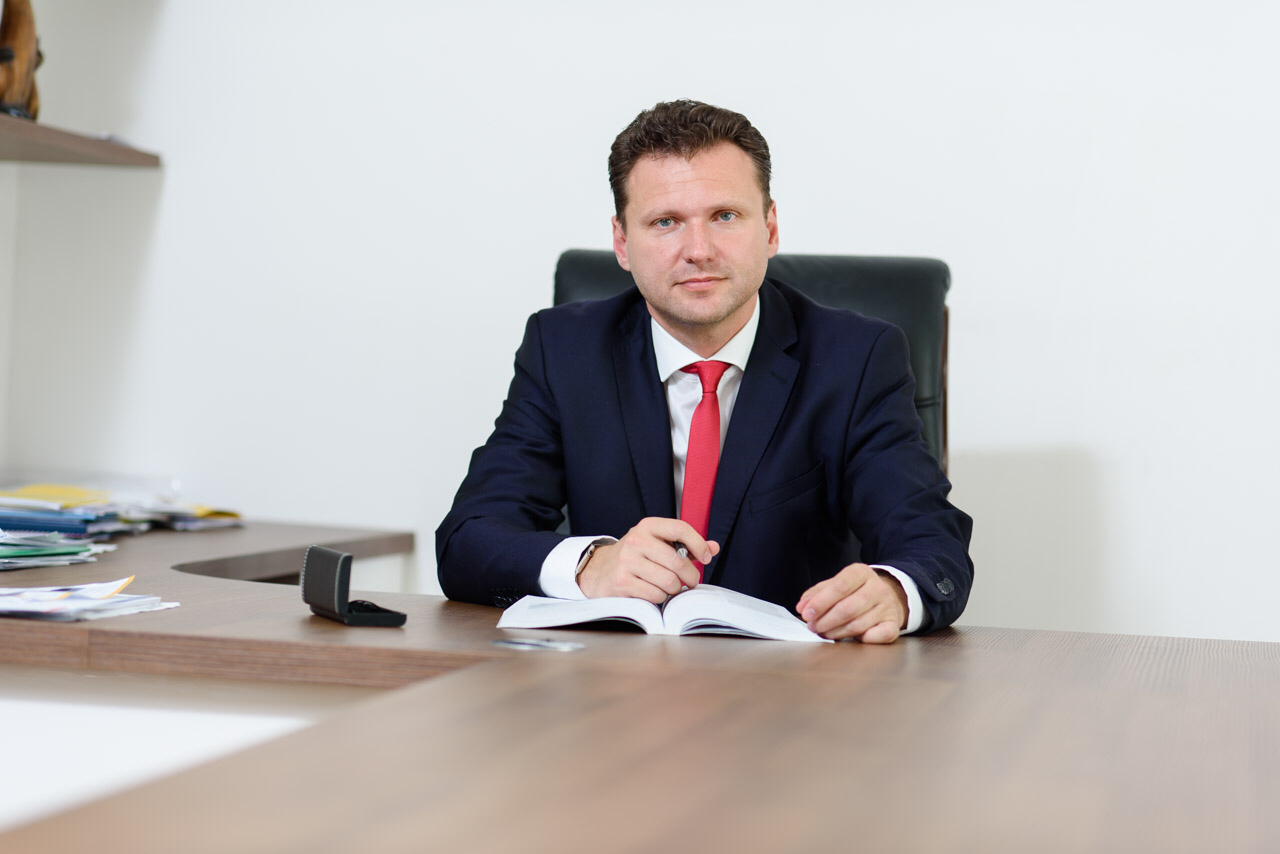 Radek Vondráček, President of the Chamber of Deputies of the Parliament of the Czech Republic

Arranging an interview with the man holding the state’s third highest ranking constitutional position attested to one of those coaching rules, which goes: “the greatest barriers are those we build in our own mind”. Getting an interview with Radek Vondráček wasn’t as difficult as one might think considering his top position. In fact, his secretariat responded promptly and eagerly. I don’t believe in chance, but rather in synchronicity. The interview took place the morning after President Zeman’s inauguration. Radek Vondráček had just had a long and difficult day managing a meeting of both parliamentary chambers in his role as President, or Speaker, of the Czech Parliament’s Chamber of Deputies. Remember that a number of deputies left this meeting to express their disapproval of the President’s speech. I was struck that the statement Mr Vondráček provided on this incident to the media began by thanking his colleagues for their careful preparations for the meeting, and only then giving his opinion. I saw it as a conciliatory gesture in the context of a divided society. The troubled atmosphere in Czech society is clearly apparent. People have taken to the streets for the first time in many years, first to express their solidarity with the murdered Slovak journalist, Ján Kuciak, and his girlfriend Martina, followed by protests against Communist deputy Ondráček being appointed head of the Chamber of Deputies’ Commission on Activities of the General Inspection of Security Forces (GIBS), and also by protests supporting independent media.

We were both a little tired and downhearted that morning. Nevertheless, we endeavoured to rise above ongoing events and under the bust of Tomáš Garrigue Masaryk, we discussed the Czech Republic’s past and future. How does he see today’s parliament, and the parliament of 100 years ago? What does his young son say about his work in politics? And how is he able to the help the Zlín Region as a proud native of Kroměříž? For me, it was extremely rewarding to look into the thinking of a politician who in just four years in politics now holds one of the highest positions in it. Yet in my opinion, he remains a humble and gracious man.

Is the Czech Republic a divided country?

I see conflict of opinion as having been continuously fed since the election. I see this division in my family, amongst my friends, in bars and in the parliament. I can’t compare how divided we are compared to other countries, but look at what’s going on in Slovakia. I’ve had the opportunity to visit Austria, where society is also polarised, and never mind the United States of America. So it’s up to politicians to be able to keep a certain perspective. And it begins with how you communicate in parliament. If politicians are going to continue to stand in front of the cameras and create conflict, then we won’t be able to move forward as a society. Everything can be dealt with substantively and practically. Problems occurred in regard to invitations to the inauguration. I hadn’t realised there was any problem; I found out about it from Twitter. ODS leader , Mr Fiala, came to me, told me about his problem and we tried to find an appropriate solution. In contrast, Mr Kalousek lost no time in making a statement, provoking further conflict, and totally unnecessarily. Politicians have got to be able to speak to each other, and people will follow. That’s what leadership is about, and that’s a topic your magazine also focuses on.

We may not have the same opinions, and in fact I wouldn’t want us to have the same opinions. The hardest test for any democratic politician is to learn to respect dissenting opinions. It’s the same in life. We each have our own circle of friends and acquaintances, and so we aren’t confronted with the challenge of learning to respect others with a different opinion. I myself remember when I began in politics in 2013 and I felt the need to convince everyone else that my opinion was the best, I was right and others didn’t understand. After five years in politics, I know that people have different opinions and I respect that. Naturally, I endeavour to promote my own opinion, but I also respect other opinions. Respect and debate are the foundations. But they are very fragile foundations. All it takes is one act of offence to trigger a set of responses which can spiral out of control.

Your political programme, with its slogan, “changing the political culture in the country” comes with the subheading “being polite isn’t a weakness”. Are you managing to fulfil this pledge?

As the President of the Chamber of Deputies, I’m doing my utmost to be non-partisan, to rise above current conflicts. Naturally, I am aware that within our constitutional system I cannot be 100 percent objective, but I really am trying to do my best. In the end, actions speak louder than words. I could give you many examples where I have given everyone equal footing. Furthermore, I have tried not to make a decision from a position of power, or by using some kind of trick. If an agreement isn’t forthcoming, I am happy to abort discussions and call on the leaders to come to an agreement. It’s up to others to evaluate my actions.

We’re holding this interview under Tomáš Garrigue Masaryk’s bust. Do you think it was harder to run parliament in 1918 than it is today?

I’d really love to know what our founding president would say about the situation today. But on the other hand, let’s not idealise the First Republic. I’ve read a number of speeches and discussions on the Parliament at that time. Human nature is always the same. MPs then certainly didn’t give anything away for free. And after all, one of the parliament’s roles is to deal with conflicts of opinion so they aren’t dealt with on the streets, as is happening now.

You’ve been in politics since 2013; since 2017 you’ve held the third highest constitutional position. How has your perception of politics changed over those five years?

Before I entered politics, my perception of the parliament was only as conveyed by the media. And the media doesn’t look for positive examples, but rather conflicts and extremes. You won’t find a report saying, “MPs behaved civilly today and came to agreement on all items.” Yet this happens. I could give you the example of the Act on Conflict of Interests, which aims to help mayors and officials at municipal council offices so that the declarations of assets they make do not overly intrude into their personal and family life, and I’m glad it was easy to come to an agreement about this act. I myself know of mayors who have chosen to resign their roles and leave politics rather than have their privacy, and in some cases the safety of their families, put at risk. On the other hand, the composition of the Chamber of Deputies today is rather unusual. We have nine parliamentary party groups and no coalition. The negative mood and missing structure is inevitably reflected in the everyday work of the Chamber. We form ad hoc alliances; this is a turbulent, fragmented era. I myself can see a great difference in my previous role as First Vicepresident, and now in my role as President. For the past three months, I’ve been almost constantly at work.

The Zlín Region’s greatest treasure is its wonderful people. I come from Haná, but Moravian Wallachians and Moravian Slovaks also live in the Zlín Region. Anyone who comes from here knows the differences between us. But we’re all Moravian. I appreciate the hard-working and modest people who represent our greatest wealth. We don’t have oil fields or mines. Anyone who comes will see the beauty of our nature and the fact we are a border region. I’d also like to say that we are a Region with a lot of industry. We have many top manufacturing businesses which specialise in production, and they often also do their own research and supply large companies the world over.

You come from the beautiful town of Kroměříž, which is a UNESCO World Heritage Site. There is still debate, however, over to what extent this award has actually helped tourism and development.

We are very proud of this award, and we even have a UNESCO Club, something which is unique as having been set up at a local level, and not a national level. It is my conviction that this award helps us, and I enjoy boasting of the fact when I meet with ambassadors, for example. There are loads of fascinating tourist destinations in the Czech Republic, but tourists come here for a short time. This award undoubtedly helps to steer them here.

You say on your website that your previous work as a lawyer has helped you to appreciate the problems of people from a town with a population of 30 000 people. Are these problems any different from those of people living in Prague?

It’s always those thorny issues which get to lawyers. An example I could give is the regulation on building energy performance certificates, which complicated property transfer contracts. We subsequently dealt with this in parliament. On the other hand, people are the same everywhere, and they have the same worries. In terms of wage levels, the Zlín Region is the Region with the second lowest average wage. In fact, our nurses have the lowest wages in the Czech Republic. It is only due to the wonderful people that the health service works.

You’re the proud father of a son and a daughter; what future do you see for your children? Can you even reconcile politics and your family life?

I don’t want to predetermine any direction for them; I want them to make their own decisions. Parents should give them maximum support. I’ve led them to sport; they play tennis, ski. I also focus on their language education, and both play musical instruments. My wife does a lot to bring them up, and the grandparents also help. I’m the kind dad who spoils them at weekends. But still my nine-year old son always asks me each week whether I “really have to go to Prague to be Speaker of the Chamber?”

Finally, I’d like to return to the start of our interview. The Czech Republic is doing really well, and not just economically. All the ambassadors here praise it as a wonderful place to live. Why are we not satisfied?

I think it’s our national characteristic. They told me in Brussels that we’re the second most Eurosceptic country. But I told them: “The Eurobarometer just isn’t set up for Czechs.” We’re always going to be grumbling; it’s in our nature. It hasn’t been easy for a small nation to survive within Central Europe where loads of wars have begun and played out. We used to make fun of Moscow, and now it’s Brussels’ turn. Perhaps we can be proud of this in our own way. I personally look to the future with optimism.