“It is our responsibility to reach the goals” 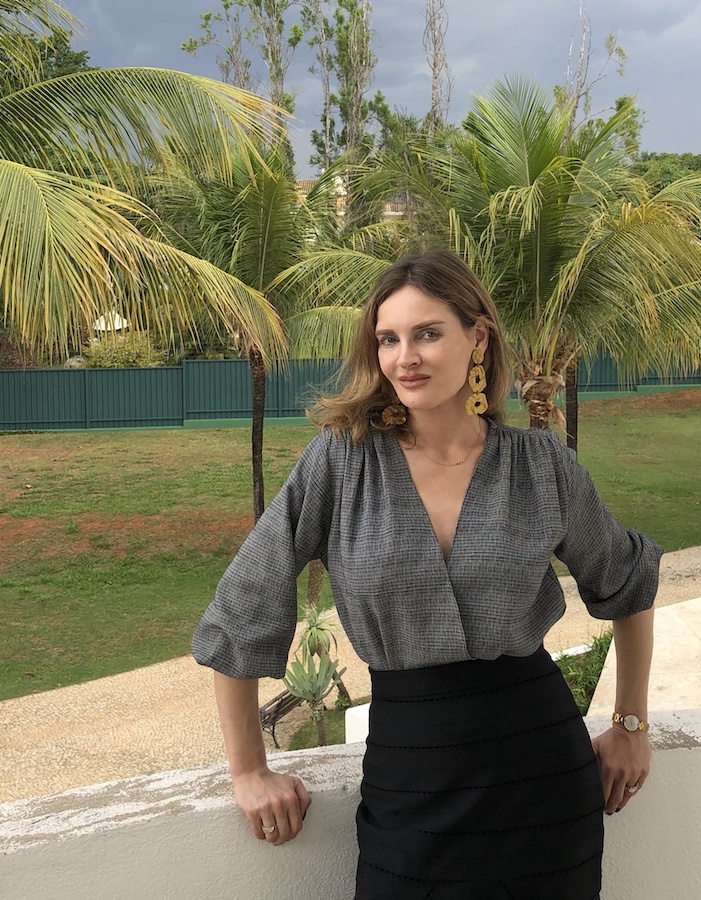 Sandra Lang Linkensederová, the Ambassador to Brazil, Guyana and Surinam

I have known Sandra Lang Linkensederová since the beginning of her diplomatic career in 2002, which started with her training at the Diplomatic Academy of the Ministry of Foreign Affairs. After the Diplomatic Academy, she worked at the Department of Security Politics at the so called “headquarters”, abroad, she served on various postings in Lisbon, Peking and Brussels. Parallel to her postings, she continued her university education in Lisbon and Moscow. She is married and has a son. In her free time, she likes photography and playing tennis. In May, she was appointed the Ambassador to Brazil, Guyana and Surinam. She has served in Brazil as the deputy ambassador since 2017 and in August 2018, Sandra Lang Linkensederová received a special medal for the Peacemaker for the advanced development of the Czech- Brazilian relations.

Dear Sandra, congratulations on your first ambassadorial posting, being appointed the Ambassador to Brazil, Guyana and Surinam. Can you share with the Czech and Slovak Leaders Magazine readers what does it feel like to receive the credentials as an ambassador from the President?

Receiving the credentials from the Head of State is undoubtedly a very special moment. It is a great honor to be trusted. It might be also a joy or a certain relief because it is the end of the process called agrément, meaning that the hosting state does not object to your appointment.

However, above all you realize that you have accepted an enormous responsibility towards your country. The solemn moment of presenting my credentials to the president of Brazil is still to come. Due to various circumstances, I am likely to present these already to the new Brazilian head of state who shall be elected in the presidential election to be held in the month of October. Presentation of my credentials in Suriname and Guyana will follow.

You became an ambassador in May and already in August you received a special medal for the development of Czech – Brazilian relations. What is the current state of bilateral relations and what is your agenda for further development?

LatinAmerica,andparticularlyBrazilisoneof the most natural and logical overseas partner for the Czech Republic, having rich and long cultural as well as historical ties with Europe. Our mutual relations have been very friendly and stable for centuries. The first footprints of the Czechs in Brazil can be traced back to the 17th century when the first Jesuits came into the New World, followed by court scientists and adventurers. In the 19th century, Brazil had opened the door for European colonists, including Czechs, seeking a fertile land to cultivate. It is important to mention that Brazil was the first Latin American country to recognize the newly founded state of Czechoslovakia in 1918. Since then Czechoslovak products gained a very good reputation and the Czechoslovak companies were able to seize a part of the large Brazilian market. The Czech Republic was not only able to further develop cooperation based on favorable conditions but also add new dimensions of cooperation in other areas, such as academics, military, and research and development or joint development in industries such as aviation, just to mention few examples. My natural ambition is to further strengthen our cooperation, supported by high level visits exchanges. Supporting the Czech business and Czech companies and finding new stimuli for economic cooperation ranks at the top of my agenda.

When speaking about Czech-Brazilian relations, it is worth mentioning that both countries do not have any geopolitical antagonisms. This fact permits partnerships in the area of defense and security industry. Therefore, the Czech Republic opened a Military Attaché Office in Brasilia in 2015 to further strengthen the area of cooperation. I was decorated with the medal called Medal of the Peace-Maker (Medalha do Pacificador) and is intended to reward, among others, those who contributed to the amicable relations between the Armed Forces of Brazil and the nation they represent. I am restrained to believe I have already contributed significantly, however, it is a great and unexpected honour and I will continue to do my best to prove that I deserve this gesture of enormous value.

My frequent question to ambassadors is the following: what is it that Brazilians do not know about Czechs and what Czechs don ́t know about Brazilians?

I was very pleased to find out how many Brazilians had already visited the Czech Republic, despite the fact that my country is not that close and the touristic competition in Europe is quite high, and Brazilians returned very satisfied. Many Brazilians know famous Czech beer and the Czech crystal glass. Prague’s Infant Jesus represents a special spiritual value for historical reasons and his little statue can be found in many Brazilian households. Many Brazilians are aware of a very particular detail in Brazilian history – Brazilian president who had founded the new capital Brasilia (inaugurated in 1960) was called Juscelino Kubitschek and, indeed, he had Czech roots. As for the Czech people, their notion about Brazil depends on what area they are from. If we speak about the general public, most of Czechs have heard about beauties of Rio de Janeiro, Brazilian carnevals, Bossa Nova music or the breathtaking beaches. Last but not least, let us not forget the art of Brazilian Jiu-jitsu.

Let us continue with a retrospection. It has been 16 years since you entered the Diplomatic Academy of the MFA to pursue the diplomatic training. Looking back at your beginnings, what beliefs and hopes you had have stayed the same and which ones changed?

I actually wished to join the foreign service at the age of eight, when I lived in India and I met diplomats for the first time in my life. From my childish perspective, they had a highly exciting profession, super-secret, tremendously important, and in addition to that, they were allowed to travel to abroad. Of course, this reflects the times of late 1980’s, during Czechoslovakia and the Cold War. This reality has changed soon after, but my determination stayed. The reality in the age of on-line media and on-line social platforms is changing very fast. Before we get used to a new world order, it is being changed again. That is why I usually do not create expectations. I like to face reality without any preconceived ideas, which was the case with my beginning of the diplomatic training. However, I am convinced that everything we get in our life has a great added value because it creates a substance that can be further expanded. I remember being very happy at the Diplomatic Academy, I enjoyed new people, new experiences and new perspectives. The Diplomatic Academy management had a great approach, creative and highly professional. In a friendly environment, it was our tutors’ ambition to make us the best possible prepared. However, every school gives only the basic guidelines. It is our responsibility to reach then the goals.

If someone told you that in 16 years you would become an ambassador, how would you react? Looking at the new generation of diplomats, what is the career advice you would give them from a position of a senior mentor?

Had someone told me that, I would have said: “that is good news because it confirms that I chose the right professional path, where I will succeed by working hard and having some luck at the same time.” My advice to the new generation of diplomats is simple: “Do not rush with regards to career positions, stay humble and try to place the information into the right context in order to understand the reality”.

For many women, you might be a role model. Working mothers in leading positions are still rather an exception than a rule, both in public as well as in private sector. What is your secret sauce?

Frankly speaking, I consider myself a traditional woman and I have no doubt that my family and my little son is my clear priority. If I want to perform demanding and time-consuming work without abdicating to the effort of creating a cozy and thriving family place, I must strive for good time management and a rational list of priorities. Offering compromises in order to get them back is also something I would stress. However, choosing the right and a strong partner is the condition above others and I confess I would have never accepted this challenge without the consent and support from my husband.

Last but not least, we are celebrating 100 years of Czechoslovakia. Being a representative of a state, what is your anniversary greeting to the state?

Well, Czechoslovakia does not exist anymore. However, a new and a beautiful child named the Czech Republic was born. I wish to the Czech Republic admirable achievements, hardworking people and may their intellectual potential can bring not only the deserved portion of the world market but also prosperous and fulfilled future.