“Man shall not live on bread alone”

It was Václav Havel in 1998 who mentioned me as a possible successor to the press. We were close friends and we had been cooperating for many years. Since then I have been frequently asked about my willingness to become a presidential candidate. I tend to answer in the following consistent manner: I have very deeply assessed the pros and cons and still, the arguments against are stronger. I believe that for the Czech society I might be more useful in my current role. The role of a “public intellectual”, i.e. a writer, a priest and a university lecturer, gives me freedom of expression based on my moral sense and wisdom and I am completely free, having no constraints imposed by political institutions. During this very year, I have realised that I refuse to share hysterical and panic reactions against both refugees and Muslims (albeit scarce in our country), and I am against the mainstream opinion in the society. In order to win the votes in the atmosphere that is currently prevailing in the Czech society – and that is most likely not going to change within next two years – I would have to use the same proclamations as politically successful populists – something that counters my conscience and my experience that I have gathered travelling and studying all around the world. The ability to stay true to my conscience is the most precious thing above anything, including a presidential seat at the Prague Castle.

Since we are discussing speculations about you becoming a candidate, you mentioned that you would need to get a “dispens from Vatican” or “to be temporarily released from the priest service”. Can you be more specific with regards to priests and their involvement in active politics? You are also a part of a society, so you should have both rights – to vote but also to be elected.

According to the Czech constitution, a priest has the same rights as any other citizen.  However, the Canon law does not allow a priest to hold posts linked to political power while exercising priest service at the same time. In case he/she wants to become a candidate, a priest must ask the Bishop or the Pope for exception – the so-called dispens from the Codes of Cannon law or to give up priest service or priest office for a certain period (or definitively). Even if the priest gives up (or is released from) the priest office, the sacrament of priestly ordination stays. According to the Canon law such sacrament is “signum indelibilis (indelible sign)”, but he cannot perform tasks linked to ordination and he can be released from priest obligations, including celibacy.

For me, personally, the priest mission is a source of profound happiness. In my Academic Parish of Prague, that I have established, I have baptized more than 1000 adults, most of them being university students. This parish has become an important cultural centre and also a centre of an ecumenical and intercultural dialogue; we have had the opportunity to host many important Christian, Jewish, Muslim and Buddhist leaders, including Tibetan Dalai Lama. I feel a deep responsibility for such place, being a unique formation of cultural, spiritual and moral backgrounds of more than two generations of young people. That serves as a reason that I would consider the possibility to become a candidate for the president only in an extreme case – only if I had not seen someone else to defend similar values with a bigger or equal chance to be elected.

Now, let us discuss the second significant award – The Templeton Prize – you have received in 2014. The Templeton Prize is an equivalent to Nobel Prize for Religion and you have received it not only for your attitude during the totalitarian regime, but also for “an attempt to bridge a gap between different religions, for leading their protagonists for more conciliatory relations and for mutual understanding”. Are we truly on a way towards understanding or rather towards a big inter-religious conflict as could be judged given the recent summer incidents that were marked by the murder of a priest in France?

Secular societies have forgotten that religious symbols and religious rhetoric serves as an accumulator of an enormous energy, which can be used for both good and bad causes.  Just due to the very fact that religion, and now particularly Islam, is abused by criminals, it is essential to nurture an interreligious dialogue as well as a dialogue between religion and secular culture. Criminals from the so-called Islamic state, which has been strongly condemned by all important religious authorities of Islam, want to spark a conflict between the West and the Islamic world. They are assisted by those who cannot distinguish between Islam and jihad criminals. The majority of the current “jihadists” are not religious people, they usually know only few cut out sentences from the Koran. The point is not that religious Muslims are becoming radical, but rather that political radicals use religious rhetoric. This can change if the substantiated anger of the West against terrorists transforms into anger against Islam as such. The Catholic Church can play a significant role, since it can understand both sides – Islam on one hand side, as they have many values in common, and secular humanism on the other side, since this was born on the roots of Christianity. Therefore, the Catholic Church can help mutual understanding and help prevent disastrous conflict, and for that reason, I am very much engaged in this dialogue of cultures nowadays.

Being interviewed for the Czech and Slovak Leaders Magazine, how do you define a leader yourself? How do you define leadership skills? And do you see enough leaders ready for challenging times in the Czech Republic, Europe and today’s world?

With regards to the Czech political scene, I do not see many leaders who could be true leaders, i.e. credible moral authorities, not only pragmatic power managers. I know many people who could grow to become leaders among young people, especially among those who studied and gained experience in the West. The challenge is that many capable individuals studying abroad at top universities do not wish to return home. They do not like the local political climate and particularly scandalous talks and views of Miloš Zeman and those who surround him who try to sway the helm from the West to the East.

As far as European scene is concerned, I value Angela Merkel and German president Joachim Gauck. By the way, Mr. Gauck is a former Christian pastor and Mrs. Merkel is a daughter of a pastor, similarly to Theresa May, Prime Minister of United Kingdom.

A leader, as opposed to a mere manager, is capable of forming a long-term vision and to get other people to support them, particularly by setting a personal example.  Unfortunately, in the current atmosphere, there are many successful political clowns and even hard psychopaths, such as Donald Trump. 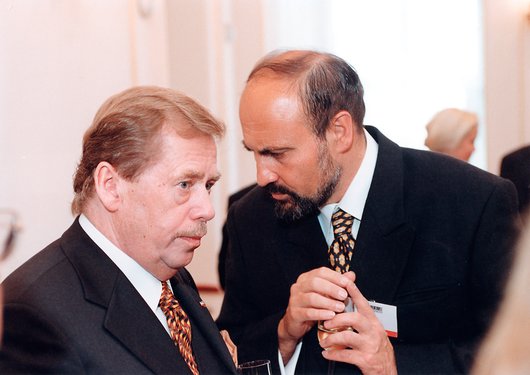 Expanding on my previous question and you personally, how do you find the saying “no one is a Prophet in his own land”? Do you feel sad about the difference how accepted you are abroad and the kind of derogatory debate you face in the Czech Republic? Why Czechs do not value their elites sufficiently?

Yes, I feel sorry that instead of a substantial debate I have to face personal attacks and slander, prejudice, stupidity and hatred, especially in the anonymous environment of social networks. I feel sorrow when I imagine in what kind of a moral and spiritual world these people live so they are able to write such things. My father, a literary historian and a publisher of Karel Čapek’s files, once showed me a basket full of anonymous letters that Karel Čapek received prior to the World War II. And it was the very raid of the rabble that chased him to death. That style is quite similar to the style I receive from Czech anonymous writers. The hatred against intellectuals and critically thinking people is very much encouraged by president Zeman who knows that majority of educated people would not vote for him, so he constantly insults them, he calls them “coffee-house idlers” etc., uses feelings of inferiority and the worst there is in the society and human sub-consciousness. I did not agree with Václav Klaus and I do not agree with him almost on any issue, but at least, I feel that he truly believed in whatever he said.  With Mr. Zeman I feel that he says whatever will bring him votes and power.

I cannot judge to what extent such dirt is present in other countries, but based on the success of nationalists in Poland, Slovakia and Hungary, and the extent of support to Donald Trump in the USA, I believe that the Czech Republic is no exception. The growth of populism and demagogy in Europe is not less disconcerting to me as the growing number of refugees, jihad terrorism and dangerous imperial ambitions of the Putin’s regime. And just to add – I truly do not underestimate particularly Putin’s aim to control former Soviet satellites.

I am in touch with numerous entrepreneurs in our country who understand that economic and political democracy depends on moral climate in society and such cultural biosphere depends on the courage of leading personalities to “sail against the tide” and to represent values through personal examples. If these are lacking, human society changes into an uninhabitable jungle. Relying on the “invisible market hand” causes the invisible corruption hand. We need reliable people who understand that “man shall not live on bread alone” and who are willing everyday to fight for the benefit of the whole society, bear responsibilities for the culture of interpersonal relationships without which no free society is conceivable.