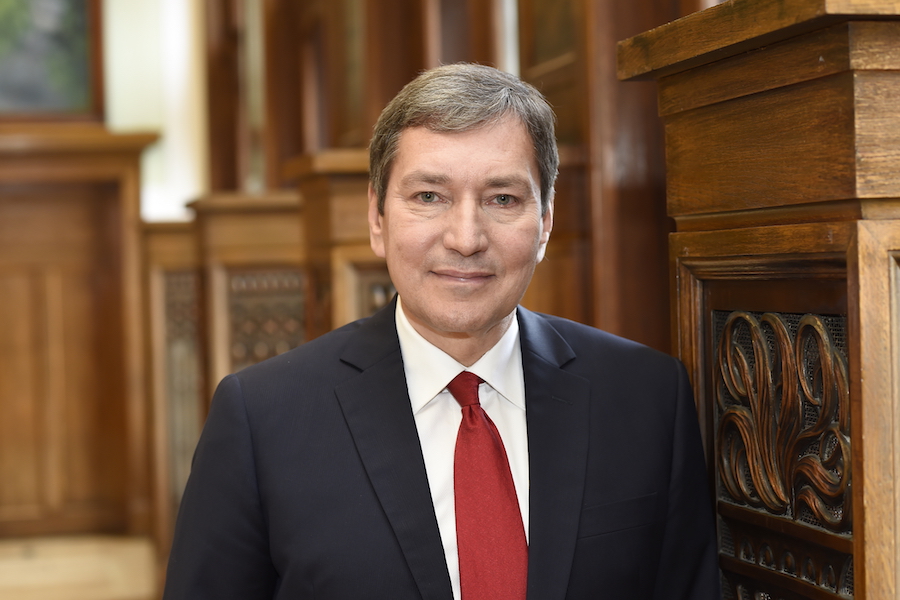 Tomáš Hüner has held the role of Minister of Industry and Trade since December 2017. It is said that his agenda makes him one of the busiest ministers. We are pleased he was able to find the time for an interview for Czech and Slovak Leaders readers. He has spent most of his career in the energy sector. He has worked both for the government (he was Deputy Minister of Industry and Trade between 2006 and 2011) and in the private sector (for ČEZ and Siemens).

You have recently returned to the debate on the need to complete new nuclear units, whether in Dukovany or Temelín nuclear power plants. The SingularityU Conference took place in Prague at the start of March where there was discussion of disruptive trends in the energy sector amongst other topics. Should the Czech Republic not choose a different way of thinking about energy production, particularly with regard to the falling price of electricity?

You always have to take account of the natural potential in a particular country. In the Czech Republic, wind and solar energy have limits; to put it simply, we don’t have as many sunny days and it is less windy than Germany, for example. And the potential energy from water is almost entirely used up here, in contrast to Austria for example where over 75 % of electricity for their own consumption is produced in this manner. We are also running out of fossil fuel reserves. So if we don’t want to import electricity, we’re going to have to construct additional nuclear units at Temelín and Dukovany. Nuclear energy is stable in the long term, safe and emission-free, both for electricity and partially for heat too.

The Czech economy is very open and so dependent on exports. Are you worried about a potential new trade war between the USA, Europe and China?

Any kind of trade war is dangerous for the local economy, for which export is fundamental. Although in terms of direct trade, our most important partners are our geographical neighbours and the other European Union member states, everything is interdependent in the globalised world. We export parts for industrial machinery, cars and electronics, for example, which after being fitted to the final products may end up outside the European market. And many of our other exports are not designed for immediate consumption or use, and it is a fact that markets have to move for the economy to work. The only solution to overcapacity of the currently often mentioned steel, but also other materials and also intellectual property rights protection, is clearly co-operation. Any unilateral measures are unfortunate and will not bring anybody any benefits in the long term.

There are many parties challenging the Czech Republic’s membership of the EU. Are you planning any “public awareness campaign” explaining the benefits of membership?

We deal with specific areas of the EU at the Ministry of Industry and Trade every day. We do so in co-operation with businesses, trades unions and associations. The results, European projects, whether they are services, events or buildings, can be seen and these are undoubtedly the best campaign on the benefits of membership of the European Union. Of the events, I could mention, for example, the conference “Internal Services Market: Yesterday, Today and Tomorrow”, which we are planning for 8 June this year for the occasion of the 25th anniversary of the EU’s internal market. This conference will evaluate the provision of services before joining the European Union and demonstrate the advantages of the internal market. Elżbieta Bieńkowska, the Commissioner for the Internal Market, Industry, Entrepreneurship and SMEs, will be coming to the event. Furthermore, there is a single contact point where you can get information on doing business in services in the European Union free of charge. Europeans can also take advantage of SOLVIT, which gives free-of-charge help to citizens and entrepreneurs in dealing with disputes with authorities in a different European Union member state if there has been an erroneous application of European law. There is also the ProCoP service, whom you can contact with questions on marketing products. We are also preparing to launch the Single Digital Gateway. The MIT is one of the instigators of this service which will provide all information and assistance services to EU citizens at one electronic address, thus contributing to facilitating movement in the European internal market.

Labour shortage is an acute problem of the Czech economy. What solution are you offering, and to what timescale?

Amongst other measures, the Ministry of Industry and Trade is behind the economic migration projects entitled “Specialist Treatment Regime for Qualified Workers” and “Special Procedures for Highly Qualified Employees from Ukraine”. These aim to allow the entry of qualified workers from abroad. The most well-known and also the most exploited are the measures focused on workers from Ukraine. This project aims to fill job vacancies with people from abroad if they cannot be filled within the Czech labour market. This January, the government decided that it would increase the annual quota for Ukraine by 10 000. In practice, this means that 19 600 workers from Ukraine will be able to apply for an employment card each year, a doubling of the current status, and almost twenty times higher compared to 2015. The Other States Regime, designed for employers, also applies to citizens of Mongolia and the Philippines. In this case, it applies to 1000 people a year from each country. The MIT will be making decisions on the applications from May on the basis of recommendations from Czech Business Representation and the CzechInvest Investment and Business Development Agency.

This year we’re celebrating the 100th anniversary of Czechoslovakia. How can we return Czech industry and trade to the fore? What is your vision?

The Czech Republic is one of the most industrial countries. Industry comprises about 32 % of our GDP, the highest of any country in the European Union. Roughly a third of revenues are generated by motor vehicle production, while the production of computers, electronic and optical devices, the production of machinery and electrical equipment and chemical industry production including pharmaceutical products also play an important role. As such, we don’t need to return Czech industry to the fore. What we do need to do is respond to the fourth industrial revolution, which is going to transform the world. That’s why I have set up the Industry 4.0 department at the MIT. With the effective use of modern technologies in production, our local economy – if we play our part in the principal changes – has a great opportunity to step beyond the role of subcontractor. Businesses must seize innovations early, invest in modernising production and all processes so they can exploit digitalisation and artificial intelligence as much and as effectively as possible. At the MIT, we are looking at three principal objectives: the ability of Czech companies to take part in the supply chain process, higher production efficiency – so production is faster, cheaper and saves resources, and the export of our own innovative solutions. We have so many clever people here, and in collaboration with universities, the Czech Academy of Science and other research facilities, we are able to come up with solutions such that we can sell not just patents and know-how, but also software and production lines. We also have to look at new business models, and also prepare for the impacts of digitalisation on the labour market and education. The state plays the largest role here. Digital transformation will change the nature of work tasks entirely. There will be more creativity, and less routine activities, which will be automated. The intensity of robot use in relation to the added value created in industry has increased sixfold in the Czech Republic, Slovenia, Slovakia and Hungary between 2005 and 2015. And this speed continues to accelerate. We need to go at the right speed and on the right wave. But we should bear in mind that it is not machines, but people, who write computer programmes.

You are one of the busiest ministers. What is your recipe for work-life balance?

With permission, I would refer you here to my wonderful wife. She would undoubtedly tell you in her curt Ostrava dialect that since I have become minister my life is far from in balance – in terms of those imaginary scales of work, family and hobbies. But I’m trying. Besides my family, my friends and even work colleagues also remind me of the need to live a life outside of work. I thank them all for their advice, and apologise that I don’t have the time right now. That’s what happens when you want to fully focus on work which is meaningful.