The legacy of Václav Havel and the Velvet Revolution remains relevant 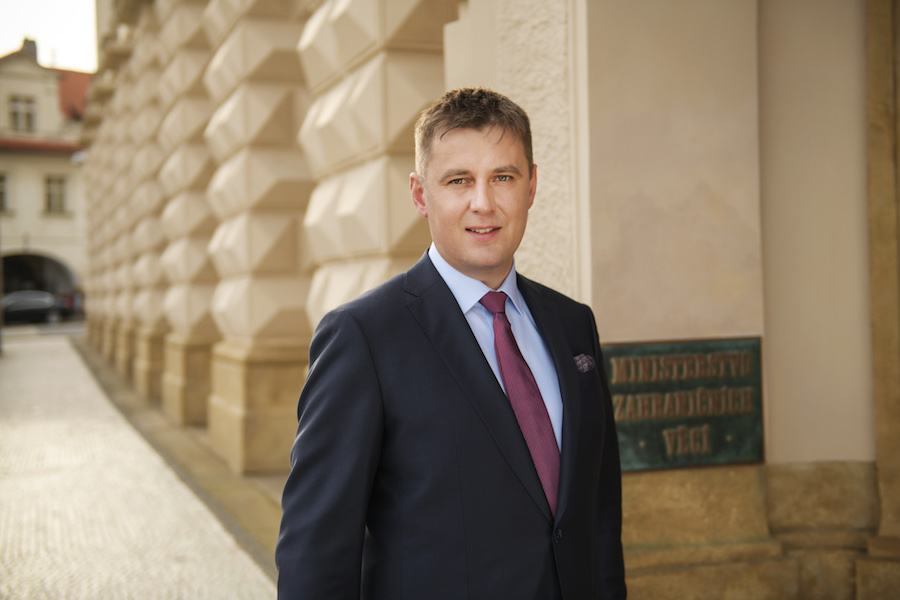 Tomáš Petříček, Minister of Foreign Affairs of the Czech Republic

Tomáš Petříček is part of a new generation of politicians who place particular focus on issues of the environment and human rights. He has been Minister of Foreign Affairs since October 2018. He previously held the role of Deputy Minister at the Ministry of Foreign Affairs, and held the same role at the Ministry of Labour and Social Affairs. He has been Deputy Chairman of the Czech Social Democratic Party since March 2019. His work experience encompasses both the Europe-wide level within the European Parliament, and the municipal level within the Prague City Administration. He studied at Charles University’s Faculty of Social Sciences, where his doctoral thesis was entitled “The Prospects of Energy Security for the European Union”. He completed degrees abroad at Brussels’ Centre Européen de Recherches Internationales et Stratégiques and at the University of Warwick.

What are Czech diplomacy’s challenges 30 years after the Velvet Revolution? In 1989 our society was far more united. We were sure that we wanted democracy and that we wanted to rejoin the West. Today, it is not just Czech society that is far more polarised and fragmented.

I am convinced that even 30 years after the Velvet Revolution, its legacy remains relevant, and the values we stood for remain a guide to our foreign policy. Czech diplomacy continues to advocate for these values, which include defending democracy, defending the rule of law and defending human rights. We do so both in bilateral relations and through membership of international organisations. At the same time, we can all see how the world around us is changing and becoming more complex. The 1990s were a lot simpler in many regards. Today, information is often available to us through the internet much more quickly than through the official channels, from embassies to Prague. It is much more difficult to get a handle on the large amount of information we receive. On the other hand, one of the jobs of the diplomatic service is to provide detailed information on events around the world, including possible risks. We are facing new challenges, hybrid threats and cyberattacks alongside challenges relating to global warming, and Czech diplomacy is going to have to pay greater attention to these challenges. Along with traditional diplomacy, an ever greater role is being played by tools such as development and humanitarian aid. Because society is divided, it is important that Czech diplomacy explain to the Czech public what its objectives are, what specific steps we are making, and generally strengthen the area known as public diplomacy. Today, foreign policies cannot be pursued without public support.

Recently, a new slogan was launched, presenting the Czech Republic as “The Country for the Future”.

I firmly believe that we are the country for the future. It is my conviction that the Czech Republic has a lot to offer in the field of innovation. We can be proud that we have so many talented scientists and cutting-edge research institutes. We are world leaders in emerging sectors – e.g. in nanotechnology, artificial intelligence and energy. The EU Beamlines Centre in Dolní Břežany is unique in the world. So our strategy of presenting the Czech Republic as an innovation leader is the right one. We need the clear vision that the strategy provides. On the other hand, I wouldn’t want us to see the Czech Republic merely through the lens of innovation, thus neglecting the importance of the artists, doctors and athletes who help us to enhance our reputation abroad. Recently, I awarded the Gratias Agit Award, given for the promotion of the good name of the Czech Republic abroad, to renowned plastic surgeon Bohdan Pomahač and others. Since I started here, I have endeavoured to engage important figures in Czech public life in helping to present the Czech Republic abroad in an informal way, thus demonstrating that the Czech Republic has a lot to offer. We reached out to rock climber Adam Ondra and YouTuber Karel Kovář, known as Kovy, who took part in the UN’s ECOSOC Youth Forum. Last but not least, we should not forget the wonderful Czech countryside. Quite rightly, tourist interest in the Czech Republic continues to grow each year.

My next question also relates to building the Czech Republic brand. In 2006, I was on a commission receiving new students at the Diplomatic Academy. We were very careful at that time that candidates spoke of the Czech Republic as a medium-sized country. Discourse has now shifted, and we hear from many politicians that we are a small country. So what size are we?

It is my conviction that we are a medium-sized country. We mustn’t underestimate ourselves. We are the same size as Portugal and Belgium, and we’re bigger than Norway and Sweden, countries considered diplomatic powers. Our stature is perceived in a wide range of fields, such as human rights, where Václav Havel’s legacy remains alive and we can even set the tone in the global debate. Since the fall of communism, we still haven’t overcome our tendency to put ourselves down. We have it within ourselves to make a mark on the world; we just need to want to do so and to do something about it. In foreign policy, my goal is for us to promote ourselves as a self-confident country, clear about what it wants and knowing how to get it. At the same time, we should remain realistic. Excessive expectations often lead to frustration. We are not China, but we can deal with China with self-confidence.

Your bold entry into politics has enhanced the difference in the new generation of politicians, who emphasise new fields, such as environmental and human rights. How are you doing in pursuing these fields?

We have things to build on. In human rights, on the legacy of Václav Havel, and in protecting the environment and climate change, on the legacy of our first Environment Minister, Josef Vavroušek, who was tragically killed in an avalanche in the Tatra Mountains. These fields span the generations, and climate protection also spans the political spectrum. Finding allies isn’t entirely difficult, but nor is it entirely easy. I’m glad we have a vibrant civic society that offers a helping hand to politicians.

What are the current trends in diplomacy? You’ve mentioned humanitarian diploma- cy, we still talk about strengthening trade diplomacy, and the Czech Republic also has three science diplomats in the United States of America, Israel and Taiwan.

I’ve already spoken about the importance of public diplomacy. Regarding new trends, a parallel with medicine comes to mind, in which we always know that we need to focus on preventing new problems. Within diplomacy, we focus on the issue of mediation. Even human rights, as previously mentioned, should be perceived as a part of prevention, in that non-observance of human rights can result in problems with far-reaching consequences. By taking a comprehensive approach, we aim to intercept problems at an early stage when they are easier to manage, and this is why we need to focus on the causes of problems, not just their manifestations. The migrant crisis has shown that the situation in regards to Africa has been long underrated. If we do not secure economic and social stability in the Sahel region, then we are going to feel the effects in the form of increasing migration flows to Europe. That’s why I am advocating that we take a more active approach in this region. A more comprehensive approach also includes more intensive co-operation with other departments. The Ministry of the Interior is involved in our projects, supporting our civilian mission within the EU, as is the Ministry of Defence through the presence of our soldiers in Mali, where we want to continue by strengthening our diplomatic presence. The tools of humanitarian and development co- operation aim to strengthen local involvement in solving problems. We advocated strongly in this field through the presidency of ECOSOC (the United Nations Economic and Social Council), and it is also one of the so-called Sustainable Development Goals. In terms of European policy, we need to realise that this is no longer purely a matter of diplomacy. The links between different countries within the European Union, and the linking of different fields within European institutions, has led to a situation where diplomats co-operate directly with people in other departments, with European policy becoming a lot more similar to domestic policy than to international policy. For a long time now, European policy has not been a matter of foreign policy, but rather a part of domestic policy, involving the whole of public administration, including regional authorities, as well as wider civil society through consultations, and finally business. Today there is no major sector that does not have a home and representation in Brussels and that does not deal directly with European institutions. Thus, the Ministry of Foreign Affairs remains responsible for foreign relations and co-operation within development policy.

You are father to two small children, and your wife is very active in supporting women. How do you manage to reconcile your work and family life? Is workaholism part of politics?

Reconciling work and family life requires a certain amount of discipline, and I must admit that I don’t always manage it. Politics, especially foreign policy, requires being on the alert 24 hours a day, 7 days a week. Global problems don’t usually take weekends off; world events don’t ask whether you’re planning a trip to the zoo. I’ve got used to it, and I went into politics knowing this was the case. This is in contrast to my wife, who would like to go to the Krkonoše Mountains, including places where there is no mobile phone signal. I always try to reserve a part of the weekend to be with my family. Like most Czechs, I enjoy going to our cottage, where I cut the grass, paint the fence and relax. Either I clear my mind of thoughts, or in contrast I think about things that I don’t have time for in my hectic daily life.

What is your final message for Czech and Slovak Leaders readers? I suppose this will relate to the summer and travelling …

I’ll begin by wishing readers a wonderful summer and relaxing holiday. Ideally without having to seek out our consular employees. Read our Travel Rules, which also involve registration in the DROZD travellers’ database, a project involving voluntary registration of Czech citizens travelling abroad, allowing for the effective organisation of help for Czech citizens in the event of natural disasters or social unrest. In the event of an unexpected situation, we are available to Czech citizens. In summer, we boost the presence of consular employees in tourist destinations such as Spain, Croatia and Bulgaria. Unfortunately, holidays can also reveal a dark side. I would call on citizens to act responsibly and not overestimate their abilities. Czechs have a reputation in the world for being frivolous adventurers. We underestimate risks and overestimate our abilities. Even on holiday, we need to follow basic rules and act on common sense. Czechs have a bit of a reputation of being too easygoing adventurers. Do not go walking in the Tatra Mountains in flip-flops, and when at sea it is a good idea to take shelter from the midday sun… So once again, I wish you a great holiday!