“We have had TOO MANY Le Pens and NO Macron”

TOMÁŠ PROUZA, PRESIDENT OF THE CZECH CONFEDERATION OF COMMERCE AND TOURISM AND VICEPRESIDENT OF EUROCOMMERCE

Tomáš Prouza graduated in economics, diplomacy and journalism. As a journalist, he founded the largest financial server Penize.cz. In 2004-2006, he was a Deputy Minister of Finance, responsible for fiscal policy, financial services, European and foreign relations. At that time, he was also responsible for Euro introduction in the Czech Republic. After his engagement at the Ministry of Finance of the Czech Republic, he worked in the banking sector and as an expert of the World Bank. From February 2014 to March 2017, he was the State Secretary for the EU, while also holding the position of coordinator of the digital agenda of the Czech Republic. In 2016, he was awarded the highest French state award – the Order of the Legion of Honour – for his tireless work in favour of the European project. He has been President of the Czech Confederation of Commerce and Tourism since October 2018, and in 2019 he was elected to the Board of Directors of EuroCommerce as one of its Vice Presidents.

Your confederation represents big retail and wholesale companies as well as SMEs in the Horeca sector. While some are doing quite well these days, the others are very much suffering from the COVID-19 crisis. What measures should be taken in order to save tourism?

It’s not only tourism that needs saving. After a slight jump of about 4% in food sales in March due to stockpiling, April has already seen a drop compared to April 2019, not to mention plummeting revenues of non-food retailers as high as minus 81% of clothing retailers. Restaurants also keep fighting significantly lower revenues even though many managed to jump on the home delivery train rather quickly. And it seems that even after the restaurants are officially open again, many Czechs still stick to delivery. The hotel industry has seen the hardest hit as the borders closed and the domestic travel has not picked up yet. The favorite tourism hotspots for Czechs will do well enough in the summer but destinations dependent on foreigners are currently seeing booking rates of 2-18% for the summer. There are two seemingly simple things that could be done to stimulate demand and save the tourism sector – build confidence and have smart government. How can you convince people to spend on summer holidays when the government keep saying a next covid wave is coming? Several countries have introduced vouchers as a financial incentive for their citizens to travel – while the Czech government paid only lip service to such a simple and fiscally effective incentive to jumpstart domestic tourism while negotiating a travel corridor for Czechs to Croatia, a favorite summer destination.

What can be done at EU level?

First of all, we need coordinated border opening, both for the internal and external borders. We should also look for ways to make travel to the EU easier for people from third countries that need visas. Secondly, the European Commission should push preparation for a possible next wave (or another pandemic) – we should understand what worked and what was unnecessary. Was it really necessary to close down shops or would face masks be enough? Was it really helpful to close even internal borders or was it rather a political gimmick for domestic audiences? And thirdly, the Commission must quickly and decisively put down its foot on all the new protectionist measures member states have dreamed up in the last three months.

Is there anything appealing for retailers and Horeca sector in the new MFF and EU recovery instrument?

Anything that will help restore people’s confidence is appealing – and the recovery plan seems to be on track to target the most important areas. However, we see some member states jumping on the “Us first” bandwagon, failing to see that there is no prosperity if some member states are left without help. More specifically in the context of the Czech Republic with its low unemployment and healthy public finances I appreciate the push for green investments and modernization of the European economy. My country is the most industrialized EU economy and the push for its greening will be painful in the short term – but it would be stupid to undergo the pain now when there is (financial) help available. If we postpone the changes, they will hurt more later and endanger our industry that will no longer be competitive. 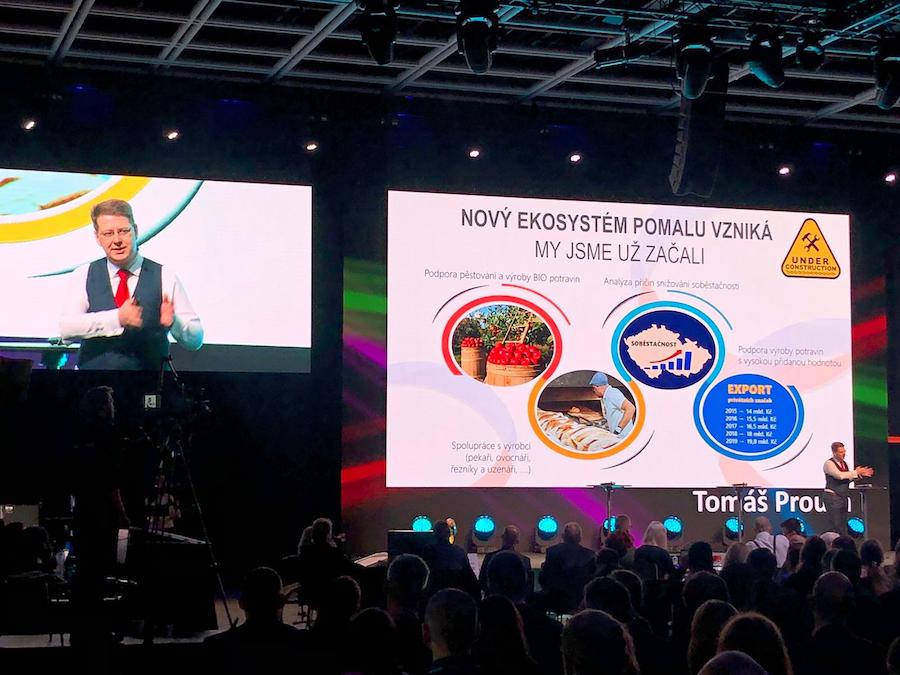 The crisis pushed many shops to go online overnight. Do you have any fresh numbers for the Czech Republic in this respect?

Czechs always loved shopping online and have been among European e-commerce leaders even before the crisis. The last three months have seen further significant e-commerce inroads not only among retailers but also for restaurants or for the online sale of tickets for tourist attractions. Retail sales in April, the first full lockdown month, dropped by 11% while the online sales grew by 48%! Food delivery services have seen year-on-year increases of over 100. More importantly, e-commerce and digitalization have finally become the priority throughout the economy. Projects that would take a year or more for corporations to plan, approve and roll out have been completed in days or a few weeks. And if the corporations manage to keep this flexible approach, we will see more and more e-commerce services very soon, partly driven by changed consumer behavior as shoppers now prefer to avoid physical shopping or at least limit their store visits to a minimum.

In some countries, such as France or Belgium, people preferred organic and local food during the lockdown, even though these articles are a bit more expensive than others. Did you record the same trend in the Czech Republic?

We definitely did, especially as schools were closed and many families had to cook lunches at home seven days a week. It has focused their attention on what they eat. And all the discussions about risk factors such as obesity focused people’s attention to their eating habits hopefully more effectively than the usual New Year’s resolutions.

What is the driving force of the Czech government to set up the mandatory introduction of 85 % of Czech food in stores when people are not ready to pay more?

This proposal, heavily lobbied by the largest domestic agricultural and food production conglomerates, had a simple goal – give the current government a pretext for increasing domestic agricultural subsidies. They know that the Commission would have to step in and sue the Czech Republic for breaching the single market rules – but it would take time and once the subsidies are paid out they will never be recollected. The government already tested this plan in late March when it sent over 166 mil. euro (4.3 bln CZK) to the largest agricultural and food producing groups to support self- sufficiency as an anti-pandemic measure.

What kind of alternative measures could be taken to incentive people to buy local food?

First of all, it must be competitive. People are willing to pay more for truly local food as very successful farmers markets throughout the country show. They are willing to pay more for bio quality or “food with a story”. But food produced by large Czech food producers must be competitive with imported products – and it often isn’t. It is cheaper to import German butter, Dutch cheese, meet from Poland, etc. So it would make sense to focus on two areas: support the local producers to improve the volume of their production. And help the larger farmers and food producers to become competitive.

Is the dual quality still a problem?

Not really – many producers changed their recipes to avoid the problem. Most large retailers have been pushing for this change, demanding guarantees from the international producers that they do not split the European single market into areas of different quality. We have also managed to work with the European Commission on these territorial supply constraints and the internal market and competition units of the Commission take these attempts of large producers to divide the EU market to unfairly profit from the lack of competition very seriously.

How do you perceive the new farm to fork strategy?

I really like the idea and it hits many targets very well. But as with anything negotiated by the member states we will see watering down the proposals as some of the reforms would be very painful. However, Europe has always been the leader in food safety and food quality – and we should find courage to push further, especially as we see the impact of bad eating habits on the health of too many Europeans.

You are a tireless supporter of the euro and EU integration which is pretty logic for someone coming from an open mid-size economy oriented to exports, placed in the heart of Europe. How can you explain the negative perception of Europe by Czechs who are benefiting so much from their EU membership?

The Czech Republic has been among the top countries profiting from European integration and will continue to profit significantly even after we become a net payer into the EU budget. And we should be proud we managed to move from the recipient group of countries into the group of the richer countries. However, we always had an abundance of EU-bashing senior politicians and nobody courageous enough to defend Europe. In other words, we have had too many Le Pens and no Macron.