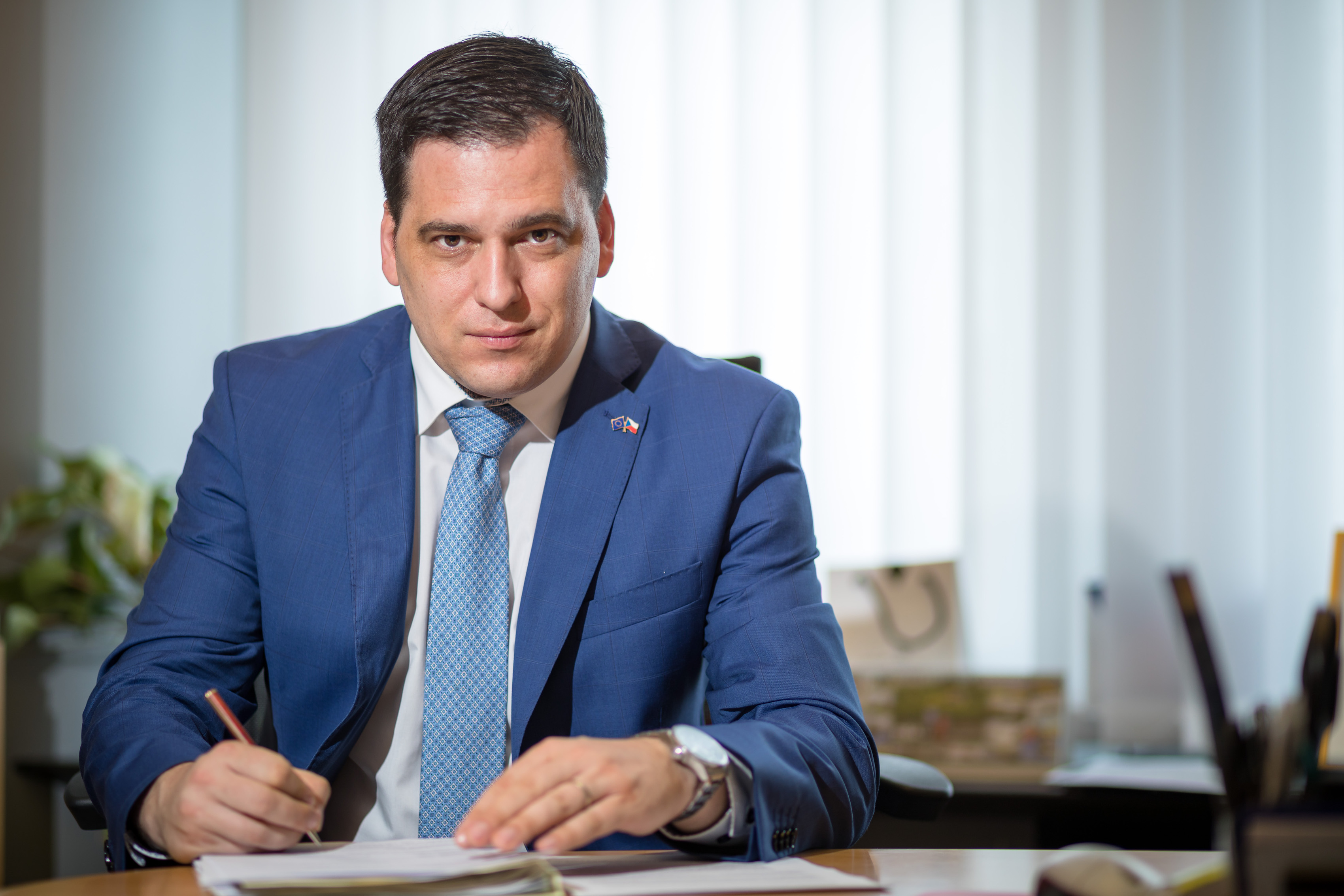 I met Tomáš Zdechovský in 2012 when he was still working as an entrepreneur and crisis manager. Even then, the issue of Europe, its reform and future direction was close to his heart. He’s been a MEP since 2014. He is regularly ranked as one of the most important Czechs in Brussels, and is one of the hardest working MEPs. He is married with four children.

KDU-ČSL proposed celebrating 15 years in the EU with the “Week without the EU” event in order that people realise our priority should be to try to reform the EU, and not to leave the EU. Your idea was to “implement checks at borders, return goods certificates and prevent orders being made on the internet, reintroduce mobile roaming charges and authorise visas to Slovakia. It also involved limiting higher education grants and Erasmus programmes, ceasing motorway construction and sending all employees of foreign companies on a week’s unpaid leave.” It seems to me that by stressing pragmatic benefits, the idea of peace and European belonging has been lost.

That idea was mostly a bit of provocation designed for those who think we’d be better off without the EU. Whenever I hear the arguments of most “Czexiteers”, I just think that all it would take would be a week and they’d quickly sober up because they’d realise the things they take absolutely for granted are not at all a given. Something like peace is too abstract for these people, and furthermore many of them are convinced that because of the EU we are in a kind of cultural war, and a war with migrants, liberals and so on. That’s why I try to utilise something they can picture better – and that’s these various restrictions, price increases, and lack of goods and labour.

Ideas such as European belonging are entirely beyond their understanding, perhaps because they have become aware of the different quality of food in countries to our west, with the idea promoted of the Czech Republic being the dustbin of Europe, alongside our lower salaries, meaning that we are merely Europe’s “cheap assembly plant”. As politicians, however, we are to blame for these ideas, because we have used exactly these arguments in stating that we want to solve such problems. But that doesn’t happen from one day to the next, and it just leads people to become frustrated, and ideas such as “European belonging” just add fuel to the fire.

In less than a month, the European Parliament elections take place. Czech voters are not particularly engaged in this type of election. In 2014, we had the second lowest turnout in them. What topics do you consider fundamental for Czech voters?

Security is foremost, and even though the migrant crisis has settled down significantly, numerous fears persist because people see problems with integrating foreigners in France, Germany, Sweden and other countries. Following this is reform, because more and more people are realising that our position in the centre of Europe, and the fact we are a small country with one of the most open economies in the world, means we’ve got to remain in the EU. But they don’t like its current overly left-wing orientation and are seeking alternatives. And then they need to feel the assurance someone has their back; to hear that someone “far away in Brussels somewhere” is sticking up for Czech citizens, companies and interests.

You yourself are a proponent of EU reform, not leaving the EU. How do you see this EU reform specifically, and can the Czech Republic as a small country have any influence on such reform?

For me, it is absolutely essential that we sit down and start discussing where we want the EU to be in 2030, and to posit the question of whether we will achieve this if we continue down the path we have set for ourselves. The EU is now inflexible in many regards, and approaches many things in a very left-wing way because its main tools are regulations and quotas. Another problem is that it takes an ideological position in many areas, not a rational one, with facts the last thing it takes account of, and this can be seen, for example, in the issue of emissions and its poorly thought- through support for electric cars. Furthermore, the Commission is unable to respond appropriately to unforeseen events, as was seen, for example, in its responses to Brexit and the migrant crisis. They look for errors everywhere except in their own actions, communication, and excessive push for certain phrases and political correctness.

In this regard, one can only hope that the next Parliament and Commission will be more conservative and right-wing in focus. The EU’s original objective was the free movement of people, goods and services. This has been achieved, so the question is why do we continue to produce more and more proposals? Personally, I would make major changes to various European agencies and institutions, because by abolishing the feminist committee FEMN and other agencies and groupings promoting gender equality, and leaving only a social committee with these subtopics, for example, we can also change the EU’s values focus…

Migration remains a bogeyman for Czechs; this is an area you specialise in. So how can the EU provide assistance in regard to migration, when the allocation of quotas was such a fiasco?

Quotas were a bad solution primarily because they did not reflect peoples’ free will. It was assumed that the migrants would be satisfied anywhere in the EU and would not look at whether there was a larger national community elsewhere, etc. Yet the EU can help at the sites where refugees are, such as by improving the conditions in refugee camps (e.g. by providing schools for kids, etc.), so that they can wait out the crisis period as close as possible to their home country without having to go further to Europe. The EU can help by providing structural restoration of their countries, or overall development so that people are motivated to remain in their home country because they can find work and generally good living conditions there. Morocco is a good example here, where a number of projects have been successfully implemented to improve their health service, food and technology self-sufficiency, etc. The EU can also be a mediator in various disputes. It provided help in this manner in setting up the Libyan coast guard, managing through a common goal to more or less stabilise relations between a few dozen fractious political groupings.

I’m not saying the situation is ideal, but it certainly helped to quell illegal migration to the EU across the Mediterranean Sea.
The EU can also set up a more effective asylum system. Holland can serve as inspiration here, with the entire admission process including return or appeal completed within 6 weeks. The fact that various security databases are linked up helps here, with the police getting the data they need very quickly. Thus, those who really need asylum get it, and there is better control over who we can still manage to integrate.

Simply put, there are more solutions than merely giving everyone the right to migrate anywhere.

You’ve been described as one of the 50 most influential Czechs in Brussels. What specific interests of Czech voters have you managed to represent?

Personally, I see three areas. The first I have called helping Czech citizens and companies, the second is support for the government’s long-term positions, and the third is promoting and dealing with larger areas that trouble most citizens, or where there is a structural problem.

In order for a MEP to be able to help Czech citizens and companies, you really need to travel to the regions to meet people face-to-face and visit companies. I have therefore never made the excuse that MEP’s work is just to prepare legislation; I have approached the temporary role I have attained as a service to the people, and gone the extra mile. If you put my name into Google or visit www.zdechovsky.eu, you’ll find out that I have helped dozens of people, companies and non-profit organisations during my term. Not all these cases are as well-known as the story of Mrs. Michaláková’s, whose son was taken away from her in Norway, or the case of the unfairly sanctioned drivers in France; they generally came to an early and positive end, and so not much is known about them; you’re more likely to remember “tough battles” than a single happy ending.

I include amongst my support for government positions, for example, active resistance to the nonsensical refugee quotas, opposition to gun control regulations, providing significant help to negotiating EIA exceptions so that the Czech Republic can build new motorways using European grants, and support for Israel. These were all in the interests of the Czech Republic, and I provided great support to our government in these areas. In the third area, I would include, for example, the battle against the double standards in food quality, and also aid for the depopulating regions of Broumov and Želivka. I would also include here the fight against a number of frauds, where I have endeavoured to measure everyone with the same yardstick within the inspection committee, whether in regard to Mr. Juncker’s Selmayrgate, the Czech “holding companies” case or the misuse of grants in Slovakia, where I undertook a number of inspection missions following the murder of Ján Kuciak.

This interview is also available in Czech. Just click here.