“The Czech countryside has charmed me” 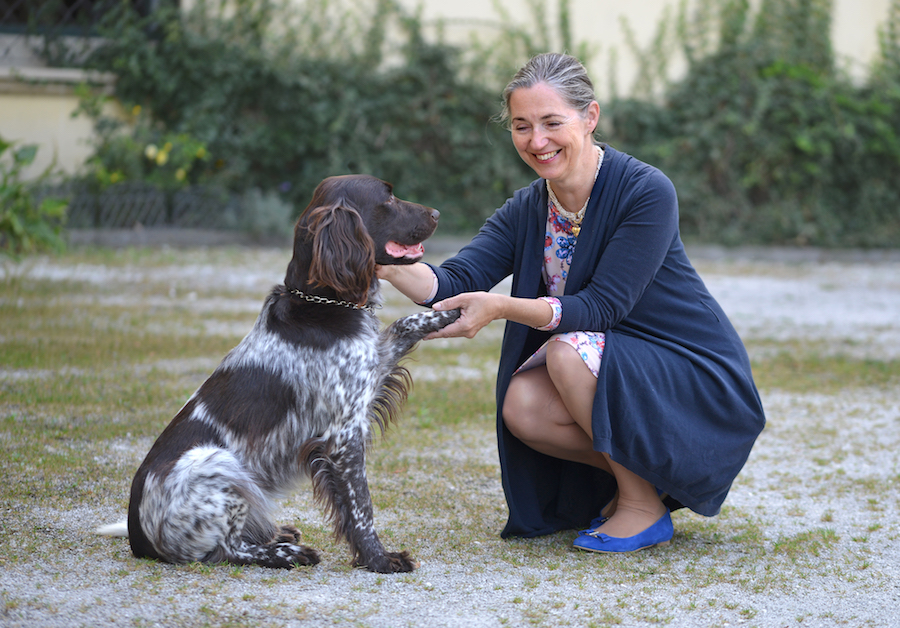 Imagine you receive a call from an unknown number and you hear: “Hello, Czerninová speaking. Aunt Lobkowicz told me you’d like to do an interview with me. When would suit you?”

Our series on noble families has rightly aroused a great response from readers. However, it isn’t always easy to make contact with protagonists. As such, after my interview with Elisabeth Lobkowicz I asked her for help in making contact with other suitable candidates. I was surprised how quickly specific acts followed on from words. Although the story of her husband Tomáš Czernin, forester, farmer, owner of the Dymokury Castle and last but not least politician is a well-known one in the media, I am much more interested in Mrs Czerninová’s story, a woman who came from Vienna not to Prague, but to Dymokury. Mrs Czerninová gave me the option of meeting either in Dymokury where she lives, or in Prague where she travels to work as Hospitaller for the Order of Malta’s Grand Priory of Bohemia. Ursula Czerninová, born Piringer, was born in Vienna and her studies included a time in Rome learning History with a focus on Early Modern History. Instead of researching ancient history in archives, however, fate led her to meet Tomáš Czernin shortly before the Velvet Revolution in 1989, and she had the opportunity to experience the real history of the end of the 20th century, and regime change in one of the countries of the former Eastern Bloc. She visited Czechoslovakia during the November events, and today she looks back nostalgically at her participation in the demonstrations, at the revolutionary spirit of the period and the wonderful feeling of hope and anticipated change at that time. As a practising Catholic, she has been involved in charity since her youth.

When we looked back at the events of autumn 1989, we both noted our disappointment at the results of the parliamentary elections last October, and the subsequent presidential elections in January.

The Czernins lived in Vienna for almost two years following their wedding, but in 1992 they returned to the Czech Republic and began looking after Dymokury Castle. I held the interview with Mrs Czerninová in Czech, as she has been living in this village in the Czech Republic for twenty-six years. The couple have four children, all of whom grew up in the Czech Republic, and their youngest son was born here. I spoke with Ursula Czerninová about life in the village, bringing up children and her charity activities within the Sovereign Military Order of Malta’s Grand Priory of Bohemia, where she holds the position of Hospitaller.

It depends on your perspective; for me the Austrian countryside is sometimes too sterile. The Czech countryside is more authentic. Life in the countryside is wonderful. I’m glad to have nature and peace and quiet around us. Thanks to their childhood in Dymokury, my children were also able to experience the freedom, perceive the changing seasons, and be in contact with animals.

When you came to the Czech Republic you didn’t speak Czech, yet you managed to set up a Ladies Club in Dymokury.

We called it the Ladies Club in jest. It started when two neighbours wanted to practise their German with me, and in exchange taught me Czech. We soon became friends.Books were a problem. At the time we only had the “socialist” language textbooks of the time available to us, in which the texts were full of expressions such as “comrade”, “tractor”, “farming co-operative” and so on.

You hold the position of Hospitaller in the Sovereign Military Order of Malta’s Grand Priory of Bohemia. What does this position actually involve?

I’m in charge of charity and social projects. Within the Order of Malta, the Minister of Social Affairs and Health form one whole. Maltézská pomoc, o.p.s. (Maltese Aid) looks after senior citizens, the disabled, children from disadvantaged families and the homeless. The Order runs three schools (the Higher Nursing School on Ječná street, Prague, a nine-year elementary school in Kladno, and an eight-year gymnasium (grammar) and vocational school in Skuteč). We also organise an annual pilgrimage to Lourdes, involving one plane with a total capacity of 189 full of the sick, pilgrims and those accompanying them. The Czech Maltese Youth club organises a summer camp every year for disabled young people, as well as trips and friendly get-togethers during the year. Before Christmas the now renowned advent punch sale is organised.

As Hospitaller, you’re in charge of aid for countries in Eastern Europe, so you’ve got a wider perspective. We’ve already spoken about our disappointment in politics in Czech society. What do you think Czechs are lacking?

I think we’re doing better than ever before from a material perspective. But I think people are often missing what’s important: good relations within the family, a healthy relationship to work, social sensitivity. We’ve sacrificed this to economic success. The fact that we often lack fulfilment in these basic matters leads to dissatisfaction, and Czechs moan about everyone and everything. But we’re doing well, we’re not missing anything. In the war-ravaged regions of Ukraine, for example, people really are doing badly there; there’s real misery there. Perhaps, however, in desperate need they can see more clearly what is important in life.

We used to get up at five in the morning; the kids’ train left at six. The kids went to Hradec Králové and there was no direct connection from Dymokury in the morning. The journey back was quicker. The kids went to elementary school in Dymokury, then the church school and gymnasium in Hradec Králové. Both our sons study forestry management, and according to the established tradition of noble families, we expect our oldest son to take on the land. Our eldest daughter is already married; she studied Law and works at the Ministry of Foreign Affairs. Our other daughter studies Music Science and Singing in Vienna. In terms of our property, we have endeavoured to instil in our kids that we are only the trustees of our property for the generations to come.

Many Czechs love Vienna. I myself remember my first visit behind the Iron Curtain, which was to Vienna. I still enjoy going to Vienna with my kids, to exhibitions, to the Opera and its famed balls. When you look back on the quarter century you’ve spent in the Czech Republic, have you missed life in Vienna?

I don’t miss Vienna; I can go there any time I like. There aren’t any borders any more.

I hope Mrs Czerninová is proven right and we remain borderless for a long time to come. On my last visit to Austria, we did encounter border control, if only briefly.

If you’re interested in finding out more about the Sovereign Order of Malta, you can find an interview with its former ambassador, H.E. Mario Quagliotti in our archives.