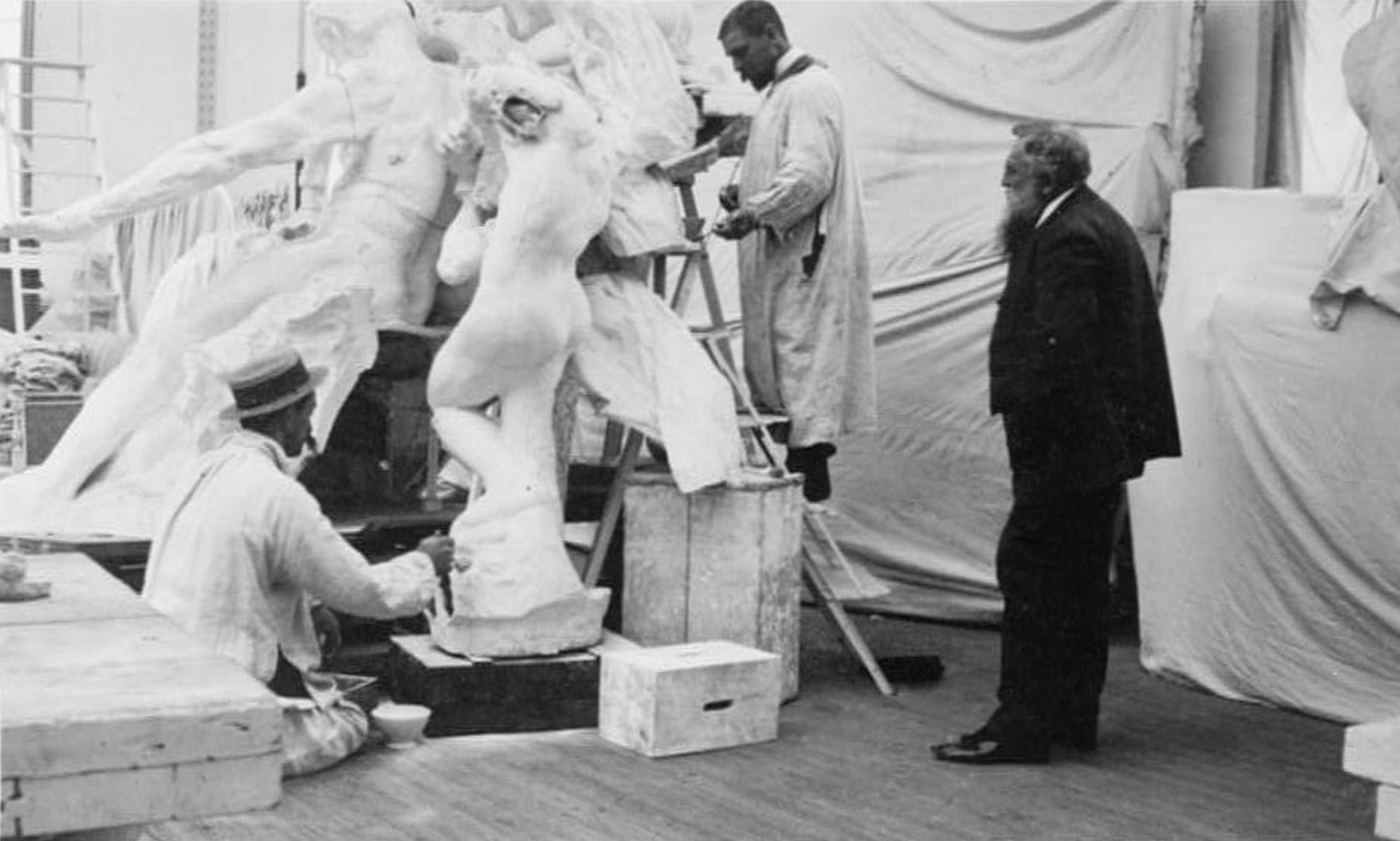 In November 2017, the art world is celebrating 100 years since the death of one of the greatest sculptors of the 19th Century, exhibitions of whose work can be visited the whole of this year around the world. Paris’s Grand Palais is currently holding a fascinatingly conceived exhibition of Rodin’s work, presented next to the works of many other sculptors, including contemporary sculptors, which have been influenced by his creations.

Rodin is considered a pioneer of modern sculpture, and as such during a period of smooth and aesthetic academic sculpture he was unable to get into Paris’s École des Beaux-Arts at 17 years of age despite being supported by his teachers, who were convinced of his huge talent. His impressionist and innovative expression perverted established mores and the traditional bourgeois perception of art.

Rodin’s works were innovative in particular in their approach to the sculptural surface and the use of surfaces to create effects of light and shadow. He named his method marcottage (layering). In his statues, he broke three-dimensional shape down into a dance of reflections and colours which result in an appearance similar to impressionist paintings. He considered the art of nature a source and inspiration for his work, in particular the human body which he considered the best means to express any state of mind. His artistic genius was in his concept of  animating statues by concentrating focus not just on the curves of the body, but also able to gift his sculptures with life force and freedom which influenced the development of a unique and previously unseen concept of sculpture. He preferred to work with amateur models, street performers, acrobats, strong men and dancers since as an artist he was fascinated by dance and spontaneous movement in general. Rodin’s liberal approach had a huge impact on subsequent developments in modern sculpture, although his interest in the figure was rooted in his admiration for Michelangelo. As such he did not stand opposed to the past, actually being inspired by it. Although he had no formal education, he became an inspiration to subsequent generations of sculptors.

Besides shapes his sculptures also express internal tension, dynamic feelings both of the artist and the themes portrayed, which Rodin always used to give his works a remarkable realism, thus celebrating the uniqueness of his figures.  He never wavered from his principles, despite criticism, and thus he created unique works portraying the inner self. 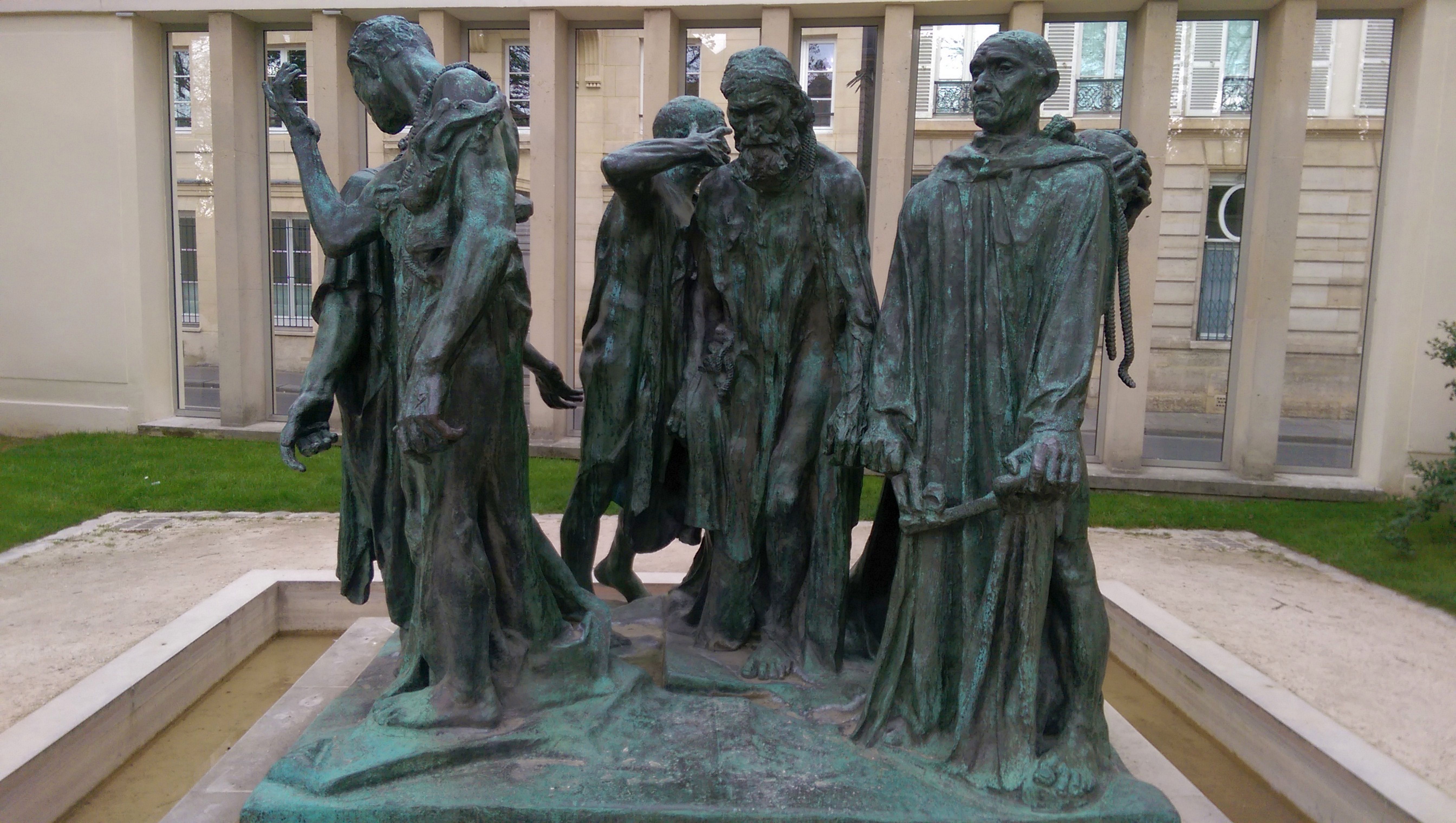 His statue The Age of Bronze stirred up great commotion at the Salon in Paris. Because it was so realistic, Rodin was accused of casting a living person instead of modelling the statue. The statue was a precise image of the Belgian soldier who was his life model. At the time, Rodin was 36 years old. Although many artists defended him, it took him almost ten years to clear his name. Nevertheless, his fame and reputation within the art world began to grow. His marble sculpture, The Kiss, was selected for the World’s Fair in Paris in 1900, where Rodin was given over a whole pavilion. Perhaps his most famous statue, The Thinker, was installed in front of the Panthéon in 1906. He undertook monumental sculptures in honour of Victor Hugo and Honoré de Balzac. He was commissioned to create his extensive work, The Gates of Hell, inspired by Dante’s Divine Comedy. He worked on this for 37 whole years, but he never completed it and today the sculpture is installed in the gardens of Biron Palace, where he worked for 10 years before his death and which is today a museum formed in his honour and containing his greatest works. Many of his monumental pieces have also been installed in the gardens of the Chateau de Meudon near Paris, which Rodin acquired at auction in 1895, and this is a place where his statues seem to impart their thoughts upon the viewer.

His close friends included Claude Monet and Paul Cézanne. He was admired by great figures such as Oscar Wilde, and writer Rainer Maria Rilke worked for him as a secretary for a year, and later wrote a fascinating monograph about him.

It is well known that Auguste Rodin did not like travelling. Thanks to Josef Mařatka, whom the famous French sculptor accepted into his studio and made him his assistant and a kind of secretary and interpreter, however, a miracle occurred. Following his repeated requests, Rodin took the train to faraway Prague to open an exhibition organised about him by the Mánes art society in spring 1902.

Rodin’s arrival in Prague in May 1902 was a great event. The sixty-one year old artist was welcomed by enthusiastic crowds and enjoyed an official reception at the town hall, and also a number of art banquets held in his honour. All this, and his exhibition in the pavilion under Kinský Garden is thoroughly mapped out, but little has been revealed about Rodin’s trip to visit Joža Uprka, a painter who put French impressionism in the service of Moravian folklore. Accompanying him were a number of artists including Alfons Mucha, whose Art Nouveau posters had conquered Europe.

After touring the Moravian Karst and Macocha, the excursion moved to Hodonín, where the guests enjoyed, besides a performance of Zeyer’s Radúz and Mahulena, also an exhibition of Moravian and Slovak artists in Besední dům. This was dominated by the pictures of Jože Uprka, who was one of the organisers. It seems Rodin was enthused and he went straight to visit Uprka in his home in Hroznová Lhota. Twelve carriages accompanied riders in folk costume on richly adorned horses from Rohatce, Strážnice and Vlčnov. Rodin felt like a king. The magazine Zlatá Praha reported on the event, publishing many photographs.

More recently, an auction took place of a marble statue (28 cm) of a lying Andromeda forgotten for 130 years.  In 1888, a Chilean diplomat at the time posted to Paris, ordered a bust of his wife Luisa. The sculpture enjoyed such success that the French state requested the bust. The diplomat granted France its wish, and in return Rodin gave him this marble statue of Andromeda. The statue remained with the diplomat for many years and was then passed down through the family. This May, the statue was put up for auction in Paris with an estimated price of 800 000 USD, and it was sold on 31 May 2017 for 4.1 million USD.

Rodin was not just a sculptor; as a young man he also painted oils and watercolours. The Musée Rodin has a collection of over seven thousand of his pencil, chalk and charcoal drawings, thirteen drypoints and his only work of lithography.

Rodin died on 17 November 1917 in his Villa des Brillants in Meudon. He was buried on 24 November in Meudon alongside his wife Rose. His grave is adorned with a stature of The Thinker.