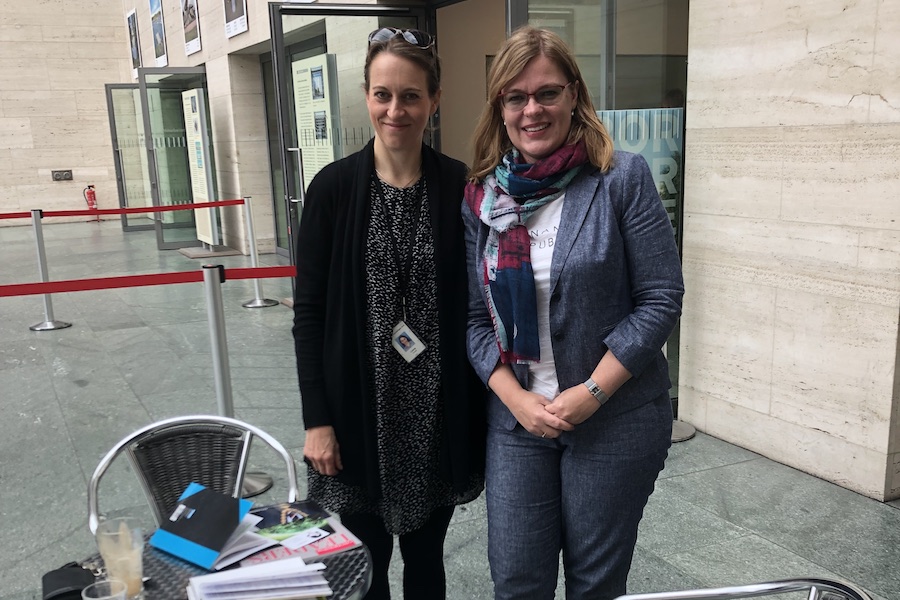 The Czech and Slovak Leaders Magazine, as a proud media regional partner, supported this unique global forum for female executives for the fourth consecutive year. Attending elite events regularly creates unreasonably high expectations that inevitably result in frustration. I was relieved that my visit to this year’s summit again proved to be the exception to the rule and I am already awaiting the 7th GFL 2020 with curiosity. I enjoy the unique nature of the summit, combining various speaking, learning and discussion formats, while allowing enough time for networking and enjoying some scenic attractions of Germany’s capital. I also enjoy the true diversity of the conference, both with regards to speakers representing more than 20 countries and participants, with more than 250 executives attending. The program element offers both stability and change. While some key issues, such as geopolitics, technologies and leadership remain on the agenda every year, new topics and perspectives are introduced to present new offerings that one would not expect at such an event.

This year’s summit title was “Collaborating to Build a Better World” and the three selected themes were geopolitics and trade, tech sphere and opportunities and human leadership in the age of disruption. Prominent speakers comprised of Cecilia Malmström, EU Commissioner for Trade, Katarina Barley, Federal Minister of Justice and Consumer Protection, at that time also a German Social Democratic Party leader for European Parliament elections and Rebecca Saxe, Professor at the McGovern Institute for Brain Research at Massachusetts Institute of Technology. Each year, the organizers strive to secure top-notch speakers who openly share their perspectives and insights from various spheres while also ensuring these speakers are not merely frequent conference speakers- travelers with the same presentation touring for many years, as it is the case of many events in the Czech Republic.
I want to share five perspectives as my main take-aways from GFL 2019. I do hope some of you will join me next time as I felt a bit lonely, as the only other participant representing the Czech Republic and Slovakia was the inspiring Tanja Vainio, who was one of the panelists discussing the new world, automated and powered by data.

EU perspective matters, so let us be aware, active and present!

Saying positive things about the EU in the Czech Republic does not make you popular, so that is why the positive justifications practically disappeared from the news. Cecilia Malmström reminded the audience that EU trade is open and characterized by transparency, inclusivity and focus on job creation. Did you know that 36 million jobs exist thanks to EU trade? More support for further growth, particularly of small and medium enterprises, is already on the way. As to promotion of inclusivity, many international agreements (such as between EU and Chile) contain special chapters promoting and safeguarding women and gender. Mrs. Malmström hopes that the cross-border cooperation will be further strengthened after the elections to European Parliament.
The fact that the East-West division did not end with the fall of the Berlin Wall was painfully presented in the speech of Dr. Katarina Barley, Federal Minister of Justice and Consumer Protection and a leader of the German SPD Party for the European Parliament Elections. As much as Dr. Barley underlined EU values of rule of law, democracy, freedom and diversity plus the ability to come up with a compromise, her constant criticism of Hungary and Poland (although in many ways substantiated) made me experience another East-West division that I would have not expected 30 years after the fall of the Berlin wall; I wish there had been more participants from the region together with me to object such a discourse.

Breaking the Silos: Why Real Leaders Should Care about Planetary Health

What is the link between the corporate and planetary health? It is much more subtle than you think. Did you go running this morning? If yes, did you appreciate the quality of the air you breathed? Dr. Nicole de Palua, CEO of Global Health Asia Institute made the argument that global warming is a risk to both human and planetary health. Many popular psychology articles advise staying away from toxic people. But what to do about living in a toxic world? Have you noticed the worsening trend of air pollution in big cities, London and Prague not being the exception? Being healthy by definition means much more than simply the opposite of being sick. Transdisciplinary approach and wide collaboration is needed in order to tackle the issue of planetary health. And where to start? Start taking your children to nature as much as you can. Once they experience nature, they will have the desire to understand it more and to protect it.

How many times have you set up an address into a navigation system to end up at the different place than intended? We all know that existing systems are not good enough, with both people and goods getting lost. Chris Sheldrick, founded the company what3 words, after he got frustrated with providing performers for private parties in hard to find locations and then having his performers arrive late or not show up at all due to being lost. Camilla Tylor, CFO presented the start-up that has divided our planet into grids, assigning each location a specific word, rather than a number. Three words, automatic generated combinations, can be used even in places without an address, as four billion of people currently live without an address. It was great to hear that the system has been successfully tested not only by Mercedes but also by health workers in the biggest slum of Durban where it helps to save lives of babies, as it helps emergency workers get to pregnant women faster. Go on the web and find out what your address looks like with the what3words system. Unlike two (or more streets) in a different city, each address is unique. On top of that these words are much easier to spell to any sound system, so that next time you arrive on time and to the venue you wanted (not the one that navigation understood).

The Five Most Important Technology Trends

Vuyiswa M’Cvabeni from SAP shared her story of her eight-year old son writing homework and wanting to ask Alexa for help, since “Alexa has an answer for everything”. She continued, “Technology is built into every single interaction, forcing companies to look for the next competitive edge to meet rising expectations.” Here are her five trends you should pay attention to.

1. Artificial intelligence that performs human like tasks can create up to six trillions USD of additional value. However, we need to decide first where it can be used and where it can’t be used.
2. Autonomous things that collaborate can complete tasks without human intervention. It is up to further research, big data and cloud technologies to ensure safety.
3. Blockchain and autonomous interactions brings us to the question of trust. The centralized trust model known today adds delays and friction costs to transactions. Blockchain can bring enormous value but while providing decentralized alternative trust mode.
4. Multi-cloud. I remember during the early stage of my writing career for our magazine the discussion about whether to go to cloud or not. Today, everything relies on the cloud and the good news for customers is that many cloud platforms are available to fit individual needs and to provide the best solutions.
5. Experience management
While customer centricity seems to be another buzzword, are we truly aware of how we can make systems truly beneficial and integrated for the customer?

Last but not least, let us be prepared for surprises. Vuyiswa ended with the quote from Douglas Adams who said that “technology is a word that describes something that does not work yet.”

I had to have a very good reason to leave my family on Mother’s Day to get to Berlin on time for the pre-summit session. “What is your passion?” asked Cynthia Coutu, the Founder and Manager of Delectabulles, A Champagne Networking Club for Women. It was actually her passion that helped her to establish own business, after she lost her job at the age of 50, after having spent many years working for a large international organization. The need for women to support each other in a male-dominated business such as wine- making by meeting, swapping knowledge truly promoting one another and banding together when facing difficulties, should be repeated again and again.
It was fascinating that leadership lessons were demonstrated using the background of the champagne making industry which, in fact, has many active women, yet not all their stories are known. Previously widows, nowadays often daughters, have had to take care of their husbands’ businesses, since the fields of Champagne had turned into battlefields twice in the last century. Cynthia makes sure both stories and brands get the attention they deserve. I was pleased to hear that more and more traditional houses are hiring women to the position of number two cellar master. This is the proof that diversity is not simply a plain word to be mocked or used by corporate social responsibility department, but a necessity for catering to all customers’ needs and thus prosperity in the 21st century. By the way, did you know that the south of England might become a new producer of sparkling wines? Due to climate change, not only is the soil changing but also ripening of the grapes and their acidity is affected. One more reason to take climate change seriously. I also learned how to open a champagne bottle properly (turn the bottle, not the cork!), but also that the goal is to make cork coming out of the bottle sound like a gentle kiss (forget about Formula 1 splash) and to avoid overflowing the glass you need to pour a few centiliters to a tilted glass and only then fill the rest. Cheers!

I hope I have enticed you enough. The next Women Entrepreneurial Mission from the Czech Republic to Berlin is scheduled for September. And, mark your agenda! The next GFL Summit 2020 will be on May 12-14.