What do lemons, Empowered Self-Defence and the Czech-Israeli Women Accelerator have in common? 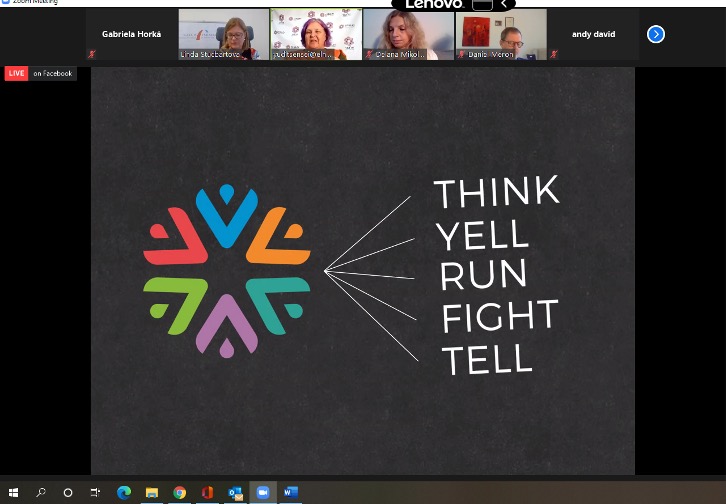 A popular saying in Israel is “When life gives you lemons, make lemonade.”

It is in part thanks to this attitude that Israelis managed to cope with two strict “lockdowns”.

When I wrote the contribution “Coronacrisis: women can help in ways other than just by sewing masks” at the end of spring, I had no idea that I would be writing the second part six months later.

How am I experiencing the second wave in comparison with the first? What has changed with the second wave? How was it possible to transform a business which was based on personal meetings and travel abroad?

In the years 2018 and 2019, I organised two women’s business missions to Israel. At the start of this year, together with the Czech-Israeli Chamber of Commerce, I prepared four specialised missions, in the areas of healthcare and telemedicine, technologies in education, and regional cooperation. I was pleased that a two-year orientation connected with a voluntary yet very demanding performance of the function of a member of the Council of the Czech-Israeli Chamber of Commerce is finally bearing fruit in the form of increased interest in specific projects, topics and cooperation. The missions were initially postponed, but by the end of spring it was clear that we wouldn’t be travelling to Israel this year. At the start of September, I was grateful to have the opportunity to organise, together with the Israeli Embassy, an important meeting of thirty Czech and Israeli women in the residence of the Israeli Embassy in Prague, which was attended by European Commission Vice-President Věra Jourová, and to present Israel from the perspective of a Start-Up Nation. At this meeting, I also presented two new key projects.

The first project is the founding of the Czech-Israeli Women Accelerator, while the second project is devoted to the concept of Empowered Self-Defence. How are these two topics related? Very closely. According to research, women’s businesses and women entrepreneurs were the second most negatively affected group in connection with the pandemic, immediately after single parents. A sad phenomenon accompanying the pandemic is increased violence committed against women and children as a result of curfews. 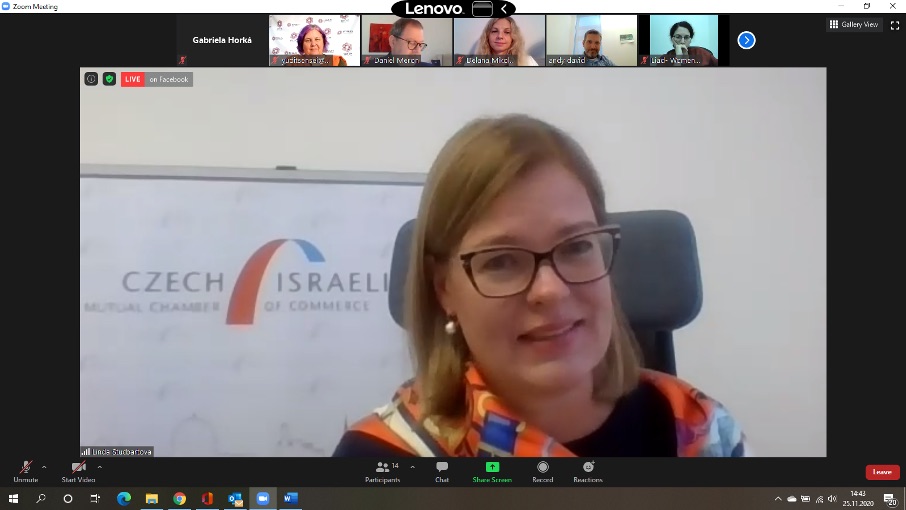 The CIWA project will be ceremonially presented on 25 November 2020. I’d like to take this opportunity to give thanks for their support to the Embassy of Israel, the Cevro Institute and the Czech-Israeli Chamber of Commerce. On the 25th of November, we’ll commemorate the International Day for the Elimination of Violence against Women. I’m glad that even the introductory webinar will link the phenomenon of women’s entrepreneurship with technologies and the social goal of combating violence. I’m happy that it won’t just be a one-time event; through the CIWA project, it will be possible to offer long-term and sustainable support to female students and future entrepreneurs in areas such as the social sphere, the public sphere and security. The connection to high-tech projects from Start-Up Nation can then show the right synergies. The Accelerator has the word “Women” in its name, but its aim is to support overall diversity within the scope of the business environment. I’m pleased that eminent personalities, in both the Czech Republic and Israel, have provided the Accelerator with their patronage.

An important guest within the scope of the introductory webinar will be Yudit Sidikman, founder of the Empowered Self-Defence concept. This unique self-defence concept is based on not only physical abilities, but also communication skills. It places great emphasis on the setting of one’s own boundaries, and the possible prevention of attack. The project is therefore suitable not only for women, but also for children, seniors and persons with disabilities. After all, in Israel, inclusion is not just a motto, but a fundamental concept which is incorporated into everyday life. By the way, this non-profit organisation holds several Israeli and global awards.

Subsequent webinars will be devoted to innovations in large companies. The CIWA project will also include research on the topic of the approach of Czech students to entrepreneurship itself. For the year 2021, we’re preparing a hackathon. We’re looking forward to collaborating with companies from both countries, which will have the opportunity to present and test their solutions within the scope of the Accelerator, or make use of the students’ involvement for challenges relating to specific solutions.

Help and the shift from support for individuals to networking

During the first wave of the pandemic, I was mainly engaged in helping single mothers via the Single Mothers’ Club, and by collecting computers, tablets, mobile phones and eventually clothing as well. With the second wave, I was able to state with relief not that the topic which had so often been the focus of attention was solved, but that large companies fortunately began devoting themselves to this problem within the scope of CSR. As for handing over clothing, I’m pleased that a Fashion Charity Shop was established within the Single Mothers’ Club, which many of my friends and clients from the ranks of top management supported by donating branded clothing. It’s definitely worth your while to visit the website and, when it’s possible, the shop.

I continued with the networking. Thanks to Marie Jehličková, also a member of Rotary Club Prague International, it was possible to link the co-owner of Pražská čokoláda [Prague Chocolates] with hospitals, DSP Hagibor and other organisations in need. I very much appreciate that the company donated its stock to those in need, people who are literally on the front line, whether they’re those who are helping or those who have been left out. If you have unused stocks of suitable items, it’s certainly an inspiration for how to help in the right way just before Christmas.

For DSP Hagibor, I also mediated the handover of VK RespiPro self-sterilising respirators by Respilon, on the day they were launched on the market in the Czech Republic. These masks very clearly demonstrate the interconnectedness of Czech and Israeli applied research. The VK RespiPro is manufactured in Technological Park Brno. Czech know-how in the field of nanotechnology was complemented by an Israeli patent for the use of accelerated copper oxide. It comes from research by Israeli scientist Jeff Gabbay, holder of 35 patents and an advisor to NASA, among others. I’m happy that Jana Zimová, co-owner of Respilon, will also be working within the scope of the CIWA project. As a member of the Board of Commercialisation of Charles University, I hope that there will be more international projects like this one.

What did I learn?

I’m leaving aside all IT solutions and platforms. After all, I still abide by the motto that personal contact isn’t fully replaceable by Zoom calls in the long term. I’ve learned to ask for advice and help. After years of working as a mentor in many programmes, I became a mentee within the scope of the Femme Palette programme for women entrepreneurs. I always look forward to meetings with my mentor, Michal Ptáček of CzechCrunch, as well as the other interesting lectures that this community offers. Just like a large part of the population, I take better care of my physical condition than before. In the spring I conditioned my body with cold water, and now, with decreasing temperature and sunlight, I need “warmer” hobbies, so I became a regular participant in courses organised by the Martial Arts Academy. 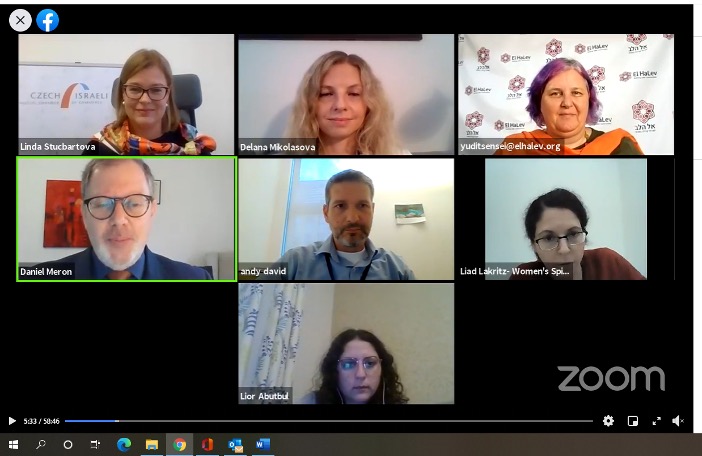 And what do I regret?

The fact that we haven’t learned much from either the first or the second wave. I already wrote in the first article about insufficient support for entrepreneurs, which is key particularly for families where both parents are engaged in business. I myself interviewed the Swiss Ambassador on the topic of effective support for small and medium-sized enterprises. As a parent, I also perceive a small shift in the issue of pupils’ and students’ presence in schools. After all, masks and ventilation aren’t the only way forward. For example, we can be inspired about the importance of various protocols and procedures by Canada, where the government declared open schools a priority. All the more emphasis is placed on meaningful, effective and clear epidemiological procedures. We could have followed Israel’s example far more in the areas of telemedicine, teleworking and utilisation of technological solutions for seniors and persons with disabilities. I firmly believe that we don’t need another wave in order to learn. I still believe that one lesson we cannot take from history is that we’re unteachable.

The Empowered Self-Defence concept consists of five pillars connected with possible responses to an external threat: “Think, shout, run, fight and share”. I went through all of these stages. Thinking about alternatives. Sometimes it even came to shouting, particularly at people who endangered me and my family. I ran away from many projects. I feel that I’m still fighting for my dreams and a better society. And that’s why I’m sharing with you. Whatever situation we’re in, we always have a choice.