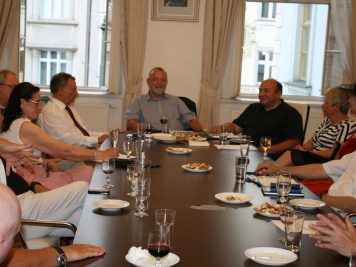 With great interest, members and friends of the Czechoslovak Foreign Institute listened to the information from the Czech Republic’s Ambassador to the U.S.A., H.E. Hynek Kmoníček on current Czech-US relations as well as on changes within the United States 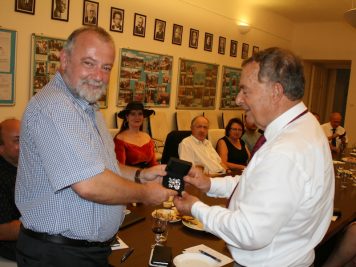 At the end of the talk, the chairman of the Czechoslovak Foreign Institute Jaromír Šlápota handed over the commemorative Silver Lion to Ambassador H. E. Hynek Kmoníček 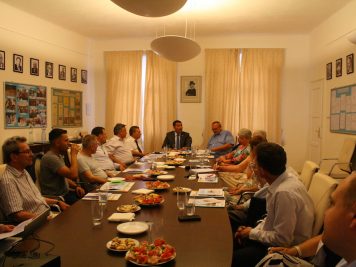 Kazakhstan’s Ambassador to the Czech Republic H. E. Serzhan Abdykarimov spoke about changes in Kazakhstan within this year with the members and friends of the Czechoslovak Foreign Institute 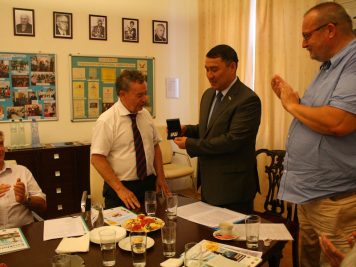 At the end of the talk, the chairman of the Czechoslovak For- eign Institute Jaromír Šlápota handed over the commemora- tive Silver Lion to Ambassador H. E. Serzhan Abdykarim

He has substantiated his claim with a variety of data that are not well known in the Czech Republic. For example, Czech products occupied 25 percent of the US market for ultralight aircraft, or 60 percent of the market with explosives. Czech antivirus firms placed in the top three positions in the US market. CZ-USA, a subsidiary of Česká zbrojovka Uherský Brod (the Czech Armory Company) in Kansas City, which has been active on the US market since 1997, plans to invest two billion crowns in a new factory in Arkansas. Altogether, Czech firms, which operate mostly under English-sounding names, create several thousand jobs in the US, and the governors of individual US states attract other Czech investors to the country with a variety of incentives or tax breaks. According to the ambassador, the current level of relations between the US and the Czech Republic can almost be compared to their level during the First Republic period, and could remain so for some time. In the economy, the US is still number one in the world. “The American economy is in principle blooming,” the ambassador said. Gross domestic product is rising, currently up 2.1 percent, inflation is low and unemployment is at its lowest in fifty years. It seems irrelevant to the economy who is president, the economy is going its own way. On the other hand, the ambassador pointed out that growth in the US economy was slowing gradually after all: GDP growth reached 4.8 percent in the 1960s to the 1980s, and now only 2.1 percent. The reduction is offset by an increase in debt.

“The future of the Czechs in the US is assured,” ambassador Hynek Kmoníček said in another part of the talk. It can be assumed that the number of Czech Americans will grow. Currently, about a hundred thousand Czech Americans, mostly descendants of the emigration wave from the second half of the 19th century, claim Czech origin and relation to the Czech Republic at all. In Texas, about 12,000 people say they speak Czech at home. But the most Czechs are in Nebraska, where they account for 5.5 percent of the population. New Czech schools are also being set up in the US. The condition is that at least 5 Czech-speaking children are taught in them.

Kazakhstan’s ambassador to the Czech Republic, H.E.Serzhan Abdykarimov, informed members and friends of the Czechoslovak Foreign Institute about changes in Kazakhstan within this year at his talk. He called his speech “Kazakhstan between the past and the future”.

He reminded participants of the meeting how Kazakhstan, which spans 2.7 million square km and has a population of more than 18.5 million, has changed over the past nearly 30 years of independence. “It has succeeded in transforming Kazakhstan into a modern state that has been included in a group of the 50 world’s most competitive countries,” he said. Last year, Kazakhstan recorded 4 percent economic growth. GDP, which is 27 percent accounted for by SMEs, has risen from $11 billion in 1993 to $170 billion currently. A National Fund with more than $86 billion has been created to address social-economic problems in crisis situations. Foreign direct investment reached $320 billion. Industrial production is being modernised, digitisation is being introduced, important infrastructure projects are being implemented. 12.5 thousand kilometres of roads, 2.5 thousand kilometres of railways or two modern ports at the Caspian Sea were built. Thanks to the Kazakh program of Nurly Zho and the Chinese initiative of One Belt, one way the transport of goods from China to Europe via Kazakhstan is now four times shorter than shipping, and the country has earned 1.5 billion in sales from transit in the past year. Kazakhstan has gas and oil reserves and is currently the world leader in uranium mining, which is sold under the control of the International Atomic Energy Organization.