Discussions in the Czechoslovak Foreign Institute

In cooperation with Czech & Slovak Leaders

Invitation to the February discussion in the Czechoslovak Foreign Institute was accepted by a personality well known for his wisecracks, humour, and immediacy – by Jaroslav Kubera, the president of the Senate of the Parliament of the Czech Republic. The popular guest touched a variety of topics: global warming, the quality of the work of media, division of today’s society, orientation on nuclear power, the quality of laws. The aim of discussions was not to seek or solve the problems, however, it did not hurt to listen to the half-serious, half-jokingly mentioned possible ways of solution.

The discussion showed that the president of the Senate, as well as other participants, does not find as beneficial manipulative activities of the media, the bias of all sorts of scientific studies, which are based according to who is paying for them, the inability of political groups to carry the electoral defeat and let the winners of the election implement the program for which they were elected, the weakness of the state, the unreasonable amount of legal norms, and many other phenomena in today’s Czech society.

At the invitation by a member of the Institute, Ing. František Hřebík and a member of the Institute’s managing board Hana Hlaváčková, the owner and director of the Mozaika nursery school in Praha – Kunratice, the Ambassador of the People’s Republic of China to the Czech Republic, H. E. Zhang Jianmin came to visit children and their teachers in kindergarten in March, accompanied by six staff-members of the embassy, the chairman of the Czechoslovak Foreign Institute Jaromír Šlápota and other members of the Institute.

Director Hana Hlaváčková showed them the nursery school, which has been in operation for two years, has a capacity of around three dozen children and an experienced six-member teaching staff and is equipped with the latest tools such as the interactive learning devices, musical instruments, toys, the gym and garden-area with two paddling pools for the aquarium with a large turtle. “The kindergarten Mosaic gives its children the basic English language, the correct posture and good behaviour into the life,” summed up Hana Hlaváčková. H. E. Zhang Jianmin then explained to children how their peers are taught in China. The interesting thing was that ways of teaching children of preschool age in the Czech Republic and China are in many ways similar. The guests then surprised the kids with a demonstration of teaching Chinese writing.

At the end of March, the ambassador of Turkey to the Czech Republic, H. E. Ahmet Necati Bigali accepted an invitation to discussion in the Czechoslovak Foreign Institute once again after two years. He explained in particular, how Turkey faces the problems of terrorism and how it affects the policy of the Turkish government and its relations with neighbouring countries. “Between Turkey and the Czech Republic there are good economic relations and we never had problems in political relations,” he said at the introduction, and recalled that the Czech Republic and Turkey are allies, because they are jointly members of the Atlantic Pact, and that diplomatic relations between Turkey and Czechoslovakia existed since 1924, when the Turkish embassy was opened in Prague. In 1949, Turkey was among the founding members of the Council of Europe, in 1952, it joined NATO and 60 years ago, in 1959, it officially expressed interest to join the European Economic Community, with which it is still working. The actual process of adoption into the European Union began in October 2005. Out of the 35 negotiated chapters, so far only 16 have been opened and only one – science and research – was negotiated and concluded. Turkey, however, keeps seeking to join the EU.

In May, the ambassador of the United Arab Emirates (UAE), H.E. Abdulla Mohamed Almaainah spoke about his country in the Czechoslovak Foreign Institute. The main theme of his talk was tolerance. Emirates, considered the heart of the business and financial world, are preparing for the 2020 World Expo and this year is dedicated to tolerance, opening up to other cultures and spreading awareness in that sense. The ambassador mentioned that in the Emirates, members of 200 different nationalities, cultures and religions live in harmony and tolerance. The government of the UAE has taken on the task to build bridges to remove hostility between nations and states. H. E. Abdulla Mohamed Almaainah also spoke about the position of women in the Emirates, which is one of the first Arab countries struggling to overcome gender difference. Out of 32 ministers there are 9 women there and a woman is also the chairperson of the Parliament. 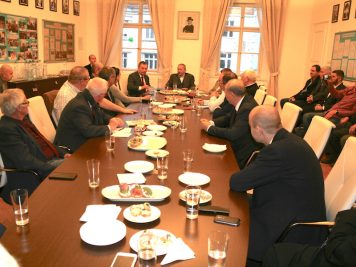 The Chairman of the Senate of the Czech Parliament, Jaroslav Kubera spoke with members and friends of the Czechoslovak Foreign Institute 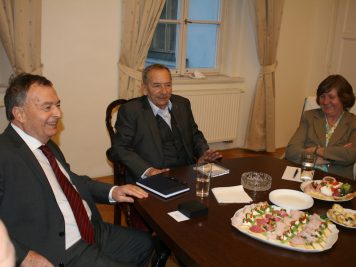 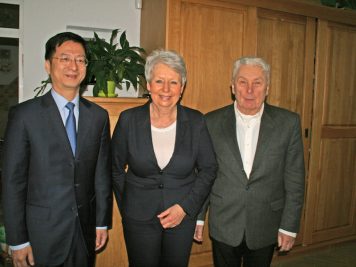 At the invitation by a member of the Institute, Ing. František Hřebík (pictured right), the ambassador of the People’s Republic of China to the Czech Republic, H. E. Zhang Jianmin visited the nursery school whose director is a member of the managing board of the Czechoslovak Foreign Institute – Hana Hlaváčková, in mid-March 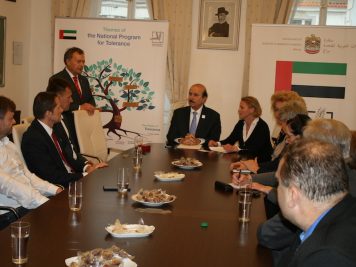 The ambassador of the UAE to the Czech Republic, H. E. Abdulla Mohamed Almaainah spoke about the United Arab Emirates (UAE) at the Czechoslovak Foreign Institute in May 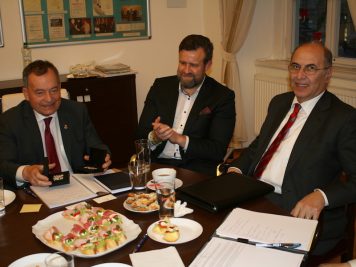 At the end of March, the ambassador of Turkey to the Czech Republic, H. E. Ahmet Necati Bigali spoke about the current situation in Turkey and about the relations of Turkey with neighbouring countries with the members and friends of the Czechoslovak Foreign Institute. Pictured left, the chairman of the Institute Jaromír Šlápota, in the middle is the member of the Institute Jaroslav Kalát, who interpreted the discussion