From the presentation of a book on Czech education in Vienna

On June 24th, the Czechoslovak Foreign Institute presented Vlasta Valešová’s unique book “The Comenius School Association – 150 Years of Czech Education in Vienna”. On the same day, the President of the Republic Miloš Zeman, and Prime Minister Andrej Babiš were introduced to the book.

With the participation of the Chairman of the Chamber of Deputies of the Parliament of the Czech Republic Radek Vondráček, Ambassador of the Czech Republic to Austria JUDr. Ivana Červenková, adviser to the President of the Chamber of Deputies, former Ambassador to Austria and member of the Czechoslovak Foreign Institute Jan Sechter, Special Envoy for Expatriate Affairs, the Ministry of Foreign Affairs Jiří Krátký, Mayor of the Comenius School Association in Vienna Ing. Karel Hanzl and Managing Director of the Association Mgr. Margita Jonas, the members of the Institute and journalists had the opportunity to get acquainted with the book created on the occasion of the 150th anniversary of the founding of the Comenius School Association, created in Austria by Czech compatriots.

The guests were welcomed by Jaromír Šlápota, chairman of the Czechoslovak Foreign Institute, who wished the present all the good and expressed admiration for Ing. Karel Hanzl, who during the last 27 years of his time as Mayor of the Association was able to return its prestige to the Czech school in Vienna. The number of pupils of the Comenius School, from nursery to grammar school, which ends with a school-leaving certificate, was 130 pupils and today it has 530 pupils. “With such people who have an idea of what to do and know how to do it, the Czechoslovak Foreign Institute likes to cooperate. It does not have the means to finance the school’s activities as such, but it contributes to improving the conditions for teaching,” he explained.

Ing. Hanzl thanked for the support and recalled that thanks to the Czechoslovak Foreign Institute the school acquired modern computers and software, so it was very well prepared for online teaching at the time of this year’s coronavirus pandemic. “Now there are people in and around the school for whom it is a heart’s business and they are trying to do their best for the school. As a result, pupils see the school as their institution, they perceive Czech as their second mother tongue,” he said. Compatriots, however, feel that the school is such an important facility that it should be taken care of by the state. The big problem is ensuring regular funding for the school’s operations, which cost around €2.5 million a year.

As a sure success of the efforts made so far to ensure the permanent funding of the Czech Comenius School in Vienna, the Ambassador mentioned its inclusion in the Czech Schools Without Borders system, to which the Czech state has allocated funds that these schools will regularly receive for Czech language teaching. It is therefore a contribution to the financing of one object, that is, only part of the basic operation. But the overall problem is far from being solved. The book presented by representatives of the Comenius School Association in the Czechoslovak Foreign Institute is an opportunity to obtain the missing funds.

Vlasta Valešová’s book “The Comenius School Society – 150 Years of Czech Education in Vienna” bilingual, through the fate of individuals, Czechs who came to work and live in Austria, documents the history of the school from the arrival of Czechs in the middle of the 19th century, through the demise of the Austro-Hungarian monarchy, the First World War, the interwar period, the Second War, the years of coexistence with the regime in Czechoslovakia in 1948–89 till today. The reader will also find a characteristic of the development of relations between individual groups of Czechs in Austria and between Czechoslovakia and Austria.

Radek Vondráček, chairman of the Chamber of Deputies of the Czech Republic, was among the first to get the book. He mentioned during his thanks that he was most impressed by his compatriots in Vienna during his trips abroad. “Compatriots do a lot for relations between nations, more than we politicians can do,” he said. Then he asked for a copy of a book for the President of the Republic Miloš Zeman, to whom he went directly from a presentation at the Czechoslovak Foreign Institute. He then sent a photo of it.

After the presentation, Austrian guests with the Ambassador and the Chairman of the Czechoslovak Foreign Institute went to the seat of the Czech Government, where they also handed over the book to Prime Minister Andrej Babiš. Deputy Foreign Minister JUDr. Martin Smolek PhD. was also present there.

A day later, the presentation of the book took place on the premises of the Brno Regional Office. Governor Bohumil Šimek on that occasion handed over Ing. Karel Hanzl a symbolic cheque for CZK 1 million as an expression of support for the Comenius School Association in Vienna. Senator Prof. Mikuláš Bek and Deputy Minister of Education of the Czech Republic Mgr. Daniel Kubát also attended the ceremony. 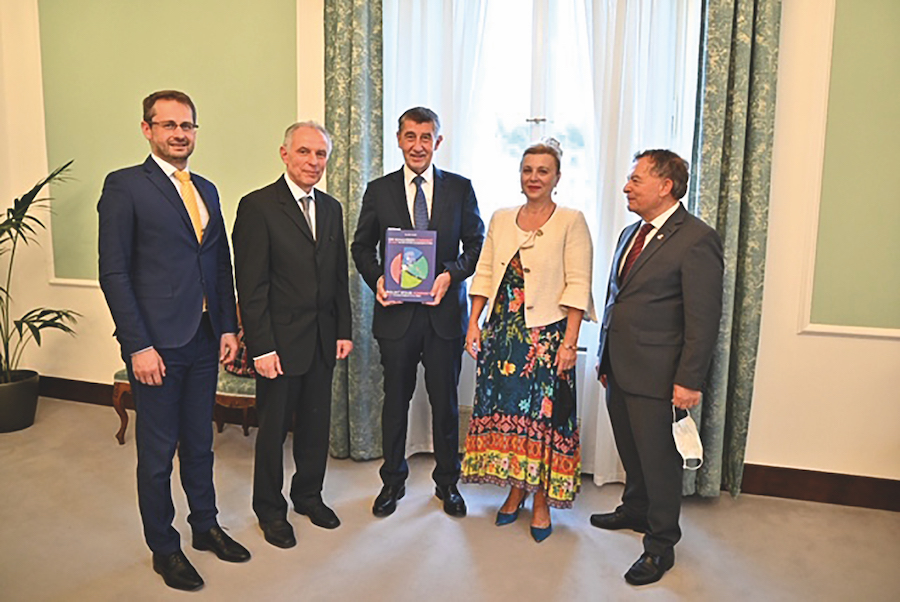 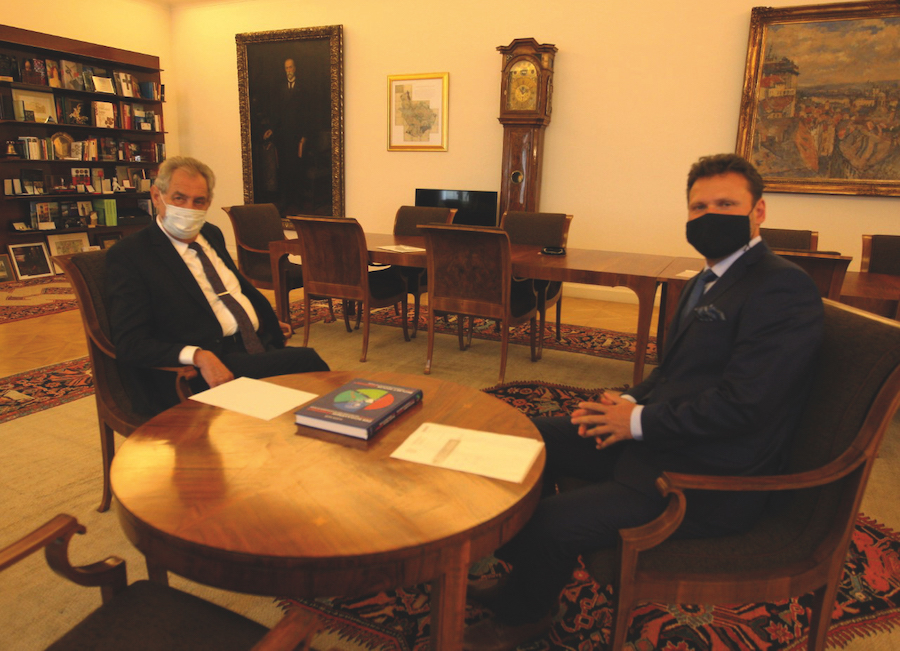 Radek Vondráček, Chairman of the Chamber of Deputies of the Parliament of the Czech Republic, took over one copy of the book for the President of the Republic Miloš Zeman, to whom he left directly from a presentation at the Czechoslovak Foreign Institute 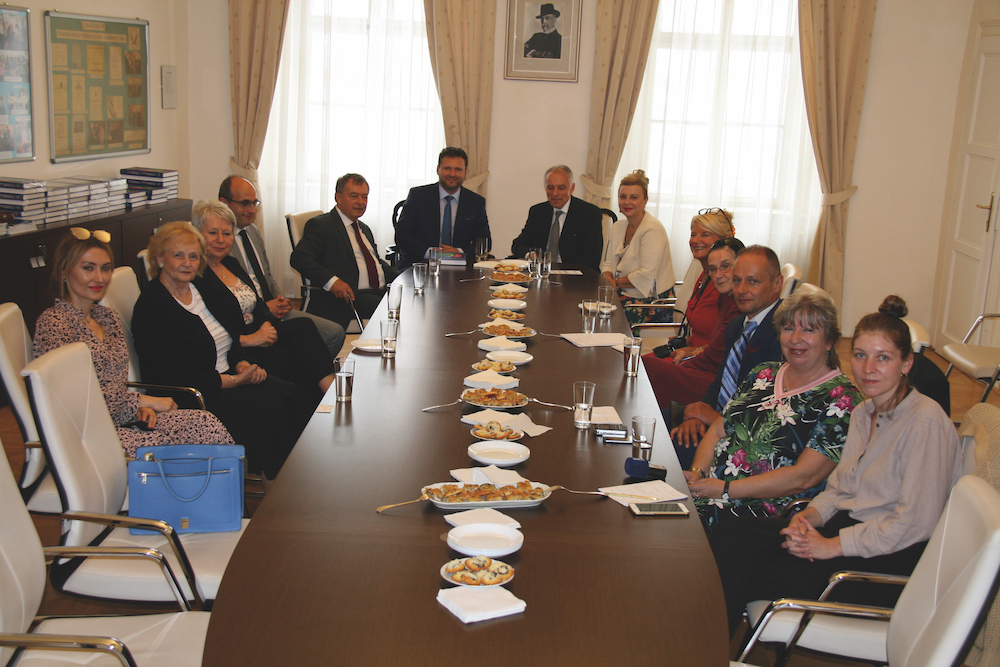 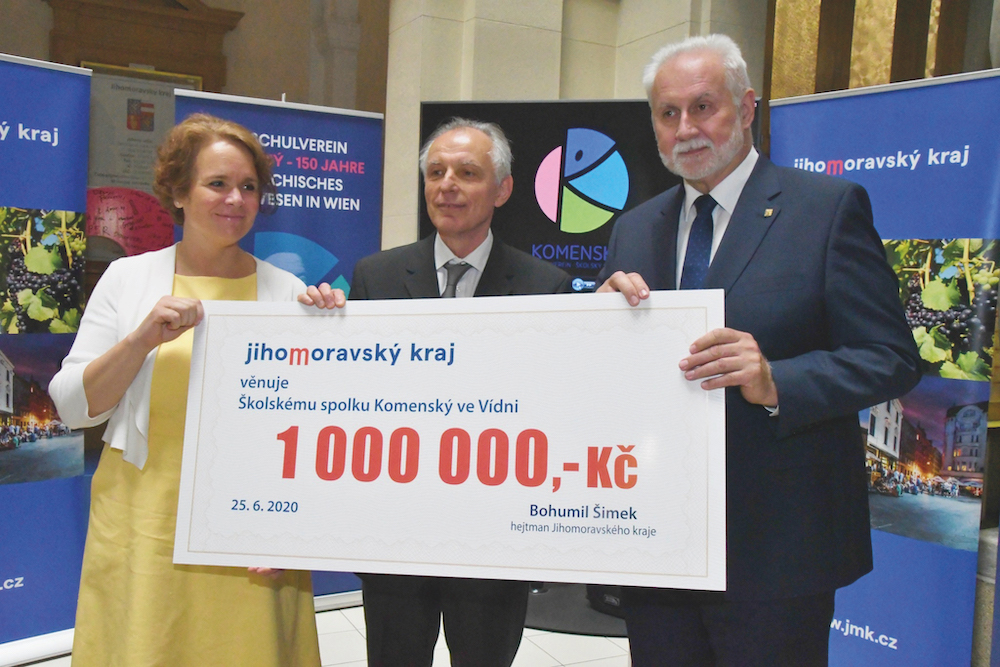 In cooperation with Czech & Slovak Leaders