H. E. Hanane Saadi, Ambassador of the Kingdom of Morocco hosted the traditional Throne Day reception on July 30 marking the 19th anniversary of the date of His Majesty the King Mohammed VI’s accession to the throne. A glorious celebration took place at the Ambassador’s residence in Prague. Among the distinguished guests was Milan Štěch, President of the Senate, Jan Kněžínek, Minister of Justice, Adam Vojtěch, Minister of Health, Czech politicians, academics, celebrities, foreign diplomats and many others.

“The Throne Day symbolizes the constant symbiosis and harmony between the people and the Throne Institution. It is marked by the sacred act of allegiance, which is a binding contract between the King and the Moroccan people. This pact has been well respected through the history of the Moroccan people for close to four centuries.” said H. E. Hanane Saadi, who also pointed in her remarks that Morocco adopted a new constitution which was the clever answer of young Moroccans demanding more dignity and social justice. On the international level Morocco’s commitment to democratic progress and peaceful change has equally extended beyond its borders.

In this auspicious occasion she expressed her satisfaction as to the excellent ties existing between the Kingdom of Morocco and the brotherly Czech Republic.

Indeed, the two countries are celebrating this year the 59th anniversary
of the establishment of their diplomatic relations as both countries have common approaches, both bilaterally and within international and regional organizations, and do share the same universal values of democracy, modernization, and human rights. 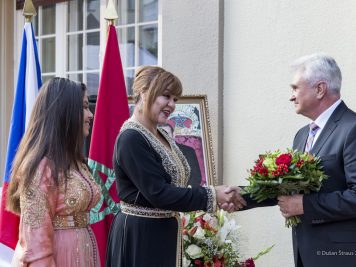 From left: Noor El Assimi, Daughter of Ambassador Saadi, H. E. Hanane Saadi , Ambassador of the Kingdom of Morocco in Prague, and Milan Štěch, President of the Senate of the Parliament of the Czech Republic 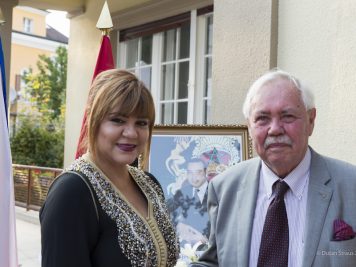 H. E. Hanane Saadi , Ambassador of the Kingdom of Morocco in Prague and Benke Aikell, your Publisher, Czech & Slovak Leaders 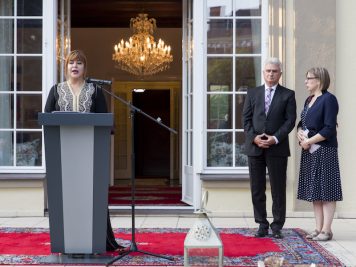 From left: H. E. Hanane Saadi , Ambassador of the Kingdom of Morocco in Prague, Milan Štěch, President of the Senate of the Parliament of the Czech Republic, and Daniela Žítková, Interpreter 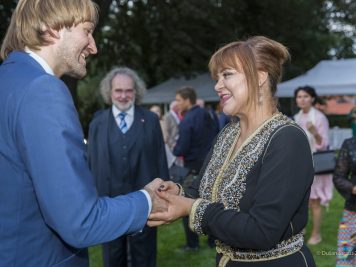 Adam Vojtěch, Minister of Health of the Czech Republic